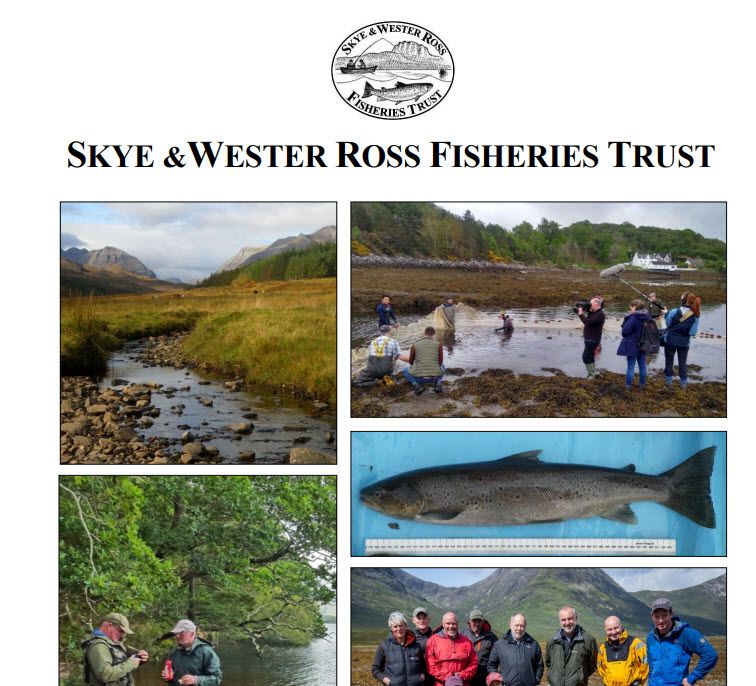 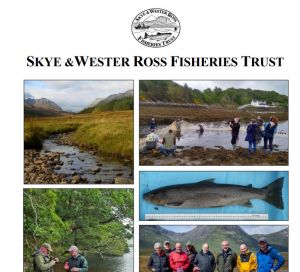 Wester Ross Breakthrough: You can rely on salmon farm critic Don Staniford to highlight anything that attacks the salmon farming industry. He recently wrote that the latest review from the Skye and Wester Ross Fisheries Trust provides further evidence that wild fish can be adversely affected by salmon farming operations located tens of kilometres away.

Unfortunately, Don missed the one absolutely fundamental breakthrough acknowledgement that appears within this report. In fact, I suspect that most people would miss the admission that appears in section 6.3 of the report. This concerns a revived Loch Maree fisheries restoration programme.

The report reads that ‘the collapse of sea trout stocks in Wester Ross led to much research and discussion. From the early 1990s attention focused on sea lice epizootics associated with the emerging salmon farming industry’.

There was less attention on an increase in trawling within inshore waters around Scotland following the removal of the tree mile limit by the Inshore Fisheries (Scotland) Act in 1984. Fisheries for cod, haddock, plaice, turbot and other white fish enjoyed a few years of bonanza in the late 1980s before they too collapsed with the loss of many jobs in fishing and processing.

This is a first. I have yet to see any wild fish organisation admit that increased trawling in inshore waters following the removal of the three mile limit might have had anything to do with the collapse of west coast sea trout stocks and especially, the collapse of the Loch Maree sea trout fishery.

The authors of this review also mention that since 2014 dredging for scallops in Loch Ewe has been banned and marine life appears to be recovering, despite the continued operation of the farm until now. Rather than explore how such protection from trawling can be extended, they revert to type and attack further salmon farm development.

The angling sector just cannot let go of the fact that salmon farming may not be responsible for the decline of wild fisheries along the west coast and that other factors may be to blame.

The Skye and Wester Ross Fisheries Review contains detailed commentary regarding the impact of salmon farms on wild fish as highlighted by Mr Staniford. I will discuss their conclusions in a forthcoming issue of reLAKSation.

Now genes: In the last issue of reLAKSation I reported how the Keyboard twitterati had criticised me for suggesting that the salmon freed by Storm Ellen were seemingly free of lice despite the impression given by critics that farmed salmon are riddled with these parasites. I was told that the fish were in freshwater and therefore all the lice had dropped off, so I responded saying that anglers appears to relish catching salmon from Scottish rivers that were still carrying lice. Strangely not a word in reply.

Instead, the same very vocal keyboard warrior turned his attention to comments made by one of the salmon companies who said that their brood stock are so similar to wild Scottish salmon that to date it’s not been possible to genetically differentiate them.

In reply, our anonymous twitter expert on all things salmon stated that – “what a load of absolute rubbish. It is possible to genetically differentiate between two runs of wild salmon from the salmon river never mind those Norwegian/Icelandic pharmed things”.

Clearly, Mr Keyboard Warrior has not heard of FASMOP – Focusing Atlantic Salmon Management on Populations, a £1 million project conducted by the Rivers & Fisheries Trusts of Scotland (RAFTS in conjunction with Marine Scotland Science in 2012.

‘The key objective of FASMOP was to define the genetic structure of the locations under investigation in order to determine whether salmon in the area represent distinct breeding population’. Several different river systems were studied.

“The analysis showed that, most sites exhibited weak to no genetic differences from one another, indicating low levels of genetic structuring among these sites with the current markers used”.

Simply put, the researchers didn’t find any genetic differences between salmon taken from different places in the river system.

Now I would like to pre-empt any possible response from our critic who will undoubtedly say that farmed salmon freed from salmon farms over forty years have destroyed the genetic integrity of the wild salmon in the Ayrshire coast rivers and this report confirms what critics have said for years, that farmed salmon have wiped out truly wild fish.

I will therefore look to the east coast rivers which are hundreds of miles from any salmon farm and specifically the River Esks including the North Esk which is probably the most studied salmon river in Scotland. The first line of the executive summary from the Esks report states:

“The analysis showed that, most sites exhibited weak to no genetic differences from one another, indicating low levels of genetic structuring among these sites with the current markers used”.

In other words, the researchers were unable to detect any generic differences between salmon from different parts of the same river and from two adjacent but separate rivers. Perhaps, our keyboard warrior would like to point to the specific work showing the genetic difference between two runs of wild salmon in the same river. In my experience, these keyboard warriors make every attempt to avoid scientific debate and instead resort to hurling abuse at anyone who proffers any scientific argument that questions their narrative.

First, it is worth considering why the FASMOP researchers were unable to detect the expected genetic differences in salmon from Scottish rivers. The reports state that:

“There are two possible reasons for the observed low levels of genetic structuring seen:

There has been much written recently about how stocking doesn’t work as the returns are very low. It is hard to reconcile this view with the ideal that restocked fish have managed to influence the genetic profile so much that there is now no longer any genetic structuring. Either stocking works or it doesn’t. If it doesn’t, then the lack of any genetic structuring Is not due to stocking.

Long- time readers of reLAKSation might remember that I wrote about FASMOP at the time of publication and especially highlighted the second reason given why the researchers were unable to find distinct genetic populations. At the time I was puzzled why this £1 million project had been initiated without adequate testing first. Surely, the researchers should have known before the study began whether the microsatellites studied would give sufficient resolution to identify distinct genetic differences. Seemingly not!

I would be surprised if many of you had heard of the FASMOP report other than in reLAKSation. It seems that this extensive and costly study has been well and truly buried and instead, the farming industry is subjected to continual claims about the how essential it is to protect the fragile genetic profile of wild salmon.

The truth is that this was destroyed long ago, if it ever existed. It is not the genetics that brings back salmon to its home river but a combination of the magnetic position and the smell. In the world of salmon, if any fish get their positioning wrong and they stray into another river, then rather than being a disaster, it is might be positive and it leads to increased mixing of the genes and strengthening of the population.

Track and blame: Campaigner Corin Smith is up in arms. He has obtained a copy of a letter from the Atlantic Salmon Trust to Marine Scotland discussing the west coast tracking project in which it is suggested that the salmon farming industry could cough up £300,000 every year to support the project.

Mr Smith’s anger is because he believes that the AST are selling out to the salmon farming industry rather than address the issues that Mr Smith believes should be addressed. He thinks that this funding proposal is wrong and actually, so do I, but for very different reasons.

The Atlantic Salmon Trust are currently (or not) running the Moray Firth Tracking Project which has only run for one year with a conclusion that about 50% of smolts are lost in freshwater. This year, the project did not get off the ground but there is clearly much work to do before any real conclusions can be drawn. Surely, the AST should focus on this before starting another project.

The Atlantic Salmon Trust have made a great deal of noise about the Moray Firth Tracking Project implying that this is ground-breaking work. However, such tracking projects are not unique. The River Tweed Foundation have been running a tracking project down their river to improve knowledge of smolt survival. The River Tweed researchers managed to track their smolts this year unlike the AST. Smolt mortality was around 58% in 2020 and 2019. The reason for this mortality is unclear.

The River Dee also conducted a tracking project in 2017 and a second one in 2018 which extended the range out into the sea. Losses of smolt have been high and predatory birds are cited as one reason for the loss. The project is ongoing.

The west coast is not without tracking projects. The West Sutherland Fisheries Trust tracked sea trout on the Laxford. This project was in conjunction with the Atlantic Salmon Trust. My understanding is that there was minimal interaction between the sea trout and local salmon farms.

Another tracking study took place along the eastern Irish coast and researchers found that unsurprisingly, salmon smolts left the rivers and headed north along the coast.

Finally, the Skye and Wester Ross Fisheries Trust refer to a tracking project that took place in Loch Torridon during 2018 and 2019 run by Marine Scotland Science.  Seemingly, salmon smolts took some time to find their way out of this complex loch system but once in the outer loch, they quickly headed out to sea. Apparently, the data will take a considerable time to process so any conclusions may not be forthcoming for quite some time yet.

In addition to all these tracking projects, there is an international effort underway to track salmon smolts. Smolttrack, a project funded by NASCO, includes researchers from Denmark, Finland, Sweden, Ireland, England, Spain, and Portugal but not Scotland. Some of the early findings are of a smolt mortality of around 50%, which ties in with some of the findings in Scotland. As yet, the reasons for this mortality from some very diverse rivers is unclear.

Given all these projects, it seems that another one on the west coast might be unnecessary until the findings of the existing projects are analysed and comprehended.

My understanding is that the west coast project might cost £1 million a year over three years. This seems a luxury the wild fish sector can ill afford given that many of the wild fishery organisations are struggling to survive.

One of the objectives of the west coast tracking project is to better understand the migration routes of smolts leaving west coast rivers and whether they pass any salmon farms. Salmon farming is just one of 12 pressures on wild salmon. The Salmon Interactions Working Group have already investigated the interactions between wild fish and salmon farming. Given that so far none of the expensive tracking projects have yet to arrive at any definitive answers, then perhaps, this money would be better spent looking at some of the other pressures instead?

Meanwhile, the papers the Mr Smith has obtained under FOI do not appear to involve any discussion directly with the salmon farming industry. It is unclear whether the farming industry has even agreed to invest in this project. What is interesting in these documents, newly released under the FOI, is that Marine Scotland Science were not convinced of the merits of the Missing Salmon Project, the main thrust of which is the Moray Forth Tracking Project. If they were not convinced by that project then why support a similar project on the west coast?