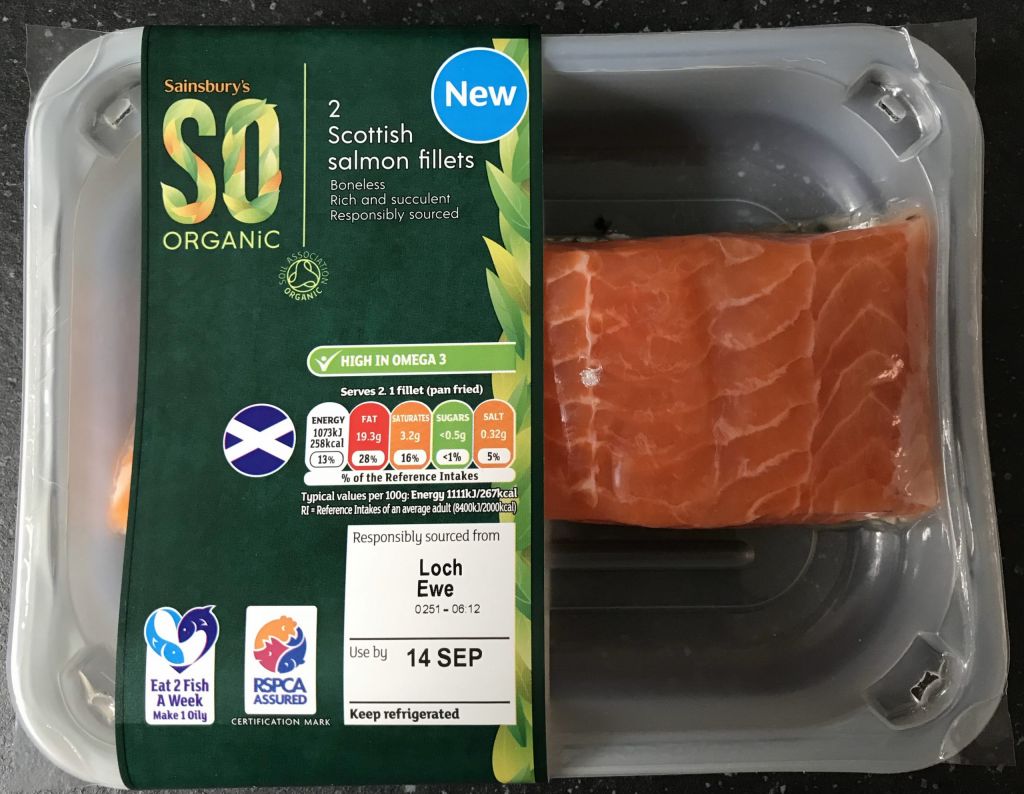 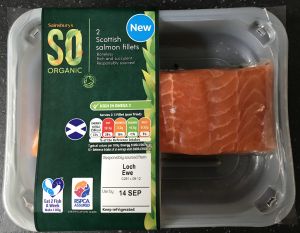 Dam, Dam, Dam: Breaking News – anglers have reportedly caught over sixty of the 48,834 salmon that disappeared from the farm at Carradale during Storm Ellen although Fisheries Management Scotland say in a statement that they believe the number to be an underestimate.

Fisheries Management Scotland have issued a number of statements since Storm Ellen leading to the impression that this is one of the worst events to beset wild fish populations. The Scotsman newspaper warned that these fish pose a major threat to Scotland’s already declining native salmon populations due to concerns that the fish could breed with wild fish.  Polly Burns, FMS’s new aquaculture interaction manager stressed the risks that these fish pose to the genetic integrity of the wild fish adding that anglers must be clear about what they should do if they should catch one of the fish. Farmed fish are most usually distinguishable by damaged fins.

Pictures of some of the sixty fish have been posted on social media. One of the usual keyboard warriors has written that given the short time that fish have been free, they have healed remarkably well! However, those taking the photos of the fish have pointed to the dorsal fins to illustrate the farmed origins.

Interestingly, FMS have taken the description of how to identify a fish of farmed origin from the Scottish Government website. These include deformed or shortened, fins, gill covers or snout and heavy pigmentation. However, what does not seem to have been stressed is that these fish can be classed as of farmed origin if they exhibit two or more of these characteristics. Some of the photos do not appear to show two such characteristics.

I should not be surprised by all the efforts FMS are currently pursuing to track these few fish in this small part of Scotland because it means that they deflect attention away from some of the other issues affecting wild salmon. The fish freed by Storm Ellen will have no impact at all on the majority of wild salmon fisheries around Scotland and only minimal impact within the aquaculture zone. Fish numbers continue to decline along the east coast where there are no salmon farms and where other issues seems to have been ignored.

I have just posted another video on You Tube  https://youtu.be/h5w5vxBxM_M which concerns one of the other twelve pressures affecting wild salmon as highlighted by the Scottish Government. This is the impact of dams and other barriers to migration. I have been trying to find out how many times FMS raise the issue of barrier mitigation and I struggled to find any. Yet, salmon fishing personality Nene MacKay has stated that some people believe that the impacts of dams and barriers on wild salmon is much greater than the impacts of aquaculture. How many times does the wild fish sector complain about dams in the press? How many Parliamentary inquiries have there been about the impacts of dams? How many interactions group managers are there for dams?

Finally, the wild fish sector’s fixation about salmon farming was apparent last week when the River Dee Salmon Fishery Board posted a video to support their campaign to raise funds to plant trees along the river. The River emerges into the North Sea by Aberdeen on the east coast and although the video was specifically about the Dee  http://www.riverdee.org.uk/news/2020/dee-trust-launches-new-fundraising-video the implication is that their local salmon stocks are impacted by salmon farming.

They only want to raise £5.5 million so no doubt they want to gain as much sympathy as possible!

Fording the mire: Following on from my discussion of the paper by Ford & Myers, I was sent a copy of a report by one of my Norwegian correspondents. This was published by ‘Nofima’, the leading Institute for Applied Research in Fisheries, Aquaculture and Food in 2011 and is titled – A review of the factual basis of interactions between farmed and wild salmon as it applies to salmon lice. In essence, the report reviews the then knowledge and arrives at a conclusion for each of the three sections: population dynamics; Lice interactions and Wild stock management.

Within the section on lice interactions there is a subsection that evaluates some of the research papers that suggest a correlation between an increased level of salmon lice from aquaculture and a decline in wild fish. The first paper discussed is the one by Ford & Myers.

The report’s comments on the paper are as follows:

“Without having gone in detail into the use of the data set and statistics, some weaknesses immediately appear in the summary of Ford & Myers (2008). Although they report a correlation between decline in salmon populations and the occurrence of salmon farms, no causal relationship is documented (no causal factors are isolated). In all analysed instances, control areas (areas without fish farms) are located to the north of areas of intensive aquaculture activity. This is not sound from a statistical perspective (systematic error) as the control and experimental areas should have been located to both the north and south of each other. Not only is this unsound from a statistical perspective, where the choice of controls in the north concurs with the areas that show the lowest declines in wild populations on a global scale, the effect of the location of the areas can in itself have a major effect on the result of the analyses.

A curiosity is the absence of statistical significance in the data for Scotland, where the authors admit that the decline in the salmon population had begun before the presence of intensive aquaculture activity. Nonetheless, they find an ‘increased’ decline on the west coast of Scotland compared to the east coast, which is free of aquaculture activity. This is also an interesting observation given that Urquhart et al. (2010) report on higher infection pressure from parasites on the east coast of Scotland.”

These comments come as absolutely no surprise and confirm my own analysis of their paper. What is of surprise is that Marine Scotland Science have quoted the paper in their summary of the science as published on the Scottish Government website as follows:

“Is there an effect of salmon lice on wild salmon at the population level?

Ford & Myers (2008) compared indices of salmon abundance on the east and west coasts of Scotland together with farm production data. They found a reduction in the catches and counts of salmon on the west coast correlating with increased production of farmed salmon.”

Unfortunately, the summary of science is not attributed to any specific author making it difficult to request clarification how this paper can still be used to justify the impacts of salmon farming on wild fish populations. The summary of the science remains available to view on the Scottish Government website and hence can be interpreted as continued proof that of the impact of salmon farming, when clearly, the paper does not support such claims at all.

The problem is once such papers remain unchallenged, they become increasingly accepted as proof. The paper is cited in the SAMS report commissioned by the Scottish Parliament inquiry. The chapter on sea lice states that:

“However, there is a gradually emerging body of evidence, from studies elsewhere, that sea lice not only have the potential to have a negative effect on wild salmon, but that in many situations this is likely to be the case (Ford & Meyers (and other papers)).”

I have written previously that the SAMS report was flawed in that as an expert document, the section on sea lice was not written by a sea lice expert, but by a fish geneticist.  It is therefore of no surprise that various research papers were cited without any clear validation.

Family links: Sea West News have drawn attention to the publication of a new paper that aims to show that BC salmon farmers are under-counting the number of sea lice on their fish. According to Sea West News, the paper actually demonstrates that the number of naturally occurring sea lice are below government permitted levels.

The paper is titled ‘Bias in self reporting parasite data from the salmon farming industry’ and has very little scientific value as it is just another part of the attempt to pressure the Federal Government into removing salmon farms from around the Discovery Islands. The work was carried out in 2017 but has only just been published. Data from 2011 to 2016 was compared to audited counts by the Department of Fisheries and Oceans. The researchers developed a unique model to arrive at their findings. The BC Salmon Farmers Association have described the report as faulty as it doesn’t represent what is actually happening with sea lice. They say that the problem is with the model created for this study. This is not surprising. Most models are built using a variety of assumptions. Invariably, most models involving salmon farming are based on negative preconceptions rather than an open mind. There are four researchers listed in this study, the lead of which undertook the work towards his thesis. The four authors are listed as coming from different universities but two of the authors also list an affiliation to the Salmon Coast Research Station, which is of course was established and run by Alexandra Morton. Martin Krkosek was the first graduate student hosted by Ms Morton. His involvement with research against salmon farming goes back many years. Both he and Andrew Bateman are listed as directors of Salmon Coast. It might be suggested they are not exactly impartial in whether salmon farming has any impacts of wild salmon.

Martin Krkosek’s career has not been without controversy. It was his work that alerted independent researcher Vivian Krause to investigate the ways that the consumers were being influenced against farmed salmon. According to her blog, researchers funded by David Suzuki Foundation failed to measure sea lice levels at farms highlighted in the study. They also failed to notice that there were no fish on the farm during part of the study period in 2003. In a subsequent testimony to a hearing of the BC Government, lead researcher Martin Krkosek admitted that all the findings were correlative and did not show causality.

Dr Krkosek was also the lead author of a letter in the Journal of fish Diseases in 2014 which criticised the work of Dave Jackson and others relating to mortality of smolt release trials. Dr Jackson’s major study found mortality due to sea lice was around 1%. Martin Krkosek had conducted a meta-analysis on the data and produced different results but as Dave Jackson later pointed out that such meta-analyses may be suitable approach for summaries of data but not for the raw data itself.

Martin Krkosek’s association with the latest research is not unexpected.

In my previous commentary about Ford & Myers, I alluded to a connection to this discussion. When I first encountered the Ford paper, I looked for her other research activities. It seems her research activities lasted for a relatively short time between 2008 and 2011.  Her other main collaborators aside from Ransom Myers were Martin Krkosek and Alexandra Morton! 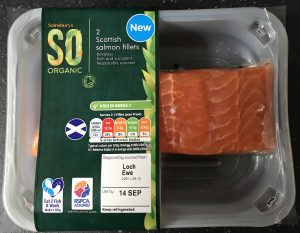 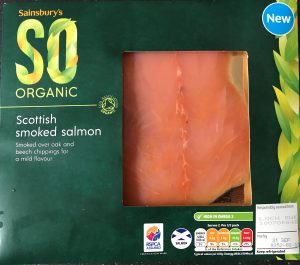 The angling sector have for many years blamed the farm for the decline of wild fish in the Ewe System. The closure means that there will be no salmon farming anywhere in the vicinity and thus presents a unique opportunity to study the recovery of the Ewe System is detail. Yet, no-one from the wild fish sector or Marine Scotland Science has proposed any such study. Instead, £750,000 has been allocated to conduct yet another tracking study of migrating smolts. This will not help measure the impact of salmon farming on wild stocks. I can only assume that there is some reluctance to undertake any evaluation of Ewe System fish stocks because there is every likelihood that fish stocks wont recover and thus that would immediately undermine their claims that salmon farming is the cause of wild fish declines in west coast rivers.