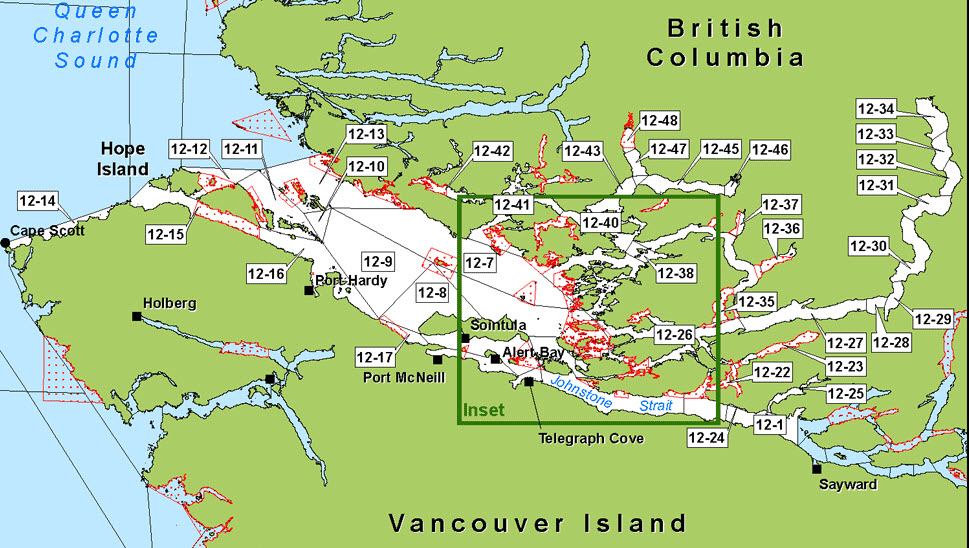 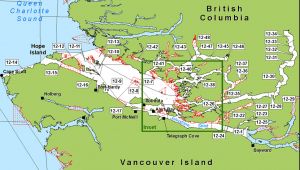 Another Milestone:  Salmon farm critic Alexandra Morton has admitted on her Facebook page that migrating salmon from the Campbell River and therefore also from the Fraser River are safe from the impact of sea lice. This claim came just days after she had posted a video demanding that migrating Sockeye should be protected from sea lice, which she said comes from salmon farms across British Columbia. She excludes the Broughton Archipelago as salmon farms there had been removed with a positive impact on young salmon.

This is very confusing because back in June, Alexandra Morton released selected details of her latest findings showing that 94% of wild salmon fry around the Discovery Islands to the east of the Campbell River had sea lice attached. At the time, she joined with the Namgis First Nations to demand an end to ocean-based farming. Unfortunately, her full report has yet to be published.

Her latest revelations come in a Facebook chat with a registered professional biologist. Ms Morton had referred to a report from Idaho in the US concerning attempts by the Shoshone-Bannock Tribe to save endangered Snake River salmon and commented that she wondered if members of the tribe were aware that Snake River Sockeye were passing through Area 12 – fish farm country and thus exposed to sea lice, PRV and mouth rot. She added that everyone’s fish are swimming through this. 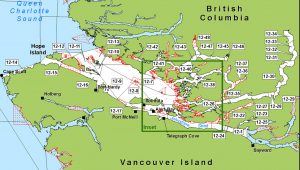 The Shoshone-Bannock Tribe are working to help endangered salmon around Pettit Lake which can be located on the following larger map by the Google marker. The Sockeye salmon migrate down the Snake River into the Columbia River and emerge into the Pacific at Astoria north of Portland. It is unclear why these fish would head into Area 12. 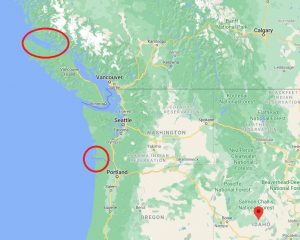 In a previous exchange with this professional biologist, Ms Morton had suggested that the impact of farms is greatest when the young fish are just a couple of centimetres long. This is not the case for fish from the Campbell River as they would be much larger when they reached the ‘fish farm effluent’ near to Port Hardy. The professional biologist pointed out that as Fraser River salmon have even further to travel, they too would be much larger by the time they reached the same location.

In this latest post, this professional biologist suggested that fish from the Snake River would have come even further and therefore would be even larger and therefore be at less risk. Ms Morton answered, ‘from sea lice but not from PRV or mouth rot’.

Guest commentary: Firstly, can I thank everyone who has been in touch regarding the last issue of reLAKSation. I have not had such a response for a very long time, and they were universally of support. It’s only a shame that Mr Graham Stewart was so unwilling to use the offered opportunity to explain why he believes that there is a need for increased regulation of salmon farming.

There is more than one reason why those who criticise the salmon farming industry do so. In the case of Mr Graham Stewart and Salmon & Trout Conservation the reason is about the state of wild salmon and sea trout stocks. Whilst S&TC have reinvented themselves as a conservation organisation their primary aim is to represent the interests of anglers. This is most apparent from their recently launched auction, which is the primary fund-raising event of the year. This current auction consists of 153 lots most of which are for salmon or trout fishing around the UK.

I had a quick look at the first lots listed and noticed something which I considered to be a possible reflection of the actual support for Mr Graham Stewart’s crusade against salmon farming. Scotland is revered for its salmon angling yet just 11% of the lots offer fishing in Scotland. Could it be that river proprietors across Scotland and especially the east coast, no longer feel S&TC are acting in their best interest? After all, at best, salmon farming impacts on just 10% of the wild salmon now caught by anglers.

This follows on from the news that S&TC have been kicked out of the Missing Salmon Alliance due to an unwillingness to work with the other organisations involved. It would seem that Mr Graham Stewart is becoming increasingly isolated, as well as being out of touch.

The main thrust of S&TC’s campaign has revolved around the farm in Loch Ewe which they blame for the collapse of the Loch Maree sea trout fishery. The recent changes to Scottish Government reporting of wild salmon meant that the catch data for the River Ewe was merged with that of two other fishery districts. However, I have now managed to access the returns for 2019 and catches of salmon were slightly up on those of 2018 but what is of concern is that eight of the salmon were killed and kept by anglers. If stocks of wild fish have been so decimated along the west coast, why are the ‘few’ fish remaining not sufficiently valued by anglers to ensure they continue on their way to breed.

I am increasingly ignoring the noise of twitter because it adds nothing to the debate especially when it comes from anonymous critics hiding behind their computer keyboards. However, someone asked me about one specific tweet which stated ‘No link between salmon farming and reduction in wild populations? Suggest you read’ – with a link to a scientific paper.

The reason I mention this is because this is a paper I have written about before in some detail. This is now a few years ago but I believe that it is worth looking at it again.

The paper is of interest because it is quoted on the Scottish Government website in the section about Aquaculture Interactions. There is a page entitled – Summary of the Science. If I remember correctly, this was last updated about five years ago -https://www2.gov.scot/Topics/marine/Salmon-Trout-Coarse/Freshwater/Research/Aqint/troutandlice. It is about the impact of sea lice on wild salmon and sea trout.

This summary consists of a number of questions together with their answers. The section of interest is as follows:

“Is there an effect of salmon lice on wild salmon at the population level?

No empirical information exists on impacts of lice on wild populations of salmon in Scotland. Declines in catches of wild salmon have been steeper on the Scottish west coast than elsewhere in Scotland and Norway (Vøllestad et al. 2009) although the authors stressed that this did not prove a causative link with aquaculture. Ford & Myers (2008) compared indices of salmon abundance on the east and west coasts of Scotland together with farm production data. They found a reduction in the catches and counts of salmon on the west coast correlating with increased production of farmed salmon.”

When the Marine Scotland summary was last updated, I devoted a whole issue of reLAKSation to the two papers mentioned including the one by Ford & Myers. I also asked Marine Scotland to explain how these papers support the view that salmon farming is responsible for a decline in wild catches. I will explain again why I don’t think that they do and would welcome clarification from Marine Scotland why they believe that the Ford & Myers paper provides a viable explanation of events following the introduction of salmon farming to Scotland.

The abstract of the paper states that “Through a meta-analysis of existing data, we show a reduction in survival or abundance of Atlantic salmon in association with increased production of farmed salmon.”. The paper looked at a range of salmon species in a number of different countries, but it is salmon in Scotland that is of specific interest here.

The Scottish data that the authors considered was the total catch data, not just of rods, from east and west coasts fisheries. In addition, they compared data from river counters (usually associated with dams) from both coasts. The west coast data came from two counters and ten counters on the east coast.

The authors produced two graphs to support their findings.

Looking first at the counter data, it is clearly apparent that numbers of salmon going through the counter have been in decline for twenty years before salmon production was even noticeable.  By about 1990, it would seem that counts for both east and west are in decline, almost at the same rate. Thus, from this data, there is absolutely no inference that can be made about the impact of salmon farming on wild salmon counts. The only conclusion that can be drawn is that salmon counts have been in decline since 1960. It would have been interesting to see the counts from the time that the counters were placed because it could be that the dams on which they are located might have had some influence on returning salmon numbers.

The authors of the paper were aware that the counter data was declining prior to the introduction of salmon farming to the west coast. They state that “In regions such as Scotland, where declines precede the start of salmon farming, the strong aquaculture effect estimated reflects a faster decline in exposed populations concurrent with the growth of salmon farming.”

Unfortunately, the second graph showing total catches starts at 1970, ten years later than the counter data.  However, again, catches appear to be in decline from the outset for both coasts. As salmon farming output increases, east coast catches decline even though they are located so far apart. As already quoted, the authors say that the rate of decline is greater on the west coast but visually, there seems little difference. As I am unaware of the exact data they used, it is impossible to recreate exactly the two data sets. However, if the graph is printed out and a parallel ruler applied to the lines, the rate of decline is remarkedly similar. I appreciate that this is not a valid treatment of the data, but it is the best there is for this paper.

What is interesting is that when a similar comparison of the total catch of salmon from each coast was made just three years after publication of the Ford & Myers paper, there was a huge outcry from the wild salmon sector. This was because the decline of catches from both coasts was almost parallel. 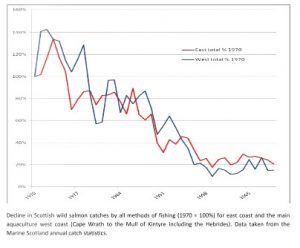 In response, the Rivers & Fisheries Trusts of Scotland (RAFTS) said that such comparison was misleading and that a better comparison would be made using rod catch data only. This in turn is surprising given that when I use rod catch data to demonstrate that salmon farming is not the cause of declines, the data is subject to much criticism.

What is most interesting is that RAFTS say that the decline in the net fishery prior to 2011 should have resulted in more fishing entering the river and hence catches would have been greater. What RAFTS do not mention is that when the nets on the Dee were bought out, the rod catch did not improve, In, fact it fell. This also happened when coastal netting was banned in Scotland. Rod catches should have increased but they have not.

Clearly, Ford & Myers fail to demonstrate that salmon farming has had any impact on wild fish stocks in Scotland. However, perhaps the musical property owner from Skye who suggested that everyone should read the Ford & Myers paper to get proof of the negative impact of salmon farming might like to provide his explanation of the data. After all its only science!