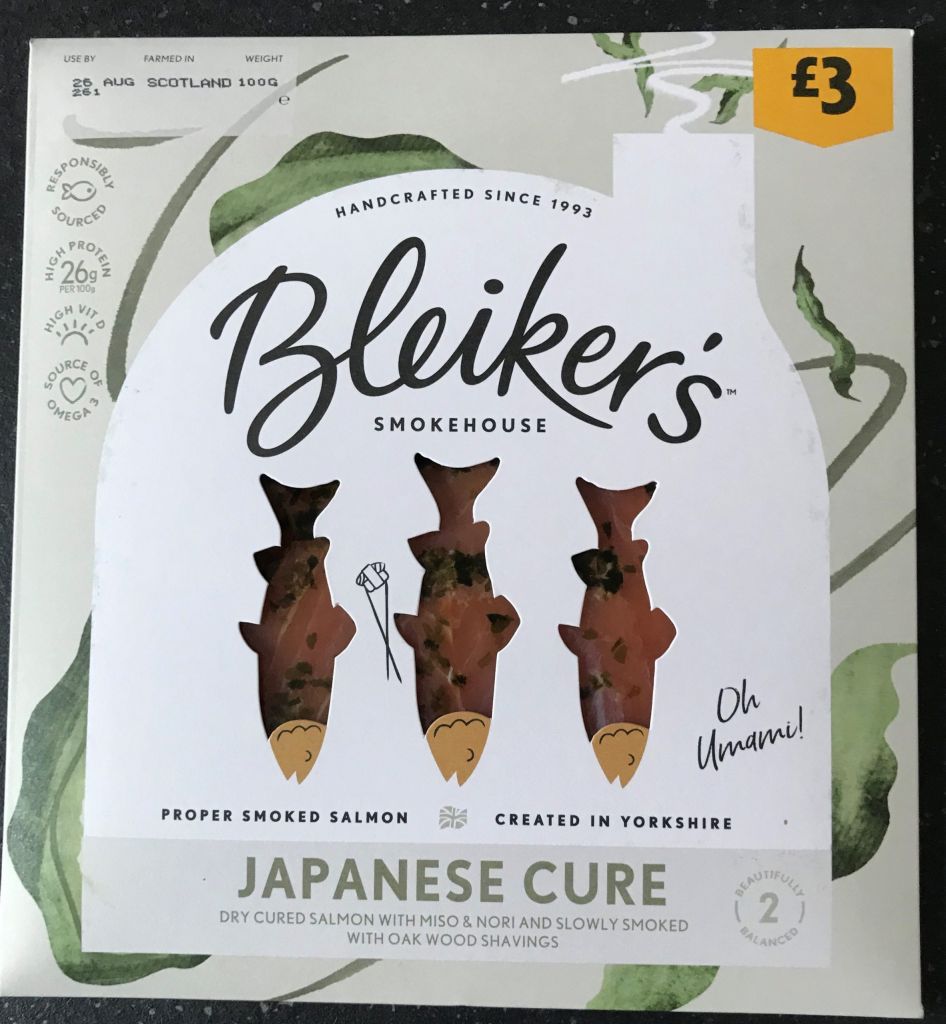 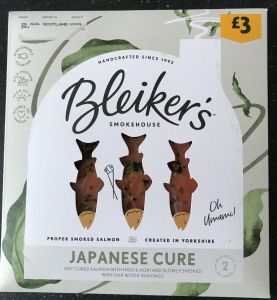 Love is not enough: Intrafish reports that a new consumer-facing seafood brand is to be launched in October. This news was announced on LinkedIn by Hazel Curtis, director of corporate relations at Seafish. According to her announcement, the new initiative aims “to positively influence people’s attitudes towards seafood”. Intrafish expanded on this statement saying that Seafish’s “aspiration is to educate and encourage people not only about the benefits of eating fish but to address controversial issues such as plastics, litter in the oceans, sustainability and carbon footprint to empower consumers to make informed choices”.

However, whilst Intrafish points out that Seafish is tasked with increasing the current UK consumption of fish, currently only 33% of the UK population eat the recommended two portions of fish per week, one of which should be oily. This is because home consumption of fish and seafood is in decline and so far, previous initiatives such as ‘Fish is the Dish’ and ‘Seafood Week’ have failed to reverse this downward trend. In fact, the past chairman of the Seafood 2040 strategy, whose aim is double seafood consumption over the next twenty years privately admitted to a colleague, that they will fail to attain this goal. I think that she is right.

My reasoning is that the aspiration to positively influence people’s attitudes to fish and seafood is simply not enough. Every year, the news is that the latest campaign has been a great success with x million hits on social media etc, yet at the same time, consumption continues to fall. In my opinion, the message is all wrong. People’s attitudes to fish or whether they are aware of fish or how many jobs are in the sector do not seem to influence how much fish and seafood the public actually eat and whether they can be persuaded to eat more. In my view, nothing else really matters.

I think that the problem is compounded by the fact that fish consumption covers a whole range of sectors and products ranging from tinned tuna at lunch and fish and chips brought in or heated up from the freezer. In addition, much of this fish is imported.

I would argue that any strategy to increase fish consumption should also look to bring about a greater use of locally caught (and farmed) fish and seafood. The Seafood 2040 strategy agrees that more should be done to maximise the value and consumption of the domestic catch.

In my opinion, any strategy to get people to eat more fish and seafood should focus on locally produced fresh and chilled fish for home consumption. It is easy to see that the longer we wait, the more difficult this will become. As consumption has declined, so has the variety of fish offered and the number of outlets from where it can be purchased. I have written before about the closure of supermarket fish counters and the reduction of ranges as shoppers turn to smaller local convenience stores instead of visiting their superstore. Even the number of independent fishmongers has fallen. Such trends need to be reversed, and urgently.

Covid has shown that home consumption patterns can change, however I believe that as life returns to ‘normal’ and people venture out from lockdown, old patterns of consumption will return. It is one thing to cook from scratch when working from home or on furlough but as lives become busier, it is unlikely such patterns will be sustained in future and whilst sales of some species have recently increased as a consequence of Covid, the growth has not been spectacular. Something more will be needed.

I don’t think its now enough to tell people to eat more fish. I think we need to hold their hand and persuade them to eat more fish. In fact, I think we need to limit their choice. This is something I have considered for some time and long before the current crisis. Lat year, I made a suggestion that perhaps instead of spending £800k on the new campaign, the money could be spent on giving out a voucher for a free McDonald’s Filet-o-Fish and that this would boost consumption more than might the proposed new campaign. Certainly, a campaign that includes marine litter, sustainability and carbon footprint is not going to get people to eat more fish. In fact, raising such issues might actually deter people from eating fish altogether. I would argue that one of the reasons for the decline in fish consumption over the last decade has been the increased discussion about sustainability. The pressure from WWF and the MSC on the seafood supply chain has meant that companies have promoted sustainability rather than tell consumers that the reason they should buy their products was simply that they were good to eat. I don’t think consumers stopped buying fish because of sustainability but rather that the sustainability message was a big turn off.

Equally, we could give free fish away at retail but I suspect that those who would most avail themselves of such an offer would be those who already buy and eat fish and whilst getting existing consumers to eat more fish would be one way to boost consumption, the real challenge would be to get those who don’t eat fish to start doing so.

Whilst it is easy to be a critic, it is not so easy to come up with an alternative plan. My view was that if we could get the public, or initially parts of the public, to try eating different fish and seafood dishes, this may translate into a willingness to try similar dishes at home. My thought, at least prior to Covid, was to work with government agencies and through them reach out to their employees or customers. The idea was simple. To develop a Fish on Friday promotion in government run canteens and dining rooms, whether in the Palace of Westminster, the local tax office or the army barracks. Instead of the usual offering, those eating in a canteen would be offered a choice of four fish dishes, such as fish and chips, fish pie, fish curry and fish tacos with one vegetarian option. Along with the food, information about the fish and how to cook it would be readily available to take home. This would be repeated every Friday using different dishes in the hope that fish become a familiar choice. The image of these easy to cook dishes could be enhanced if they were curated by different celebrity chefs. The point would be to make a big fuss about the promotion, making it interesting and desirable.

However, this would be only part of the promotion. The other half of the promotion would be that the fish used would be those species which are lesser known, less desirable and more cost effective. Species such as ling, which is tasty, but largely unknown among UK consumers would be caught and landed and bought up by the Government through an intervention scheme that guaranteed a minimum price as an incentive for fishermen to land them. The dishes selected could be made from any of the species landed with the variety enhancing the promotion.

The problem is that the fish and seafood sector are so entrenched in their current practices that they cannot see out of the box. Instead, we have seen more of the traditional types of campaign. I have written before about the ‘Sea For Yourself’ campaign that has been running during the Covid crisis. This too aimed to boost fish and seafood consumption and it will be interesting to see in a few months’ time when data is available whether it achieved its aims. What I understand to be the final promotion is running as a sponsored link in the on-line Times newspaper. This is titled Blue sea thinking: how to get the freshest seafood delivered to your home. This highlights companies delivering to the South West, the South East, London, Yorkshire and Humberside, Northern Ireland, Scotland and Wales.

Sadly, for those living in Norfolk, Suffolk, the East and West Midlands, Bristol, the North West, Cumbria and the North East, it would seem that fish is off the menu. Bearing in mind that this Defra project is being run in collaboration with Fish is the Dish, it could be argued that why should those living in huge tranches of the country be bothered with fish and seafood when those running this campaign can’t be bothered to research a few links for those living across the whole of the UK.

Perplexed: Intrafish reports that one of the most perplexing questions in seafood has finally been answered. They say that it has been long assumed that Americans eat more seafood out than at home, however new research from the John Hopkins Centre for a Livable Future has found that this is not the case. It has been assumed that because 65% of the spending on seafood was in restaurants and other food service outlets that this also applied to volume. Yet, the new study found that 61% of seafood was consumed at home and 39% was eaten out.

As I discussed in the first commentary, part of the problem is because seafood consumption covers a wide range of products and product types and also prices. Clearly products such as canned tuna are cheap and mostly eaten at home. Salmon is also eaten mostly at home and can be bought as fresh, canned or frozen.  By comparison, crab and shrimp are more likely to be eaten as restaurant dishes which cost consumers more because they are paying a premium to have them prepared and cooked.

What is most surprising about the new report is that the as the fish and seafood was measured as cooked weight the capita consumption is much less than the official NOAA data which uses raw edible weights. The study reports consumption of 11.7 lbs per person compared to the 15.3 lbs from the long-term data.

What the report doesn’t mention is that the difference between out of home and home consumption probably relates to where consumers live. Large conurbations are likely to offer a wide range of choices and thus more opportunities for consumers to eat a wide variety of fish and seafood out, whilst those living in more rural areas and small towns will have much less choice for eating out.

Because of the huge variety of products consumed, it would be interesting to see how the patterns of consumption vary if the study were to focus just on raw fish which is prepared and cooked at home or whether home consumption is just about opening cans of tuna.

Smokey taste:  Young’s Seafood have launched a new product in Waitrose under the Hooked Seafood Kitchen brand. This is hot smoked sea bass fillets. The 140g pack was on offer at £3.99 but has now reverted to full price of £4.99.

This smoked sea bass appears to be something of a love hate product. I have seen 5 reviews of which three hated it and two absolutely loved it.

Our taste panel was underwhelmed. There was a slight smokey taste and the fish was very firm to eat but that is about the best description we could come up with. If this is an alternative to smoked mackerel, then mackerel will win every time. There was nothing much really to like. Based on this product, sea bass is best eaten fresh. 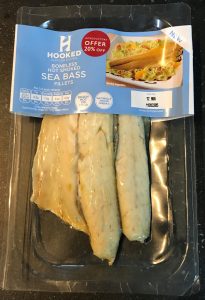 A different smoked choice was available in Morrisons. This is Bleikers Japanese cure smoked salmon. This is described as dry cured salmon with miso and nori slowly smoked with oak wood shavings. Bleikers are based in Yorkshire and highlight this on their pack. The smoked salmon was very nice to eat but the oak smoked makes it very much Yorkshire and not Japan. Any flavour from the miso and nori was completely lost to the smoke. It’s a nice idea but could do with some work. 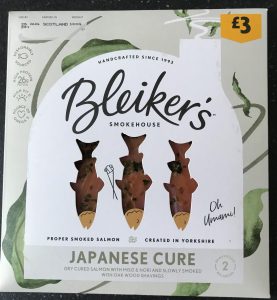 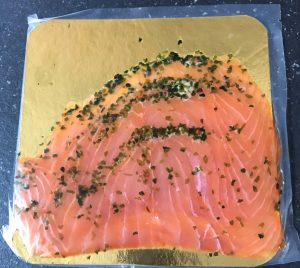