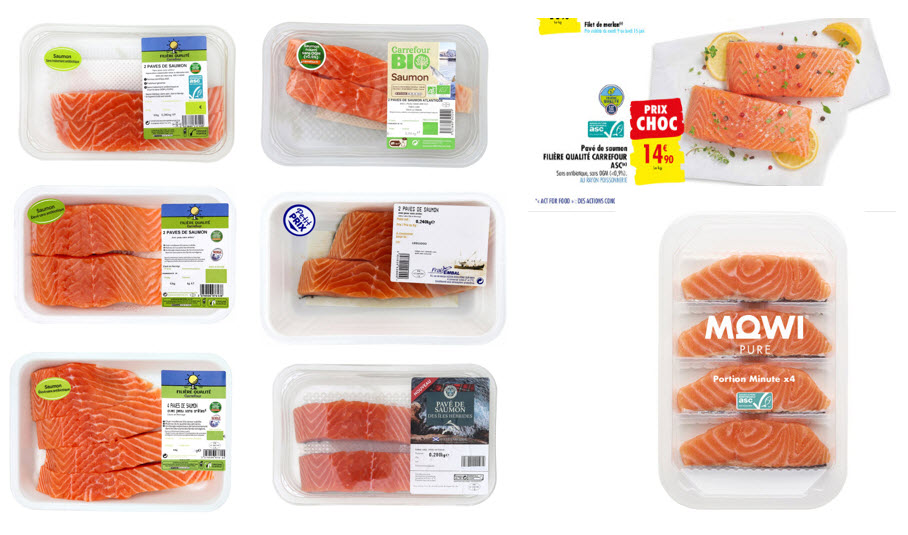 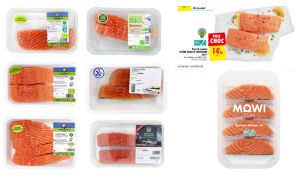 Sixty percent: Fish Farmer magazine reports that the ‘Fathom’ podcast has been told that the UK supermarket chain Morrisons is now selling 60% more British fish than they were before lockdown began.

Sophie Throup, Head of Agriculture, Fisheries & Sustainable sourcing explained that at the outset of the crisis, Morrisons had decided to close their fish counters as the personal contact presented a risk for the retailer. She then explained that as shopping conditions changed, the supermarket decided to spearhead the reintroduction of fresh fish sales placing the emphasis on selling British species. As I have discussed in a previous reLAKSation, one initiative was the production of a ‘British fish box’ although there was no indication of how well it was received by shoppers.

The fish box is still available in stores although I have only seen one or two rather than several at launch. The box has also changed with a reduction in size from 1400 g to 1kg and a price increase from £5 to £6.

What Sophie did tell the podcast was that Morrisons have not altered the range of fish and seafood they sell, but what has changed is the volume. She said that Morrisons are selling 60% more British fish than they do normally with a 1400% increase in sales of Dover sole and an 83% increase in the sales of monkfish. According to Fish Farmer, these sales were characterised as ‘phenomenal’. 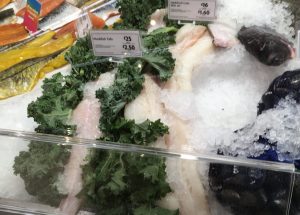 The hosts of the ‘Fathom’ podcast, Paul and Chris responded by saying that ‘Lets hope the new nom is 60% increase in sales of British fish – lets keep going in that direction!’

We can all hope that such increased sales continue but I think it is highly unlikely. It is necessary to listen closely to the podcast in order not to miss the key point about these ‘phenomenal’ sales. Sophie mentions that the ’price investment’ helps. Translated into plain English she means that a half price offer on nearly all fish has helped, and of course it has. Fish consumers have been tempted by 50% discount especially on the more expensive restaurant type fish. I have certainly availed myself of these low prices when I have been in store with a great deal on scallops meaning it has been possible to get a big bag full for a fiver. Sophie says that she hopes that once tempted to buy these species, then they will continue to do so.  However, I do wonder whether consumers may be so willing to pay the full price once the offer ends. I will certainly continue to buy scallops but not as much or as often as I did during the offer, but I was buying scallops before the crisis.

At the beginning of June, the half price promotion ended so the question is whether sales will continue at the same level. I suspect that we will never get to hear.

French fancies: Intrafish reports that Norwegian salmon has received a reputational boost in France. The Norwegian Seafood Council say that after several years of targeted marketing work, the reputation of Norwegian salmon is now much improved. This follows the broadcast of a TV documentary in 2013 featuring anti-salmon farming campaigner Kurt Oddekalv. The documentary was strongly critical of the salmon farming industry and in the days following the broadcast, article after article repeated the claims against the industry. Even the Norwegian Embassy came under pressure about the claims.

Inevitably, the high level of negative coverage did undermine the reputation of Norwegian salmon in the French market. Consequently, sales fell. However, sales did not recover as might be expected. During the intervening years, there has been repeated reference to the Oddekalv effect in France with the suggestion that French consumers have long memories and have been reluctant to increase their consumption of salmon due to its poor reputation.

I have never agreed with this view and have said so in several previous commentaries. Oddekalv was just a blip and for most consumers not a factor in whether they bought salmon or not. Of course, if asked about reputation, consumers might remember the negative messaging, but it was never enough to scare them away from buying salmon.

In a second article in Intrafish, the Norwegian Seafood Council’s analyst Paul T. Aandahl offers a better explanation for supressed sales and one which I have discussed most years since 2013. Rising prices simply made salmon too expensive for an every-day meal choice. At the time, cod was heavily promoted and became the fish of choice. Anyone visiting French supermarkets would have seen the change that higher prices brought to the offering. The choice was greatly reduced.

I started visiting French supermarkets on a regular basis in 2004 and I used to describe fish counters as a sea of pink, so dominant was the salmon offering, yet just over ten years later I was observing fish counters with not a scrap of salmon on display.  The difference could not be more apparent, and it wasn’t just fish counters. The diversity of smoked salmon offering was so great that I remember on my first visit commenting that it could take me a whole day just to record the choice in one store. By 2015-2016, a similar visit took just a few minutes. This was never about reputation and all about price.

The reality was that salmon that had previously been destined for the traditional French market was now being targeted at the Far East and markets that were willing to pay high prices. The supply to France shrunk and the price increased. Consumers looked for cheaper alternatives and this was most likely to be cod, helped by actively promoting on price.

As Paul T. Andahl rightly points out, the loss of French consumers was masked by an increase in overall value. Less fish was being sold but at a higher price. Intrafish say that Norway holds about 75% of the French market but this has not changed much Higher prices also deterred consumers from buying salmon from other origins.

Meanwhile, NSC say that the reputation of Norwegian salmon has improved. The Kantar reputation score has increased to an average of 62 whereas previously, the score has never reached 60.

Strikes and the coronavirus meant that last Christmas was the first time I have failed to visit French supermarkets over the Christmas period as well as Easter this year. I’ve also missed the launch of the new Mowi brand salmon into the French market.

Last month, Undercurrent News reported that Mowi was unveiled at the SIA food fair in Paris at the end of February and the company reported positive feedback on product taste, quality and the Mowi brand story. However, the company said that the retail launch planned for the first quarter of 2020 would be delayed due to Covid 19. Undercurrent News were unable to give a new date for the launch.

Word has it that in fact Mowi salmon is now available in a couple of chains. Data is hard to come by, but I understand that Carrefour has Mowi salmon in stock. Pricing of salmon packs is not always logical across many supermarkets both in France and elsewhere, but Carrefour’s own brand salmon is priced as follows 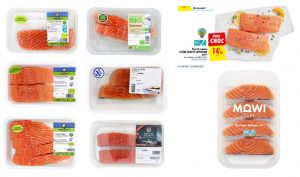 Given that French consumers have demonstrated that price could be an issue, it will be interesting to see how well consumers respond. They have to buy into the whole package rather than the look and price which usually dictates consumer choice.

See for yourself: I was interested to see a tweet from restaurant critic, food writer, author and musician Jay Rayner who had a pink fit when he read the latest article in the government’s Sea For Yourself campaign which appeared in the Guardian newspaper online.

The article stated that ‘if a fish and chip supper is non-negotiable on a Friday night, beer battered dover sole is a delicious alternative to cod’.

I too share Jay Rayner’s frustration about this advice. Whenever I was in Morrison’s during their half price promotions, I never saw Dover sole for sale. It is available from Marks & Spencer at £40/kg. As I have previously suggested this is such a middle-class suggestion. The ‘Sea For Yourself’ campaign is not really aimed at the average consumer and certainly not at those who we should be encouraging to eat more fish. 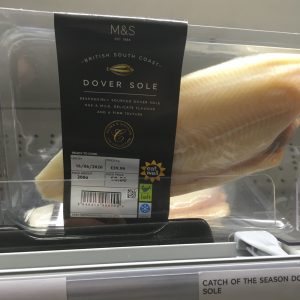 By coincidence, the Chief Executive of Seafish, Marcus Coleman was interviewed in the latest Fathom podcast, He said that ‘Sea For Yourself’ has been the most successful campaign that Seafish has ever run. He said that the campaign was initially intended to promote British fish ahead of Brexit, but it was diverted to respond to the Covid crisis.

Mr Coleman said the campaign initially reached 6 million people, but this has increased to 15-16 million. In addition, there have been 100,000 clicks on the Fish Is the Dish website looking for local retailers. The campaign involved distributing 200,000 stickers which should encourage consumers to search for recipes and more information.

Clicks and looks are all very well. The proof will be in whether there has been an uplift in sales of British species across the UK. Mr Coleman began the interview saying that sales had increased by 60% (actually 56%) in the early part of the crisis but this was during the period when shoppers bought anything and everything to stockpile food at home.

It must be remembered that before the crisis struck, fish consumption at home was in decline. Hopefully, it will have increased during the lockdown but once restaurants and cafés open it is possible that consumers will be quickly tempted away from the chore of home cooking. Only time will tell.

Meanwhile, anyone for Dover sole and chips?

Magwan Bay: You can always depend on the anti-salmon farming critics to make a story out of nothing. Salmon Research (who I shall call Derek) has questioned the location of Magwan Bay. This is despite the fact that it is clear that it is a brand and if he bothered to look he would know that Magwan Bay products include cod, smoked haddock and sea bass. I don’t suppose that Derek would even question the location Magwan Bay if he had seen a pack of their sea bass. 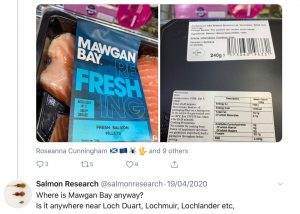 Derek, his fellow keyboard warriors and other salmon farm critics have always claimed that M&S’s Lochmuir was misleading as it implied that the fish came from a loch named Loch muir.  I have often wondered how desperate they must be to believe that this is an issue.

Of course, they would never question other branded items such as Philadelphia cheese which was actually first made in New York. The name Philadelphia was chosen as a brand because the city was considered to be the home of top-quality food.

I wonder what Derek would say about Ben Bracken Scottish whisky sold by Lidl. I doubt very much that it comes from anywhere remotely called Ben Bracken.

Eccles cakes are surprisingly not made in Eccles. Stilton cheese does not come from Stilton and Scottish cheddar certainly doesn’t come from Cheddar.

What is most surprising about Derek is that whilst he uses the tag Salmon research, the one thing that he doesn’t seem to do is any research. He just snipes at anything and everything to do with salmon farming.