Post C-V collapse:  Intrafish report that the UK trade body Seafish has painted a bleak picture of things to come for fish and seafood. In their May update on the impact of Coronavirus on seafood in retail, Seafish have suggested that the severity of the impact on seafood sales will be dictated by the degree of impact that the pandemic has had on personal finances. They say that whilst nobody can predict the future with any certainty, it is probable that seafood shoppers are likely to follow similar behaviours to that which followed the financial crisis of 2007/8. Seafish argue that when personal finances are under pressure, shoppers will trade down to cheaper options or will trade out of seafood altogether into cheaper proteins. If the financial impact of the pandemic is like the events of 2007/8 then sales may decline at an accelerated rate resulting in around a 30% decline in fish and seafood in retail over the next five years. Seafish think that when it comes to chilled seafood, the decline has already begun. This would not be of any surprise.

I personally think that it is too early to make any real judgement. Certainly, Seafish reported significantly increased sales as the UK went into lockdown driven by panic buying especially of frozen products like coated fish and fish fingers. This increase was short lived as shoppers ran out of storage space and stores rationed popular items. The measure will be what has happened to sales throughout May as some form of normality returns to food shopping. However, it is likely that overall sales of chilled fish will have declined, not least because there is less opportunity to buy fish in many stores. In addition, the ranges have been largely reduced.

The question is what will happen to sales in the coming months. If shoppers have less cash, will we see less fish and seafood passing through the supermarket tills? I think that we will see less fish bought from retail for home consumption despite a renewed interest in cooking from scratch at home brought about by the lockdown. However, my view is that this is not part of some Covid 19 hangover or new recession. Instead, this is just part of the continued decline we have seen in retail sales in recent years. The closure of fish counters by Asda and Tesco occurred because not enough shoppers were buying fish. It is unlikely that Covid will convince shoppers to seek those counters that do remain open. The UK public has been losing the connection to fresh and chilled fish and Covid will not change this.

Home consumption of fish and seafood is potentially in terminal decline but what Covid has done is, as I suggested in a previous issue of reLAKSation, to highlight the fragility of the sector. Hopefully, Covid might bring about recognition that something urgently needs to be done to stop the decline, but I am yet to be convinced that the need for change has been recognised.

Currently, DEFRA are working with Seafish on the ‘Sea For Yourself’ campaign. The promotion was supposed to be racked up during May but as yet the only place I have seen the stickers is on the Morrison’s fish box which I discussed in a previous reLAKSation. Not surprisingly this has not proved as popular as expected as I now see just one or two boxes on display rather than several as at launch. The price has also increased from £5 to £6!

The Sea for Yourself campaign has been running a sponsored link on the online version of the times newspaper for several weeks. After some weeks of running a story about an offshore mussel farm, two new ‘articles’ have recently appeared.

The first is about ‘local’ seafood from North Wales and how inshore fishermen are partnering with a local fishmonger, who is serving customers via a seafood club. The idea is to sell local fish. The article says with online ordering and home delivery, everyone can take advantage. The link takes the reader to the ‘Fish is the Dish’ website and encourages them to enter their postcode to find local suppliers and delivery services. This I did only to find that I was offered no suggestions at all. Given that I am based in a major city, this is somewhat surprising. At the same time, it has always been that people who live on the coast, especially around the Llyn peninsula as highlighted in the article always have better access to local fresh seafood. As the article points out, whether they have taken advantage of this is another question.

The second article relates how to produce low effort and high reward fish suppers. In my view, this highlights all that is wrong with the way that fish and seafood is promoted. The campaign has an underlying motive of helping the British fishing industry by encouraging fish consumers to diversify away from the Big Five. However, as consumption of the Big Five most popular species is clearly in decline, what chance is there of persuading shoppers to buy alternative species instead?

The ‘article’ includes the suggestion that ‘for an easy feast, a pile of fresh, steamed brown crabs should be always be served with mayo and bibs’. Later, the article continues with ‘it’s your decision whether to cook a live crab at home, buy it cooked, or just use some picked white and brown meat’

I am not sure that whoever wrote this is really aware of what consumers actually choose to buy and eat. It feels like it was put together by an agency rather than someone who understands the market. The idea of promoting live crab as something different to eating the Big Five is difficult to comprehend. They also say that cooking and serving a fish whole can make a great dish to put in the centre of the table for occasions like a birthday dinner. Most shoppers hate the idea of buying fish with heads and fins which is one reason why salmon fillets have proved such a winner in the marketplace. Will such consumers really be willing to cook a live crab or even dress a cooked one?

I appreciate that this 950-word article was probably written long ago before the current crisis, but it is so out of touch with the current situation and the general state of the market. I am unsure why a new narrative could not have been quickly put together to promote fish consumption to a public caught in lockdown. Surely, a message of why the public should eat fish now would have been much more appropriate than the content of this article currently available on the Times website.

The article reminds me of another attempt to promote fish during lockdown but this time from ‘Seafood From Scotland’. They are running a video supper club in which a restaurateur demonstrates a recipe which can be cooked at home. So far, they have run three but they, like the ‘Sea For Yourself’ article feel a bit too ‘middle class’.

I just think that in this time of Zoom and other online activities, the sector has missed a real opportunity to promote easy to cook, simple, wholesome fish and seafood from easily acquirable ingredients. It is only necessary to look at the success of Joe Wicks’ daily workout on You Tube to see how a regular repeated message might resonate with the public.

Recently, the Great British Menu has been broadcast on BBC TV. For those who haven’t seen the show, the idea is that 32 regional chefs compete to cook a course at a banquet. This year the format was shaken up with the introduction of a host, comedian Susan Calman who brought a breath of fresh air to the programme. Susan would have been the ideal host to introduce a short daily broadcast with each of the chefs cooking a simple fish dish. This could be continued with other celebrities with every episode being available on You Tube. You only need to look at how singer Jesse Ware’s Table Manners podcast has taken off to see how social media could be used to promote fish to the modern consumer. 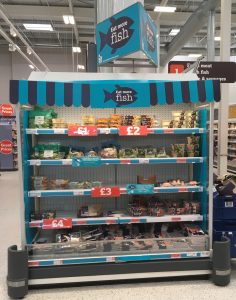 The display carries a mixture of chilled fish, ready meals, and accompaniments to help give shoppers some ideas.  The offering however would not meet the approval of the ‘Sea For Yourself’ campaign as only packs of mackerel fillets are locally caught. Cod loin, Tuna and Sockeye salmon are wild caught and imported. The sea bass is farmed and imported whilst the Scottish salmon fillet is farmed.

My view is that any possible way of increasing fish consumption is welcome whatever the origin or method of production. Hopefully, Sainsbury’s display will encourage some shoppers to dip into fish and seafood when they hadn’t planned to do so. We need to see many more of such endeavours.

In a small way, I have tried to encourage Booths, my local supermarket chain to increase the promotion of their fresh fish. Sometimes, they post a picture of their weekend fish offer on Twitter. This often appears well after the promotion has begun. I have suggested that they tweet much earlier and repeat it rather than post it just once. I also suggested that they post a relevant recipe along with the offer. If shoppers are aware of offers in advance, they can plan meals ahead rather than be surprised once they reach the counter. Equally, shoppers who hadn’t planned to visit the counter might be prompted to do so. I am reminded of Tesco’s catchphrase – every little helps – and would suggest that the sector needs every bit of help it can get. After all, it is Seafish who have expressed concern that retail fish may decline by 30% over the next five years. This just cannot be allowed to happen.