COVID 19: I am mindful that the issues I discuss pale into insignificance compared to the ongoing crisis. However, I have received messages to say that the weekly mailing is a welcome diversion so for the time being, I will continue to send out the reLAKSation viewsletter. Thanks to everyone for your continued interest.

Published: Some years ago, I contacted a number of people in the wild fish sector to ask if I could come and discuss some observations I had made which didn’t seem to match many of the claims made about the impact of salmon framing on wild fish numbers. One of those contacted was a leading Scottish scientist whose response was that I was welcome to come and talk when I had had a paper published!!

I can now report that my paper ‘Concurrent Collapses of Demersal Fish and Sea Trout on Scotland’s West Coast Following the Removal of the ‘Three-Mile Fishing Limit’ has now been published in the journal ‘Aquaculture & Fisheries Studies’ https://researchopenworld.com/concurrent-collapses-of-demersal-fish-and-sea-trout-salmo-trutta-on-scotlands-west-coast-following-the-removal-of-the-three-mile-fishing-limit/

I am sure that the paper will receive much criticism from the wild fish sector and the keyboard warriors. In response, this paper has been peer-reviewed and was researched without support or funding. I would be interested to see if any potential critics are willing to undertake actual research to back their claims instead of just being critical. More likely, the paper, like my book, will be ignored because it doesn’t fit in with the many claims made about the salmon farming industry.

Hopefully, the SSPO will see the benefit of such research and approve funding to further progress my research. At a time when other activities are increasingly restricted, some lines of research would still be possible.

Overblown: One of the keyboard warriors recently tweeted a picture from the US food service company Slade Gorton. The Tweet read “Nice to see farmed salmon labelled as containing ‘salmon, wheat and soy’”. Notwithstanding that the label states: ‘Contains Fish, Wheat, Soy’, the fact is that all the products shown in the photo are added value products such as ‘Fresh Thai Ginger Atlantic Salmon’. The salmon doesn’t contain wheat and soy. These ingredients have been added to the fish to create a different flavour. The intention of this keyboard warrior is to infer that the farmed salmon has been adulterated. However, in his rush to denigrate farmed salmon he missed the label of another product in the photo. This is ‘Lemon Garlic Herb Wild Salmon Burger – wild caught contains Fish, Wheat’. It seems that even wild caught salmon contains wheat, something that this keyboard warrior has missed. In the US, fish products must have a declaration of certain added ingredients. Unfortunately, the wording on the labels on the wild caught cod cakes is too small but I am sure that similar ingredients are also declared. 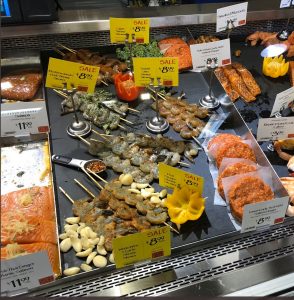 It is a shame that in their rush to attack the salmon farming industry, these keyboard critics don’t bother to check the facts first.

I have also encountered another more serious example of such misinformation being circulated about the salmon farming industry. A couple of weeks ago, anti-salmon farming campaigner Don Staniford reported that SEPA had finally released their data on mortality and biomass. He highlighted those farms with the highest mortality figures for 2019 but interestingly, I have not heard any further reference to this data since then. Perhaps the data junkies are all still busy trying to interpret the data.

I was reminded that last year there were repeated claims made suggesting that mortality rates regularly exceeded 20%. One example came from Marine Ecologist Dr Sally Campbell who told BBC News said that ‘every year about 9.5 million die in the salmon farms, about 20% of the total.

I have been able to have a quick look at the data and using the examples highlighted by Don Staniford I can make the following observations. In total there are just 12 records where the mortality exceeds 20%. However, to put this into context, there are a total of 4428 records for 2019. This means that just one quarter of one percent of mortalities were over 20% last year. This is very different to the suggestion that 20% of farmed salmon have died.

As usual, the claims made about salmon farming don’t match the reality.

Closed: The River Tweed Commission has issued a statement regarding COVID -19. They rightly say that ‘Until such time as the Coronavirus is under control and subject to any clarification issued by the Governments, we should accept that fishing as an activity is not possible’.

It’s a pity not just for public health but also for the future of salmon, that Fisheries Management Scotland are not more forthright in stating that all fishing should cease during the crisis.

In Norway, the wild fish sector has expressed different concerns about wild salmon. The Norwegian Hunting and Fishing Association have joined with Norwegian Salmon Rivers, Nature Conservation Association, Nature & Youth, WWF, Norwegian Outdoor Life, Sabima, Sacred Wild Salmon and Greenpeace to say that the coronavirus can have a dramatic impact on wild salmon and sea trout.

Their concern is that the Norwegian Government is considering easing restrictions on salmon farms to allow variations in biomass and the reporting of sea lice. Such controls are to help reduce interactions between farm workers and hence the risk of spreading the virus.

These organisations are worried that reduced reporting of sea lice will increase the number of lice in the pens and hence increase the risk to wild salmon and sea trout. Sadly, these organisations fail to recognise that the current outbreak will do more to safeguard the future of wild salmon and sea trout than put them at risk. The threat to wild fish from sea lice from salmon farms is low compared to the risk of mortality from fishing. Anglers kill far more fish then die from catching sea lice from salmon farms. As in Scotland, the best way to protect and safeguard wild fish populations is to stop fishing for them.

What is most interesting about these concerns is that Greenpeace, WWF and Nature Conservation Groups have joined with anglers to argue for the protection of wild salmon. Seemingly, they are only concerned about protecting them from salmon farmers, not from anglers!

In Scotland, SEPA have also eased regulations on salmon farmers provoking the usual outcry from the Keyboard Warriors. One says that all this will do is forced diseased fish into the supply chain whilst ‘Salmon Research’ has posted on Twitter that everyone should now stop eating farmed salmon because they might be eating diseased or disfigured fish.

As usual, such claims are made without any evidence or foundation.

Hot water: Seafood News highlighted a report from Memorial University’s Marine Institute regarding the death of an estimated 2.6 million salmon last year at a farm in Eastern Canada run by Northern Harvest. The farm had ten cages, six of which suffered a total mortality with the other four suffering mortality of between 33 and 50 percent.

Claims that the mortality was due to sea lice or disease have been dismissed by the academic research team who concluded that that high-water temperatures and reduced oxygen levels caused the fish to die from asphyxiation. Some of the fish were already stressed because of routine treatments and handling.

This report is a timely reminder that it is all too easy to blame sea lice and disease when rapidly changing natural conditions, which are effectively invisible to onlookers can be the cause of fish deaths. This was very much the case in Scotland when wild fish died in a shallow sea pool leading up to the Blackwater river, but the blame was ascribed to a local salmon farm which subsequently suffered from an outbreak of sea lice. The fact that the wild salmon were trapped in a warming pool seems to have been totally ignored.

Money: Salmon farming critic Don Staniford has been making much of the fact that salaries of senior Mowi executives have been published. He says that they have raked in the millions as tens of millions of salmon have suffered a cruel death.

As I have already pointed out in this issue of reLAKSation, the claims that millions of salmon have died in salmon farms are not substantiated by the SEPA data. However, of more interest, whilst Mowi is transparent about how much the company pays its staff, Mr Staniford has always been extremely reluctant to publish how he is funded and who by. Unfortunately, he is unwilling to match the transparency that he demands from the salmon farming industry.