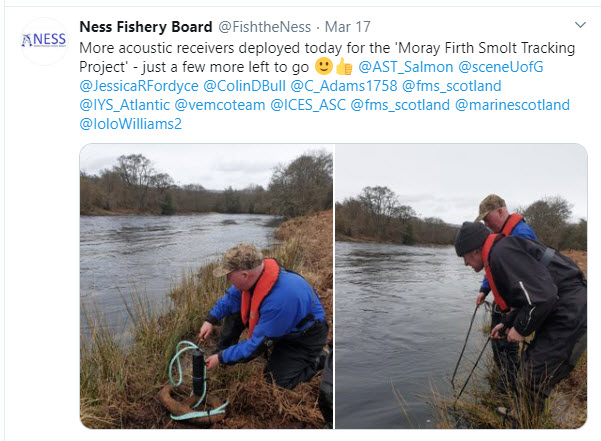 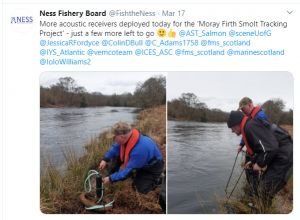 Troubling Times: These are indeed worrying times. Life as we know it may change for ever.  People’s livelihoods are disappearing.  No-one seems to know what the future will bring. The news is all about coronavirus and everything else seems rather irrelevant. Does it matter anymore if there are no wild salmon to catch for sport? And whether salmon farming is the reason why?

As we enter a new phase of the coronavirus outbreak and the public are increasingly confirmed to their homes, I think that those who read reLAKSation may like some diversion from the increasingly worrying impacts of the coronavirus on daily life. I have therefore decided to continue sending out the reLAKSation views letter. I certainly would like to discuss in future issues the effects of the virus on fish consumption and the fish supply chain.

Any comments, views or a wish to say hello are always welcome to relaks@callandermcdowell.co.uk

Breaking news: In these troubled and worrying times, I recently encountered some very good news. Somewhat belatedly, I was sent a SSPO briefing note dated December 2019 outlining the organisation’s achievements. The briefing includes a section on wild fish interactions and contains news that the SSPO are to fund research into the decline of wild fish.

This is fantastic news because during all the ten years that I have self-funded my research into the decline of wild salmonids, including all the research for my book – Loch Maree’s Missing Sea Trout (still available from Amazon) and for my soon to be published peer-reviewed paper, there has been no funding available for this type of research. The nearest I came to obtaining funding was through SARF, but my application was blocked by Marine Scotland Science after they claimed that the data I had planned to use was poor, despite it being data compiled by Marine Science Scotland themselves.

Looking forward, there are still many issues relating to wild fish declines, such as I have previously raised in reLAKSation, that require further investigation. My current resources are already over- stretched so access to external funding would be extremely welcome.

I have written to the SSPO to apply for some of the funding being made available under this new initiative and now await their response. I recognise that this initiative is part of the Big Offer whereby the wild fish sector believe that the salmon farming industry should pay for the alleged damage to wild stocks caused by the salmon farming industry. In January, Alan Wells of Fisheries Management Scotland gave a presentation to the Roundtable event at the Scottish Parliament which ended with the following statement:

That is investment of a proportion of any profits generated by the salmon farming industry otherwise referred to as Blood Money. However, if such funding is going ahead, I would argue that all the eggs should not be put into one basket. So far, the wild fish sector has a poor record of preventing the decline to wild fish populations. It would make a lot of sense to spread the funding about to help speed up the search for a solution. Regular readers of reLAKSation will know that I have drawn attention to the removal of the three-mile limit, seismic surveys, pre-farming declines and in addition there are a couple of other issues that I haven’t yet publicised, all of which need further investigation.

By comparison, whilst  there is now an admission by some in the wild fish sector that  the declines are likely due to a combination of several different factors,  the consensus is still that salmon farming is the main reason why wild fish are in decline. This is why £750,000 is being invested to track wild fish along the west coast. This makes no sense. especially as I have repeatedly pointed out, west coast catches account for less than 10% of the total Scottish catch.

Some of the thinking about this project is to prove once and for all that salmon farming is responsible for wild fish declines. The east coast tracking project showed that 60% of smolts died during the freshwater phase. The expectation from those planning the new project is that predation in freshwater will be much less on the west coast. This would not be surprising since west coast rivers are much shorter than those on the east coast and therefore there will be much less opportunity for predation of the fish whilst in the rivers. If the study finds for example a split off 30% in freshwater and 70% in the sea compared with 60/40 on the east coast then, the difference will be put down to the presence of salmon farms regardless of the fact that large numbers of predators usually congregate at the river mouths during the smolt run.

Whilst I have a list of issues to investigate, I have heard little of the wild fish sectors plans to research the reason why wild fish are in decline. Instead, as Alan Wells highlighted at the January event at the Scottish Parliament, there is more interest in protecting and improving existing stocks. Currently, the main plan is to plant trees to shade rivers to prevent high water temperatures.

In addition, the wild sector is focused on tracking projects to try to identify where problems occur in rivers or close to shore. Just this week, the Ness Fishery Board tweeted about placing more acoustic receivers for the Moray Firth Smolt Tracking project. Whilst, this project has received much publicity, it is not the only tracking project that has taken place in Scotland. 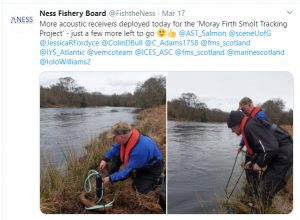 Currently, smolts are being tracked in the River Tweed. The River Dee tacked smolts in 2017. Marine Scotland have just released some preliminary findings of a tracking project in Loch Torridon on the west coast https://blogs.gov.scot/marine-scotland/2020/03/18/acoustic-tracking-of-salmon-and-sea-trout-in-torridon/ The key finding is that predation has been identified as a source of mortality for sea trout.

I have now heard on the grapevine that the West Sutherland Fisheries Trust, who had also been running their own tracking project in Loch Laxford, also on the west coast, are due to publish a report about their findings. Amongst the findings was that only 5% of the fish tagged migrated out of the Loch during their first summer at sea. Older fish followed a similar pattern. Those that remained in the loch tended to congregate in a food rich small area near the river mouth. More importantly, the study found that the sea trout were not attracted to the area around the loch’s salmon farms.

The study tagged 99 fish and 17 individuals were found to be infected with sea lice, however infection levels were very low and were consistent of natural levels found in areas without aquaculture. This seems contrary to the evidence claimed by opponents to salmon farming.

I understand that the study was conducted by the West Sutherland Fisheries Trust together with the University of Glasgow and with the help of the Atlantic Salmon Trust. This is somewhat puzzling given that Mark Bilsby from the AST recently told the BBC Food Programme that sea lice remain a major issue for migrating fish. This tracking project seemingly suggests otherwise. I await publication of the full report to see exactly what the West Sutherland Fisheries Trust discovered.

Against a background of all these tracking projects, perhaps the £750,000 destined for yet another tracking project on the west coast should be diverted to other research.

Meanwhile, I wait to hear from the SSPO as to whether my application for funding has been successful and if not why. I will keep readers of reLAKSation updated as to how this application for funding progresses. In recent months, I have been in receipt of significantly increased correspondence as more people seem interested in how the industry can fight against the negative publicity especially from the wild fish sector. I will aim to satisfy this increased interest with views and hopefully more research into why wild fish are in decline that are outside the conventional wild fish narrative  and that will allow me to stand up against those who seek to deflect attention away from their own deleterious activities.

Thanks to everyone for their continued interest in reLAKSation and all please keep well during these difficult times.

Warming up: The Times reported this week that Scotland’s marine life has been transformed by warmer seas. When I saw this story, I thought that it would become a major news item throughout the fishery sector but rather surprisingly, it does not seem to have merited much comment at all.

The Scottish Association for Marine Science has examined data from 1980 to 2018 that has given a clear indication of the rapid effect of climate change on coastal habitats.  Changes to indicator species such as barnacles, limpets and snails as well as seaweeds from across the UK from Cornwall to Shetland have shown a 250 km shift northwards. This means that Shetland’s coastal marine community is now similar to that of northwest Scotland 40 years ago. SAMS have said that there has been an increase in species with an affinity to warmer water and a decrease in creatures that prefer colder water.

Much of the effort relating to wild salmon and climate change has focused on trying to provide shade to rivers to ensure returning fish will breed. However, if coastal waters are heating up, could it be that some returning salmon are deterred from heading south and instead favour entry to more northerly rivers. Certainly, fishing reports suggest that the most northerly Scottish rivers are showing less of a decline of stocks than those located further south.

Catch statistics: The rod caught salmon and sea trout statistics for 2019 have yet to be published but when they are, they will be totally meaningless. As I previously mentioned, members of the wild fish sector have complained to Marine Scotland that the publication of salmon and sea trout catches in their previous format is contrary to GDPR regulations.

The previous catch statistics to 2018 had been removed but has now been reinstated on the Scottish Government website. However, whilst data used to be available for 109 separate fishery districts from 1952 to 2018, this has been reduced to just 56 sets of data. Catch data for the larger rivers such as the Tweed remains unchanged but data rivers such as the Ewe has been amalgamated with that from Little Loch Broom and Gruniard fishery districts. This means that whilst the anglers complain that Loch Maree collapsed due to the local salmon farm, any recovery following the closure of the farm cannot be plotted by anyone except the local fishery board and Marine Scotland Science.

I cannot be any clearer than to say that this is a scandal and should be opposed by everyone from both the salmon farming industry and wild fish sector. At a time when demands for greater transparency are the order of the day, this is totally wrong.