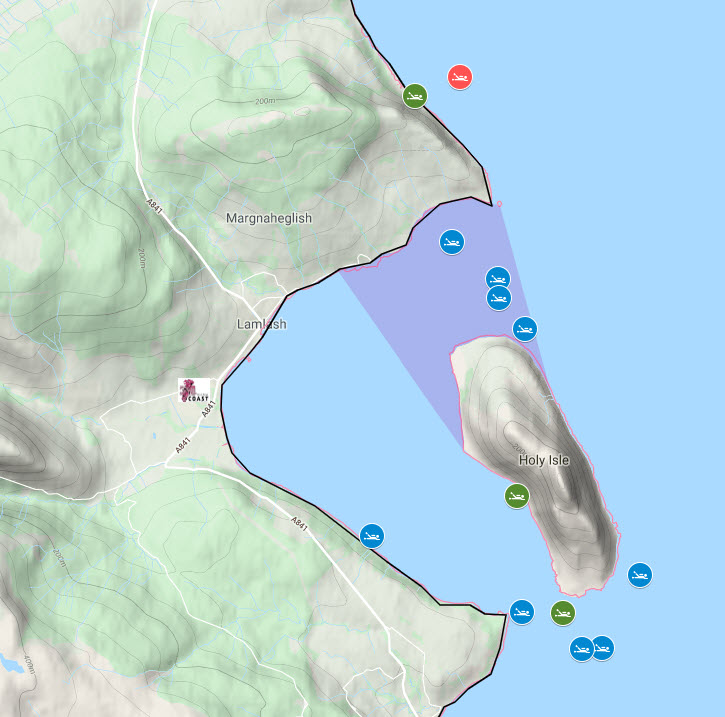 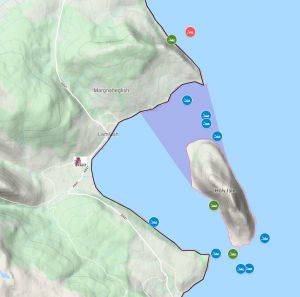 Festive deals: Following our usual tradition of highlighting the best salmon deals over Christmas in the first reLAKSation of the year, the best prices at the end of 2019 were:

As we have previously pointed out, whole salmon is no longer the best indicator of salmon sales since for most of the year it is not available, except to order. Consumers much prefer salmon fillet and actually, many of the customers for the whole fish request that it be cut up rather than serve it as a whole fish centrepiece.

We have also regularly pointed out that these Christmas prices do not reflect the cost of production as they are priced as loss leaders to attract customers to store. Retailers promote beef joints and other meats in exactly the same way at this time of the year.

Our view of the fish offering at Christmas this year was that it had lost some of the sparkle of previous years, although last year was not as good as the year before that. This is a reflection of the general economic situation and does not indicate any decline in demand for salmon. The overall situation was clearly summed up for us by the offering in M&S. Who would have thought the up-market retailer would be offering vegetable market deals at just 40p. Many consumers are now so price conscious that they seek out the best deals and these are typically found in the discount sector. M&S must have felt that it had to compete and offer similar deals in order to retain its consumer base. 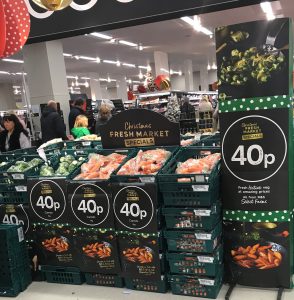 This price pressure was apparent from the decreased number of elaborated products available this year, but the absence of these products was offset by more offerings of chilled and smoked salmon. These appeared to do well with widespread observations of such products in shopper’s baskets and trolleys. We therefore expect salmon to continue to dominate the fish sector in 2020.

Wild fish: 2019 was the year that the wild fish sector stepped up their campaign against the salmon farming industry but like Nero who fiddled whilst Rome burned around him, wild fish stocks continue to plummet, even in areas where there is no salmon farming.

The Times newspaper ended 2019 with an article headlined ‘Fishing paradise dried up as River Wye salmon are driven to the verge of extinction’.

The paper says that the River Wye has been a magnet for anglers for many years, but predation, water abstraction, poor water quality and fishing at sea have affected salmon numbers.

According to the Times, Robert Pashey, who fished the river between 1906 and 1951 caught up to 678 salmon in a single year, something that would be impossible today. Catches in 2019 fell to an estimated 350, the lowest figure since 1941, which may have had something to do with the ongoing war at the time. 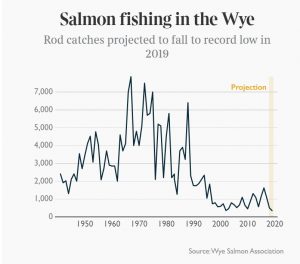 The Wye Salmon Association (WSA) say that the figure for salmon rod catches represent the bottom of a 20-year decline, yet at the same time, they say that up until the 1970’s the Wye was England’s premier salmon river. They added that they now face the real prospect of virtual extinction as the number of salmon in the river do not enable it to self-sustain as a viable breeding population.

The WSA say that until 2015, they ran a juvenile salmon stocking programme but since then this has been banned by Natural Resources Wales, the quango that has managed the Wye since 2013.

The River Wye runs down the border between England and Wales and enters the sea in the Bristol Channel, many hundreds of miles from any salmon farm. Although not mentioned by the Times, those critics in Scotland would argue that the smolts from the Wye will migrate up the west coast and pass ‘lice infested’ salmon farms which is why the Wye stock has been in decline since the 1970’s, when salmon farming began. Unfortunately, the Environment Agency aggregate catch data as regional so it is impossible to compare catch data from different rivers in England and Wales in the same way as in Scotland. However, it is clear that the overall catch is in decline as in Scotland.

Whilst critics blame salmon farming, the reality is that the wild sector has no idea as to the routes taken by smolts to their feeding grounds. They simply assume that fish must pass close to west coast salmon farms because it appears to be the quickest route. Despite over 40 years of criticism, the wild sector has made little attempt to understand the interactions between salmon farming and wild fish. It is all conjecture.

Having spent so long criticising salmon farming, they now find it difficult to back-pedal and recognise that the decline of wild salmon stocks has little to do with salmon farming. Otherwise, they could all make the trek down to the river Wye and catch as many salmon as they want to their heart’s content.

MConS: The Marine Conservation Society has begun the New Year with a campaign to persuade consumers to avoid buying red rated fish. They have tweeted a graphic that suggests that some farmed fish have been red rated because they are raised on a diet of wild fish, whose populations have plummeted and that consequently, wild fish and other species are suffering. They say that this is why some farmed fish are red rated. 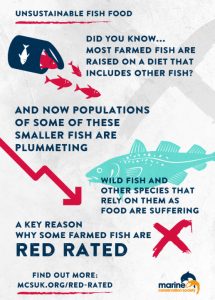 However, the latest pdf version of the Good Fish Guide provides a list of red rated fish that doesn’t seem to include any farmed fish at all.

In fact, the only farmed species on the list are prawns and only those that are not certified. Most prawns sold in UK retailers are certified so are not red rated.

This is another example of an NGO criticising the fish farming sector and then failing to substantiate their claims.

Of course, the MCS is a charity and as such receives funding from a range of sources. We notice that the Monterey Bay Aquarium is one organisation that has funded the MCS and the MBA is funded in turn by the Packard Foundation, which once ran major negative campaigns against the salmon farming industry. Fish farming is not the only user of wild fish and as we have regularly pointed out, over 2.8 million tonnes of wild fish goes to feed pet cats around the world and we are unaware that the MCS has yet to argue that pet food should be avoided.

This week, two articles about pet food have been published. Hakai magazine has highlighted new research that found shark squalene in pet food and DNA analysis has revealed that some of it is coming from endangered species including scalloped hammerhead sharks and shortfin mako sharks, the latter is listed on the IUCN red list. In total 21 different species of shark were found in pet food.

Seafood Source has highlighted that the seafood industry is increasingly benefiting from demand from the pet food industry. Much of the high protein going into pet food and treats is now human grade. This is because pet owners want only the best for their animals. Purina foods say that pet food trends now mirror those for humans such as Better for You, Natural, Fresh Ingredients, High Protein, Grain Free. Purina say that the cod is sourced from Alaska, tuna from the Pacific and Hake from the NW Pacific. All the fish they use is MSC certified.

Seafood Source say that whilst total spending in the US on pets is USD 30.3 billion, of which about USD 33 million is spent on pet food with human grade ingredients.

Why is it that NGO’s such as MCS, Feedback, Changing Markets etc all attack the fish farming industry for their use of wild fish but turn a blind eye to the use of wild fish in pet food, let alone pig and poultry farming. The reason is that it is an easy target.

In our view, once lobby groups have stopped the use of wild fish products in terrestrial animals, then they can issue concerns about feeding fish to species that actually eat these fish in the wild.

Arran: The Guardian reports that islanders on Arran are protesting against plans to install a new salmon farm close to what is described as one of the island’s most treasured holiday destinations – the picturesque coastal village of Lochranza. Residents say that the farm will dump faecal waste in the sea equivalent to a town of 66,000 people as well as using acoustic deterrents to ward off seals and will damage the area’s widely admired landscapes.

Coast, a marine conservation charity on Arran said that he Millstone Point was within north Arran’s national scenic area and will be visible from the north Arran coastal walk which attracted thousands of tourists every year.

Coast have been long time opponents of salmon farming, especially in Lamlash Bay, an area where they established a No-Take Zone in 2018 which prevents any fishing activity at all. We are indebted to a Clyde fisherman Kenneth MacNab who posted a tweet this week that we have summarised as:

Maybe someone can explain that whilst there has been a salmon farm in Lamlash Bay since 1988, Coast say that the bay and their No Take Zone are teaming with life which they encourage visitors to snorkel and dive to see.

Coast have posted a map of Lamlash Bay showing the best snorkel and dive sites. 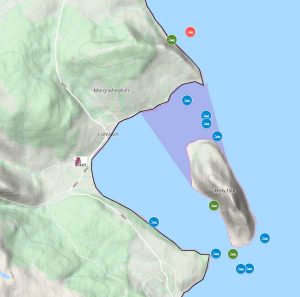 The purple area is the No Take Zone 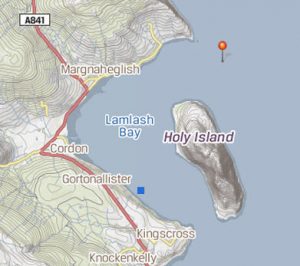 Mr MacNab responded to comments asking that if the salmon farm produces so much waste and disease, why does Coast encourage people to risk their lives snorkelling in the vicinity.

Well done to Mr MacNab, He shows that if challenged, most arguments posed by critics do not stand up to scrutiny. We hope to see many more such challenges during 2020.