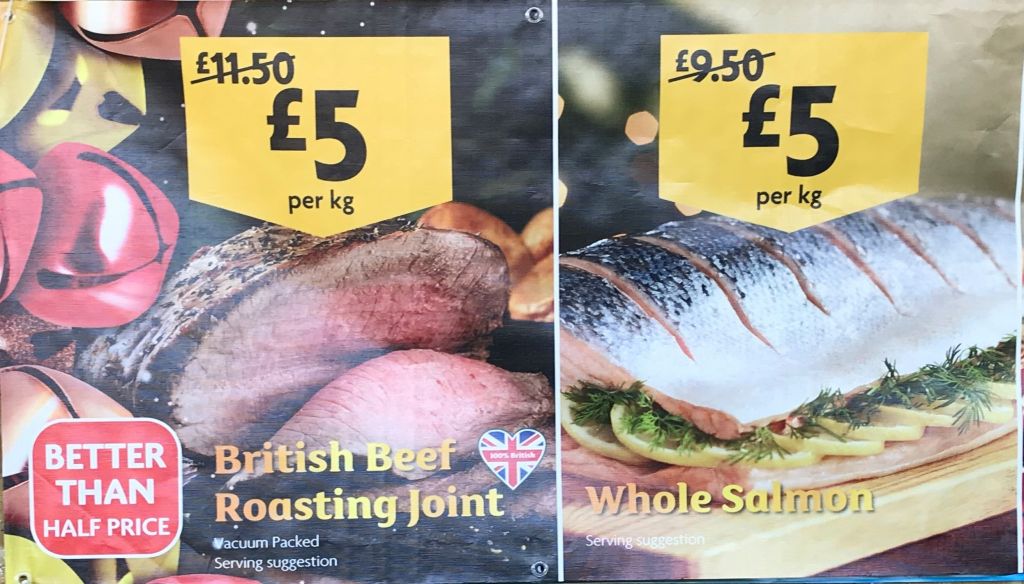 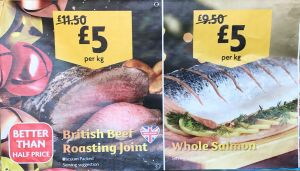 Consumer choice:  This last Wednesday morning we visited a Tesco store in North London and were pleased to encounter a large queue of shoppers waiting to buy a whole salmon. There were four staff on filleting duty as well as serving customers. It was good to see that despite claims otherwise from the anti-farming lobby, consumer confidence in farmed salmon remains extremely high. 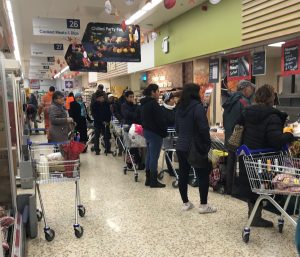 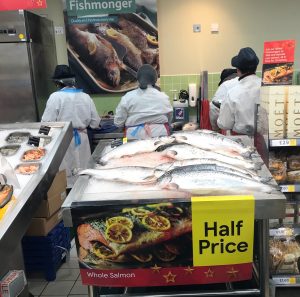 Christmas tastes: Every year, the major newspapers carry out taste tests on a whole range of Christmas foods including mince pies, pigs in blankets, Christmas pudding and smoked salmon. The smoked salmon always tends to be the pack that the supermarkets are trying to promote over Christmas rather than their standard smoked salmon. This means that the salmon is often smoked in different flavours making direct comparison extremely difficult between flavours.

One of the latest reviews to appear was published in the Times newspaper. This included flavoured smoked salmon like the Coop’s smoked salmon with clementine, M&S Lemon & Gin and Aldi’s Gin flavoured. What struck us about the results was that the added flavouring didn’t work with the salmon. The Times tasters gave the smoked salmon just one or two stars or even none at all. However, one product stood out from the rest with five stars and this was Waitrose Chestnut smoked salmon. The Times describes this as being ‘elegant slices, a sweet subtle smoke and a lovely delicate fishiness.’

Having been given such a review, we, at Callander McDowell, organised our taste panel to try out the Waitrose product too. The Times says that the 100g pack is priced at £5.99 but currently it is on promotion at £3.99. Unlike some of the other smoked salmons tasted by the Times, Waitrose Chestnut smoked salmon is not a Christmas special and appears in store regularly throughout the whole year. Having now tasted this salmon, we can understand why. 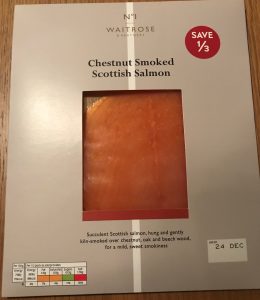 Against most supermarket smoked salmon, the Chestnut smoked salmon in our view certainly merits the high rating from the Times. The salmon slices came apart very easily and looked attractive and with a consistent colour. Most importantly, they were very nice to eat.

£5 salmon: As in previous years, the salmon farm critics have been extremely vocal on social media in drawing attention to Morrisons supermarkets selling whole salmon for just £5/kg. They appear to suggest that the low price reflects on the poor state of the salmon farming industry. As in previous years, we repeat that low salmon prices have been a feature of supermarket promotions for more years than we can remember. Salmon is used as a loss leader headline promotion to attract customers into stores to do all their Christmas shopping. The adverts, which have appeared in the press and in store, make it clear that the price has been cut for the promotion from its normal price of £9.50/kg. This is no different to a whole range of foods and goods in store at this time of year. The critics claim the salmon is cheap and nasty and should be avoided especially as the fish might have come from a farm that has previously had some ‘issue’. 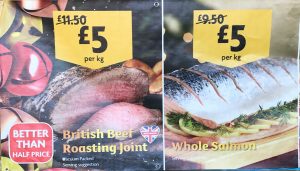 Interestingly, Morrisons, are promoting the salmon alongside a joint of roasting beef which is advertised as better than half price also at £5/kg down from £11.50/kg. We have looked across the internet and cannot seem to find any reference to members of the environmental movement suggesting that Morrisons shoppers should avoid buying ‘cheap’ beef. They could suggest that Morrisons are encouraging shoppers to buy more beef by cutting the price and are thus also adding to the pressure on climate change. However, it appears that no-one seems to be taking this approach.

The difference is that the anti-salmon farming brigade mainly consists of those who want to catch and kill wild salmon for sport and who blame salmon farming because there are none left. We suspect Morrisons shoppers are not in the slightest bit interested whether this vocal minority can fish for salmon or not.

Chicken flu: Along the same lines, the BBC reported last week that Bird Flu had been identified at a farm in Suffolk and as a result, 27,000 chickens were slaughtered. We have looked across the internet and cannot seem to find any organisation or individual suggesting that because a chicken farm has succumbed to a health issue that consumers should stop eating chicken. The only reason that consumers are told to stop eating farmed salmon is that the wild fish interests blame salmon farming for the decline of wild fish stocks and they hope that if salmon faming businesses can be moved or closed down then wild stocks will recover and  they can continue to catch and kill fish for sport. As we have repeatedly pointed out, wild fish stocks have declined irrespective of whether salmon farms are present or not as the Canadians will ultimately discover if their Government’s policies are eventually imposed. We will talk more about Canada in the next issue of reLAKSation which will be available between Christmas and New Year.

Pringle: The Italian authorities recently seized 250 tubes of the crisp type snack Pringles. According to the Guardian, these were part of an investigation into the use of EU protected names. These Pringles were a relatively new flavour – Prosecco and Pink Peppercorn, part of the brand’s new dinner party range. The flavour has previously appeared in UK stores Asda and Tesco.

The seizure is part of an ongoing investigation into use of the Prosecco name which is protected by DOC (denomination of controlled origin) and can only be used if authorised by the region’s consortium of prosecco producers. The name has been protected since 2009. However, Pringles say that the name was used in line with European regulations and DOC guidelines and it was a limited edition, but they have undertaken not to supply any more until the investigation is complete. We are not even sure how much of an infringement this really is. Pringles were not selling bottles of fizzy wine that they called Prosecco they simply used the flavour, even acknowledging the fact.

Protected names are a feature of many UK foods including farmed salmon, wild salmon and London smoked salmon. As the UK leaves the EU, they will lose this designation and the protection. We are not sure that it will make such a difference as many of the producers of these foods were encouraged to seek protection because it was perceived to confer a marketing advantage but never has. Instead, it protects the name from unauthorised use as prosecco producers have claimed when Pringles used their product and name. Scottish salmon producers originally sought protection because there was concern that Norwegian salmon was being sold as Scottish, but such concerns were unfounded. Losing protection now will make little difference to salmon producers.

With regards to Pringles’ infringement, perhaps we can look forward to smoked salmon flavour instead. We don’t think the salmon farming industry would have any complaints.

Food impacts: Intrafish report that British supermarket Tesco and WWF have joined together to assess the environmental impact on UK shopping baskets. They are conducting an environmental impact on a basket of twenty food items. Even before we fully read this news story, we knew that farmed salmon would be one of the items included in the basket. The full list includes bananas, beef, biscuits, blueberries, bread, cola, crisps, Chicken tikka ready meal, eggs, lettuce, milk, oranges, potatoes, rice, salmon, ham sandwich, tomatoes, tomato soup and canned tuna.

As we are regular visitors to stores, we are well aware about the huge distinction between something like blueberries or salmon which take up a tiny space on the shelves, yet bread, potatoes, biscuits, crisps and cola can take up a whole aisle. The comparison on the environmental impact will be massive simply due to the difference in volumes sold. This also applies to other items sold in stores such as pet food, which can take up both sides of one aisle.

Although not for human consumption, pet food is often included in comparisons of shopping baskets because so much of it is bought by shoppers, even to the point that often pets get priority over their human owners. We were not surprised that the WWF assessment does not include pet food. None of the environmental groups ever refer to this problematic issue as it is much easier to ignore then address. For farmed salmon, WWF and Tesco say that the key issue is fishmeal and oil, even though fishmeal usage is much less than it used to be. The last figure we have for fish usage in pet food was that 2.8 million tonnes of wild fish were harvested to feed pet cats. No-one ever suggests that this is an issue but using the same wild fish to feed to salmon is? Of course, the environmental groups prefer to attack salmon farming because it is an easy target, whereas pet owners would rebel if they could not buy their pets’ favourite foods.

We would also ask that if feeding fishmeal to salmon is wrong then why are supermarkets like Tesco selling fishmeal for their customers to spread on their grass lawns as fertiliser. This is something else WWF should address, but they have not done so as yet.

Finally: Following last week’s issue of reLAKSation, we waited for Mr Corin Smith to respond to our comments about the price of salmon in M&S. He was adamant that farmed salmon was selling at £75/kg. We have heard nothing. However, his colleague at Salmon & Trout Conservation Scotland, Mr Andrew Graham Stewart writes that ‘supermarket fresh salmon is retailing for around £15 per kilo’!

More interestingly, neither Mr Smith nor Mr Graham Stewart have responded to the mail from OneKind that states:

We certainly would like to hear confirmation that Salmon & Trout Conservation Scotland have nothing to do with angling. Instead, Mr Smith has returning to posting comments about his issues with salmon farming.