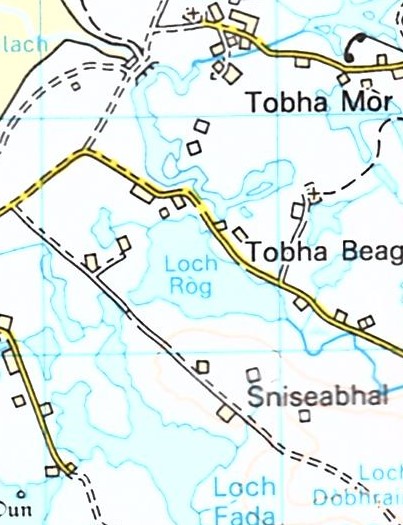 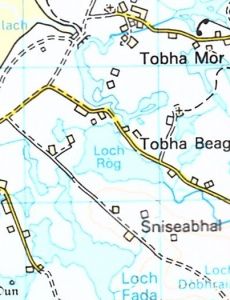 Struggling: The Norwegian Scientific Council for Salmon Management (VRL) has assessed sea trout stocks around Norway and concluded that sea trout are struggling. They also say that they now know why.

We, at Callander McDowell, are also struggling, but in our case, it is trying to understand how any conclusions can be drawn from a single snapshot of sea trout populations, especially when it comes to sea lice infestations.

VRL say that they have identified the main threats facing sea trout and the biggest negative factor is sea lice. According to VRL, 91% of sea trout stocks are adversely affected by sea lice. VRL say that it seems sea lice have a stronger negative impact on sea trout than on salmon. Given that it is common knowledge that sea trout generally remain in coastal water unlike salmon that migrate far out to sea, such an assumption is not of any surprise.

However, what is rarely appreciated is that appearance of sea lice on sea trout is not any indication that the stock has been compromised. Sea lice, like all parasites, follow an aggregated distribution, not a standardised one. Thus seeing a few fish carrying lice is not an indication that they are representative of the whole stock. In fact, in an aggregated distribution a few hosts carry many parasites whilst most hosts have none. Thus, sea lice may appear in 91% of the rivers assessed but it doesn’t mean that they are the reason why the stocks are in a poor state. After all, anglers revel in catching salmon carrying sea lice, even from rivers where there are no salmon farms.

In our view, this is why a historic perspective is more important than a single snapshot. Regular readers of reLAKSation will be aware of our graph of the decline in sea trout catches from within the Scottish aquaculture zone. 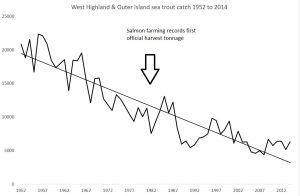 We are still waiting for anyone from the wild sector to comment on our view that whatever caused the decline in sea trout catches that occurred before the arrival of salmon farming might also be responsible for the decline in more recent years.

When the decline of sea trout catches from the west coast are compared to that from the east where there is no salmon farming, the overall trend is almost identical. 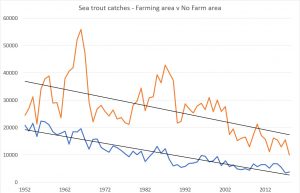 Sea trout are also in long-term decline in England and Wales as well as parts of Europe. Why should Norway be any different?  It is just it is too easy to blame salmon farming for problems with sea trout stocks. We have tried to discuss this with scientists from VRL, but they were not interested. We also note that two of the members of VRL were commissioned to write a report about the alleged negative impacts of salmon farming by Salmon & Trout Conservation in their campaign against salmon farming in Scotland. Both scientists work for NINA, an organisation that dominates the make-up of VRL.

In addition to sea lice, VRL say that hydro power, agriculture and road construction have all contributed to the shrinkage of areas available to sea trout. VRL say that now that they now what factors contribute to the poor state of sea trout stocks, so now it will be possible to do something about them. Are they suggesting that hydro, agriculture and road construction should be stopped? Of course not. What they mean is that the controls on salmon farming should be tightened.

VRL also say that some sea trout stocks may be over-exploited. In 2018, the Norwegian statistical agency found that out of 47,848 sea trout (and char) caught by anglers, 37,783 were killed and retained. That is nearly 80% of the total catch!

Finally, VRL say that the methods used to assess the stocks are similar to those used to estimate stocks of salmon. Given the questions raised about this assessment, perhaps, there should be questions made about those for salmon stocks.

Fewer: Intrafish reports the results from another study by the Scientific Council for Salmon Management. Their report No 12 looks at the loss of fish due to salmon lice from 168 stocks of salmon measured in 2018 and 169 stocks during the period 2010 to 2014.

Their findings are that the mortality of wild salmon has reduced from 10% in 2010 to 2014 to just 2% or 11,000 in 2018. The reduction is due to significant improvements in rivers in central Norway. Overall, VRL say that the loss of wild salmon (and we, at Callander McDowell would even question whether the loss was due to sea lice or some other factor) is shrinking.

The losses due to sea lice in various parts of the country are estimated as follows:

To put this into context in 2018, anglers caught and killed 79,923 wild fish. It seems to us at Callander McDowell that if measures need to be imposed to protect wild salmon, then they need to be aimed at the angling fraternity, not the salmon farming industry. The 79,923 wild salmon are known to have been killed by anglers whilst the 11,000 fish attributed to salmon farming are only an estimate. As ever, salmon farming gets the blame whilst the real reasons for lower numbers of fish lie elsewhere. 77% of wild salmon caught by anglers are killed whilst only 23% are returned.

Gone: Salmon Business report that the Chief Executive of the Tasmanian salmon industry association has quit after less than a year in the job. The chairman of the association said that he was a very capable fellow but that ‘he was not right for us at the moment’. He said it was a mutual parting of ways and that the organisation wished him well.

Cull: SeaWestNews reports that Washington State Fish and Game together with Canada’s Department of Fisheries & Oceans have organised a workshop in Bellingham Washington to consider what should be done about overpopulation of seals and sea lions.

Whilst the USA has stated that it will stop importing salmon from farms which have resorted to killing seals to protect the fish, the US said earlier this year that it would allow the killing of up to 920 sea lions a year in the Pacific North West to protect endangered wild fish stocks.

The scale of the problem can be illustrated by the boom in California sea lion numbers. In 1975, the population was estimated at about 89,000 whereas now the number is thought to be about 258,000.

In Canada, the harbour seal population in the Salish Sea is estimated at about 80,000 today whereas in 1975, the numbers were about 8,600.

It is estimated that the Salish sea produces about 27 million chinook salmon smolts (including hatchery fish) and that the seals consume about 24 million of them.

Thomas Sewid of the Kwakwaka’wakw First Nation is quoted as saying that ‘The greatest road to extinction of salmon is all due to overpopulation of seals and sea lions.’ He added that the most destructive invasive species to be allowed to breed throughout North America is the environmentalist. He said that the Inuit can harvest seals largely unimpeded by the environmentalists due to their isolation but those First Nation living around the Salish Sea cannot do that unless the US and Canada change the law. Mr Sewid says that he will attend the workshop to ensure a voice of reason is heard, otherwise the extinction of many salmon runs is certain.

Isn’t it odd that despite this enormous growth of seal numbers that the usual critics seem to only blame salmon farming for declining stocks of wild salmon? Of course, we are not surprised, however it is quite clear from the conversations that occur in the salmon angling forums that given the option, anglers would happily blast away at the seal populations that have taken up residence at the entrance to many of Scotland’s rivers. Whether their concerns are justified remain to be seen. The results of the AST’s tracking project have yet to be revealed.

Pathetic: We, at Callander McDowell, don’t really like to draw attention to the activities of the anti-salmon farming lobby. However, sometimes we feel it is necessary to highlight how pathetic some of their attempts to undermine the salmon industry really are.

On November 2nd Don Staniford chose to paddle out to some salmon pens, climb on board and tried to film underwater shots of salmon using a camera on a stick. The staff of the farm tried to convince him that his actions were dangerous, and he should leave. Apparently, he was reluctant to do so. The encounter was filmed by a drone operated by one of Mr Staniford’s colleagues.

Mr Staniford has since submitted a complaint to the Health & Safety Executive and the Maritime And Coastguard agency saying that the farming company had endangered the health and safety of the general public during an inspection of a salmon farm.

In his complaint, Mr Staniford claims that staff ‘deliberately rammed a kayak, drove at high speed past a small dingy, unclipped a kayak tied safely to the farm, kicked a paddle into the water and scraped a work boot down his Achilles tendon’. He says that the company’s behaviour was both reckless and dangerous.

We would beg to differ. We would suggest that it was Mr Staniford’s behaviour that was both reckless and dangerous. He says in his complaint that the health and safety of the general public was endangered. The drone footage clearly shows that there were no members of the general public present, just one activist who believes that he has every right to access other people’s workspace without permission. In any other place, this would be considered trespass. If Mr Staniford wanted to inspect this farm, then why didn’t he ask for permission to do so instead of just invading a working space.

Interestingly, the BBC are broadcasting a series of programmes about Sainsbury’s supermarkets. In one, head office was invaded by a group from Greenpeace protesting about plastics. The police moved them on. This is more likely to happen in central London than on a series of floating pens in the middle of a sea loch. The actions are however just the same.

As we mentioned in a previous issue of reLAKSation, Mr Staniford has yet to post any findings from his recent farm invasions. This is why he must rely on Freedom of Information requests as the basis for his attacks on the salmon industry. As we regularly point out, if Mr Staniford wants to see change, he would have more chance of being listened to if he engaged with the industry rather than undertake pathetic stunts. Of course, like his friends in the wild fish sector, there is a general reluctance to engage in discussion because their claims would be soon shown to be what they really are – misplaced.

Loch Roag: One of our eagle-eyed readers noticed an error in our commentary about the large sea trout caught from Loch Roag. This is that there is also a Loch Roag on the Island of South Uist and it was from this loch that this particular fish was caught.

One of the problems with Scottish lochs is that the spelling can vary, and we have seen Loch Roag on South Uist written as Loch Róg and as Loch Rochag. It is not surprising they get confused. 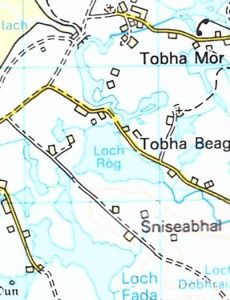 Although this Loch Roag is on the west coast of South Uist, where there are no salmon farms, south Uist is so small that fish will inevitably come into contact with salmon farming. South Uist is still well within the West Coast aquaculture zone and such fish are not considered to exist there but clearly, they do.