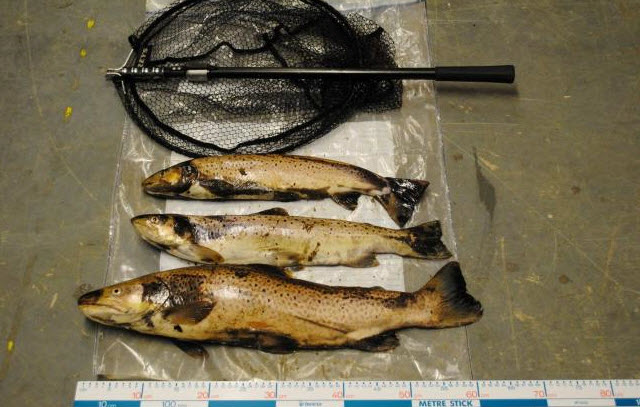 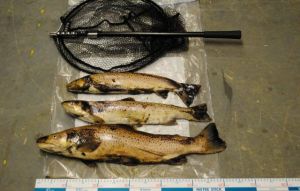 Deathly silence: Since January, we have been working on a potential link between the collapse of the Loch Maree sea trout fishery in the late 1980s and the removal of the three-mile fishing limit in 1984. This week the Herald newspaper published a piece in their Agenda column about this link. We are including this short commentary in this week’s mailing. A more detailed explanation of the link is to appear in the forthcoming issue of Fish Farmer magazine following which it will appear in the next mailing. Meanwhile the wild fish sector has remained deathly silent.

Agenda: Investigate all the Nothing urgent possible causes of sea trout decline 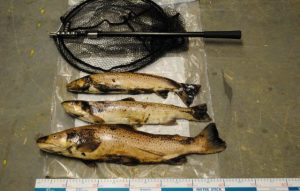 When sea trout numbers in Loch Maree collapsed in the late 1980s, the quest for a culprit settled quickly on the salmon farming sector, yet 30 years later the allegation still has not been proved.

Loch Maree is the fourth largest freshwater loch in Scotland and its sea trout fishery became popular after Queen Victoria stayed at the Loch Maree Hotel in 1877. The loch became known for its prodigious catches of sea trout and for many years bucked the trend of declining numbers across the north-west highlands (government catch statistics began in 1952).

In 1980, 2,994 sea trout were landed at Loch Maree and a further 2,889 the following year. Twenty years later catches had fallen to less than 100 fish per year. Anglers looking for a cause decided a salmon farm in the adjacent and connected Loch Ewe must be connected to the decline. Migrating sea trout, they said, were being infested with parasitic sea lice which weakened and killed them. This link has still never been proven, despite ongoing research, but the belief persists.

It is surely time to investigate other possibilities.

Scotland’s west coast is especially reliant on commercial fishing, and not just salmon farming. In 1984, just three years before the salmon farm was established in Loch Ewe, fishermen persuaded the UK Government to change the fishing regulations around the Scottish coast.

The new legislation removed the three-mile limit around Scotland opening up more coastal fisheries to trawling. Boats were no longer banned from fishing in-shore waters and sea lochs, including Loch Ewe, and some rich catches were reported initially. Within ten years, however, landings of most white fish species had dried up at west coast ports such as Mallaig.

In 2010, eminent fisheries biologist Callum Roberts co-authored an investigation into the collapse of white fish in the Inner Clyde fishing grounds after the removal of the three-mile limit. The startling similarity of the decline of white fish stocks to that of the Loch Maree sea trout fishery is only now becoming apparent. It is possible that juvenile sea trout were an unintended by-catch of these fishing forays. His work prompted my new analysis of sea trout decline in Loch Maree.

Changed fishing practices are potentially a significant factor in the decline of sea trout catches across all of north-west Scotland, not just Loch Maree. It cannot be ruled out that salmon farming has some impact, but is it the main cause? Research has shown that just one percent of wild salmon die as a result of salmon farming. There is no comparable figure for sea trout. Additionally, there are other factors that affect fish stocks such as afforestation and acid rain.

Anglers have for many years demanded the removal of salmon farms from some west coast sea lochs in the hope that sea trout stocks will recover. This blinkered focus on salmon farming has prevented exploration of other causes. The removal of the three-mile limit must now be considered as one major factor in the decline. The Scottish Creel Fishermen’s Association has already been campaigning to reinstate the three-mile limit in the hope marine life in coastal waters will recover. This new work suggests that if the limit was reintroduced, sea trout stocks may also recover.

The complex life cycles of our migratory fish stocks are not yet fully understood. However, as a nation we continue to catch them and profit from them. It is time that an investigation into all potential factors affecting sea trout in Loch Maree takes place, starting with a full peer-reviewed study into the impacts of the removal of the three-mile limit on sea trout numbers.

It is in the interests of all those who make their living from Scotland’s coast and lochs to support further research.

Twice lice:  Salmon & Trout Conservation Scotland recently issued a press statement about their favourite subject – sea lice. The statement headlined – ‘Sea lice numbers on salmon farms double in a single year’ includes comment from Andrew Graham Stewart, S&TCS Director. He says that ‘the data indicates that there was a huge escalation in the production of sea lice larvae, at the most critical time in the spring when juvenile salmon migrate from their rivers to sea and are most vulnerable to fatal sea lice infestations’.

S&TCS provide notes to editors in which they say the organisation was formed in 1903 and since then they have worked to protect fisheries and fish stocks. What they don’t say is that, at least since 1952, when records were first collected, S&TCS members and other anglers have killed an average 88,500 wild fish every year in the name of sport. So much for protecting wild salmon and sea trout. This is why sea lice could be their favourite subject. S&TCS are simply trying to divert attention away from this mass slaughter of wild fish and lay the blame with salmon farming. It’s not surprising that Andrew Graham Stewart refuses to meet us. He is unwilling to face up to the truth that salmon farming is not the villain he claims.

As mentioned above, their headline states that the total sea lice numbers on salmon farms has doubled in a single year. They then go on to say that data published by the SSPO shows that the average adult female sea lice count per fish increased from 0.25 in April 2018 to 0.49 in April 2019; an increase of 96%. They include a table showing data for every month from 2013 to April 2019 but they have compared the figures for just one month This is the difference between the counts for April 2018 and April 2019. They are being extremely selective in what they claim. By comparison, they could have equally said that counts have halved in the period, January to April 2019 compared to the same period in 2017, which they have. However, this would not support their attempt to discredit the salmon farming industry. 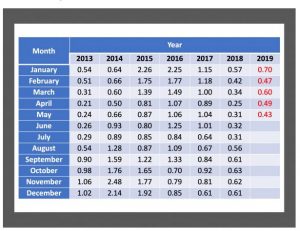 At present, there is no hard evidence that sea lice from salmon farms kill anything more than one percent of wild fish stocks, but Scottish Government data provides indisputable evidence that anglers have killed an average 88,500 fish every year for the last 67 years. That amounts to nearly 6 million fish. Is it not surprising, given this number, that wild fish stocks are now in decline?

Congratulations: We would like to congratulate Don Staniford for his latest PR campaign against the salmon farming industry. He has managed to get extensive coverage in almost every mainstream paper about his forthcoming protest this weekend. Mr Staniford has been very clever in getting publicity in advance of his protest because if it proves to be a total wash out, he will have already highlighted his message.

Mr Staniford is also clever in drawing on other ‘organsations’ to show support for his protest. In his press release, he lists SumOfUs, OneKind, Animal Concern, PETA and the Green Party. All have added a comment to the press release, most of which show poor understanding of the salmon farming industry.

However, we were especially drawn to the comments made by Sondhya Gupta of SumOfUs, a group which campaigns against corporations by getting their members to sign petitions. SumOfUs recently submitted a petition of 43,000 signatures calling on the Scottish Government to conduct more inspections of salmon farms. We suspect that most of those who signed this petition are not even based in the UK. SumOfUs began life in North America. Sondhya Gupta is their UK based representative but one who keeps her head well below the parapet.

What is interesting is that this protest is a collaboration between Mr Saniford and Ms Gupta and therefore the press release includes her contact details – a mobile and an email – something which is not usually available. The publication of her telephone number was an opportunity too good to miss.

In Mr Staniford’s press release, Ms Gupta is recorded as saying ‘Scottish salmon should be the pride of Scotland – not a shameful secret branded ‘sustainable’ whilst fish live in filthy conditions unfit for any animal.’

We called Ms Gupta with a couple of questions. We didn’t think that she would stay on the phone for a long conversation and she was a reluctant conversationist from the start. In fact, we don’t think she was too pleased her telephone number had been publicised.

We asked had she ever been to visit a salmon farm – her answer is that she has sailed past one.

We therefore asked, given that she hadn’t visited a farm how she knew that salmon live in filthy conditions unfit for any animal – her answer was the water around the farm was dirty.

And that was that.

Clearly, Ms Gupta has no idea about salmon because if she did, she would know that they are extremely intolerant of poor water quality. They certainly wouldn’t grow if they lived in filthy water, that is if they survived at all.

This is the problem with many of those opposed to salmon farming. They have no idea about farmed salmon and what is worse, no desire to find out the truth. They are happy to oppose salmon farming simply because it fits in with their own agenda.

Ms Gupta seemed to be uncomfortable being challenged about her claims. We should be challenging these critics more because they are so unwilling to accept the truth.

What is much more interesting about this group is that they have attracted support from a wide range of 37 environmental charities including Buglife, Scottish Badgers and the Butterfly Conservation Group as well as WWF, Friends of the Earth and the Royal Society for the Protection of Birds. The home page of the groups’ website scrolls through images of different species they wish to protect including the Atlantic salmon.

Rather strangely, not one single organisation that claims to dedicate itself to the protection of wild salmon has signed up to be a member of the Fight for Scotland’s Nature. Is this because they are still more interested in catching and killing the fish for sport. We don’t suppose that the Butterfly Conservation Group recommend that their members catch and kill butterflies as a way of protecting them.