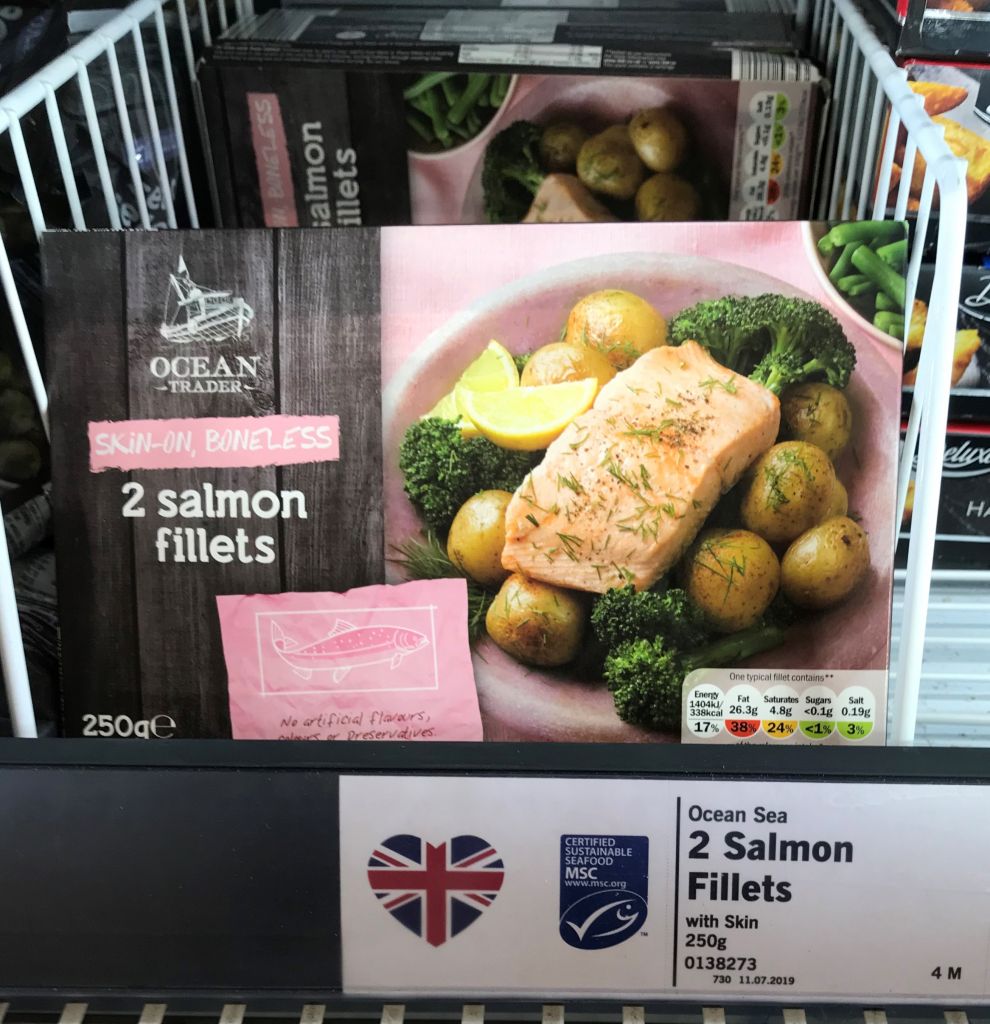 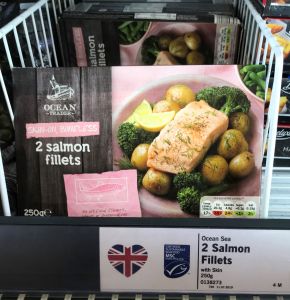 It doesn’t ADD up: BBC TV’s Countryfile programme has again targeted salmon farming. This week it was the turn of Acoustic Deterrent Devices (ADDs) otherwise known as seal scarers. These have been introduced in response to criticism of farms that have shot the occasional rogue seal that has caused extensive damage to the salmon stock. The reality is that that there are some who wish to criticise the salmon farming industry regardless of what action it takes to mitigate its impacts on the environment. Countryfile appears happy to buy into their view.

This time the critic was David Ainsley who the programme describes as someone who had studied marine zoology. What the programme didn’t say is that he runs a wildlife safari business taking holidaymakers out to see whales and dolphins. He claims that ADDs are impacting on these cetaceans and that they are no longer seen in areas near the farms where he presumably operates.

Whilst there was some discussion on what the science says, what the programme did not consider is the actual status of whale and dolphin sightings around the west coast aquaculture zone. The Scotsman newspaper has previously related how the Hebridean Whale and Dolphin Trust had reported record number of sightings of whales and dolphins totalling over 3,000 individuals including 80 minke whales.

The programme also failed to consider the implication of other sources of noise that can impact on cetacean populations. Such impacts include propeller noise. This is known to have significant effect on whales and dolphins. Maybe Mr Ainsley could be asking how much impact his boat is having on individual whales and dolphins as he transports tourists out to see them?

It’s their party: The All Party Parliamentary Fisheries Group (APPG) met in July to discuss marketing and certification in fisheries. They say that UK consumers bought over 467,000 tonnes of seafood in 2017 with the average person eating 1.15 portions a week. They suggest that despite a focus on the big five, demand for alternative species is increasing, which they say is potentially good news for the UK catch. They also say that consumers are becoming more aware of sustainability and provenance and that certification scheme are helping consumers decide which fish to buy. Thus, the APPG organised a meeting to address the changing seafood market and how the UK seafood sector can effectively respond. The agenda included product marketing, challenging consumer misconceptions and the growing role of certification schemes. The speakers included Erin Priddle from the MSC, Matt Slater from Cornwall Good Seafood Guide and Ruth Westcott of Sustainable Fish Cities.

Unfortunately, the specific interests of the speakers meant that instead of looking at the changing seafood market as proposed on the agenda, the meeting seemingly focused solely on the subject of certified sustainable seafood. This is apparent from a blog of the event that was posted on the APPG website and which highlighted that the discussion covered issues such as whether aspects of climate change and carbon emissions should be included in the seafood sustainability ratings. They also discussed whether sustainable seafood should be clearly marked so that consumers can make an informed choice.

In our opinion, it is not surprising that consumers are forsaking fish and seafood. The panel at this meeting might have given the impression that sustainability and provenance are important to the consumer, but the reality is completely different. By coincidence, this week we spoke to a fishmonger who worked at the best performing fish counter of a leading supermarket. In all, their time in the job, not one single person has ever asked about sustainability or the MSC. This is nothing new as we have heard the same story many times before. In fact, those readers of reLAKSation who have followed us for many years might remember that we have previously suggested that if all the MSC logos were removed from every supermarket, no-one would notice. We can illustrate this by an example from Lidl. They sell frozen salmon fillets in a carton and in a bag. Their shelf label for the bag of salmon fillets includes the MSC logo and the description ‘Ocean Sea wild salmon fillet’. The shelf label for the carton also includes the MSC logo with the description ‘Ocean Sea 2 salmon fillets with skin’. However, whilst the bag contains Pink salmon which is caught from the Pacific, the carton contains Atlantic salmon which is farmed in Norway. Farmed salmon clearly does not qualify for MSC certification and whilst there is no logo on the box, no-one has picked up the error on the shelf label. The salmon was recently on promotion and whilst the shelf labels changed, they still included the MSC logo and still no-one has noticed. This is not surprising because no-one ever bothers about the logo. 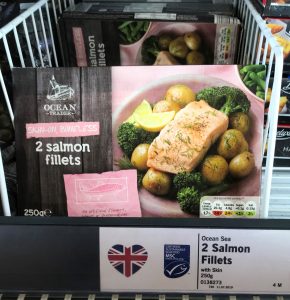 The APPG have highlighted the low level of fish consumption in the UK. It will continue to remain low whilst the issues that affect consumers are ignored in favour of a focus on sustainability. Sustainability may well be important but if we want to persuade consumers to increase consumption, then the fish and seafood industry needs to change their priorities.

Funding: Speaking in Parliament last month, Stephen Kerr MP called for a change in approach by the UK Government that would deliver greater direct investment to the Scottish Aquaculture Sector. This is something which we would very much welcome. However, Mr Kerr, who is MP for Stirling would like to see any available funding spent in Stirling. He said that the town is home to the world-renowned Institute of Aquaculture and the Scottish Aquaculture Innovation Centre (SAIC), which he says makes Stirling a centre for aquaculture excellence and research in the United Kingdom.

Contrary to Mr Kerr’s view, we think that any new money should be spent elsewhere in Scotland because there is a danger that the industry becomes too dependent on the decisions of just a limited few.

Over the years, we have been contacted a few times by people asking if we could suggest ways that they could access help and funding for new projects. In recent years there has sadly been very little help available for small companies. The now defunct Scottish Aquaculture Research Forum (SARF) was always a closed shop. They were not interested in helping external research as they did not accept unsolicited proposals. We thought the Innovation Centre might redress that balance but in our opinion,  they are more geared up to high profile projects part funded by the biggest aquaculture operators rather than helping new start-ups and smaller companies.

Now, Fish Farming Expert reports that SAIC is to invite members of the aquaculture industry interested in developing research projects with academia to attend brainstorming sessions. This is because SAIC funds 25 masters by teaching places and these students need to undertake a research project as part of their taught course.  SAIC now wants to increase the involvement of the industry in these projects to make sure that they are relevant to today’s needs.

We, at Callander McDowell are not impressed. We are not sure why SAIC are spending money on educating students when there are smaller innovative companies that are desperate for funding. Of course, the industry needs new talent but in the long run experience is just as important and talent will shine through whatever. In addition, we understand that SAIC has running costs of over £1 million, which is money that surely could be otherwise used to bolster actual research.

However, the greatest puzzle to us is the news that SAIC are hoping to brainstorm for new projects. This is because we very recently approached SAIC to enquire about funding for a student to undertake a one-year master’s degree by research for a project we are pursuing. We were told that whilst SAIC can fund a one-year masters by teaching or a three-year PhD research student, they cannot fund a masters by research. This in itself is a real mystery since surely teaching is not that innovative, whereas research could be.

We might have thought that SAIC would have responded by saying they would try to explore if our needs could be met by some other approach. However, there was no interest in helping us at all. It’s possible that our project might fit into the teaching programme, but we will now never know.

In our opinion, it is not projects that SAIC should be brainstorming but whether they have any relevance to the existing aquaculture industry.