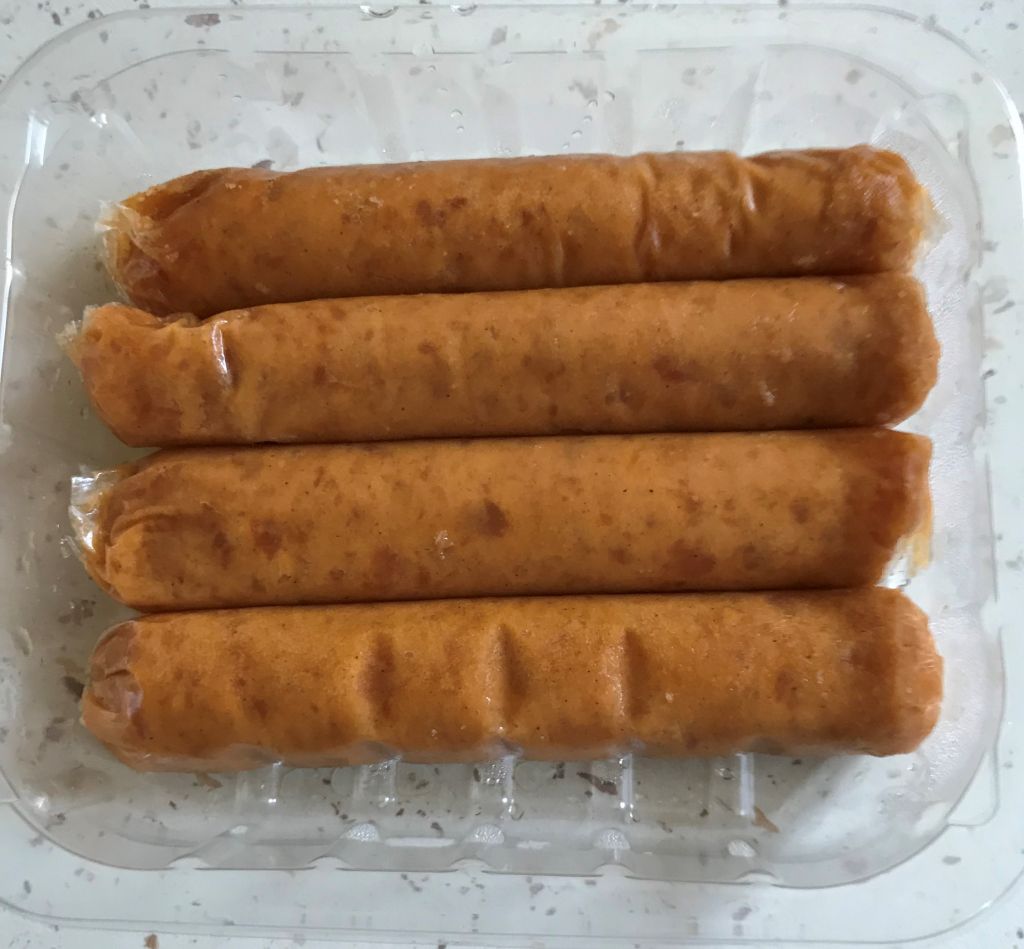 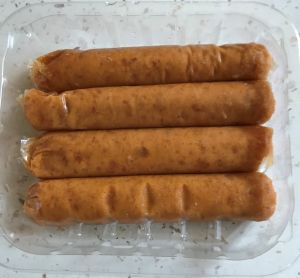 Foreigners: We were recently prompted to write a letter to the West Highland Free Press following an article about the offer by Mowi to move two of its farms in return for access to offshore sites. Anti-farm campaigner Corin Smith had told the paper that this offer meant that foreign-owned companies were holding local Scottish communities to ransom. We pointed out that far from being a local campaigner, Mr Smith also acts for the US company Patagonia in the UK as part of their Europewide campaign against salmon farming. Over the years, Patagonia have spent $105 million on trying to influence public opinion on various issues including salmon farming. As far as we can see, at least foreign-owned salmon farming companies are bringing investment into the west coast, whilst Patagonia offer nothing. In fact, their only dedicated store in the whole of the UK is in Manchester.

We, at Callander McDowell, are interested in Patagonia since viewing the UK premiere of their film Artifishal earlier this year. Regular readers will remember that as we presented our ticket, we were approached and asked if we would refrain from asking questions as they didn’t think that the sort of question we might ask would be appropriate to the audience. We agreed but asked if we could arrange to speak with a representative from Patagonia at another time. This has proved more difficult than we expected. It seems that no-one from Patagonia in Europe feels sufficiently confident about the issues raised to discuss them in a face to face. We have spoken to the European manager on the telephone and his response is that he believes that salmon farms are damaging and therefore we should just agree to disagree, but I don’t accept this. If Patagonia want to disparage another industry, then they should be willing to discuss the issues and not by the use of a substitute. After all, Mr Smith was on the panel at the premiere and should have been up to answering any questions.

The Patagonia roadshow is now heading north. The film Artifishal is being shown in Inverness on August 8th, Ullapool on August 15th, Oban on August 28th and in Fort William on Wednesday 4th September

Tickets for the Playhouse Cinema, Eden Court, Inverness are available from:

Tickets for the Macphail Centre, Ullapool are available from:

The venue is listed as being at SAMS but we know SAMS have sent out a note to say that they will not be hosting this showing. Tickets are available from:

Tickets for the Pinemartin Café, Fort William are available from:

We hope that as many people from the industry as possible attend these showings and use the opportunity to subject Corin Smith to some really difficult questioning.

Corin Smith isn’t the only anti-salmon farm campaigner who objects to overseas owners. The greatest exponent is Don Staniford who has been (unsuccessfully) playing the Norwegian card for many years. However, his objection to overseas ownership seems only to apply to salmon farms because in a recent video he is clearly seen driving a German made VW. Whilst Don has repeatedly called for transparency in the salmon farming industry, he is not so willing to be transparent about his own ‘organisation’ and how it is funded. He has said in the past that he is funded by public donations but given that he could only raise £1,595 of a target of £5000 by crowdfunding, this seems unlikely.

Whilst Don objects to foreign ownership, he doesn’t shy away of seeking help from abroad. He has just delivered a 43,000-signature petition to Marine Scotland which was organised by SumOfUS, a global advocacy organisation and online community that campaigns to hold large corporations to account. The organisation was launched in the US and their current executive director is based in Seattle. The membership is now about 5 million. They run a large number of petitions at the same time on their website, so it is nothing for someone to sign another one even if they don’t really understand what it is about. Current campaigns include one telling Costco to protect forests by using recycled pulp in toilet paper. Another tells Lidl to stop their unfair banana trade whilst Pepsi Corp are told to stop their profit first palm oil policy.

In all, the petition accumulated 43,218 actions although in a video shot outside the Scottish Parliament, he claims the number is 48,000. SumofUs tweeted that ‘with our partners, we delivered our 42,000 strong petition today to Marine Scotland’ along with a photo of Don outside Victoria Quay. However, it is clear from the photos and video shot outside the Government Offices and the Scottish Parliament that despite forty thousand plus supporters, only Don turned up to deliver the petition. This was no different to the last time Don delivered a petition to the Scottish Parliament except then MSP Mark Ruskell came out to accept it and have his photo taken with Don. This time, there are no photos of the handover. It was all something of an anti-climax. All noise and no substance.

Whilst there was no-one present other than Don to witness the handover of the petition, a Scottish TV film crew had been persuaded to come to the Scottish Parliament to interview Don. This was reported on the STV website and besides comments from Don, the report also included comments from ‘a protestor’, who said that public citizens need to do some filming in and around salmon farms as otherwise they won’t be accountable. Given that there was no-one else present, these comments must have come from Don. We assume that the reporter is trying to give the impression that this is a bigger event than it actually was. The lunchtime STV news broadcast included coverage of Don’s protest but it wasn’t considered important enough to be included in the main evening news. We only mention it because something Don said caught our attention.

Don filmed the lunchtime coverage from his PC otherwise there would not be a record. It can be viewed at https://www.youtube.com/watch?time_continue=3&v=ILo1bCdFPX0 He says: “Scottish salmon is an icon to Scotland, the wild Salmo salar, the leaper up rivers but that’s not the truth any more. This is a battery, factory caged product. Instead of doubling or trebling production we need to curb production. We need to close down salmon farms at the mouths of migratory rivers.”

Mr Staniford is pictured on his Scottish Salmon Watch website alongside his wife, both holding up a placard with a clear message – ‘Fish Farms:  Get out of Scotland’. ‘Closing down salmon farms at the mouths of migratory rivers’ is a completely different message and to us seems to be a change of tack. In our opinion, he has given the game away and now it is crystal clear how Don is funded, and it could well be very close to home.

Finally, for his next stunt, Don has arranged to have some company, so he won’t be on his own. He is planning to present a dead salmon to the Scottish Fisheries Minister. We hope that they both wear a badge, so the Minister will know which is which!

Feedback again: The organisation Feedback have still been promoting their report criticising the salmon industry for allegedly depleting the world’s oceans of wild fish. We have sent them a copy of our comments in a previous reLAKSation but unsurprisingly, they have not responded.

We were also interested to read in Fish Farming Expert that salmon feed supplier Skretting plan to continue using sustainably sourced marine ingredients. They say that fishmeal and fish oil still remain relatively abundant and provide well-balanced sources of high-quality protein and energy for aquaculture feed formulation. The company do still recognise the need for novel ingredients to fill a possible raw materials gap and continue to explore all options.

In our view, there are lots of other ways of reducing demand for wild caught fisheries which don’t involve species that normally eat these ingredients in the wild. This is the area that Feedback should investigate rather than picking on the obvious target. Sadly, they do not appear interested.

Discount shopping: The ‘MyLondon’ website investigated how much money shoppers can save by opting to shop at Aldi rather than Tesco. They say that feeding a family can be expensive so bargain supermarkets such as Aldi can be a godsend. However, they asked whether a weekly shop at Aldi is that much cheaper that a similar shop at Tesco.

They compiled a meal plan and compared the cost of the ingredients from Aldi with those from Tesco using own brand products. This comparison attracted our attention because the Sunday lunch in the meal plan consisted of salmon with rice and vegetables. They found that the shop at Tesco cost £50.19 whilst that from Aldi saved £6.50 at £43.69.

However, if we were eating this meal plan, we certainly wouldn’t send ‘MyLondon’ out to do the shopping because we can make further savings on top of those ‘MyLondon’ identified.

The comparison includes a breakdown of every product from each store. This includes a pack of salmon fillets. In Aldi, we could save a further £1.10. This is because the Scottish salmon fillets bought for the comparison cost £4.09 (£17.04/kg). These are the De Luxe offering yet there is a standard pack of the same weight too which sells for £2.99 (£12.46/kg).

Comparative shopping is not as easy as ‘MyLondon’ would have their readers believe. This is because own label packs can take a variety of formats. In the real world, stores regularly run offers meaning that branded items can be cheaper than own label. In the case of salmon, this is not that relevant since branded salmon is a rarity. Young’s salmon fillets are available in Asda on a multi-buy deal, but they are not much cheaper than Aldi’s De Luxe salmon as listed by ‘MyLondon’.

For those salmon shoppers who are not seeking the cheapest deal available, salmon at the other end of the market sells typically for about £24/kg. The higher price can be due to a supermarket premium, the cut and the presentation. As with all food, the shopper buys what is best for them.

Hot weather:  If this current hot weather isn’t an excuse to get out the BBQ, we don’t know when is. This is therefore an ideal time to taste a couple of products that are ideal for the BBQ. These are M&S’s Masala salmon burgers, made with salmon and pollock. The two burgers (228g) are priced at £4.50 or part of the 3 for £10 deal. 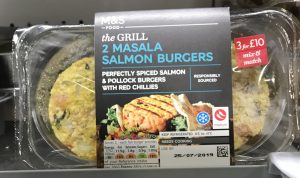 The second product is Sainsbury’s salmon sausages with BBQ flavouring. These cost £3.75 for 4 sausages with a pack weight of 280g. 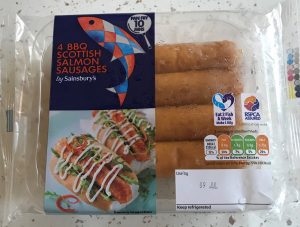 The sausages were easy to cook and were perfectly fine to eat. We tasted them as they were and without any other accoutrements. They have a mild salmon flavour and we think that they would be enhanced served in a bun with sauce and salad. We did think that the vegetarian casing detracted slightly from the overall mouth feel but we would be happy to serve these sausages at a BBQ. 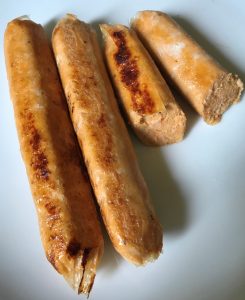 The salmon burgers had a much more distinct taste of masala spicing but it was not overpowering. The burger could be seen to contain distinct pieces of salmon and pollock and both could be identified by taste. Like the sausages, these burgers would be a welcome part of any BBQ we hosted. 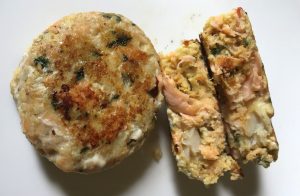