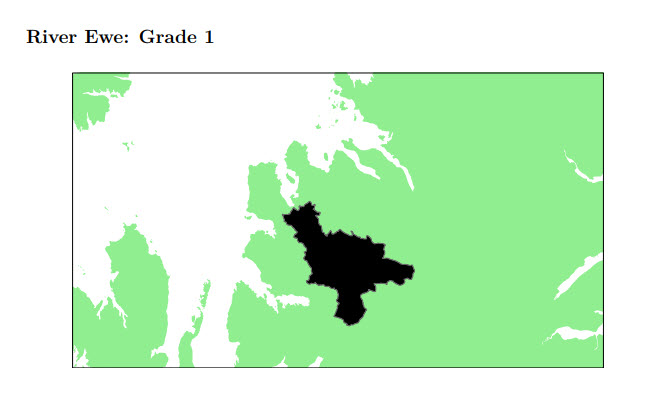 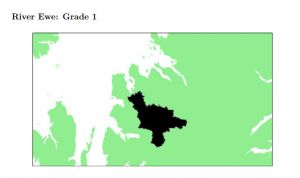 An education: We learned something new this week. We watched the Scottish TV news about the possible removal of the Loch Ewe salmon farm which included an interview with Andrew Graham Stewart of Salmon & Trout Conservation. He said:

You’ve got a narrow exit from Loch Ewe into the open sea so any parasites and diseases or other problems that the farm may cause in Loch Ewe are going to remain in Loch Ewe.

We have been researching the impacts of salmon farming on wild salmon with special reference to Loch Ewe and Loch Maree for nine years. We have even published a book on the subject – Loch Maree’s Missing Sea Trout (Amazon) yet this is the first time that we have heard that the topography of the Loch is directly related to the decline of sea trout in Loch Maree.

Dr Andy Walker, formerly of the Freshwater Fisheries Laboratory in Pitlochry conducted much of the scientific work on the sea trout in Loch Maree. He was commissioned by Salmon & Trout Conservation to produce a report on the collapse of the Loch Maree sea trout fishery – https://www.salmon-trout.org/wp-content/uploads/2017/09/Loch-Maree-collapse-A-Walker-report1.pdf

In his report, Dr Walker says that: ‘Loch Ewe (16 km long, mean depth 15m) lies in an approximately north-west direction and is sheltered from the open Atlantic by a narrow entrance (c2 km)’. He goes on to say: ‘The loch takes 4 days to flush with some deep water exchanging (max depth 73 m) more slowly than this.’

The loch is divided by the Isle of Ewe so that there is only a small portion of the loch that is much wider than the opening to the sea. Dr Walker makes no mention that the opening to the sea is a contributory factor in the collapse of the local sea trout stock. The fact that the loch flushes out every four days does not appear to support Mr Graham Stewart’s claim that any parasites, diseases or other problems will remain in the loch. We are also wondering what diseases and other problems Mr Graham Stewart refers to. Whatever they are, they certainly didn’t deter Mr Graham Stewart from going fishing last year in the River Ewe. This was highlighted in a past issue of Trout & Salmon magazine in a section called ‘what our contributors are doing this month’. We wouldn’t be surprised if Mr Graham Stewart has returned to the River Ewe this year as the river has been classified as a Category One river which means that if the local rules allow, anglers can kill the fish they catch. It does seem rather strange that given all the parasites, diseases and other problems that are stuck in Loch Ewe that the River Ewe could be given the highest conservation grading possible. Could it be that the 2 km opening to the Atlantic is sufficiently wide to allow all these nasties to be swept out to sea or could it be that they don’t actually exist, and that Mr Graham Stewart is simply mistaken? 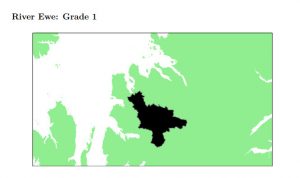 Given that the River Ewe is a grade one river, we might expect that the fishing for salmon could be good. Unfortunately, whilst anglers like Mr Graham Stewart demand salmon farms publish sea lice levels on a real time basis, they are not so willing to publish the number of salmon and sea trout caught. We have to wait until the full catch statistics are published in the spring of 2020 to see what has been caught from the Loch Ewe system.

In addition to his appearance on STV News, Mr Graham Stewart was interviewed on Good Morning Scotland on BBC Radio Scotland. He told listeners that ‘Loch Maree used to be the best sea trout fishery in Europe but once the farm arrives the number of sea trout crashed and unfortunately there’s basically no mature sea trout left in the loch.’ Our question to Mr Graham Stewart would be to ask how does he know there are no mature sea trout in the Loch Ewe system? The usual method of assessing stocks is by rod catch and Loch Maree has been so lightly fished for years, that there cannot have been any meaningful assessment at all. No angler is likely to go fishing in Loch Maree because Salmon & Trout Conservation have been telling them for years that there are no fish left in the loch. Interestingly, 15,795 sea trout and finnock have been caught by anglers from the Loch Ewe system since the farm arrived in the loch. Of these 6,016 sea trout were killed for the pot.

We would also like to ask Mr Graham Stewart what does he mean by a mature sea trout. Does he mean the large multi-sea winter, multiple spawning specimens that anglers have targeted for years? Our next commentary includes reference to the fact that large 12lb sea trout hadn’t been seen in the loch since the 1960s. Alternatively, does Mr Graham Stewart mean females that are capable of reproducing when he talks about mature sea trout. Sea trout have a complex life cycle as they are effectively brown trout that go to sea to feed due to a lack of nutrients in the freshwater environment. Breeding brown trout can produce sea trout and may be responsible for the young finnock seen exiting Loch Maree. If there is sufficient food in the rivers, then there is less incentive for brown trout to adopt a marine phase and it is possible that this is one reason why sea trout have been in decline over the years. Unfortunately, Marine Scotland do not record brown trout catches so we don’t know whether brown trout stocks have been improving over the years to the detriment of sea trout stocks but Butler and Walker in their 2006 paper recorded an increased prevalence of resident brown trout in catches from Loch Maree. Andy Walker also mentions in his report for S&TC that similar changes in population were seen in some other Scottish rivers and lochs.

Finally, Mr Graham Stewart was asked about Mowi’s desire to move farms to open water sites and he said that he would support such a move as long as it could be shown that the farms are not on migratory paths for wild salmon and sea trout. The interviewer then asked whether it is easy to establish these migratory paths and whether they can be mapped easily, or do they vary. Mr Graham Stewart replied that they do vary and that it will take investment and research to establish them. He added that he can’t say for sure because to date very little tracking of wild salmon and sea trout on the west coast has been carried out, but he is optimistic that in the next year or two, tracking will begin.

Over the years, we have repeatedly tried to reach out to Mr Graham Stewart so we can discuss these issues face to face. Unfortunately, he has never responded. Our door remains open.

1980: Some months ago, we acquired a large number of back issues of Trout & Salmon magazine stretching back to the early 1960s. We are keen to learn what views were expressed about the state of wild fish stocks over the years. Unfortunately, we just don’t seem to have the time or resources to complete this task at present. However, during a rare quiet moment we randomly had a quick glance through the issues for 1980. We learned three things:

We hope that we can start to look at what happened in other years and how any changes were being perceived at the time.

999: It seems that a local boatman recently observed a small yacht acting suspiciously alongside the salmon cages in Loch Shuna and called the police. Two local policemen were sent over to the cages to investigate. They found anti-salmon campaigner Don Staniford aboard a small yacht. The subsequent exchange was recorded by Mr Staniford, which he then posted on his website.

He has since complained that he has the right to navigate freely and that the police were effectively acting as private security for the farm owners. Certainly, yachts have the right to freely navigate around Scottish waters but whatever the intention, the police do have the right to investigate when there is suspicious activity. The local boatman had no way of knowing who was on the yacht or their intent.

Mr Staniford and one of his (few) supporters have written to the police to complain but we, at Callander McDowell, think he is simply trying to draw attention to his activities rather than have any legitimate complaint. This is because we know this is not the first time that Mr Staniford has been questioned by the police. During the Parliamentary investigations into salmon farming, Mr Staniford was acting suspiciously outside the Scottish Parliament and was approached by a police officer who asked him a few questions. We were at the Parliament then and watched this encounter. Mr Staniford did not subsequently write to the police to complain that he had been unfairly targeted. The police were just doing their job, just as they did when they investigated unusual activity around some salmon cages.

We would imagine that Mr Staniford would be the first to thank his neighbours in Heswall in the Wirral  if they saw people acting suspiciously outside his house and called out the police, yet would be quick to complain if the police failed to turn out to investigate.

The underlying question for us is why Mr Staniford appears to prefer to conduct his filming when no-one is about. If he is so concerned about salmon farming why not address the people concerned directly rather than sneak around at dusk and dawn trying not to draw attention to himself and his suspicious behaviour.