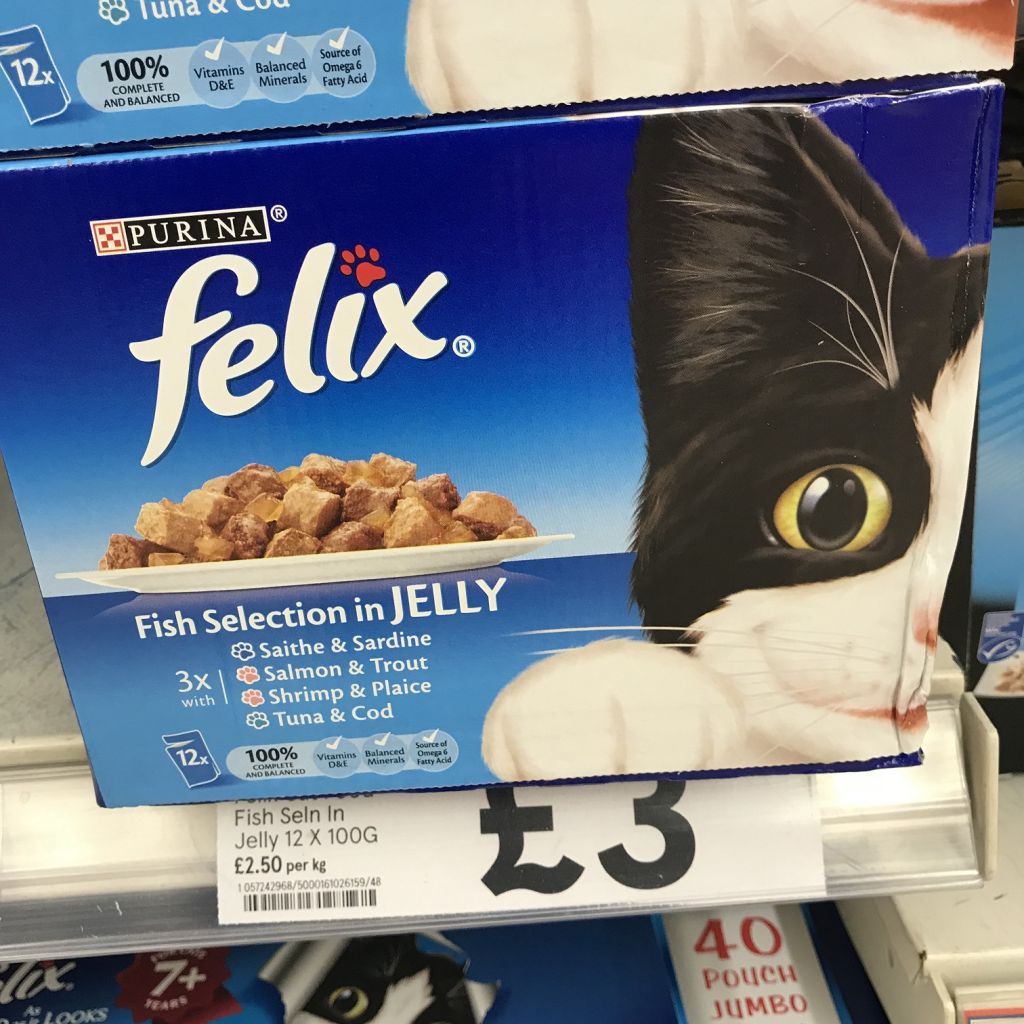 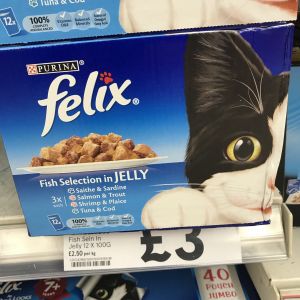 Our Feedback: Another week and another NGO emerges out of the woodwork to attack the salmon farming industry following a well-established script. This time, the focus is on the amount of wild fish being used in salmon feeds. The headline in the Scotsman states that salmon farming expansion is a threat to global fish stocks.

Let’s be totally clear. The expansion of the Scottish salmon farming industry is not a threat to global fish stocks. It’s not even a threat to local stocks. The report has been written by people who have no understanding of the industry and simply repeat the same old scaremongering that has been hyped for many years. In this case, the organisation ‘Feedback’ claim that the amount of fish that will need to be caught will have to increase by two thirds or about 310,000 tonnes. They say that around 460,000 tonnes of wild fish already are consumed by Scottish farmed salmon, which is about the same as the amount of fish consumed by the UK human population. Feedback say that the extra 310,000 tonnes required will place severe pressure on wild fish stocks and the ocean ecosystems and human communities they support. Frankly, we believe that Feedback are simply being over-dramatic. They simply don’t have a real understanding of the sector.

Unfortunately, given the opportunity to respond, the salmon industry failed to enlighten Feedback about the realities of forage fisheries. They simply replied that they are working hard to reduce the amount of wild fish used in feed through the incorporation of plant proteins, and fish processing waste. However, even without these measures, the expansion of the salmon farming industry will not result in a greater threat to wild fish stocks. We can only assume that Feedback, like other environmental groups believe that if salmon farming does not expand, the extra 310,000 tonnes of wild fish will not be harvested from the seas. Equally, if it wasn’t for aquaculture, there would be no need to harvest these wild fish. This is just a total ignorance about the fisheries for forage fish.

According to the FAO, about 20 million tonnes – we repeat 20 million tonnes of forage type fish are currently harvested every year for non-human consumption. This is just over 20% of the total wild fisheries catch. This harvest is not specifically for aquaculture use.

Historically, forage fish were harvested for their fish oil. The fish were pressed to extract the oil and the material left was sold off to be used as fertiliser because it was rich in nitrogen and phosphorus. In today’s more environmentally sensitive times, scattering dead fish on the land would seem a tragic waste and surely would be of concern to groups like Feedback campaigning to safeguard wild fisheries. Yet, fishmeal is currently being sold in British supermarkets and garden centres for the exact purpose of fertilising domestic gardens. Surely, if we are concerned about the state of wild fish stocks, the first stop should be to campaign against the use of wild caught fish as a fertiliser for domestic gardens. 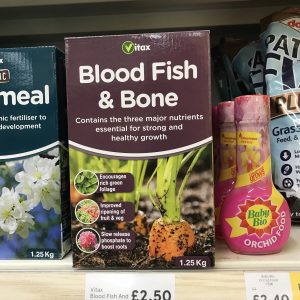 However, as modern agriculture improved, it was realised that this fish waste was a good source of protein and very small quantities could be used to boost the protein content of animal feeds. By the 1950s with the onset of modern broiler and pig farming, fishmeal became an integral ingredient in animal feeds and its usage was widespread. In fact, there are still people around who remember chickens having a very fishy taste.

The fact that terrestrial farm animals were being fed fishmeal never seemed to be of any concern to environmental groups. Even today, about 20% of fishmeal production goes to make specialist feeds for pigs and poultry, yet we never hear any outcry against such use. Clearly, organisations such as Feedback don’t seem bothered that wild fish are being harvested to feed such animals, but farmed salmon appear to be a different story.

When salmon farming started to take off during the 1980s, demand for fishmeal increased, after all, salmon are carnivorous and naturally eat fish in the wild. In fact, whilst critics complain that it takes between 2 and 5 kg of wild fish to produce 1 kg of salmon, in the wild the conversion is more like 12 to 1 making wild salmon greater consumers of wild fish than farmed.

The increased demand for fishmeal did not mean that more forage fish was being fished. Instead, it meant the price of fishmeal increased. As animal feeds are formulated using least cost, the higher price of fishmeal made it too expensive to use in most pig and poultry feeds. What was previously consumed by pigs and poultry was now being consumed by salmon. Far from increasing the catch of wild fish, there has been a steady decline as salmon farmers improve conversions and require less fishmeal.

If fishmeal inclusion continues on a downward trajectory due to farmers responding to criticism and using fewer wild fish in feeds, it does not mean, less fish will be harvested. Instead, as demand falls, so will the price, and again we will see more fishmeal will being used to feed pigs and poultry. This will lead to the ridiculous situation that because of environmental group pressure salmon, which normally eat fish will be fed on plant and insect protein, whilst pigs and poultry which normally eat plant and insect protein will be fed on fish. This is environmental control gone mad.

Of course, we have yet to discuss one of the biggest users of wild fish and that is the pet food industry. Because this is such a contentious issue, little research has been conducted. What we do know is that about ten years ago, human consumption of fish in Australia was 11kg a year whereas consumption of fish by cats was 13.7kg. At that time, about 2.5 million tonnes of fish was going into the pet food market, yet the environmental sector remains suspiciously quiet. This is because they know this is a battle they cannot win. It is a lot easier to attack the salmon farming industry instead.

Interestingly. pet cats, or at least their owners, don’t want any old fish in their favourite pets’ food. As can be seen, the menu is extensive. It wasn’t so long ago that US shoppers could even buy cat food made from Blue fin tuna. 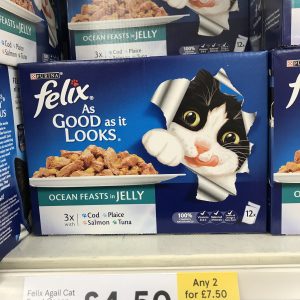 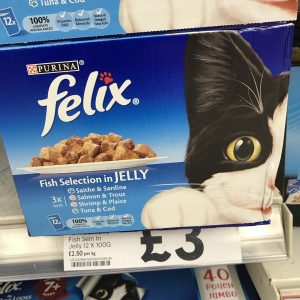 Loch Muir: So, whilst the SSPO have ‘sponsored’ a page in the Scotsman newspaper to get coverage, the paper has given free publicity to more nonsense from Don Staniford and his Salmon Watch campaign. The newspaper describes the initiative as from an environmental group and illustrates the report with an old picture of Mr Staniford handing over a petition to MSP Mark Russell outside the Scottish Parliament. We were present at this occasion and all we can say is that this is an environmental group of one.

Mr Staniford is now calling for citizen science for reporting of disease and welfare issues at salmon farming sites around Scotland. He wants kayakers, eco-tourists, ramblers and anglers to report any concerns. He also wants water samples to be taken for monitoring of infectious diseases, pathogens and viruses. We have seen many examples of Mr Staniford’s citizen science as he sneaks around farms at dusk and dawn, looking in bins etc in the hope of finding something worth filming.

One of his latest video offerings concerns his search for a sea loch from where M&S source their farmed salmon, specifically Lochmuir. This is because he has bought packs of M&S smoked salmon where the fish is described as ‘Lochmuir’ and he doesn’t believe that it is a real place. He is so desperate to find anything to use to criticise the salmon farming industry that the location of Lochmuir is a subject he repeatedly raises. He argues that consumers are being tricked into thinking that the salmon they buy comes from a loch in Scotland named Muir or Lochmuir.

Fortunately, consumers are savvier than Mr Staniford would credit them. After at least thirteen years in Marks & Spencer’s stores, they know that Lochmuir is a brand and not an indication of the loch in which they were raised. The fact that the word ‘Lochmuir’ is accompanied by a trademark symbol clearly shows that Lohmuir is a brand name not a place. We don’t think that Mr Staniford knows what TM means because he persists with this charade of trying to find the Lochmuir.

In his video, he also has a pack of M&S Scottish Lochmuir smoked Speybay salmon. Mr Staniford says that this is accompanied by a picture of the sea but there is no sign of a salmon farm. This is not surprising since the pack clearly states that Spey Bay is where the smokehouse is located. Rather strangely, whilst looking at the pack Mr Staniford then says, ‘it looks like wild salmon.’ This is despite the fact that the pack clearly states Lochmuir salmon and it has been extremely well publicised that there is a ban on catching wild salmon from the sea.

If Mr Staniford’s example of research using citizen science is anything to go by, then we cannot expect anything of any value. In fact, although Mr Staniford went into an M&S store to buy the two packs of Lochmuir smoked salmon, he clearly is unaware that M&S have changed their marketing strategy and have actually moved away from using the name Lochmuir on packs. The label on packs of raw salmon now state’ Scottish Responsibly Sourced salmon fillets. The pack also lists the specific farm at which the salmon were raised. 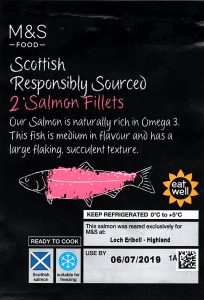 Mr Staniford is so blinkered by his quest to undermine the salmon farming industry that he can’t see the blindingly obvious. 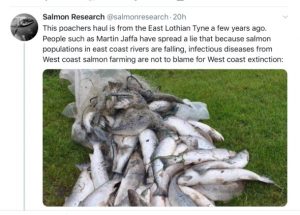 I am not sure the thought behind this tweet but as it clearly mentions me by name, I must respond. Firstly, as I believe others have mentioned, most of these fish are sea trout but regardless I am unsure of the point of posting the photo at all. I assume what Salmon Research means is a few years ago the east coast was so awash with fish that poachers could guarantee a good haul. Alternatively, does he mean that poachers have been so active on the east coast and stocks have been so decimated that they have collapsed?

However, the main issue with Salmon Research’s tweet is that he says that I am spreading a lie. The lie is that because salmon populations in east coast rivers are in decline, then infectious diseases are not to blame for west coast extinction.

What I have said, in the case of salmon stocks, is that as the percentage of returning adults has decreased from 25% in the 1980s to less than 5% now, the problem is affecting all salmon rivers, no matter their location. As west coast rivers tend to be short spate rivers, the size of their total stock tends to be small, so any declines became quickly apparent. By comparison, the long meandering east coast rivers have a much larger stock of wild fish and it has taken much longer for the declines to become noticed. As a general guide, even before the advent of salmon farming, the divide of the total Scottish salmon catch between east coast rivers and those from the west was 90% to 10%. In effect, there are nine times more fish in east coast rivers than in the west. Thus, it is not really that surprising that it has taken longer for the problem of fewer returning salmon to become apparent along the east coast.