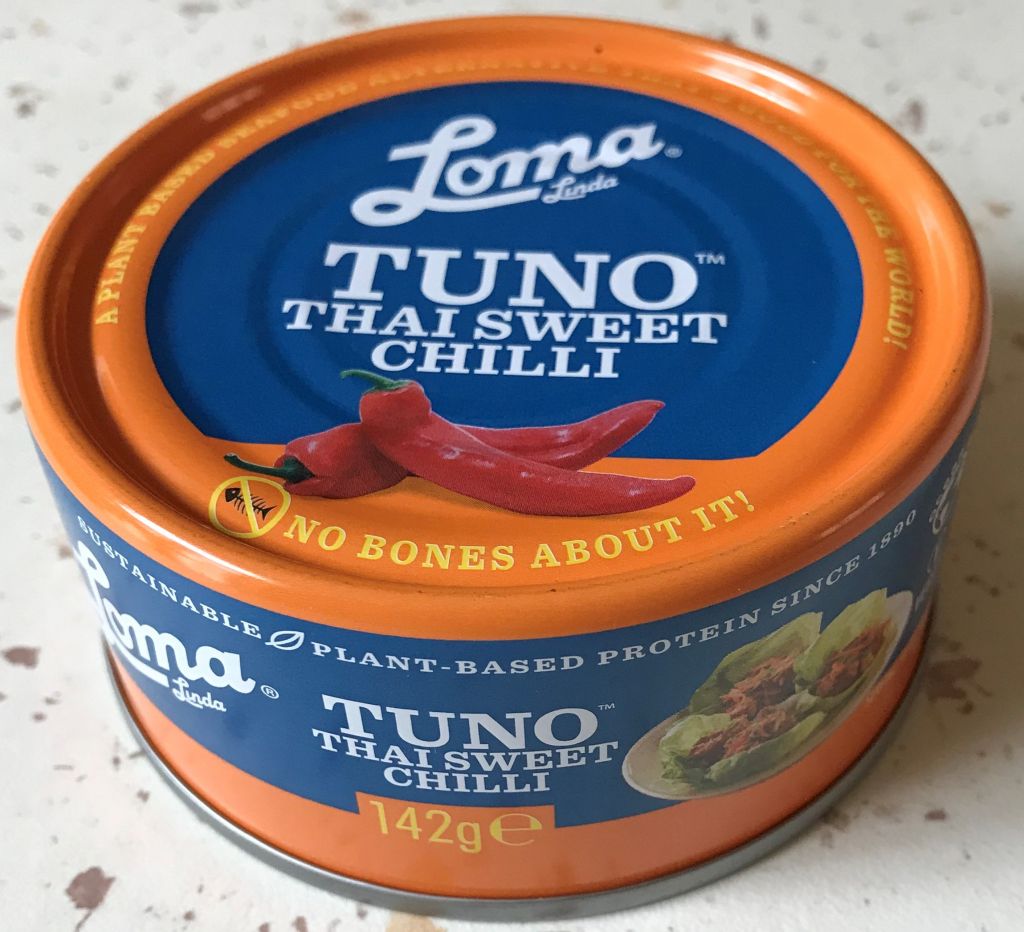 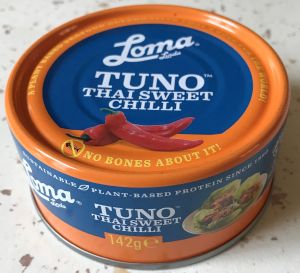 Drugged: Earlier this year, the Times newspaper reported that Londoners are now taking so much cocaine that the class A drug has been identified in the waters of the River Thames. After it had been urinated by users, the cocaine was detected in wastewater at a monitoring station near the Houses of Parliament. The drug has been found at levels that are thought to be damaging to wildlife. In a separate study, eels were found to be hyperactive when exposed to the high levels of cocaine.

We have previously discussed the number of rivers in England contaminated with powerful flea treatments. The Daily Telegraph had reported that high levels of imidacloprid have been found in rivers ranging from the remote Scottish Cairngorms to the River Ouse in Bedfordshire. Imidacloprid is commonly used to kill arthropod parasites on pets and other small animals such as dogs, cats, rabbits and ferrets. Currently there are 68 registered veterinary products containing the chemical for the treatment of fleas. The river Tame in Manchester is so contaminated that levels exceed chronic pollution limits. The chemical is thought to end up in river water when dogs enter streams and other bodies of water.

This week, the Times reports on a new study of rivers in 72 countries that found levels of antibiotics that in some cases exceeded ‘safe’ levels by up to 300 times. The extreme limits were found in rivers in several developing countries, but levels of concern were also detected in many European rivers. The research team is now planning to assess the environmental impacts of this antibiotic pollution on wildlife including fish.

Rivers are clearly awash with drugs of all types that originate from humans and their pets. It is possible that farm animals are also depositing drug residues into the aquatic environment. This combination of potent drugs may have a damaging impact on stocks of river fish including salmon.

Clearly, there are many pressures on salmon stocks but one aspect of the decline noticeable from last year’s catch records caught our attention. Those rivers that performed worse appeared to be in the more southernly parts of Scotland whilst the rivers in the north east produced much better catches. A tweet posted this week from the River Carron (east coast) stated: “What a day’s fishing on Gruinards (beat). 21 salmon to 3 rods – top rod had 15. This is spring fishing at its best. Total could go up as they are still fishing.”. 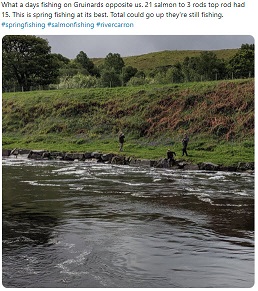 Anglers fishing other rivers could be green with envy, ever hopeful that they might catch even one salmon and yet on the River Carron, one angler managed to catch 15 salmon in just one day. Yet in the same week, the press reported that jobs might be lost due to the poor fishing (see later).

This phenomenal catch from the River Carron shows that the northern rivers are still doing well despite declines elsewhere. One idea that has been mooted is that the more southern rivers have suffered due to higher temperatures caused by climate change, whilst those in the north have not. Yet, Scotland is not so large that it might be expected to see a significant temperature range between north and south for long enough to have such an impact. However, it is something that should still be considered.

Could it be that some of the southern rivers are surrounded by a much larger human population than those in the north? With more people, there is a greater likelihood that class A drugs, antibiotics, flea treatments, not forgetting feminising hormones, could end up in local rivers. These ‘invisible’ chemicals might be impacting directly on the local salmon stock and yet we simply don’t know. Equally, and to the best of our knowledge, it is something that isn’t even being considered, let alone being researched. Instead, everyone’s attention is being directed by a few vocal critics towards the impact of salmon farming on wild fish, even though the impacts are unproven but if they were, would only impact on 10% of Scotland’s salmon stock.

Jobs, jobs, jobs:  The journal ‘Scottish Farmer’ reports that the Scottish Gamekeepers Association, which represents workers such as ghillies, boatmen and bailiffs has warned that there is now a genuine threat of job losses due to declining fish numbers. The group believes that falling rod catches, competition and ‘a lack of a central vision’ has seen assets and investments decline. Yet, it was only four years ago that the Herald reported that a half mile long salmon beat on the River North Esk together with a fishing lodge went on sale for £2.65 million!

The SGA want the Scottish Government to convene a ‘short term priority group’ to establish a timeline of supported actions to safeguard the sector. They say that there is no longer time for piecemeal actions, which is why a timeline of actions needs to be drawn up and followed through.  We can only wonder if the SGA are aware of the forty- page NASCO implementation plan to help safeguard salmon stocks in Scotland. https://www2.gov.scot/Topics/marine/Salmon-Trout-Coarse/fishreform/licence/status/nascoip

The SGA say that crucially the Government needs to listen to the men and women who have worked these rivers for years, yet at the same time, catches have fallen on their watch.  The SGA say that amongst priorities river workers feel need to be addressed are the impacts of predation, barriers, industrial water extraction and disease, all of which are already widely discussed.

‘Scottish Farmer’ points out that from every 100 smolts heading to sea only five adult salmon return. The SGA say that many of the problems facing salmon are at sea but that issues at home should be addressed first. This includes the numbers of predatory seals and dolphins as well as goosanders and cormorants. They say that the situation must be stabilised before any more of what is present now is lost. They also argue that long term improvements of habitat are all very well, but tree lined rivers are not going to stop salmon mortality tomorrow.

Meanwhile, the SGA say that the in the west, jobs have already been lost as previously prolific rivers have collapsed following the growth of salmon farming. The SGA say that as workers in a rural industry, we appreciate the jobs salmon farming creates, but equally we don’t want to see a loss of employment in our own sector.

The SGA says that the inability to get on top of sea lice infestations and the impacts this has on wild fish cannot now be scientifically ignored. SGA members are also seeing impacts from mass escapes from farms which affects the genetic purity of wild fish lessening their ability to survive.

Yet again, the focus is directed towards salmon farming as being the villain. According to the SGA, jobs have been lost over many years since the arrival of salmon farming. As these jobs have already gone so surely the emphasis must be on safeguarding existing jobs on the east coast. This is a part of Scotland where salmon farming does not exist. How is directing attention towards salmon farming in the north west of Scotland going to safeguard jobs on the Tweed, Spey, Tay and Dee? Its simply a matter of finding someone to blame and salmon farming is an easy target. Yet it is worth remembering that, according to the latest FMS Annual Review, the River Tay salmon catch was 4,483 fish against a ten-year average of 7,930 whereas the River Carron in the heart of the aquaculture zone produced 243 fish against a ten-year average of 237 fish. We would also mention again that nearly half the fishery districts in the aquaculture zone have rivers that have been deemed by the Scottish Government to be exploitable i.e. that fish can be caught and killed.

One of the issues arising from this report is that of genetic purity. This is something that we will pursue in the next issue of reLAKSation.

Finally, it may be worth mentioning that jobs were lost after the angling sector demanded the closure of commercial netting. We don’t think much thought was given to the plight of the netsmen.

Berbyelva:  The Panorama TV programme again exposed the public to not nice-looking images of a small number of fish that had succumbed to issues within a salmon farm. We saw the following image posted on Twitter of a fish caught from the River Berby in Norway near the Swedish border. The comment was that the fish died, and no-one knows why?

The nearest salmon farm is at least a couple of hundred kilometres away and that farm is located well away from the main farming zones.

Wild fish get sick and die too.

I’m me: This week, the organisation, PETA (People for the Ethical Treatment of Animals) placed an advert near Edinburgh’s Dynamic Earth, the venue of the 2019 Aquaculture Awards (congratulations to the winners). This said ‘I’m Me not Meat – See the individual. Go Vegan’ with a picture of part of a salmon. 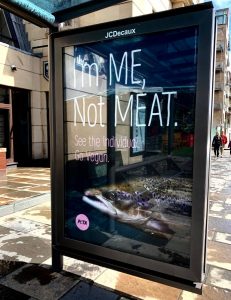 PETA said that the event is an ideal opportunity to remind everyone that just like other animals, fish feel pain and fear, have unique personalities and value their own lives. We are not sure how they know that, but they continue to say that by leaving fish off your plate, then the lives of countless animals can be saved whilst taking a stand against an environmentally destructive global industry that harms millions of sentient beings every day. To avoid making fish suffer, PETA say that the public should adopt a vegan diet.

By coincidence, this week Morrisons supermarket launched a range of new vegan products under the label Tuno – a replacement for tinned and pouched tuna. Tuno comes in a variety of favours such as Lemon Pepper, Sweet Chilli and Sesame Ginger. We bought a can of the Sweet Chilli and a pouch of the Sesame Ginger Tuno to taste.

We have had some difficulty in trying to describe the contents of both packs. These can be seen in the accompanying photos. However, describing the taste was much easier. In our opinion, the nicest way to describe them was that they were unpalatable. 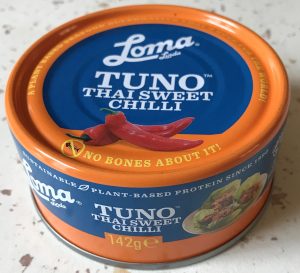 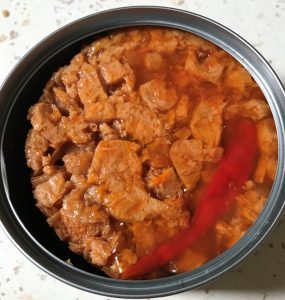 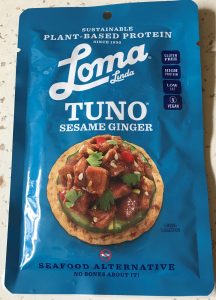 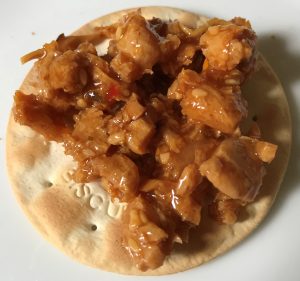