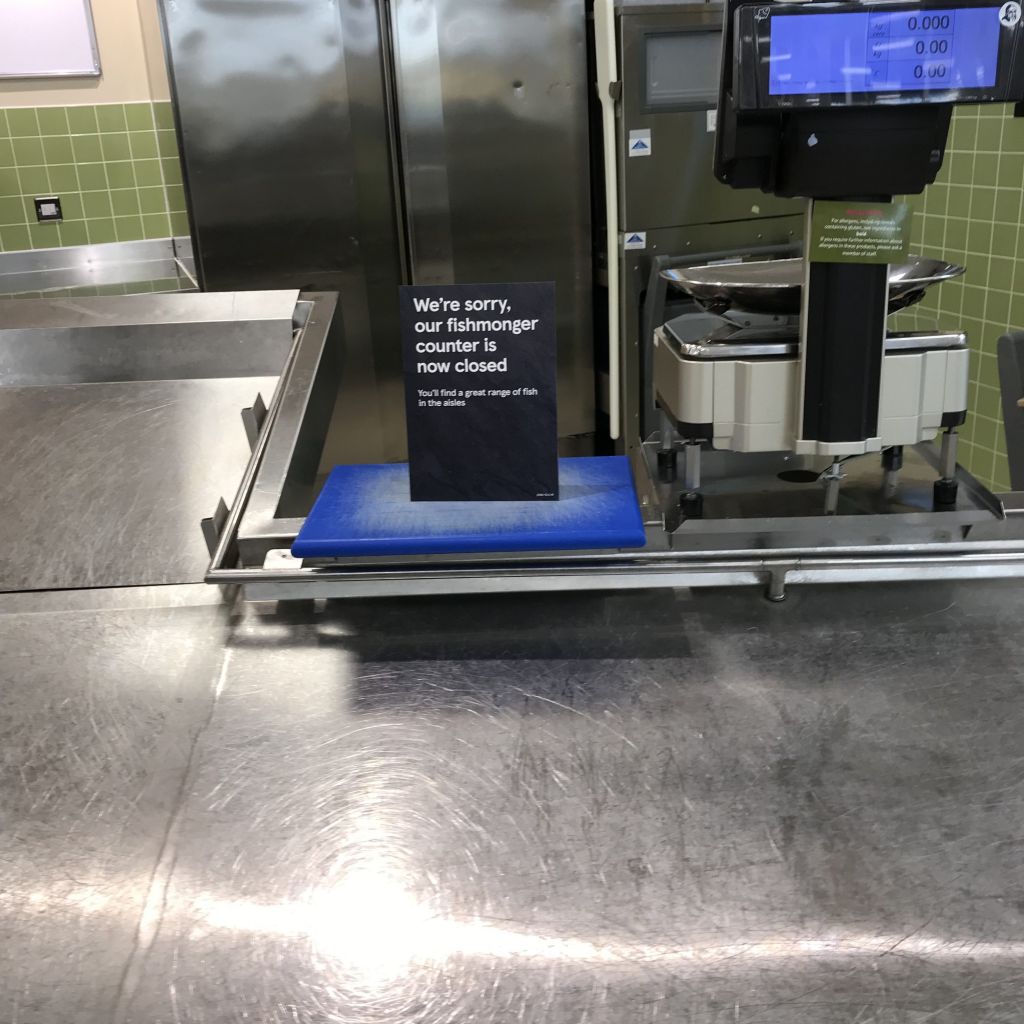 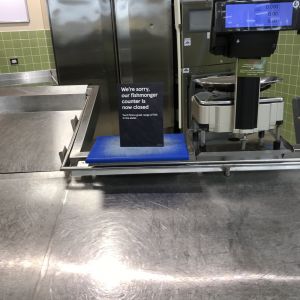 Good growth?: Seafood Source report that according to the Food & Agriculture Organization (FAO), per capita global fish consumption grew from 9kg in 1961 to 20.2kg in 2015. Preliminary estimates for 2016 and 2017 point to further growth to 20.3kg and 20.5kg respectively. However, whilst the average is around 20kg per head per year, consumption does vary significantly across and within regions because of cultural, economic and geographic factors. Consumption can be as low as 1kg in areas such as Africa and as high as 100kg in Asia. In 2015, more than two-thirds of fish supply was consumed in Asia. Within Asia, China consumes nearly 40% of the global; total of fish and its capita consumption has reached 41kg.

Despite an average annual growth of consumption of 3.2% from 1961, consumption growth is forecast to fall to about 0,4% up to 2030, although capita consumption is expected to continue to increase, except possibly in Africa.

The FAO highlights that many consumers in advanced economies have a wide choice of value-added fish products and are not deterred by price increases, yet consumption has been approaching a ‘saturation point’ in terms of quantity. In fact, according to FAO, capita consumption in the EU and US has slowed in the past few years, whilst capita consumption of poultry has increased.

We, at Callander McDowell are not sure we agree with the FAO with regard to consumption in developed countries. Far from reaching a saturation point, consumption appears to be in decline in relation to some consumption parameters. In the UK, home consumption of fish is in free-fall. It isn’t even necessary to look at graphs or figures to see this decline. The following two images speak for themselves. 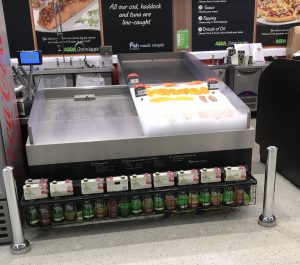 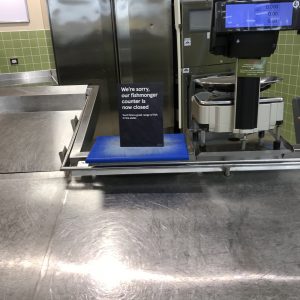 It is not as if consumption in the UK is near ‘saturation point’. Many consumers don’t even eat one portion of fish a week, let alone the two portions that is recommended. The 2040 seafood strategy for England aims to bring about a doubling of consumption to the recommended two portions a week. We suspect that the strategy’s authors will be no longer available in 2040 so won’t have to account why this goal has not been met. If the current trends are not reversed, fish consumption will hardly register within overall food consumption. We actually need a strategy 2025 not 2040. It has to happen now, or it won’t happen at all. Even 2025 might be too late.

What is needed is radical change, otherwise UK consumers might find that if they want to eat fish at all, they may have to travel out to the Far East, because that’s where all the fish will be found.

The Good and the Bad: We have been inundated with emails asking if it was us and the answer was no. What might have been us? This week, a diner at one of our favourite eateries in Manchester was inadvertently served a bottle of Chateau Le Pin Pomerol 2001 costing £4,500 after ordering a £260 bottle of 2001 Chateau Pichon Longueville Comtesse de Lalande. 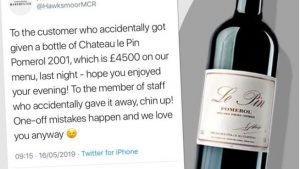 The restaurant Tweeted about the error and to say the story has gone viral is an understatement. It has appeared in every newspaper and on TV and radio news. It has amused a lot of people and has been great publicity for the restaurant. The coverage they have received would likely have cost millions rather than the £4,500 cost of the wine (and for the record, our usual tipple is August Town lager at £4.85) It was never easy to get a table there, we now expect it will be impossible.

This week we also noticed a tweet from salmon farming critic, the anonymous ‘Salmon Research’ who claims to be an environmental scientist. 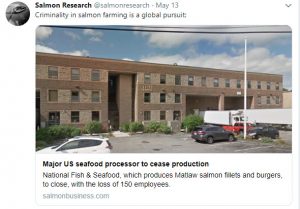 The story concerns the bankruptcy of the Pacific Andes who owned National Fish but highlights that in the past, its founder was convicted of failing to pay taxes. This and other criminal prosecutions had prevented the sale of the company and now Salmon Business reported that the company had creased production. Salmon Research tweeted that ‘criminality in salmon farming is a global pursuit’.

Sadly, Salmon Research didn’t live up to its name and invest in a little research. If it had, it might have discovered that the salmon produced under the Matlaw brand is in fact wild caught Pacific salmon and not farmed salmon at all. The claim that salmon farming has something to do with this past criminality is simply nonsense. 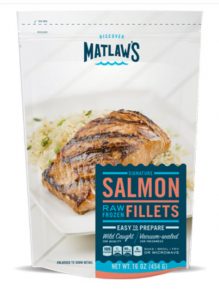 This is very much the bad side of Twitter in that those with their own agenda can say what they like without any proof or verification. Anyone following Salmon Research, or his tiny band of Twitter acolytes will know that most of their output bears little resemblance to reality. The problem is that any attempt to challenge ends up with them running a mile.

In our opinion, Salmon Research should change its name because the one thing that doesn’t seem to be done is research.

What’s the catch?: Following our suggestions In the last issue of reLAKSation  as to how to try to improve the state of salmon stocks in Scotland, we have been asked why should anglers adopt these measures when salmon farming does not appear to want to mitigate against the impacts of sea lice on wild fish.

There is a very simple answer. As yet, no-one from the wild fish sector has been able to convince us, at Callander McDowell, that there is anything other then a minimal impact on wild fish from salmon farms. At the risk of repeating ourselves again, even the report commissioned by Salmon & Trout Conservation identifies an impact of about 1%. So far, no-one has suggested that our assumption from this report is incorrect.

This continued focus on salmon farming, which occurs only around one part of the Scottish coast is in part due to the advice given to Government. In an article written for the British Ecological Society, one Government scientists states:

“Much of the life of salmon at sea remains poorly understood, and therefore management efforts have focused on those factors that can be controlled” and of course aquaculture is seen as one of the main factors that can be controlled. The focus on salmon farming is simply because Government scientists have run out of ideas of what else to do. The list of twelve pressures identified by the Government and published on the Government website shows a focus on the same old issues that have been discussed repeatedly and offers little new is the expectation that the decline in stocks might be reversed.

Of course, there is a reluctance for the wild sector to curtail fishing activity. This is not because it might protect stocks but rather because it would restrict income. It is argued that the wild sector needs this income to help improve habitat management. However, there is also an argument that reduced fishing pressure might help improve stocks regardless of any habitat improvement. It also seems rather mercenary to charge anglers to fish when there is little prospect of them catching anything.

Its so much easier to deflect attention onto salmon farming as the main focus of remedial action. It was interesting to read in the latest issue of Fish Farmer that Dr Bob Kindness, the River Manager for the Carron sampled over 300 sea trout and finnock in both 2017 and 2018  and found that 90% of the fish were free of sea lice and exhibited no fin damage despite the proximity to the largest aquaculture hub on the west coast. The wild fish sector seems to ignore such observations persisting with the view that wild fish on the west coast are heading for extinction.

Interestingly, Corin Smith, the salmon farm critic, who is now affiliated with Salmon & Trout Conservation also runs his own salmon guiding company. He is currently advertising fishing holidays in Wester Ross, in the heart of the Aquaculture Zone from £755 for three days. Surely, anglers wouldn’t pay to fish on the west coast if they thought they were unlikely to catch anything! Maybe wild fish on the west coast are not so extinct as the wild sector makes out. Given that Marine Scotland Science have deemed nearly half the fishery districts on the west coast to have at least one stock that can be exploited, perhaps anglers can expect to catch a fish after all. 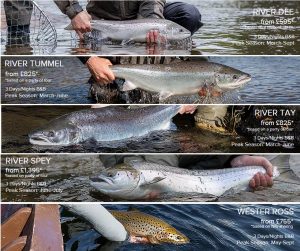