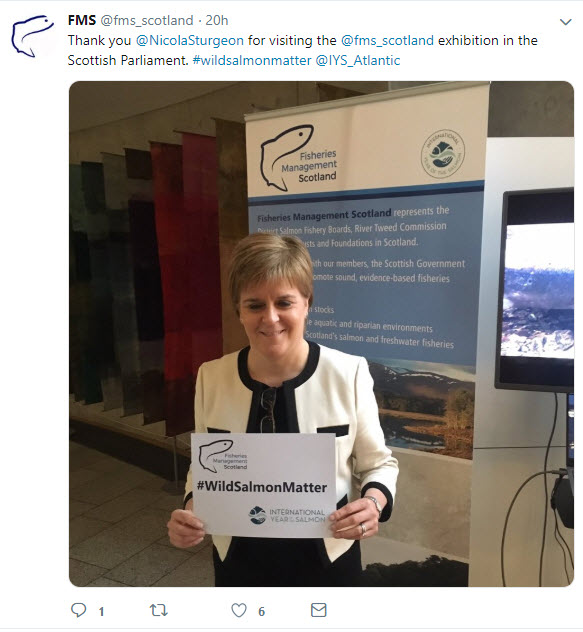 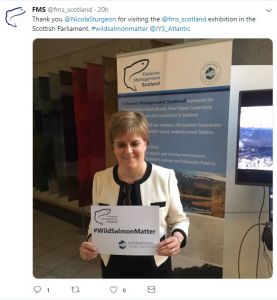 Help: Last week, Fisheries Management Scotland (FMS) set up stall at the Scottish Parliament to try to increase awareness of the plight of wild Atlantic salmon in Scottish rivers.

According to the Sunday Post, FMS are urging the Scottish Government to take immediate action to safeguard stocks. FMS have already received extensive press coverage about their concerns whereas the Sunday Post spoke to Archie Ferguson, President of the Scottish Anglers National Association for his view. He told the paper that ‘First and foremost, our government and tourist organisations should do more to acknowledge the contribution that salmon angling, and country pursuits in general, make to the rural economy of Scotland. Maybe then people will sit up and take notice.’ He added that ‘The general consensus amongst anglers is that an industry worth over £120m to the economy, supporting in excess of 3,000 jobs and generating an average spend on fishing trips to Scotland by tourists of around £5,000 per trip is largely being ignored. That has to end.’

If it were just about protecting the salmon, then what should be done is a no-brainer. Clearly, there should be a complete ban on fishing for any game fish. However, there will be such an outcry, unlike when a ban was imposed on commercial netting, that such a ban will never even be considered.

The angling fraternity are seeking Government help to protect wild salmon but actually, they could take immediate unilateral action without any need to seek approval from the Government. Currently they are demanding that salmon farms be moved onshore, even though we firmly believe that this will not make the slightest bit of difference to the state of salmon and sea trout stocks. Ideally, they would want to control fish eating birds as well as seals. This is in addition to the ban on salmon netting that they had previously demanded. Oddly, they don’t want to see any controls on their own activities, however, remedial action that they could take now includes:

The angling sector always blame anyone and everyone but themselves for the decline in wild fish numbers. We, at Callander McDowell, have been repeatedly told by anglers that only anglers know what is best for wild fish. Perhaps the time has come for them to step up to the plate and take some of the responsibility themselves.

Returning to the attendance of FMS at the Scottish Parliament, they recently tweeted that they were raising awareness of some of the fish and fisheries issues and achievements. We are certainly aware that one of their achievements has been that wild salmon catches have dropped to an all time low whilst on FMS’s watch! 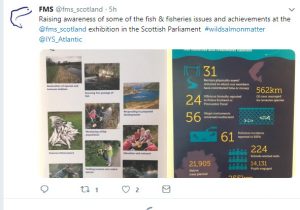 Finally, FMS persuaded most of the politicians visiting their stand at the Scottish Parliament to pose for a photograph holding a placard with the words ‘Wild Salmon Matter’. Would this include the 2,475 wild salmon (and 1,424 sea trout) killed last year by anglers for sport? 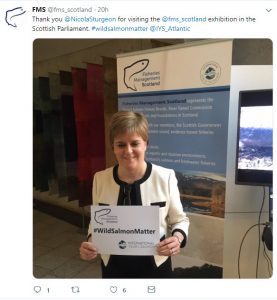 The X Factor: In 2011, the Rivers & Fisheries Trusts of Scotland (RAFTS) issued a graph comparing salmon catches from the east and west coasts of Scotland. This recorded percentage change from 1970 and it suggested that catches from the east, where there are no salmon farms, were not just healthy but also growing, whilst those from the west coast, where there is salmon farming, showed a decline. The message issued by RAFTS was that salmon farms were negatively impacting on local catches. Salmon & Trout Conservation (S&TC) repeated the same graph and message in subsequent years.

He claims that between November 2016 and August 2017, sea lice levels on some Shetland salmon farms were ‘massively above the industry’s code of practice trigger threshold for treatment’. He says that some of the numbers were ‘eye-watering’ and that in one week, the average number of adult female sea lice per fish was a ‘staggering’ 29. Mr Graham Stewart writes that at the time he said that ‘it is no wonder that mature wild sea trout have been wiped out in these islands’. He continues that ‘in the last eighteen months there has been little improvement in sea lice control and Shetland remains a hotbed of lice production’.

He says that what this means is that any wild salmon smolts passing within 20 miles (studies shows that elevated levels of sea lice emanating from a farm may be found up to a distance of 31 km) either side of Shetland are highly vulnerable to picking up lethal infestations of the deadly parasites. However, he points out that ‘there is scant knowledge of the migration routes taken by smolts from Scottish east and north coast rivers but a cursory glance at the map suggests that it is a reasonable supposition that they will pass close to Shetland as they head north towards the feeding grounds of the North Norwegian Sea.’

Unfortunately, it is not just migration routes that Mr Graham Stewart’s knowledge is scant, so his his knowledge of sea lice infestation. There is a scientific paper which claims based on statistical analyses, that sea lice can be infective up to 31km from a salmon farm, but analyses of the raw data does not support this view. Sea trout infested with higher levels of sea lice can be just as likely to be found in areas without any farming. There appears to be no correlation with distance from a farm.

However, where Mr Graham Stewart’s argument is significantly flawed is that salmon farming has been established in Shetland since the 1980’s and sea lice have always been present. How is it that Shetland farms are only now implicated in changes to east coast rivers yet were never considered before? The answer is simple. The reality is that despite Mr Graham Stewart’s view that sea lice from salmon farms are responsible for the decline in wild fish stocks across the west coast, any impacts are minimal. Mr Graham Stewart, like many in the wild fish sector, simply equates sea lice infestations on a handful of sampled sea trout with increased levels of mortality whereas the two are not related due to aggregated parasite distribution.

In his commentary on the S&TC website, Mr Graham Stewart says that in conversations with river managers over the last year or so, most had never considered the possibility that Shetland salmon farms are responsible for the decline of east coast stocks. This is because most river managers are not so fixated on blaming salmon farming for the demise of wild salmon and sea trout across Scotland.

It is interesting that during his presentation at the Premier of the film Artifishal, Mr Graham Stewart reiterated his view that whilst stocks are in decline in Scotland, only those on the west coast have collapsed due to salmon farming. Why didn’t he mention Shetland then?

Price of salmon: We don’t like to continually give air to critics of the salmon farming industry, but we also firmly believe that their nonsensical claims should be corrected. In his latest posting, Corin Smith says that he recently spotted a 120g pack of salmon in Marks & Spencer selling for £29.17/kg. He doesn’t mention the actual selling price of £3.50. He argues that from a farm gate price of £6.45/kg very little goes to the local communities. He also questions where the £22.72/kg margin goes after the fish is sold at farm gate prices.

Unfortunately, Mr Smith paints a very misleading picture. He has picked the most expensive presentation of salmon available in M&S. We could ask why he didn’t use the example of the bag of M&S tail fillets which sell for £17.77/kg. The answer is because it doesn’t support his argument. It is of no surprise that packs of one portion foods are always much more expensive than larger packs and salmon is no different. This is why most retailers don’t sell single portions. They would be too expensive for their customer base.

M&S singe portion salmon does sound expensive but equally all food in M&S is more expensive than in other stores. For example, the cheapest sirloin steak costs £21/kg whereas in Asda the price is £16.21/kg. By comparison, a pack of two salmon portions in M&S is £22.92/kg (single portion £29.17/kg) and in Asda, it is £13.29/kg. M&S sell all their food at a premium.

We don’t except Mr Smith would visit his local supermarket to buy a whole salmon but if we take a trout as an example, a whole trout costs £5.50/kg in Morrisons whereas trout fillet costs £14/kg. The reason is that when you buy a whole fish there is a lot of waste, which cannot be sold. The same applies to salmon. Mr Smith wonders how a farm gate price of £6.45/kg can turn into £29.17/kg without someone profiteering. The reality is that the whole fish price comes with guts, fins, bones and a head. The fillet price is pure edible flesh. From the farm gate the fish has to be transported (transport company wants to make some money) to a processing factory (who also want to make some money). The fish has to be packed and labelled (at a cost) and transported to the retailer (by transport who want to make money) and then to the retailer (who would also like to make some money even though it is well known that retail margins are relatively low).

By comparison, the typical angler just knocks the fish he/she catches on the head and takes the fish home to cut up and cook at no extra cost. Its not surprising that Mr Smith doesn’t really understand the retail sector or its supply chain. He is more used to getting his salmon direct out of the river and then wonders why there are none left.

Things ain’t what they used to be: According to Fishupdate, DNB seafood analysts Alexander Aukner doesn’t think that salmon demand is what it used to be. He told the audience at an eve of exhibition seminar in Brussels that it was quite natural that demand was not what it used to be because the price was twice as high. He said that between 2017 and 2018 there had been marginal supply growth but that the price dropped in both those years. He argued that negative price developments have happened before but that they can be explained easily such as when the Russian market closed.

Unfortunately, Mr Aukner suffers the same problem as other analysts in that they rely too heavily on graphs without really understanding the dynamics of the marketplace. The reality is that demand for salmon is as strong as ever and that if the industry doubled production, it could still sell every kg produced as long as the price is right. The problem for the salmon industry is that the price is artificially high and has little bearing on consumer demand. The 4’p’s of marketing suggest that prices have to be at the right level for any specific market. We often use the example of Rolls Royce cars which cost over £250,000 and for which there is only a limited market. By comparison, Ford produces lots of Fiestas because they are affordable to a much wider consumer base.

Analysts often give the impression to the industry that they can produce more Rolls Royce priced products but without thought as to who will buy them. The real potential of the salmon industry is to produce many ‘Fiestas’, but to add all the bells and whistles to turn a more basic product into a top of the range model.

Analysts are typically more interested in the short-term, whereas the future of salmon farming is a much longer-term prospect with diversification and the addition of value. We should look forward not back to how things used to be.