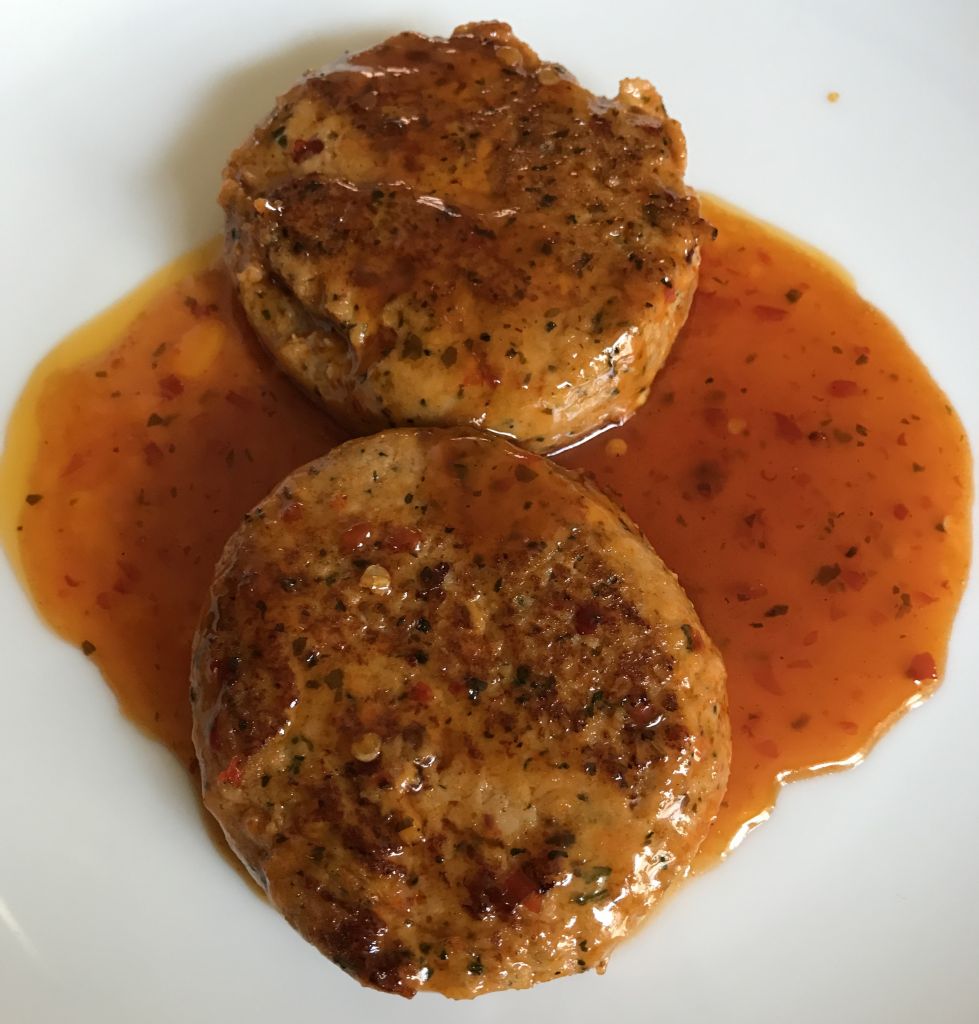 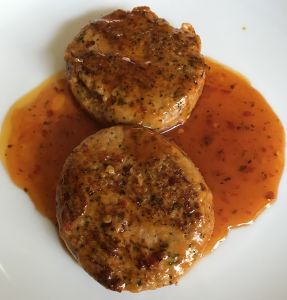 Salmon in numbers: The National newspaper reprinted an article from The Ferret which reports that at least nine million fish have been killed by diseases, botched treatments, poor handling and other problems at salmon farms around Scotland since 2016. Campaigners say that the ‘shocking reality’ of the fish farming industry means that expansion plans should be halted, and tougher regulation imposed. The Ferret reports that over the last three years, 760 mass deaths have been reported to the Scottish Government with some fish farms and hatcheries losing up to half their stock.

We, at Callander McDowell, are regularly accused by critics of the salmon farming industry of obfuscating the facts. Whilst we would not dispute the numbers, the reality is that they need to be put into context and not just used selectively to create a sensationalist news story.

If these 9 million fish are considered against total production over the last three years, then the overall mortality equates to about 7%. That means that 93 out of every 100 fish are grown through to harvest. Unfortunately, 7% mortality does not sound very sensationalist, so the critics prefer to highlight specific incidences where mortality rates are high.

For example, The Ferret reports that over half a million fish died in just one incident on 14-15 August 2018 at a hatchery in Glenmoriston. This represents a mortality of 28% and was the result of an oxygen supply failure. These were small fish still in their freshwater phase and not really comparable to a mortality involving large harvest ready fish. Of course, no farmer wants to see any fish die but not all young fish are equal, and the weaker will die along the way. In this incidence, the deaths were caused by a malfunction in the equipment. This highlights the fragility of working in closed containment, something that the critics are keen to see being used for all stages of production.

Salmon farming critic, Corin Smith, told the Ferret that ‘if we saw fields of sheep, cattle or pigs with 50% of the stock dead, people would be sent to jail. By coincidence, this week the Herald newspaper reported that there has been a huge rise in farm animal deaths. 450,000 sheep were reported to have died over the last year. The main cause has been the extreme weather including the Beast form the East. This mortality equates to about 7% of the national flock which is about the same overall mortality experienced by the salmon farming industry. We don’t’ see Corin Smith, someone who says that he was brought up on a sheep farm, demanding increased regulation for sheep farmers or that sheep farmers be sent to jail.

Of course, Mr Smith doesn’t blame sheep farmers for the decline of wild salmon stocks, but he does blame salmon farmers. The problem for us is that Mr Smith and the angling lobby do not show how any salmon farming activity is actually linked to the decline of wild salmon. This is even more apparent now that east coast rivers are also in such a perilous state. We will be accused again of obfuscating the issues but where is the evidence? Even the REC Committee inquiry instigated by the angling sector stated that there was a distinct lack of evidence to link salmon farming to wild fish declines.

The reality is that there are much wider issues affecting wild salmon and sea trout stocks. Salmon & Trout Conservation recruited Sir David Attenborough to front a video appeal to safeguard wild fish yet anyone watching his TV programmes cannot be blind to the fact that our planet is changing and such changes will have a greater impact on migratory species, such as wild salmon, than we could ever believe.

No wants to see any farm animal die, but mortality is what happens in farming. If the angling lobby wants to safeguard stocks of wild fish for future generations then they need to address the bigger issues rather than pick on the easy target.

Lack of evidence: One of the presentations given at the recent Fisheries Management Scotland conference was from Dr John Armstrong of Marine Scotland Science in which he briefly discussed the SARF project to investigate the impact of sea lice on wild stocks. We have previously mentioned this three-year £610,000 project but now we would like to consider it in greater depth. As the project raises many issues, we intend to consider it over a number of weeks. This time we will look at the project design.

The aim of the project was to compare the return rate of two sets of smolts, one of which had been treated with an anti-sea lice product. The idea is that protected smolts should not succumb to sea lice on their migration, whereas untreated smolts might. The difference between the number of returning fish from each group will then reflect the impact of sea lice on fish in the wild.

This project was not unique. Similar trials have been conducted in Ireland and Norway and they found that the impact of sea lice was about 1%. Unfortunately, the wild fish sector refuses to accept this figure arguing that the impact must be greater, even up to 50%, although there is no evidence to support this view. This meant there was pressure on Marine Scotland to conduct a Scottish trial to show that whatever the case in Ireland and Norway, Scotland was different.

Our view is that any differences between wild-caught and hatchery fish are irrelevant. We hear, time and time again that wild fish stocks along Scotland’s west coast are close to extinction (despite many rivers being classified as exploitable). It seems incredible that using west coast wild caught smolts as experimental animals was even considered. These survivors should have been given every chance to follow their natural lifecycle rather than being messed about for experimental reasons. It makes absolutely no sense. Given the results, the argument for better survival seems questionable.

Having decided to use wild caught smolts, Marine Scotland Science selected the River Lochy to conduct their trial, specifically, the Loy and Lundy burns. These are known to be grilse burns so that typically the fish return after one year at sea as grilse rather than as multi-winter fish. However, in recent years fewer grilse have been returning to Scottish rivers, which may be part of a longer-term cycle. This means that even if the smolts survive, they may not return as grilse to these burns within the experimental timescale.

Finally, half the experimental fish had to be treated with an anti-sea lice treatment. Other researchers have used SLICE, however using wild caught smolts makes this difficult so Marine Scotland Science opted to use a bath treatment known as Substance EX. This is an unlicensed product which we understand might be used against termites. In the final report, Substance EX is named as FLUX and the manufacturers are seeking market authorisation. However, Substance EX does not have a licence and therefore it is unclear if it has any deleterious effects on the fish and especially it is unknown what happens when it is used in combination with an anaesthetic. During the FMS conference, one delegate told Dr Armstrong that he was horrified that any treatment was being applied to these wild fish. He has a point.

The results found that out of 3,231 treated and untreated smolts, 2 grilse, one treated, one untreated returned.

In our view, this project was doomed to failure. The Irish study released over 350,000 smolts whereas this trial released just over 3,000 into the west coast river. We know that return rates are already less than 5%. It has been suggested that on the west coast it could be just 1%. This trial did not even achieve that.

50% Millennials: The latest news from Seafish is that millennials are eating 50% less fish than their grandparent’s generation. Unfortunately, the press release does not indicate how this low consumption can be increased.

Instead, SeaFish has linked this depressing statistic to a new report in the Lancet that cites one in five deaths in the world is due to poor diet. However, we suspect that most millennials will not equate their own situation to poor global nutrition. In fact, we suspect that most younger consumers do not relate what they eat to their future health.

The two a week message for fish consumption has been promoted for many years but has little impact on helping increase fish consumption. Consumers need to be convinced that fish is something they should include in their diet simply because it is good to eat.

It is likely that in ten years’ time, we will find that fish consumption amongst millennials will be even less than 50% of the amount of fish their grandparents ate. 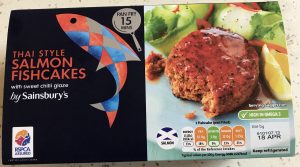 We certainly thought that the patties looked more like a burger than what we see described as a fishcake in most British stores. Fishcakes are usually covered in a breadcrumb or similar and these are not. However, Thai fishcakes are typically not coated. 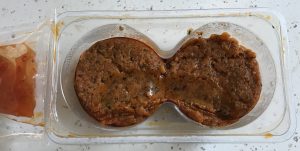 We thought that this new product was worth tasting. The appearance is simply minced salmon mixed with seasonings. They are quite difficult to remove from the packaging but once out, they are simply fried and when near ready, the separate sauce is added for a couple of minutes. 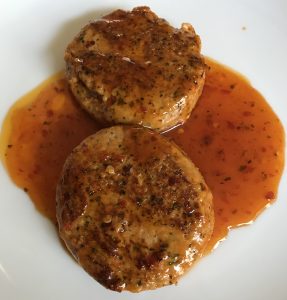 The fishcakes were pleasant to eat with a kick of chilli and a slight sweetness from the sauce. It wasn’t overly fishy in taste, which might suit some of those millennials that don’t eat fish and if blindfolded and we didn’t know what we were eating, we are not sure if we could have identified this as being made from 74% salmon.