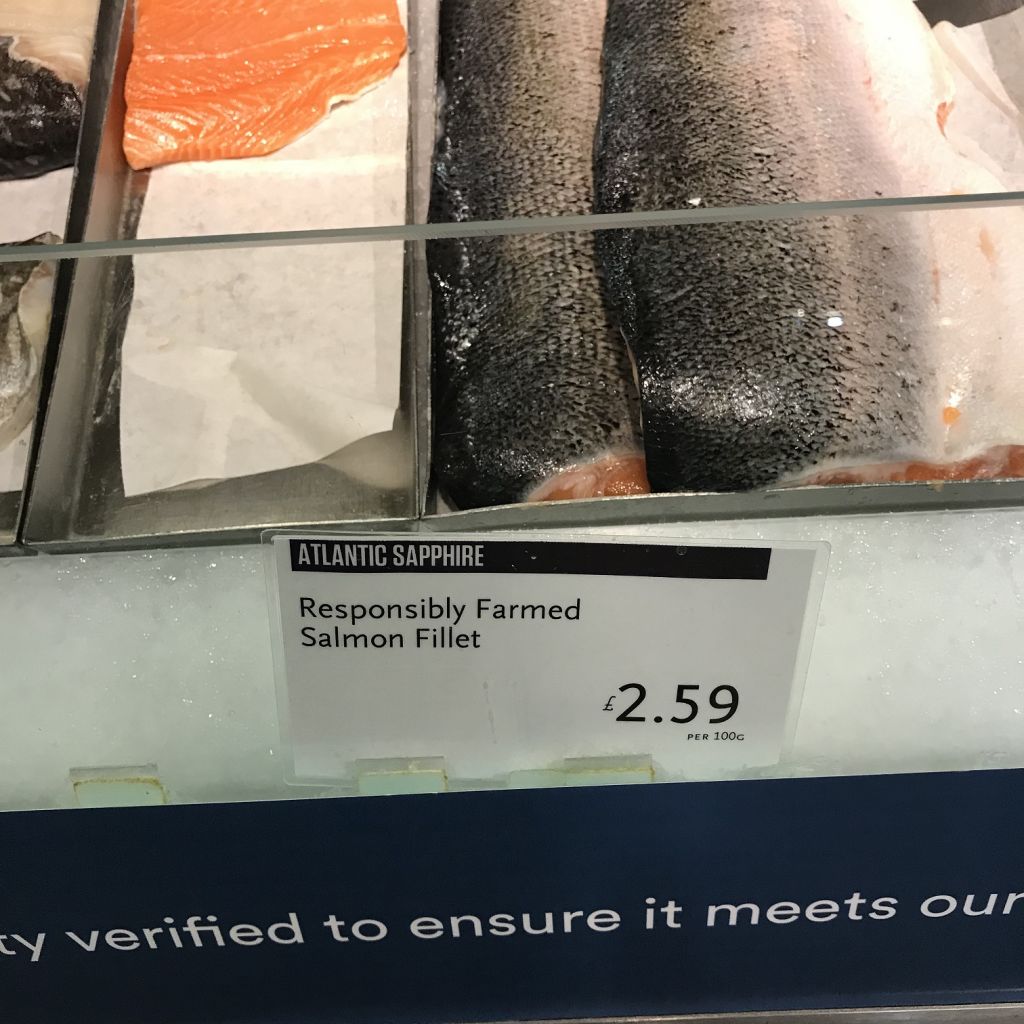 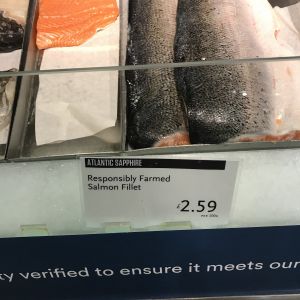 Make up your mind!:The Daily Mail reports that Atlantic Sapphire’s salmon have gone on sale in the UK. Norwegian company Atlantic Sapphire have signed a deal with Whole Foods Markets to supply its UK stores with salmon from its land-based farm in Denmark. The fish are displayed in Whole Foods with a label stating, ‘Responsibly Farmed Salmon Fillet’.

Atlantic Sapphire insist that its system of growing fish is better for the environment and the fish. They say fish are given ideal conditions to thrive and they will never come into contact with sea lice or be exposed to wild fish diseases. Any waste will be used as fertiliser and biogas.

Given the repeated demands by the wild fish lobby that salmon farming should be moved to land based tanks such as those operated by Atlantic Sapphire, we would have expected that this news would have been highlighted over and over again. Yet, rather strangely, there seems to be silence, even from the most devoted followers of Twitter.

Even the Daily Mail, which has published many anti-salmon stories, did not speak to the wild fish sector. Instead it contacted campaigners from the NGO, Compassion in World Farming. Their response was not unexpected. They told the Daily Mail that this is just factory farming and that the intensive production will require that the fish are crowded together and will cause them much stress. Phil Brooke from CFW said that he would be surprised if they met high welfare standards.

Mr Brooke raises the main issue about land-based farming that we, at Callander McDowell, have discussed many times previously and that is that those who advocate land-based salmon farming choose to be extremely selective about the benefits. The loudest voices usually come from the wild fish sector. Salmon & Trout Conservation Scotland, for example, say salmon farming must be moved to closed containment to protect wild fish. They blame the declines in wild fish numbers on the presence of net pen farms which they claim spread sea lice and disease that kills wild salmon. The solution is to move the fish into tanks, and this will allow wild fish numbers to recover (giving them more fish to catch and kill for sport). The trouble is that the removal of salmon farms will not result in a recovery of wild fish simply because we believe the declines have little to do with salmon farming. More importantly, their claims of net pens being factory farms where fish are crammed in so facilitating parasites and diseases is nothing to the potential welfare issues that will arise if tanks systems ever do become the norm.

We are sure that anyone visiting the Atlantic Sapphire farm will find fish stocked at relatively low density. The company can afford to do this because they are at the forefront of this development. If more farms become established, competition will increase forcing more intensive production to remain economically viable. This is what happened in Scotland during the 1980s with net pen farming. Prices were initially high but by 1989, as more people started to farm salmon, prices dropped making companies strive for improved competitiveness. The same will happen with land-based farming but being able to compete will be increasingly difficult and we imagine that production will need to be increased which will mean increased stocking densities and hence lower welfare standards.

Taste test: We bought some Atlantic Sapphire salmon this week to taste. Although the label on the fish counter states Atlantic Sapphire Responsibly Farmed Salmon, there is no mention that the fish comes from a land-based closed containment facility. This is the only farmed salmon on the counter so shoppers have no idea that it is different to the salmon they might have bought last month. The label doesn’t even mention where the fish is farmed. 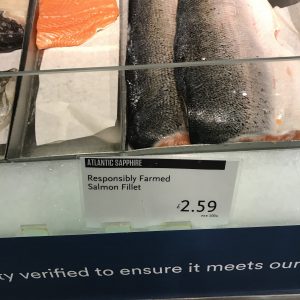 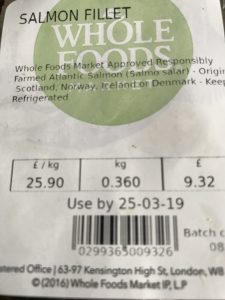 And the taste? It tastes of salmon and why not. These are fish grown in sea water and therefore shouldn’t be different to fish grown in open water sea water. It is only salmon that are grown in freshwater that are reported to sometimes have associated off-tastes. 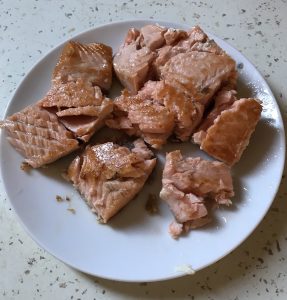 Golf and fish: According to the Northern Times, an inquiry is underway in Sutherland regarding plans to develop a new Couls golf links. There have been many objections because 32 acres of the golf course will be built on dunes which are claimed to be of national importance.

It could also be argued that Scotland has over 550 golf courses which have already impacted on the Scottish environment. It doesn’t really matter whether it is in the Highlands or the Borders, one golf course looks very much like any other and will have changed the local landscape.

Seven of these golf courses can be found on the Isle of Arran, an island of just 432km2. That is a lot of golf course for such a small area. By comparison, if all the salmon farms in Scotland were put together in the same place, they would cover an area taken up by just two golf courses. Even though the islanders of Arran appear happy to have had their landscape ravaged by seven golf courses, some are campaigning against plans to site a new salmon farm near the island.

The objections consist of the now standard format including fish waste. Another campaigner continues to claim that farms are dumping waste into the sea as if it is the same as human effluent, which it’s not. The reality is that fish defecate in the sea. In fact, an estimated 3.5 trillion fish defecate in the world’s oceans. It is a natural process. Fish waste does accumulate under the cages, but the sea bed does recover.

Lobbing into the mix: CBC News in Canada reports that an eight-year study of lobsters living below a salmon farm off New Brunswick’s Grand Manan Island found that the presence of the salmon farm had no impact on the lobster’s abundance or growth. The study has been published in the Canadian Journal of Fisheries and Aquatic Sciences.

The survey began before the farm was even established and then covered two production cycles including periods when the fish were treated for sea lice using anti-sea lice products. The study also covered a fallow period and farm expansion from 10,000 to 336,000 fish. An identical survey was conducted about one kilometre from the farm.

The survey was a requirement of the federal government as part of the farm application., The study was funded by the Atlantic Canada Fish Farmers Association and was carried out by SIMCorp, a New Brunswick based marine environmental consulting firm. SimCorp told CBC News that they are fairly sure that aquaculture can co-exist with fisheries and other species. They said that the salmon farm was typical of the area, but they suggest that similar studies should be implemented to test other sites.

This study is good news for salmon farming as it confirms the view that salmon farming can co-exist with other species however, the reason we have included this news in reLAKSation is because the first comment on the CBC website begins – ‘I question the credibility of studies like this. Who paid to have the study done?’

This is a typical comment in response to any study offering positive news about aquaculture. There is this view that because an industry has funded a project, the results have little validity. It is comment that we hear about our own investigations into the relationship between farmed salmon and wild fish. We are often told that as we are funded by the industry, which we are not – the results are fixed, which they are not.

By comparison, the numerous studies funded by those supporting the wild fish sector are deemed to be definitive even though they follow a known agenda.

The Canadian study has been peer-reviewed and has been published in a recognised scientific journal. There is no reason to disbelieve the findings.

Ve-again: The Guardian newspaper reports on a furore that has developed about a vegan influencer who was seen eating fish. They say that no-one was supposed to see Yovana Mendoza eating fish. The 28-year-old known as Rawvana has a following of over 3 million across You Tube and Instagram because she extolls the life changing properties of a raw vegan diet. She has also built a lucrative brand around veganism.

A couple of weeks ago another vlogger filmed Yovana eating fish and posted the video on line. She realised she was being filmed and tried to hide the fish, but the game was up. She later said that this was one of the worst days of her life after enduring a vicious backlash from the vegan community. She says that she felt like someone had died and as the Guardian point out – someone did die. The fish, and this is why the vegans were angry.

The Guardian reports that the fish died for a noble cause. As the criticism increased, Yovana posted a 33-minute video explaining that she had stopped being a vegan for health reasons. She said her periods had become irregular and said she had digestive problems, so she widened her diet to see if it helped. The Guardian say in a perfect world none of this would be of any interest to anyone but to Yovana but the video has been watched over 850,000 times and the story, dubbed Fishgate, has been splashed around the world from the Washington Post to the South China Morning Post.

The Guardian highlights that the internet has become a new unhealthy age of food fundamentalism based on unqualified online influencers. However, what it also shows is that pandering to food fads can be counterproductive. We have already argued that the recent Seagan campaign misses the point. Vegans do not eat anything from animal sources. To try to convince them otherwise is a fruitless exercise.

Changing consumer behaviour to include fish in their diet will prove just as great a challenge as trying to get vegans to eat fish. The fish and seafood sector have yet to rise to this challenge.