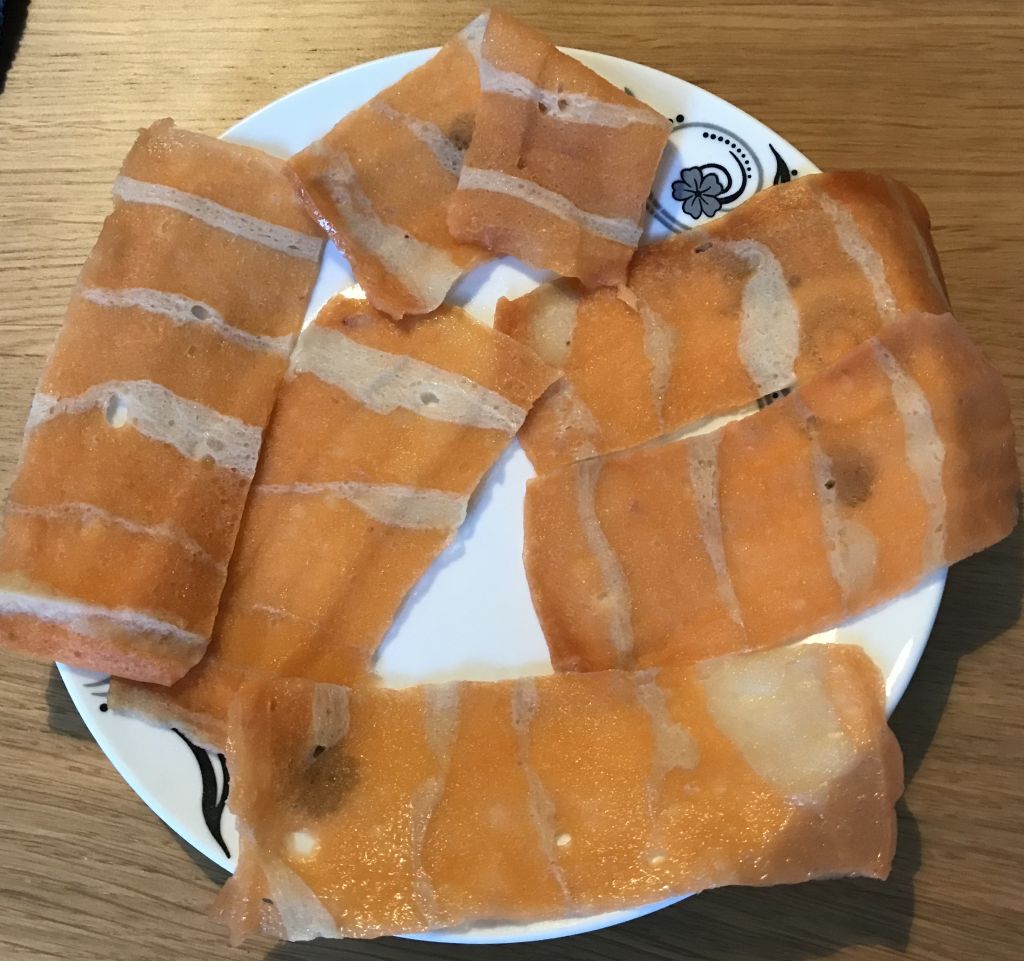 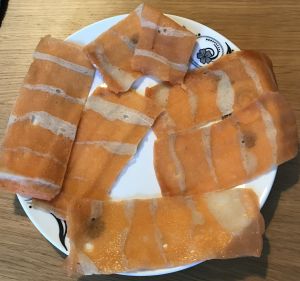 Wise words: Given the amount of recent coverage of closed containment, we thought that it is worth repeating tweets from West Creek Aquaculture in British Columbia. West Creek have grown coho and sockeye salmon as well as rainbow trout in closed containment for many years. They ran a number of consecutive tweets this week:

“We see all these announcements for land- based aquaculture growing 10,000, 30,000 and 90,000 MT of salmon. No-one in the world has successfully grown 1,000 MT of land-based salmon. Let’s get past that milestone before we get too crazy with the predictions.”

“These mega projects are great for investment, shareholders, activists and construction jobs but their failure could destroy the overall industry and perception for land-based salmon.”

“Just because you can grow 100 chickens is no indication you can grow 100,000 chickens. Salmon are now grown in the ocean. This is land-based farming. Sustainability should not be measured in investment capital and share price. Farming doesn’t work that way.”

“While we support the efforts and interests of other land-based growers, it bothers us that bigger, better, faster is being applied to land-based farming. Nature tends not to agree with this strategy. She always has surprises. You can’t force her.”

“We want to see aquaculture, land and sea feed our 10 billion future, sustainably with minimal impact. We want to see a land-based salmon farm grow 1,000 MT profitably year over year. Then we should talk about 5,000MT. This is our approach.”

We, at Callander McDowell have nothing more to add.

The one high point of the debate was the speech by Tavish Scott MSP who should be congratulated for a passionate defence of jobs, business and the future of the community he represents.

One of the demands of some MSPs as well as critics is for real time reporting of sea lice, mortalities etc. We listened to these demands at the same time as we wait for publication of salmon and sea trout catch data from January to December 2018. It may yet be some time before this is published. How is it that the salmon farming industry are expected to publish real time data whilst we wait for data to be published that is already over a year old. Even when it’s published it is total figures for a fishery district rather than for each specific beat or fishery. It is almost impossible to obtain such information. When we submitted an FOI for just one fishery, the fishery proprietor was informed as to the identity of the person requesting the data.

After we had compiled some of the catch data into time series, we met the Chief Executive of one of the angling NGO’s to be told that this data was meaningless because the raw data is so inaccurate. The data is collected by proprietors and angling clubs so if they are not providing accurate data then action against them should be considered. Why can they get away with supplying inaccurate data that they have a year to compile yet the salmon industry is criticised for supplying accurate data with a very short time lag.

It seems that what is good for the salmon farming industry is not applied to the wild fish sector.

We have just had sight of an email that was circulated about fishing effort. One of the criticisms of the catch data is that it doesn’t identify whether low catches (as happened along the west coast during the 1990’s) is due to a lack of fish or the fact that no one is fishing for them. Fishing effort has been collected in England and Wales for some years, but Marine Scotland seems to have dragged its feet over collecting the data. They have now started to do so.

The email informs proprietors that they are required by law to return details of fish effort. Apparently even the shortest visit is recorded as a day, something that has been highlighted to Marine Scotland as likely to create a false impression as to how many anglers are fishing on any day. Apparently Marine Scotland are unwilling to listen. It seems that the angling sector aren’t keen to have to record this extra data, especially if anglers don’t fish all day.

Perhaps, we should consider whether sea lice are visiting salmon just for the day too!!!

Interpretation: We recently discussed the fact that a newly published scientific paper claimed that sea lice infestation was higher on sea trout sampled from sites close to salmon farms. The paper was widely cited by the anti-salmon farming lobby as yet further proof that salmon farming is detrimental to wild fish stocks. Yet, when we looked at the raw data included in the paper, it did not support their claims at all. It was only after numerous statistical analyses, that the claimed relationship was established.

One of our readers has forwarded us a copy of another paper that makes similar claims, but the data is also suspect. The paper is by Shepherd, MacIntryre and Gargan and was published in Aquaculture Environment Interactions in 2016.

The researchers obtained data from 7,714 fish sampled from 17 locations in Ireland from 1991 to 2015 and 16,768 fish from 8 locations in Scotland from 1997 to 2015. They describe how a small number of sea trout – 212 fish – caught from the east coast were excluded from the study because they caused heterogeneity in their models. Yet, strangely, the final number that the researchers used were 6,515 from Ireland and only 13,991 from Scotland. No mention was made as to why 2,777 fish were excluded from the Scottish data and a total of 1,199 from the Irish data. We can only wonder that perhaps the fish that don’t fit into the perceived model were simply put to one side.

Lice infestation and body condition are considered separately in the results section of the paper. With regard to lice infestation, the researchers say that for the Irish data, lice infestation was significantly greater for sea trout caught closer to a salmon farm, but the effect was not significant for Scottish fish. This means that for the much larger number of fish the distance from the farm made little difference to the level of infestation.

Sea trout caught nearer Irish salmon farms were found to have a significantly reduced weight for their length i.e. body condition. However, the effect for Scottish fish was found to be negative. This means that the effect could not be isolated.

So, when the authors report in the paper’s abstract, that they found that sea trout captured closer to salmon farms had significantly higher levels of lice infestation as well as a significantly impaired body condition, they mean that this applies only to only 46% of the sample. These observations don’t seem to apply to the majority of the fish sampled.

The question is whether this paper shows that salmon farming has an impact on wild fish stocks. We don’t believe it does.

Poisson passion: The Grimsby Telegraph report that “Saucy gets saucier for Valentine’s Day as love potion created for your ‘poisson passion’.”. Saucy Fish Company’s ‘Saucy No 5’ is made from four potent aphrodisiacs. 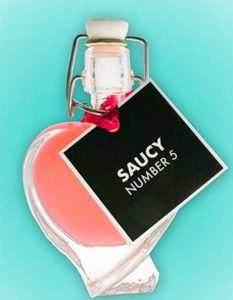 The limited-edition sauce is made from pomegranates, vanilla, chilli and champagne and playfully promises to get pulses racing. It is a free gift with any on-line order. The company says that it is an ideal accompaniment to salmon or other fish.

We think this is a lovely idea for this romantic time of the year. Whilst it is unlikely to bring about a reverse in the downward trend of fish consumption, it shows that thinking out of the box can made fish a more exciting meal choice, especially for the younger consumer.

Vegan smoked salmon:  We recently taste tested some fishless fish dishes that have began to appear in British supermarkets. We had also heard that Sainsbury’s were to launch Sophie’s Kitchen vegan smoked salmon and so we have been keeping watch for its arrival in our local store.

This week we encountered a tasting in a Sainsbury’s store in London where Sophie’s Kitchen vegan prawns, another product we hadn’t seen, were being cooked for customers. We learned that in fact both the prawns and smoked salmon alternatives were in fact stocked in the freezer section.

Sophie’s Kitchen has a mission, which is described on the pack. Their first-born child suffered a severe reaction to seafood when she was a toddler, so she decided to create a delicious, satisfying seafood alternative. 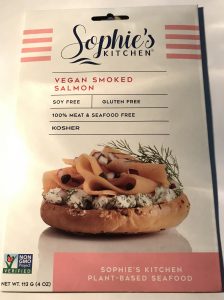 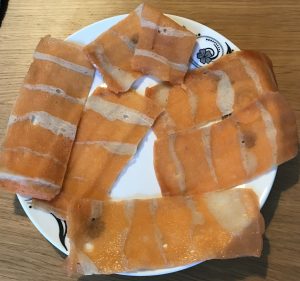 It seems that it is the konjac powder that imparts a fishy flavour and after handling the slices, a fishy smell persists on the fingers.  There is also a fishy taste to the ‘smoked salmon’ when it is eaten but the texture is like a chewy plastic. All our ‘smoked salmon’ tasters spat it out. It was nothing like smoked salmon and it was unpleasant. It is also expensive at £4.50 for 113g. The odd weight was because this is a US product manufactured in Taiwan.

By comparison, V-Bites Making Waves smoked salmon style slices was only £1.99 for 100g mail order. This comes from a company who claim to be pioneers of plant-based foods. They have a range of other faux fish products besides their smoked salmon. Their smoked salmon style slices were certainly more edible than the Sophie’s Kitchen product and it even had a slightly smoky taste. However, our tasters were slightly more convinced by this product until they compared it with a slice of real smoked salmon. It might have been more pleasant then the US product but when compared against the real thing, it lost any appeal it initially had. 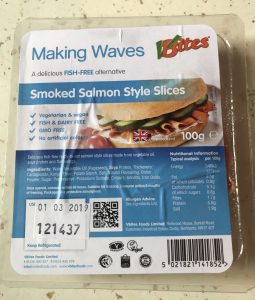 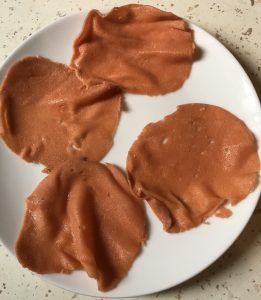 Vegans might be used to eating this sort of artificial plant-based food but anyone wanting to eat smoked salmon will not be fooled by these vegan alternatives. Anyone but a vegan is likely to prefer real smoked salmon.