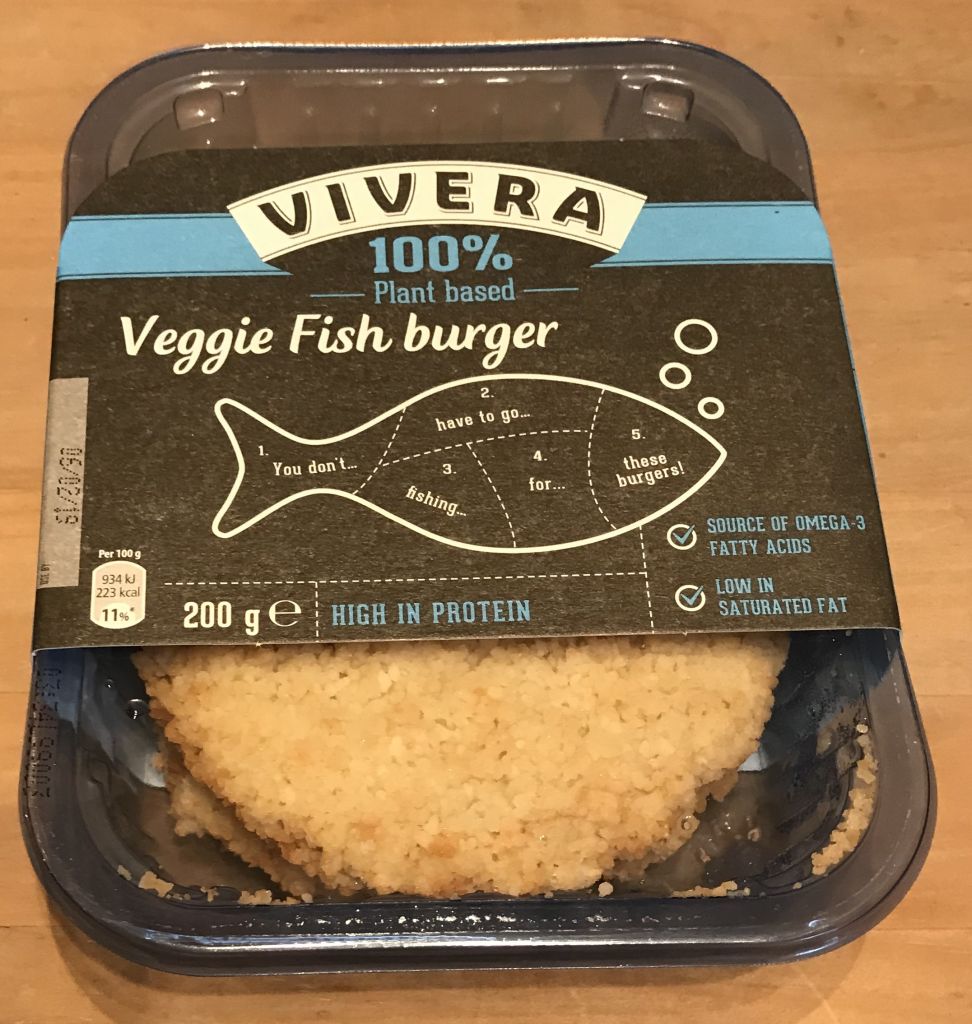 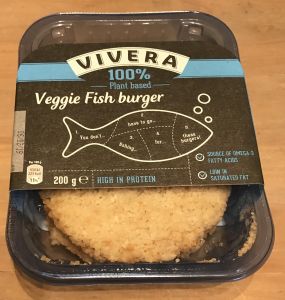 Think Seagan: Seafish have just published their January newsletter – ‘The Catch’ and one of the prominent stories concerns the ‘Think Seagam Campaign’. This is described as a New Year health focused campaign which will be launched on January 28th and which will promote seafood with a vegan diet.

SeafIsh say that the vegan movement has gathered momentum over the past year and there are now more vegan restaurants in the UK than in any other country. Against a continuous decline in seafood consumption, Seafish are keen to tie seafood to the vegan trend and show consumers the benefits of incorporating seafood into the vegan diet.

We, at Callander McDowell, wonder whether someone may have had too much bubbly over the festive period to properly think this through. Maybe someone hasn’t taken the trouble to understand what veganism is about.

The Vegan Society definition of a veganism is that ‘It is a way of living which seeks to exclude, as far as possible and practicable, all forms of exploitation of, and cruelty to, animals for food, clothing or any other purpose.

There are many ways to embrace vegan living. Yet one thing all vegans in common is a plant-based diet avoiding all animal foods such as meat (including fish, shellfish and insects), dairy, eggs and honey, as well as products like leather and any tested on animals.’

Why would anyone following a vegan diet be persuaded to forgo their principles to eat fish and seafood? Even someone following a less strict vegetarian diet will not eat fish.

The Vegetarian Society defines a vegetarian as ‘someone who lives on a diet of grains, pulses, legumes, nuts, seeds, vegetables, fruits, fungi, algae and/or eggs or some other non-animal-based foods (e.g. salt) with, or without dairy products, honey and/or eggs. A vegetarian does not eat foods that consist of or have been produced with the aid of products consisting of, or created from, any part of the body of a living or dead animal. This includes meat, poultry, fish, shellfish, insects, by products of slaughter or any food made with processing aids created from these.’

Maybe Seafish have confused the latest food trends. One that doesn’t seem to get much coverage in the media is a Flexitarian diet. According to BBC Food a flexitarian or a ‘casual vegetarian’ is someone who follows a plant-based diet that reduces the carbon footprint and improves health with an eating regime that is mostly vegetarian yet allows for the occasional meat or fish dish. This approach is the result of people taking a more environmentally sustainable approach to what they eat by reducing their meat consumption in exchange for alternative protein sources.

The problem for Seafish is that consumers who are following the increasing trend towards a plant-based diet are not looking for fish and therefore never hear the fish related messages such as ‘Two a Week.’ If they don’t hear the message, then they will never even consider the option.

Save the planet: The Guardian newspaper reports that a commission of 37 experts from 16 countries have proposed a new dietary regime that will avert climate change and save the planet. Writing in the Lancet, the scientists have said the food we eat and how we produce it determines the health of people and the planet and currently we are getting it wrong. They say that global adoption of the new regime would prevent 11 million early deaths a year and that the reduction in meat consumption would stave off catastrophic damage to the planet. They conclude that the global food system needed urgent transformation to reduce greenhouse gas emissions and water while feeding a population of 10 million.

The diet assumes an intake of 2,500 calories per day which they say is not a deprivation diet but is somewhat realistic of what can be achieved.

The experts say that people should start to think of meat as a treat and have a burger once a week or a steak once a month. Their recommendation for fish is the equivalent of half a fish finger a day. This equates to just under one and a half portions of fish a week.

Clearly, this is at odds with traditional advice for fish consumption. The NHS in the UK say that the public should be eating at least two portions of fish a week, one of which is an oily fish. We are currently failing to achieve this recommendation now, so this new advice will make it even harder to persuade the public to do so.

The reality is that it is the younger consumer who is more influenced by messages to save the planet and as the trends show, there is an increasing move to plant-based meals. By coincidence, it is this younger group of consumers who are rarely eating fish, if at all. The likelihood is that as older fish-eating consumers pass on, they will not be replaced by those growing older.

Fishless & Chips: The Guardian newspaper reports that Quorn, manufacturers of protein derived from a fungus have announced that they are to launch battered and breaded fishless fillets. This means that fish and chips are going vegan.

Quorn say that these fillets will give consumers a new alternative to fish. They say many of the world’s fish stocks are over-exploited and independent research show that mycoprotein has a lower carbon footprint than farmed fish. The company hopes to capitalise on the rapidly growing number of people eating less meat, fish and dairy products. About a third of Britons have stopped or reduced their consumption of meat.

Quorn say that their new fishless fish will replicate the texture and flakiness of real fish. The new product will join a wide range of ‘faux fish’ products that are now on sale in supermarkets. We, at Callander McDowell, felt this was too good an opportunity to miss and therefore we have taste tested three new and different fish alternatives.

Vivera Veggie Fish burger, which is made in Holland and is now readily available. 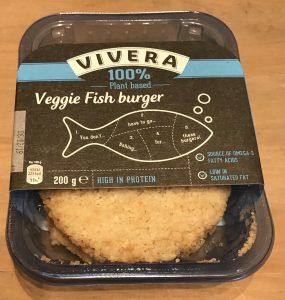 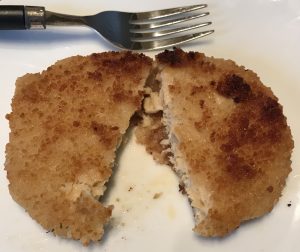 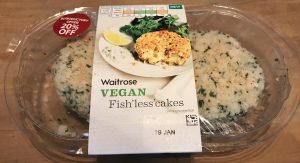 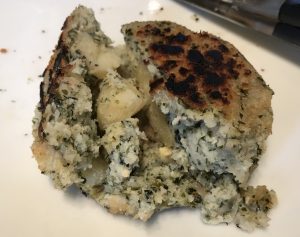 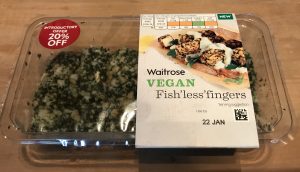 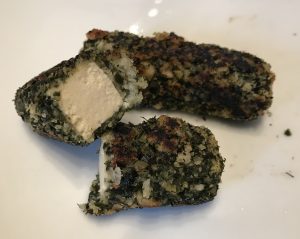 This was a difficult taste test to undertake because the products didn’t really taste of the missing ingredient. In reverse order, the least appealing were the vegan fishcakes made from potato. The cake was formed from pieces of potato held together by a mix of butter beans and tofu with seaweed and capers. The overall taste was of the seaweed and capers which gave the cakes a salty piquant taste which was not to our liking.

The Vegan fishless fingers consisted of a tofu baton covered with seaweed and breadcrumb. When cut open, it was mainly plain tofu on show. It was not as unpleasant as the cakes, but the seaweed flavour was mainly one of salt.

The best of these products in our opinion was the Veggie fish burger. It was difficult to describe the taste except that it tasted of something which was unidentifiable. It wasn’t unpleasant and was slightly moreish despite being nothing like a fish burger.

However, we know why the product was the winner in our taste test. We are reminded of a comment by radio DJ and foodie Chris Evans who once said that it doesn’t really matter what fish is in fish and chips. It is the batter that can make fish and chips into a star dish. In the case of this burger, the filling was very thin and was covered with a coating that effectively masked the flavour.

Our overall view is that we would prefer to stick to the fish.

We would mention that these products do have one thing in common with fish and that is that after cooking them, the smell from the kitchen lasted and lasted.

Copper coloured: The salmon farm critics continue to use any excuse to try to undermine the salmon farming industry. One of them retweeted a tweet from the marketing people at Alaska’s Copper River. Their tweet included a photo of deep red salmon steaks and stated:

This colour doesn’t come from additives or dyes – its the natural color of wild Copper River salmon. This deep red hue is a result of wild salmon’s diet in the ocean environment which includes zooplankton and other small crustaceans. 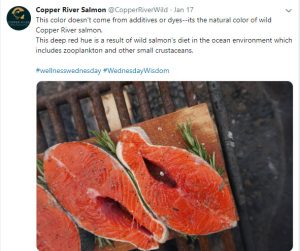 The reality is that wild Atlantic salmon also feed on zooplankton and other small crustaceans but never develop such a deep red colour. This is because the flesh colour ultimately will depend on what the fish eats and the genetic makeup of the fish depending on the species.

Copper River Salmon appear to suggest that this is the colour of all Copper River fish which is completely untrue. Their statement is actually very misleading, and the tone implies that this is simply a choice between these deep red wild salmon and less coloured farmed salmon.

The truth is that there are five different species of wild Pacific salmon and the differences between them are usually highlighted by their external appearance. However, the flesh is also very different. Some of the Pacific species have very pink coloured flesh. From left: Chinook, Sockeye, Coho, Keta and Pink 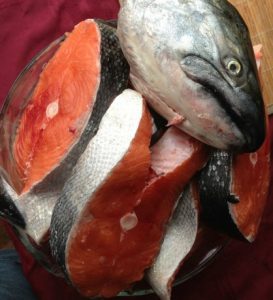 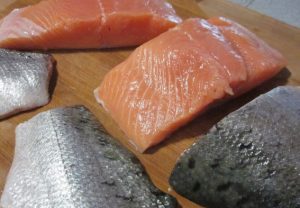 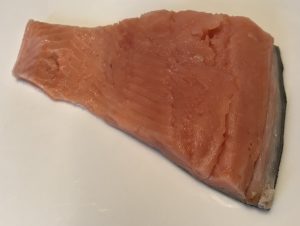 The Pacific salmon story gets more interesting when it is known that the Chinook or King salmon, which is considered the best of the Pacific salmon species can have very different flesh coloration form red to white and even marbled. The white or ivory flesh is now some of the most sought after and brings a premium price. The variation is thought to be genetic and depends on how effective the fish is in converting carotenoids found in salmon foods into flesh.

It would appear that wild Pacific salmon is not all that some would have us believe.