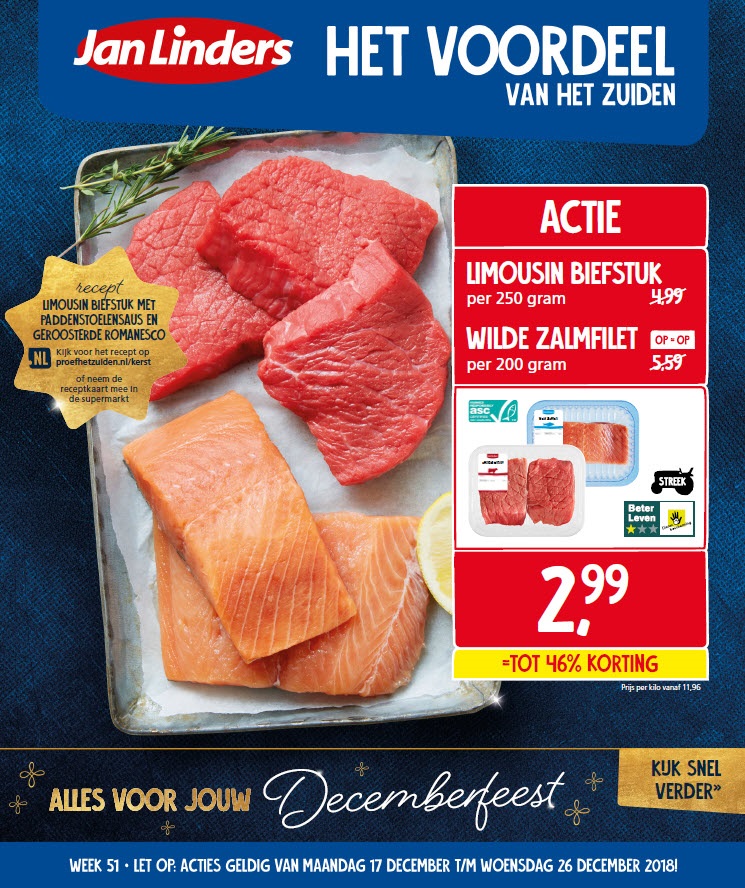 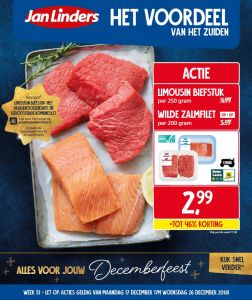 Christmas 2018: As reported every year, the best Christmas deals for salmon have been: 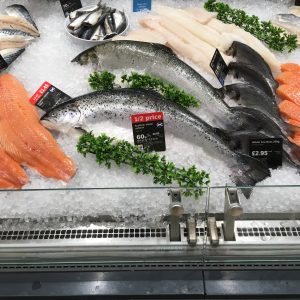 This year, the anti-salmon farming lobby have been tweeting that the industry has had to sell fish cheaply to attract consumers because in their view the salmon is c**p. However, as we have already pointed out, the low prices are set by the retailers who see the salmon as a loss leader. Asda also cut the price of their beef joints to £4.97/kg in the same way. We have yet to hear any complaints that the beef is also c**p.

Yet, this year, it is vegetables that have really seen the greatest discounts. This is because of competition particularly from Aldi who have been selling six varieties of vegetables as low as 18p per bag. Asda have been selling 1kg bags of carrots for 20p, Tesco at 29p and Sainsbury’s at 30p. Other vegetables have been selling at the same price. We don’t anticipate similar claims of c**p for these items.

This year, the antis have also been running a campaign asking consumers to take a pledge not to eat farmed salmon this year. We can report that most consumers have completely ignored their calls and have been happy to buy salmon. Stores have been well stocked with the fish and salmon has been a good seller as the following image from one store shows.

Fish consumption has been in decline for several years, but salmon has continually bucked this trend. Without the availability of salmon, most fish counters would have been removed years ago. Salmon is the Christmas star.

A year of change:  Last October, Seafood Week 2018 attracted 416 million interactions through media. This was the overall finding featured on a new video that was released on 27th November on YouTube by Seafish. We certainly look forward to hearing how many of these interactions translated into purchases of fish. The fish and seafood sector need to do all it can to help reverse the decline in fish consumption.

Across the water:  The Times newspaper reports that Irish consumers are eating the least fish of any other EU country despite the fact that it is surrounded by some of the best fishing waters. The paper reports that the decline is not just in the consumption of fish at home but also when they dine out.

Two thirds of respondents in a new survey say that taste, smell and appearance of fish were the main reasons why they don’t eat fish. 80% said that they would buy more if it weren’t so expensive, so cost is just as important as appearance to Irish consumers.

Despite the fact that consumption has declined in Ireland, Bord Iascaigh Mhara remains positive saying that domestic consumption actually increased last year. However, they refer to sales value which has increased by 4%. This is likely to be due to rising food prices including the price of fish. In the first half of 2018, sales value continued to increase by a further 1.6%

The most popular species are salmon, cod and prawns with salmon showing especially strong growth.

The state of fish consumption in Ireland is very similar to that in the UK. This is not surprising since there are similar trends across all of Europe, albethey on differing scales. Younger consumers are falling out of love with fish. This is likely to become even more noticeable as today’s older regular fish consumers pass on.

The main increase this year is due to increased consumption of shrimp and salmon as well as some lesser known species. According to the National Fisheries Institute, the top ten most consumed species have decreased to 84% whereas the top ten usually account for 90% of fish and seafood consumed. Although NFI do not provide examples of these lesser consumed species, we wouldn’t be surprised if they are species that are familiar to some of the ethnic groups.

In our experience, US consumption is much more difficult to track than in some European countries simply because of the size of the country and because it has such a diversified population with different food preferences. Whilst any increase in consumption is welcome, the challenge to increase this beyond the usual range will be a greater challenge than in other countries.

One statistic which is not published but would be of interest is the split between the consumption of wild and farmed salmon, rather than just salmon. We suspect that this can be calculated from the import and export data since a significant amount of wild caught salmon is exported whilst farmed salmon is imported from most of the farming countries.

Consumer beliefs:    Fish Farming Expert report on a new survey of European consumers commissioned by the Aquaculture Stewardship Council that found many shoppers in France, Germany and the Netherlands agreed that it is important that supermarkets provide responsibly sourced farmed seafood.  This is not surprising since most consumers would not disagree with questions relating to issues of sustainability. We suspect that if these shoppers had been asked to list what is important to them when they buy fish sustainability would be low down the list. It is only because this survey was commissioned by the ASC, that sustainability has achieved such prominence.

The ASC have broken down their findings for each of the three countries surveyed. The first measure they report is the importance of a logo on the packaging of farmed fish to help make a choice. In France, 56% of consumers think a logo is important, whilst the figure is 57% for Germany. The results given for the Netherlands are presented in a different way so a direct comparison with France and Germany on this issue is impossible. The nearest finding is the 35% of Dutch shoppers say that the presence of the ASC makes their choice easier when buying fish.

It is difficult to explain why Dutch shoppers hold a lower interest in sustainability than their French and German counterparts except that their view may be distorted by the way the survey is presented. We suspect that in the real world, perceptions can be very different. In the run up to Christmas, we came across the following example of Dutch retailer promotion. Clearly, even in those that use sustainability labelling, there is a lack of understanding of what the ASC logo means. 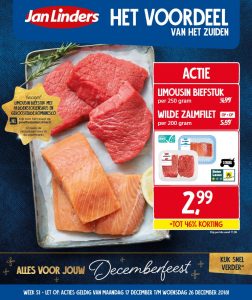 Christmas taste: This Christmas, UK consumers have been able to choose a wide range of salmon products including flavoured sides of fresh salmon, dressed poached salmon, a variety of smoked salmon and canapes, terrines and starters. However, the one product that caught our attention this year was sold by the Coop and consisted of two salmon fillets with a cranberry and orange crust with a cranberry and orange sauce. The 260g pack retailed at £5. 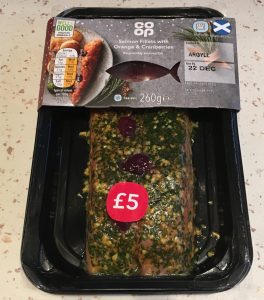 We were impressed with this pack simply because of its small size. Most of the Christmas salmon specials are sold in sizes of 750g and above and intended as a centrepiece for the Christmas meal. The Coop product allows a couple on their own to enjoy a taste of Christmas without huge expense.

We tasted this product and were quite impressed. The added flavours are not overpowering and still allow the taste of salmon to come through. This was a definite winner this Christmas at a price little different from plain salmon. 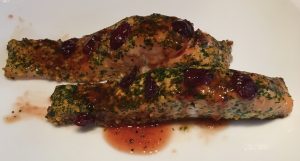