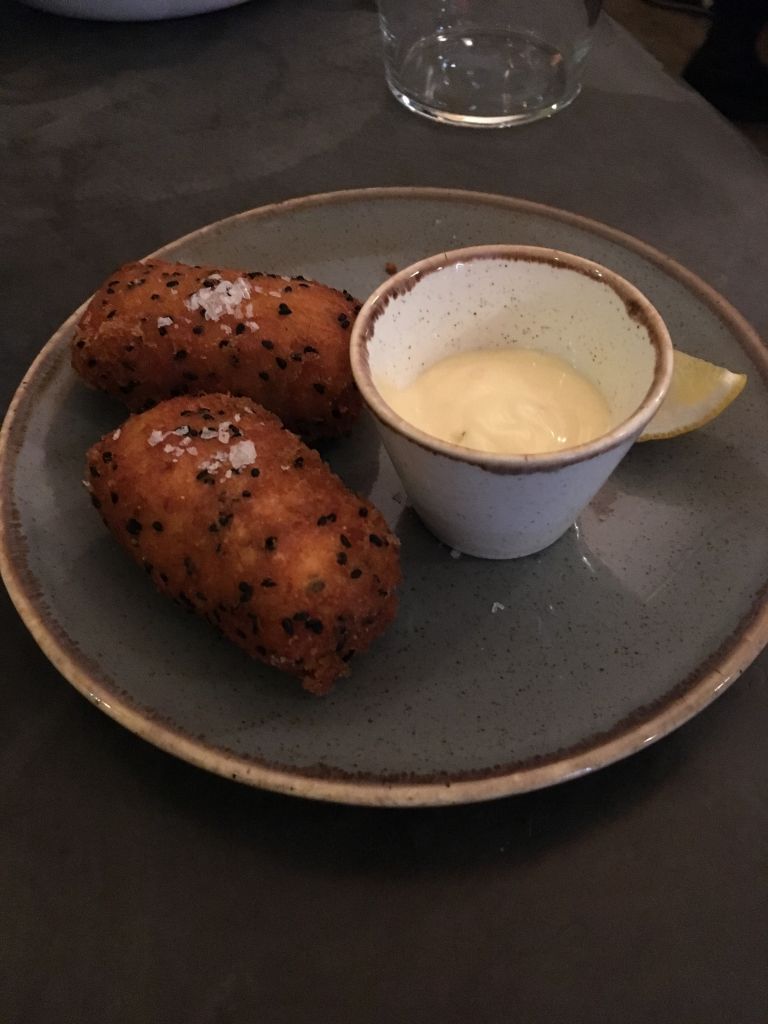 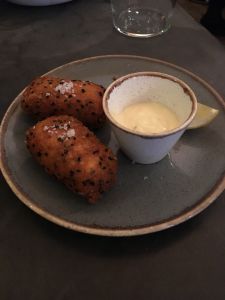 Getting older: According to Undercurrent News, Seafish commissioned YouGov to conduct a ‘State of the Nation’ survey of 2,000 members of the public concerning their fish consumption habits. The survey covered several different areas but the one that attracted out attention was the breakdown by age of the public who eat fish. This reminded us of a similar study carried out about twenty years ago and it’s interesting to compare the two.

At the time of the first survey, industry analysts concluded that the 45-year-old age point was fundamental in the explanation of why there was such a difference between the amount of fish younger and older consumers ate. They suggested that younger consumers had growing families and thus didn’t have either the money or time to spend on fish. By comparison, once consumers reached the age of 45 and above, families were older and had left home meaning older consumers had more money to spend on fish and more time to prepare and cook it.

We, at Callander McDowell, were somewhat sceptical of this explanation. We argued that older consumers grew up at a time when shopping involved visiting the butcher, the baker, the greengrocer and the fishmonger. They were familiar with buying the raw ingredients and making proper meals and generally continued to do so as they got older.

The younger age groups grew up at the time of the supermarket with much more convenience-oriented shopping. Ready-meals and microwave cooking meant a completely different way of preparing meals and this rarely included fish. This is because of all the usual reasons why people don’t eat fish, bones, smell etc. With the progression of time, if parents don’t eat fish, neither will their children as they grow older.

However, the thinking at the time was that as younger consumers age, they will start to include fish in their shopping list We are not so sure. If you have spent twenty years not going to the fish counter, why, just because you reach your late forties, would you start to do so? One reason put forward is that as you age you start to look for a healthier diet and whilst logic suggests that this should include fish, unfamiliarity would suggest not. After all, there are plenty of ways of healthy eating that do not include fish.

What is clear is that even old fish consumers are getting older. When they have passed on, who will be left eating fish?

Stating the obvious: The blog in the latest issue of ‘The Catch’, Seafish’s on line magazine/newsletter states that their marketing work has reached new heights with the bigger and better new look Seafood Week 2018, reaching the parts that previous campaigns have failed to reach. Despite our doubts, we certainly hope so.

The blog also referred to their UK Seafood Summit, which recently took place at Scunthorpe. One of the presentations detailed the results of the State of the Nation study, the top line statistics included the fact that from 2015 to 2017, fish and seafood consumption fell 5.4% from 161.07g per person per week to 150.54g. This fall in consumption coincided with the relaunch of the Seafood Week promotion. We are not suggesting that the two are linked but it might be expected that promoting the consumption of fish and seafood would bring about an increase in consumption. We observed this year’s new Seafood Week and are not convinced that as a consequence of the promotion, there will be a reversal of this downward trend. It gives us no pleasure to say so.

Undercurrent News reported from the Summit that 70% of UK seafood buying public now consider sustainability when purchasing fish, a figure which we believe is overstated. We don’t know how the question was phrased but we suspect that it wasn’t ‘what issues are important to you when buying fish?’  In fact, when consumers were asked about their specific buying behaviour, only 13% said that they actively seek out and buy sustainable fish. This reflects views we have seen elsewhere, that sustainability is not really an issue for consumers. Not surprisingly 38% of those asked said that it is the responsibility of the retailer to ensure that the fish they sell is sustainable. We have always argued that if sustainability logos were removed from packs overnight, most consumers wouldn’t even notice.

Undercurrent News said that it comes as no surprise that cod remains the UKs most popular fish, however, the actual chart used in the presentation is confusing since it refers to awareness and then mentions which fish is most popular. Interestingly, tuna is broken down into fresh and tinned and if added together produce a figure of 99% as compared to cod at 83%. This would make tuna the most popular fish in the UK, which it isn’t. Given that Seafish produce information on volume fish sales in the UK, the true ranking of each species is already known. In terms of value, the Big Five fill the top five places but when considering volume, pollock fills position four. This is because it is widely used in frozen fish products. Haddock is in fifth place and prawns drop to sixth. In the awareness chart, pollock is only in nineteenth place which suggests that species might not be so important with consumers who buy frozen breaded and battered fish.

Finally, the survey asked the public how fish and seafood consumption might be increased. We presume that the question was specific in that it asked what could be done to make you eat more fish and seafood. The biggest response was that there should be more money off deals in store. This makes us wonder whether these fish buying members of the public have ever bought fish in store because the fish sector is awash with money off deals across the whole retail sector. They are a permanent feature of the fish counter, the chilled section and frozen. No mater which store is visited, there are always offers to be had.

The second most popular suggestion to increase consumption is to make fish available in ways that are easy to prepare. Again, we do wonder whether these fish buying consumers have ever shopped for fish as there have never been easier to prepare options available. In our opinion, something like sea bass fillets could not be simpler. These thin fillets (as opposed to chunkier salmon) can be pan fried in just a few minutes. Yet, many consumers wouldn’t even consider such an option just because the smell from pan frying fish can linger long after the fish has been consumed. Smell or the perception of smell is a major barrier to cooking fish.

In total, there were about fifteen different suggestions for increasing consumption including promoting fish as a healthy food, fish meal deals and meal ideas. The most interesting is the suggestion to conduct campaigns to educate how to cook fish, which certainly has merit and reflects our long-held view of targeted marketing.

The presentation ended with some bullet points about what the industry can learn from the survey. Number one is that taste is the primary driver of fish and seafood consumption, yet strangely it isn’t mentioned in the slides from the presentation. It is an issue on which we, at Callander McDowell, totally agree. We have repeatedly argued all the messages about health and sustainability are completely irrelevant if consumers don’t like the taste of the fish. Equally, the reason why consumers should be eating fish and seafood is not because it is good for their health or because the fish is sustainable but simply because it tastes good and is good to eat.

Misrepresented: A recent tweet led us to an article on sustainablefisheries-uw.org titled the irony of Oceana’s seafood fraud campaign. This is of interest because we have always commented on Oceana’s campaigns whenever they have been publicised. They always seem to suggest that there is a high level of intentional fraud within the fish and seafood supply chain that manifests itself at the consumer interface. Oceana tend to focus on sushi restaurants but have looked at retail too. Our criticism is that they make their claims but never provide even one example to demonstrate this fraud. In essence, they take a sample of the fish and have it DNA tested and then compare the DNA result with what the shop or restaurant has claimed.

The article by Jack Cheney suggests that Oceana are misrepresenting their findings, claiming that seafood fraud is rife. In fact, they target species that they know may be not quite as claimed. Jack highlights Red Snapper saying that over 200 fish species can be called snapper but if the label says red snapper, then it must be specifically one species. This level of technicality is unlikely to be appreciated by many smaller sushi restaurant owners.

Jack also points out that there is a big difference between intentional fraud and genuine mislabelling but Oceana classifies everything as intentional. The outcome of their research is that almost all the sectors they investigate have high levels of fraud, when this simply isn’t true.

We can only wonder what is worse; actual mislabelling or Oceana’s misrepresentation of the issue as a way of self-promotion. Sadly, Oceana are not the only ones guilty of this approach as those working in the salmon farming industry know only too well.

Twelfth place: In twelfth place in Seafish’s consumer awareness of fish species survey is trout. Like salmon, trout is farmed in the UK. Unlike salmon, it is not as popular even though it tastes just as good.

We had previously mentioned that we were looking for a restaurant that was promoting a Seafood Week special menu. Unfortunately, we couldn’t find anywhere so we sought solace by eating out anyway. Twice we have selected trout from the menu, once in London and once in Manchester.

In Walthamstow, we ate Sizzling trout in a neighbourhood restaurant and in Manchester we had Chalkstream trout croquettes in another neighbourhood bar and restaurant in the up and coming Ancoats district. Both were extremely tasty and good to eat. We would hope to see more trout on the menu in future. 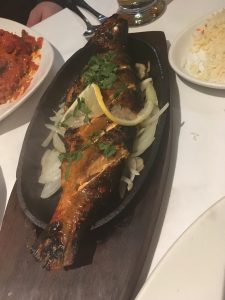 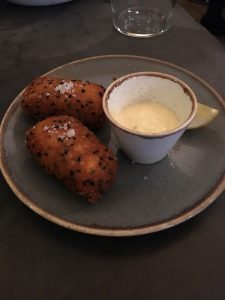