Damp squib: The long-awaited BBC Scotland Landward TV programme about saving wild salmon aired last week and was rather an anti-climax. It offered no new revelations just the same people saying the same thing yet again. Its not surprising that we have heard that viewing figures were extremely poor. We suspect that besides a few salmon anglers, the Scottish public are getting bored with the question as to whether salmon farms are killing the wild salmon that anglers want to kill.

The pre-broadcast publicity described the issue of saving salmon as somewhat inciteful by saying it’s the angler vs salmon farmer. Commenting later in an angling forum, one angler suggested that ‘salmon farming won by a knock out’. Others said that this was because the industry came across as professional whereas the angling point of view was put by amateurs ‘babbling on’ about a lack of salmon.

One of those speaking against the farming industry was Corin Smith. We can’t remember exactly what he said because we were distracted by his baseball cap. It is open to debate but in our opinion, such items of attire do not really reflect an aura of professionalism that those on the anglers’ forum expected. However, it seems that Mr Smith was not wearing his cap as a fashion statement, but to promote his fish guiding business.  If that  is his priority, we are happy to give him some extra publicity – see https://www.wildrisecompany.com/

One of the packages Mr Smith provides is to stay at the Kinloch Lodge in Sutherland with fishing in Loch Hope and the River Hope. Mr Smith describes Loch Hope as

Hope in name and Hope in nature. Scotland was once blessed with a number of world renowned “loch-style” sea trout fisheries. Icons like Loch Maree and Loch Stack, sadly now laid low by poorly managed salmon farms. However, with the sea trout of Loch Hope able to avoid the impacts of these farms it remains as a shining example of what is possible. As good as it was a hundred years ago and truly unique to Scotland

This is something of a puzzle given that the River Hope empties into Loch Erriboll where there are two salmon farms. Anyway, anyone wanting a three- night stay with fishing then Mr Smith is your man. The cost is £1,595.

With Mr Smith in mind, we would like to respond to a couple of the posts on his Facebook page. Firstly, he seems outraged that there have been comments implicating wild salmon in the spread of sea lice. Mr Smith says that this is a revelation. This may be a revelation to him, as a new entrant to salmon farm criticism, but discussion as to how wild salmon are involved in the spread of sea lice has been going on for years. It happens, but it does not mean that wild salmon and salmon farming cannot co-exist together in harmony. By coincidence, someone we know caught a large salmon from a well-known east coast river this week. It carried 16 mature sea lice. It’s a natural phenomenon.

The second issue that Mr Smith raised was that Marine Harvest’s Loch Ewe site has experienced ongoing problems with environmental monitoring for a number of years. The Loch Ewe far (although not always in the same position) has been blamed for the collapse of the Loch Maree sea trout fishery and we can only perceive that as an angler and fishing guide, Mr Smith’s concern about the environmental impact of the Loch Ewe farm relates to the wild fish that still live in the Ewe System.

Mr Smith should be reassured that the salmon farm’s impact is localised and that how much impact it has on wild fish is questionable as the conservation status of the River Ewe has greatly improved. For 2019, the River Ewe has now been classified as Grade 1. According to the Scottish Government, exploitation in the River Ewe is now sustainable and no additional management is required. Anglers like Mr Smith are now free, subject to any local regulations, free to kill any fish they catch from the River Ewe.

The new conservation regulations also identified another river that has been classified as Grade 1 for 2019. This is the River Blackwater in Loch Roag in the Outer Hebrides. By coincidence the Blackwater featured in the Landward TV programme with regard to the major fish kill that is being blamed on one of the local salmon farms.

Landward showed some pictures of dead salmon that were taken by ‘Lewis Chessman’ which we have seen and commented on previously. We, at Callander McDowell, are puzzled by the whole event. Aside from a press release from Salmon and Trout Conservation, who have their own agenda, there has been no publicity about these deaths. Certainly, there has been nothing in the local press or the mainstream papers. Whilst the fish died at the end of July, the two main salmon angling magazines have only just mentioned it in their November issues. Trout and Salmon magazine reported on Page 93 that the One Show had shown secret filming of Loch Roag salmon farms and that more that 80 wild salmon infested by up to 700 lice each had been found dead at the mouth of the nearby Blackwater river.

Fly Fishing and Fly Tying found space on page 13 to report of the secret filming but mentioned only that campaigners claim that lice had spread to local adult wild fish which were infested with 700 lice per fish and they died before being able to spawn.

It is difficult to understand how such a ‘major’ event received so little coverage. With a camera in every mobile phone, we cannot understand why more photos were not taken, especially of fish caught by anglers before the deaths occurred.

We understand that a documentary film has been made of the events at Garynahine but it is not being made public to prevent obfuscation. Our only comment is that this is yet another example where demands are made of the salmon farm industry to release every miniscule piece of data relating to their operation, but in return the wild sector remain secretive. We have commented previously that catch data for all of 2018 will not be released until well into 2019 and even then, it is aggregated for the whole fishery district. It is extremely difficult to obtain any data for individual fisheries.

Returning to the Landward programme our final comments concern the summing up by Andrew Graham Stewart of S&TC. He told the programme that ‘if we got back to natural background levels of sea lice, I’ve absolutely no doubt that wild fish populations in the west highlands would recover’.

We have often tried to meet with Mr Graham Stewart without success, but if he did agree to meet we would ask him to what level of catches would he consider stocks to have recovered? In the case of sea trout, we have repeatedly shown the graph of sea trout catches since 1952. 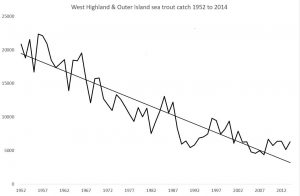 Would he like to see recovery back to 1952 catch levels because that would be about thirty years before salmon farming really became established or would he just like catch levels to be at a level before salmon farming arrived. The graph shows that this would be not much different to current levels. For salmon, the River Ewe is now a Grade 1 river so has recovered, so much so that Mr Graham Stewart took a holiday there earlier this year to go fishing. It can’t be all that bad. We should perhaps mention the east coast too. Sea trout catches from the Deveron and the South Esk, two key sea trout rivers, are also in decline. Stricter regulation of salmon farms will be of no help to them.

No way: Intrafish reports that fish consumption amongst those under the age of 34 has almost halved since 2012. Seafood consumption in this age group has fallen by 46%. Overall, consumption in Norway has fallen by 17% with the highest reduction experienced by those who are single and under 30. This new research from the Norwegian Seafood Council found that the overall picture for consumption by young people is bleak. Whilst they eat the least fish, many don’t eat fish at all.

The main reasons given for this fall is high price, poor selection and better meat offerings.  We, at Callander McDowell, think that this last reason is the most likely to account for the biggest falls. Asbjørn Rørtveit of the Seafood Council is right to be concerned. He says that if younger people don’t eat seafood, they wont pass on the experience to their children. Inevitably, as older seafood consumer pass away, they won’t be replaced with those growing older.

We are not surprised by these findings. These are trends that are being repeated across the developed world. Just because Norway is a main supplier of fish and seafood to many countries around the world does not make them immune to declining consumption at home.

The Council now aim to try to increase consumption by 20% within two years but Mr Rørtveit believes much must be done if this is to be achieved. He says that there must be campaigns that change people’s opinions from fish is dull to fish is fast and easy and these campaigns must be aimed at the young. He says that maybe to make seafood consumption more of a tradition with Taco Friday or Sushi Sunday. It wasn’t that long ago when sushi was being hailed as the solution to getting young people to eat fish. We were sceptical at the time and clearly it didn’t work.

Unfortunately, we are not convinced. Instead, we believe that radical change is needed but we suspect that this might be a step too far for what is a very traditional industry.