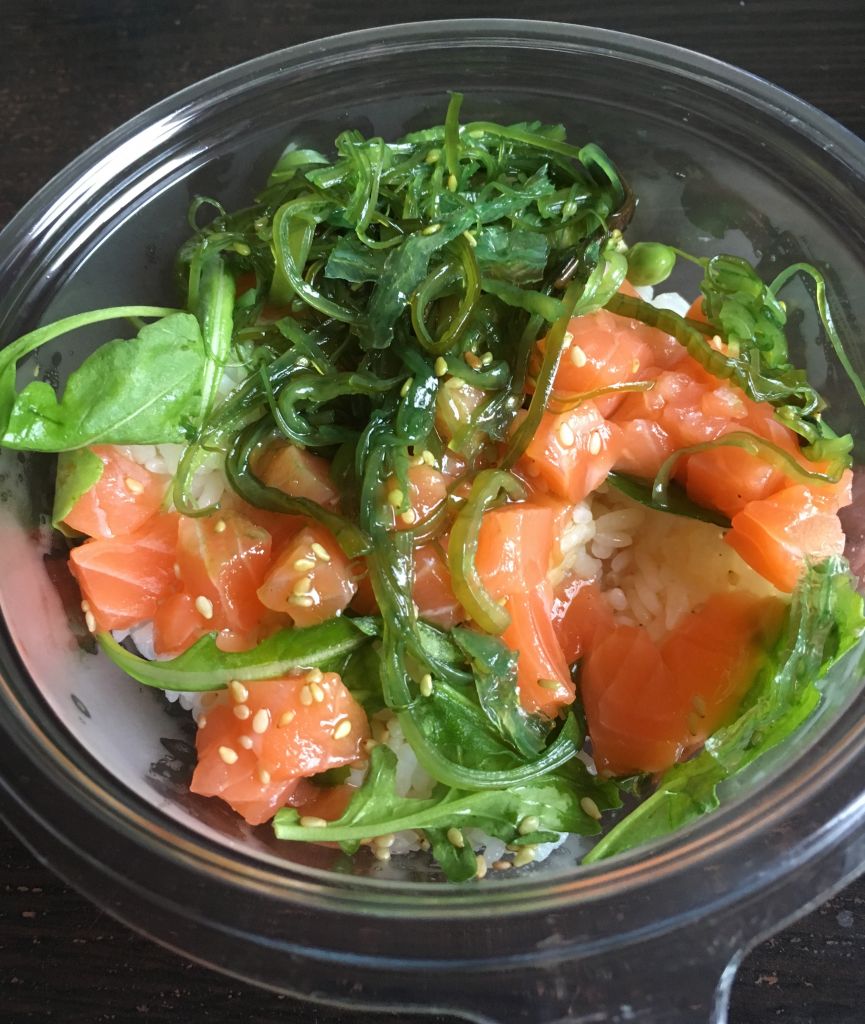 Not so stupid: BBC News reported that rainbow trout sold in China can now be labelled as salmon.  Seemingly, rainbow trout have always been labelled as such but a recent row in the country had highlighted the practice and rather than ban this labelling the Chinese authorities have decided to legitimise it.

This has prompted a furious backlash from consumers who are concerned that freshwater trout may contain parasites that can be passed on to humans. The BBC say that the main difference between trout and salmon is that trout are freshwater fish whilst salmon grow in the sea. Of course, it is now well-known that trout can be grown in seawater in the same way as salmon and certainly large fillets of sea grown rainbow trout look very much like salmon fillets. This is one of reasons behind the Chinese decision. They say that all species of fish in the Salmonidae group can be named as salmon.

Whilst this decision has been received with some incredulity in the west, it is not as crazy as it first appears. The Salmonidae group consists of 10 different genera including the pacific salmon Oncorhynchus and the Atlantic salmon Salmo.

Below is a list of the Latin names for Chinook salmon, Sockeye salmon, Coho salmon, Pink salmon, Keta salmon and Rainbow trout. Most consumers are unlikely to be able to identify one of these, let alone say which is the rainbow trout from these names. They all seem very similar. Rainbow trout has the same Oncorhynchus name as salmon so why not call it salmon too

For comparison, the Latin names of Atlantic salmon and brown trout are as follows:

Even the brown trout has a sea going form and most consumers would be unable to tell the difference between and Atlantic salmon and a sea trout.

Maybe the Chinese are not so stupid after all.

However, we at Callander McDowell wonder how much its focus on issues such as salmon farming has bored its readership. The Sunday Herald has repeatedly published stories emanating from many Freedom of Information requests targeting salmon farming. All the stories have been extremely similar and to everyone, but the hardened critics just become tedious to read. Given the cost of print newspapers, readers want not only value for money but wide coverage of a variety of issues not just to read that farmed salmon are blamed yet again for a decline of wild fish.

Big chips: The Times newspaper reports that a survey of take-away food establishments in Glasgow has found that the average portion of chips has almost doubled in size since 2002. Obesity Action Scotland found that the average portion of chips now weights 380g compared to 210g in a previous study. The group collected 40 samples of chips with the largest weighing 755g and smallest just 120g.

According to Food Standards Scotland (FSS), chips are the most popular food eaten outside the home, but the concern is that the average bag of chips contains over half the recommended calorie intake for a woman. Obesity Action Scotland say that people should have access to smaller portions and be aware of the number of calories they eat. FSS plan a consultation for later this year into how the takeaway sector can become healthier.

According to the National Federation of Fish Fryers (NFFF) an average portion of chips is 10oz or around 280g so the average in Glasgow weighs an additional 100g or 3.5oz. Based on FFF data a 25oz portion of chips would contain 1473 calories and 59.5g of fat. This equates to 708g so the 755g portion bought in Glasgow would exceed these values.

NFFF say an average portion of fish (6oz) and chips (10oz) would provide 998.8 calories and 52.3g of fat although their figures for the two bought separately suggest that this might be a healthier option with the 6oz portion of cod providing 240 calories and 17.3 g of fat and 10oz of chips 589 calories and 23.8g of fat giving a total of 829 calories and 41.1g of fat.

NFFF provide calorie and fat values for different sizes of battered cod and chips but it is clear from the Glasgow samples that portion size can vary significantly.

There are conflicting messages as to whether fish and chips are a healthy choice. Hopkins, a company selling fish frying equipment, say on their website that fish contains many beneficial nutrients and whilst some say that fish and chips make you fat, the fat content is 48g which they compare to 52g in a lunchtime sandwich of cheese and ham with mayo. We mention this because we think this comparison is misleading since Sainsbury’s sell a smoked ham and cheddar cheese sandwich with mayo that is 386 kcal and has 14g of fat. The highest declared level of fat in any sandwich we can find is about 26g, well short of the example given.

The National Health Service website offers advice on how to make fish and chips the healthy option. They suggest avoiding eating the batter and to select chippy’s selling thicker cut chips. Millers of Haxby, the fish and chip shop that won the fish and chip shop of the year award offer their customers a healthy choice option of a small piece of haddock and a small portion of chips for £4.10. They say this is less than 500 calories. Unfortunately, they do not indicate the calorific value of their standard haddock and chips (£6) or their jumbo version (£8).

Miller’s menu does feature mainly fish and seafood items although they do sell pies (chicken & mushroom, beef and onion and steak). Back in 2010, the Daily Express looked at the various options offered by a range of takeaways including fish and chips. Their choice for the unhealthiest option was pie and chips with 927 calories and 50g fat. A better choice was medium cod and chips at 838 calories and 48g fat which doesn’t seem that much different from the pie option. Their recommendation for a healthiest choice would be a mini piece of cod with a potato scallop which provides 555 calories and 30g of fat.

That pies are highlighted as the worst choice is interesting because many fish and chip shops do offer a whole range of alternatives to fish and chips from pies to fried chicken sausages and even pizza. Some of these items are considered unhealthy choices. Hollands Pies are a local producer in the North West of England and supply many fish and chips shops with pies. Their meat and potato pie contain 379 calories and 17.1g fat. The steak pie has 429 calories and 19g of fat.

The inclusion of pies etc on fish and chip shop menus is something that we have regularly considered over the years.  It is only necessary to stand in the queue of any popular fish and chippy to see how many customers choose these alternatives over the traditional fish and chips. Of course, price is a factor, but it is clear that no-fish items are an important source of income to fish and chip shops. Perhaps, this is one reason why the fish and chip sector are not perceived as being the top of the list when it comes to healthy choices.

Sock it: One of the clear benefits of farming whether on land or sea is the consistency of supply. This is becoming more evident with the news from British Columbia that the Fraser River has been opened for commercial fishing for the first time in four years. Business in Vancouver (BIV) reports that returns of sockeye are now strong enough to support a 24-hour sockeye commercial opening. There were concerns that returns in some Canadian river systems might not be as strong as expected but the Skeena river is also exceeding expectations.

This year, the expectation is around 14 million Sockeye will return to the Fraser river with the possibility of a maximum of 22 million. The number of fish returning each year varies considerably. In 2009, it was just 1.6 million fish followed in 2010 by 28 million. In 2014, the number was 19 million. BIV say that although there have been concerns about falling stocks, historic data shows that sockeye were more abundant during the 2000s than they were throughout the 1960s. Over three four-year cycles between 2006 and 2017, 80.8 million Sockeye returned to the Fraser river whilst from 1960 to 1971 the number was 54.4 million.

BIV provide a graph of historic sockeye returns to the Fraser River. The graph runs from 1890 to 2017.

Whilst news of another bumper sockeye return has been welcomed across British Columbia, salmon farm critic Alexandra Morton has remained strangely quiet. In 2014, she wrote in her blog that ‘The weight of evidence suggests the presence of salmon farms on the migration routes in and out of the Fraser River determines whether the sockeye will return’. Yet on this graph it can be seen that from the early 1980s returns have actually grown in number. Clearly Ms Morton appears unaware of the run of poor returns from the 1920s to the 1970s. We can only wonder what explanation she can offer for this long run of poor returns.

This reluctance to acknowledge declines in runs prior to the advent of salmon farming reminds us very much of the situation in Scotland. It is evident that wild fish were in decline along the west coast long before the arrival of salmon farming, yet no-one appears either able or willing to provide an explanation of what had caused these declines. Instead, all the discussion is about the impacts of salmon farming.

Poking around: The Des Moines Register reports that a new restaurant will soon be opened in downtown Des Moines by the Poke Company. Prices will range from $9 to $15 per bowl which will consist of either pieces of raw yellowfin tuna or raw Scottish salmon with fresh cut vegetables, rice and other toppings.  Cooked shrimp or tofu will also be available.

However, for anyone wishing to try a Poke Bowl, there is no need to have to wait or to travel to Des Moines, Iowa because the supermarket Waitrose in the UK is already selling a version in their stores. Aloha Poke Hawaiian Salmon Salad costs £3.95 for 217g. The salad is described a ‘A Poke bowl with sushi rice, raw salmon, wakame seaweed salad, edamame beans, rocket and spring onion with soy sesame dressing and avocado mousse.

We, at Callander McDowell, have taste tested the Poke and we would say that for a prepared salad it was actually very nice and something we would certainly eat again. We are not alone as the Waitrose website also includes glowing reviews from their customers.

This Poke bowl contains 14% fish and we would suggest that this is the sort of product that may persuade those consumers who don’t eat fish to start doing so. The fish is actually incidental to the salad and thus consumers might see it as a salad with some fish rather than as a fish product. It is certainly an attractive alternative to the lunch time sandwich along with which the Poke is displayed. 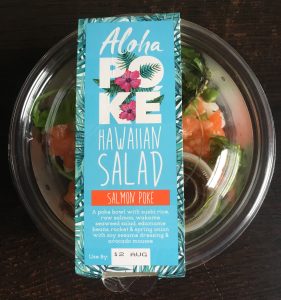 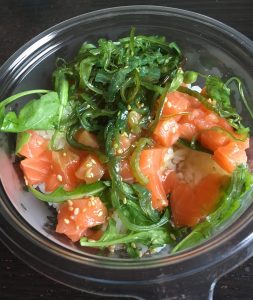