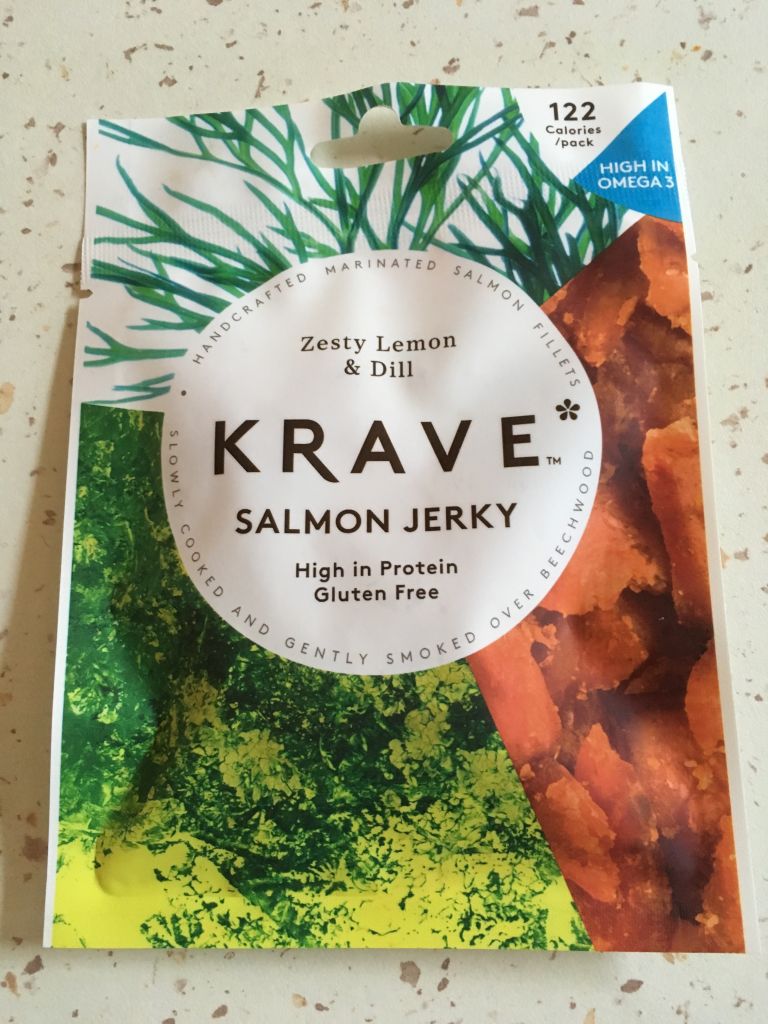 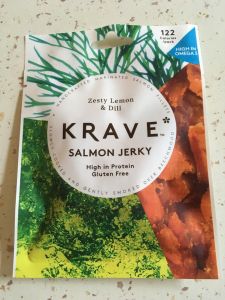 Foreign owned: Back in March, Scottish Rural Action produced a report showing the breakdown of employment in rural areas. In the islands and remote areas of Scotland, 8% of those employed worked in fisheries and agriculture including salmon farming, whereas 16% worked in tourism.

At the time, the salmon farming critics suggested that it would be better if Scotland invested more in tourism than salmon farming as the tourist industry creates many more jobs. What these critics failed to appreciate is that jobs in the aquaculture industry are full time and extremely well paid whereas the tourist sector creates seasonal low paid jobs.

The problems of the Scottish tourist industry have been laid bare in a couple of recent newspaper articles. The Guardian report that hotel workers on Skye have complained of being underpaid, denied holidays and given substandard accommodation. This is the findings of the local Citizens Advice Bureau, who have had 485 cases of low pay, lack of contracts, unfair dismissals and no holidays in 2016. They have been approached by over 200 workers in the last six months.

One hotel worker told the Guardian that he was summarily dismissed after challenging a hotelier when his wages did not include 100 hours of overtime worked over a four-week period. He said that ‘the day I got paid, I queried it and said I was going to seek legal advice. They responded telling me I had 15 minutes to pack my bag before they kicked me off the premises’.

Clearly, critics of salmon farming are so focused on sniping at the industry that they would prefer their local economy to be based on cheap, seasonal labour than create a permanent community with good spending powers.

The second article appeared in the Scotsman and focused on the flood of tourists and the impacts they make on the local infrastructure. The focus of the article is the island of Islay, which is well known for its unique whisky production. The whisky industry is growing alongside tourism so that three new distilleries are planned to open in the coming years even though there are eight distilleries already operating on the island’s 239 square miles.

In the summer, Islay’s 3,200 population swells to around 9,000 and up to 20,000 during the island’s whisky festival. The island’s infrastructure is struggling to cope at peak times. Roads are disintegrating under heavy use by tourist and the distillery traffic. The locals are outraged by some tourist behaviour. However, the aspect of the article that attracted our attention was the fact that these iconic distilleries are mostly foreign owned, and their Scottish identities are disappearing as the business becomes increasing corporate and gimmicky in order to attract yet more tourists.

One of the recurring criticism of the salmon farming industry is that some are foreign owned, even though they are run as separate Scottish operations. Isn’t it funny how foreign ownership is considered detrimental for salmon production, yet the ownership of distilleries attracts no attention at all?

Swap or not: The Big Prawn Company recently ‘tweeted’ a guide to the most sustainable swaps you can make in your seafood shopping.  The idea of swapping one type of fish or seafood for another that might be more sustainable is not new. The most high-profile example was when the supermarket Sainsbury’s ran their ‘Switch the Fish’ campaign in which customers who chose to buy one of the ‘Big Five’ species were also offered a free portion of a less popular species. Sainsbury’s ran the campaign on a couple of occasions a few years ago but have not repeated the promotion since. This was because despite giving away large amounts of fish, they were not able to convert their customers to buying these less popular species on a more regular basis.

The guide, about which the Big Prawn Company tweeted, was written by the GilsGilsGils blog which aims to encourage people to eat and cook more sustainable seafood (https://gillsgillsgills.com/). At a time when home cooking of fish and seafood is in decline, anyone trying to help reverse this trend should be welcomed. However, we would also hope that the advice such blogs hand out is sound rather than being erroneous

We are sure that the three Gils are well -intentioned but their guide leaves a lot to be desired and we are surprised that the Big Prawn Company has incorporated the guide into its website. We are even more surprised that SeaFish have retweeted the link.

The guide is titled ‘Simple and Sustainable Seafood Swaps’ and offers alternatives to the ‘Big Five’ species – Cod, Haddock, Salmon, Tuna and Prawns. It is the entry for salmon that especially caught our eye.

‘Salmon is SO overused. Weddings, brunches, canapes, Salmon and smoked salmon tend to be the old reliable choices. We’re used to it, even people who ‘don’t like fish’, like salmon. Whilst it is a great source of omega 3, being an oily fish, the overwhelming demand for this fish can lead to it being farmed and caught unsustainably and, similarly to cod, this demand drives up the cost. We’re not saying all salmon is bad, checking for MSC certification is crucial in selecting this fish, but why not try something different? It’s bound to jazz up that predictable scrambled egg pairing.’

The Gils Gals, as they describe themselves, refer to the MCS Good Fish Guide for inspiration and this confirms our view that the Good Fish Guide is largely out of touch with consumers. If those writing a blog about sustainable seafood are so misinformed, it is not surprising that so are the wider public at large.

The Gils Gals recommend that as an alternative to salmon, consumers should turn to ‘Rainbow’ (sic). They say that ‘rainbow trout are the most popular farmed species of trout’ and that shoppers should opt for organic trout as this is the best choice with regards to sustainability. This is also the recommendation of the MCS Good Fish Guide however, whilst we are experienced observers of the retail sector, we cannot suggest one single outlet that we know stocks organic rainbow trout. As we have said, the MCS are out of touch with the consumer market.

Whilst the Gils Gals offer alternative suggestions for the four fish species, their recommendation for prawns is that nothing compares to a prawn so instead they offer points to watch out for. They say that the prawns should come from ‘a low stocking density and are not being over-farmed. Even better if the prawns are able to swim in a natural environment with plenty of space – as you would want from something like beef or chicken’.

As we can’t find their guide on the Gils Gals website we suspect that it was commissioned by the Big Prawn Company. This is because in their guide to swaps, Sustainable Fish Cities suggest ‘ditching’ king or tiger prawns for mussels instead. They say that ‘King prawn production has been found to be socially and environmentally destructive and reports point to slave labour in both fishing and processing operations.’ Mussels are a good choice if that is what consumers want but as the Gils Gals point out there is nothing quite like a prawn. We do not understand why Sustainable Fish Cities wouldn’t even suggest cold water prawns as an alternative. The MCS say that the best choice is cold water prawns that have been MSC certified, so a sustainable option is available as are ASC certified prawns.

Sustain’s Guide (https://www.sustainweb.org/jelliedeel/articles/jun18_topoftheswaps/) also recommends swapping coley for cod, sole instead of skate, herring instead of eel and sardines for salmon. They say that sardines are one of the healthiest fish you can eat and are a good alternative to salmon. Salmon farming has recently been associated with overuse of chemicals and antibiotics and with increases in sea lice, which can be transmitted to wild fish. However, they do say that the best options for farmed salmon are RSPCA assured as well as ASC or BAP certified, neither of which are readily available in the UK.  However, as most salmon farmed in Scotland are RSPCA assured, then consumers are free to enjoy as much salmon as they like.

Its rather difficult to imagine a whole sardine being the centre piece of a wedding buffet as an alternative to a whole salmon!!

We, at Callander McDowell, are unimpressed with the whole idea of ‘swaps’ when it comes to fish and seafood. Our view is that home consumption of fish and seafood is already in such decline that telling consumers to avoid one species in favour of another will simply speed up the decline. If consumers are told to avoid the Big Five, the likelihood is that they will opt to buy chicken etc rather than look for alternative species of fish. We have always held the view that if a species should not be consumed then it shouldn’t be available on the fish counter. If it’s there, then there is no reason why consumers shouldn’t buy it.

Rather than undermine specific fish species, we should be championing those species that we want consumers to eat. In our view, these should be farmed species since farming is inherently sustainable.

It doesn’t help that there is still so much misinformation in circulation about some species. There is still a lot of nonsense spoken especially about farmed species, yet this is not surprising given the hidden agendas that lurk behind some of the advice that is so freely dispensed.

What a jerk: Salmon Business reports that Europe’s biggest producer of jerky and biltong is launching the first salmon jerky into the UK market.

However, we would suggest that this is not exactly true as UK consumers can already buy salmon jerky in Sainsbury’s supermarkets. It is produced for Sainsbury’s by Marine Harvest and is available in chilled packs in two flavours. The new product from the Meatsnacks Group is also salmon jerky but is different because it is dried and therefore is sold in an ambient pack. By coincidence, the new packs are also to be stocked by Sainsbury’s.

Meatsnacks have rebranded their dried protein snacks into various versions including Krave, which is aimed at a more female audience. This is because jerky is often seen as a male snack associated with sports and body building.

The new product is produced at the Spey Valley Smokehouse in Granton on Spey as what the company call a premium product. This is because the process reduces the salmon by 50%. The Krave product of dill and lemon salmon jerky is being sold in Sainsbury’s for £1.80 for 30g. By comparison, the Sainsbury’s brand chilled jerky costs £1.75 for 55g.

Taste-wise, we found a huge gap between the ambient jerky and the chilled version.  The Krave lemon & dill salmon jerky states on the pack that after ‘one bite, you’re transported to the fresh flavours of Scandinavia’. We weren’t. 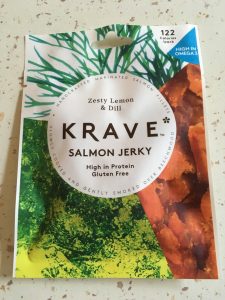 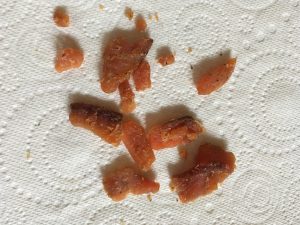 Jerky by nature is dry and supposed to be rehydrated in the mouth. There was a slight taste that developed during chewing, but it didn’t burst with flavour. It still tasted dry and a bit bland.

The jerky is handcrafted and slowly marinated to develop the delicious flavours and then dusted with herbs and citrus. Whilst there was a slight fishy taste, this jerky failed to live up to expectations.

By comparison, the chilled version was coated with a sticky marinade that gave it both flavour and a moist taste. It might be argued that a moist product is not jerky, but the marinade definitely made it tasty. Of the two versions, we preferred the salt and pepper flavour. In fact, we found it rather addictive. 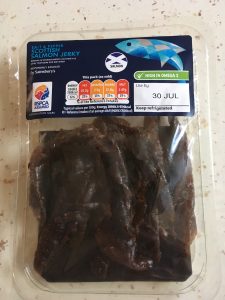 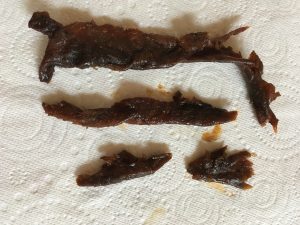 The advantage of the Krave version is that it can be easily kept for snacking but on balance there are many more flavoursome snacks available that would tempt us away from this salmon jerky. We would however keep a pack of the chilled version in the refrigerator for the occasional treat.