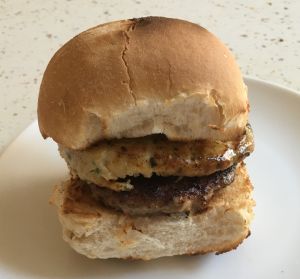 McDs: We have argued, for more years than we care to remember, that fish and seafood consumption will not increase if we only try to persuade consumers to eat fish in the form we produce. There are reasons why those consumers who don’t eat fish or do so only rarely choose to not to eat it. This can be a massive obstacle to increasing fish consumption. Instead, we believe that we should look at what those consumers do eat and adapt our offering accordingly.  One simple example would be McDonalds.

McDonalds are estimated to serve 6.5 million burgers every day worldwide. The assumption must be that burgers are very popular with consumers, especially younger consumers. What if that burger was made from fish or seafood. Might it appeal to McDonalds customers as an alternative to the traditional hamburger. The evidence from their current fish offering would suggest not. The Fillet-O-Fish is not hugely popular. This is evident from the fact that they always must be ordered and unlike burgers, they are never ready cooked. A Fillet-O -Fish is more of a fish sandwich than a burger but the question is whether a fish burger would be accepted by the traditional McDonalds customer. We are not so sure. It may be a step too far.

Instead, we have always considered that a half and half might be the bridge between burgers and fish. Simply, a turf and surf burger – a meat burger and a fish/prawn burger together in the same bun. However, we suspect that even this format might be a challenge against the standard McDonalds offering. McDonalds may already have the answer in the UK with their ‘Great Tastes of America’ range offered as a promotional special. This includes the Tennessee Stack – two burgers with smoked bacon, smoky cheese, onions, lettuce and Tennessee style BBQ sauce in a bun. There are endless options – see later.

These thoughts have been prompted by the news that McDonalds Singapore have launched a salmon burger (https://www.mcdonalds.com.sg/hokkaidosalmon/) Their website also includes access to the TV advert used to promote the new burger (also at https://www.youtube.com/watch?v=3N5LPhCK4lw) . According to Intrafish, it is named the Hokkaido salmon burger and the Japanese inspired burger was created in celebration of the 150th anniversary of the naming of Hokkaido city, although we suspect that the name has more to do with the fact that Hokkaido Island has a large chum salmon fishery with a catch of 100,000 tonnes, which is supplying the fish for the burger. The panko crumb covered burger is accompanied by shredded white cabbage, sliced onions and roasted sesame mayo on a black and white sesame bun and costs the equivalent of $7.70.

The consumer response to the burger can be seen at: https://www.youtube.com/watch?v=XGb3Z59XxDw and at https://id-vid.com/video/is-mcdonald-s-hokkaido-salmon-burger-worth-your-calories-JeHSTWMPRJo.html . It seems that it is liked but there are concerns that that the salmon is dry. This is not surprising given that it is made with chum salmon. We suggest that it would be much more succulent if it were made from farmed Atlantic salmon instead. Maybe one day we will find out.

McDonalds in Norway did try a farmed salmon product some years ago. It was a healthy salmon wrap, but it was not a great success as it wasn’t a burger. Norwegiab consumers can now buy a salmon burger but not from McDonalds. According to Salmon Business, Pink Fish (https://www.pinkfish.no/) is a salmon based fast food outlet, that already has ambitious expansion plans in Norway and Asia. It offers salmon burgers in three varieties as well as salmon soup, raw salmon and wraps. This concept might work in Norway but we do have reservations since it relies on everyone wanting to eat salmon. Even McDonalds has a range of dishes with chicken meat and fish. However, we hope Pink Fish does well.

Turf and surf taste test: It has been a while since we taste tested a new product but, in this case, it is a concept rather than a new product. We constructed our own turf and surf burger from a meat patty and a Morrisons salmon and cod fish burger.

Actually, it was quite pleasant for a first attempt, but we would imagine it would be much improved with a patty made from 100% salmon as well as lettuce and a sauce.  Maybe we would call it a Washington State burger! 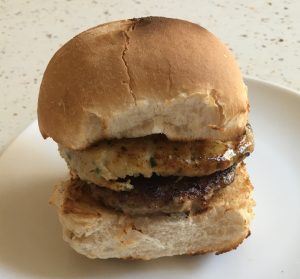 ASC & ALDI: The REC Committee recently tweeted a link to the notes of the video conference they held with the Aquaculture Stewardship Council (http://www.parliament.scot/S5_Rural/Inquiries/20180424_-_Summary_of_notes_from_meeting_with_Aquaculture_Stewardship_Council.pdf ). This was held whilst the ASC were attending the European Seafood Show in Brussels last month. We were particularly interested in the comments about consumers and the ASC amongst which the ASC admitted that they cannot say that there is a price premium for ASC certified fish and seafood. They suggest that market forces may make this happen. We very much doubt it. Consumers won’t pay extra for certified sustainable seafood. There was a paper suggesting that they would, which appeared some years ago however, when we looked at the alleged price premium, it was apparent that the premium related to other factors including branding.

The other point made by the ASC which pricked our interest was the statement that: ‘Major retailers in the UK feature some ASC products, but not at the same level currently seen in Europe (exception is Aldi)’.

We have certainly seen stores in Europe where the ASC logo is more apparent than stores in the UK. We don’t think that the logo actually attracts customers to the store. It is just there. Equally, if the logo disappeared overnight, we don’t think it would make any difference to sales and most likely most customers wouldn’t even notice its disappearance.

What particularly caught our attention was the three words in parenthesises – ‘Exception is Aldi’. The implication is that Aldi UK carries the same level of ASC logo penetration as in their European stores and this is higher than in other UK retail stores. This is not our experience.

Firstly, it is important to point out that as the REC Committee were investigating the salmon industry, the ASC did not make it clear that when they said that major retailers in the UK feature some ASC products, they did not necessarily mean salmon products as other species are also certified by the ASC.

The implication of the ASC’s comments is that Aldi are stocking products with the ASC logo at the same level as their European stores. At the moment, Aldi in the UK appear to be stocking just two ASC certified products, both frozen, and both made of Basa (Panagasius). One is a bag of frozen Basa fillets (400g including ice, £1.75) and the other Lemon & herb lightly dusted Basa fillets (320g £2.99).

By comparison, Sainsbury’s stocks six products carrying the ASC logo, three of which are chilled and three are frozen. All are variations of Basa products – natural, smoked and dusted. However, Waitrose can trump that with ten ASC certified products although not all will be in the same store at the same time as five of the products are just size related variations of two products. Eight are chilled and two are frozen and unlike Aldi and Sainsbury’s, none of Waitrose’s offerings are Basa. Instead, Waitrose offer a range of ASC certified farmed prawns. 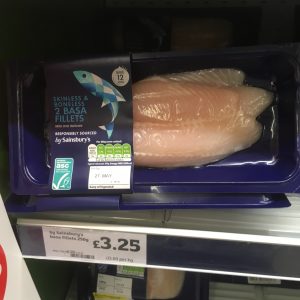 However, Lidl have just started to stock ASC certified smoked salmon. It is priced the same as when it was not certified, indicating the absence of a price premium. The salmon is Norwegian and is smoked in Lithuania by a Belgian company. 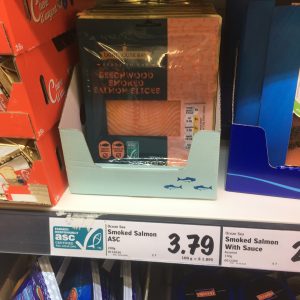 There is one store that does stock ASC certified Norwegian salmon in the UK and that is IKEA but whether the public head to IKEA purely to buy ASC salmon is unlikely.

Health strategy: The Scottish Fisheries Minister, Fergus Ewing opened the Aquaculture UK event at Aviemore this week with the announcement of the eagerly anticipated ‘Health Framework for Aquaculture’.  Fishupdate.com reports that amongst a whole host of recommendations, the aim of the framework is to continue improving the control of sea lice on farms and ‘potentially reduce interactions with wild fish’.

Fortunately, Marine Scotland Science have been conducting a three-year experiment on both east and west coast rivers to identify the relationship between salmon farms and wild fish. Their final report is currently being peer reviewed and hopefully will be published shortly. We will then know whether salmon farms do have an impact on wild fish or not.

For us at Callander McDowell, the problem is that the myths connecting the decline of wild fish to salmon farms continues to be perpetuated in the scientific literature. The Norwegian blog Aquablogg.no recently turned its attention to sea lice research conducted in Scottish waters http://aquablogg.no/skotske-luseforskere-har-samme-agenda-som-norske/ .

The blog considered the data from three different papers including one that has just been published https://onlinelibrary.wiley.com/doi/abs/10.1111/jfb.13625

The abstract states that ‘total lice burdens were highest in fish sampled near S.salar farms and decreased with distance’.  This was determined by sampling fish caught from five sea locks around the Isle of Skye that were of varying distance to the nearest salmon farm. The table of results appears to be randomly organised but if it is rearranged in the proximity to the nearest farm, then it appears as follows:

It can be clearly seen that the lowest lice count is from the sampling site nearest a farm. The highest counts are in the middle distance. However, this might be explained by the method of sampling. The largest seine net used in this study was deployed in Loch Snizort. We don’t know if this is the reason, but a larger net will sweep a bigger area and is likely to catch a larger number of weaker fish.

It will be argued that the raw data doesn’t reflect the picture determined by statistical analysis. In this case, it seems that five different statistical models were used in the analysis, yet the raw data appears to tell its own story. It is also worth mentioning that of the 230 fish sampled, 52% were free of lice. It would be interesting to know where these lice free fish were sampled.

Critics of the salmon industry have already been tweeting about this paper saying that here is more scientific evidence that migratory trout are more prone to sea lice when in the proximity of salmon farms. Yet, we have to be convinced that the claims are supported by the data.