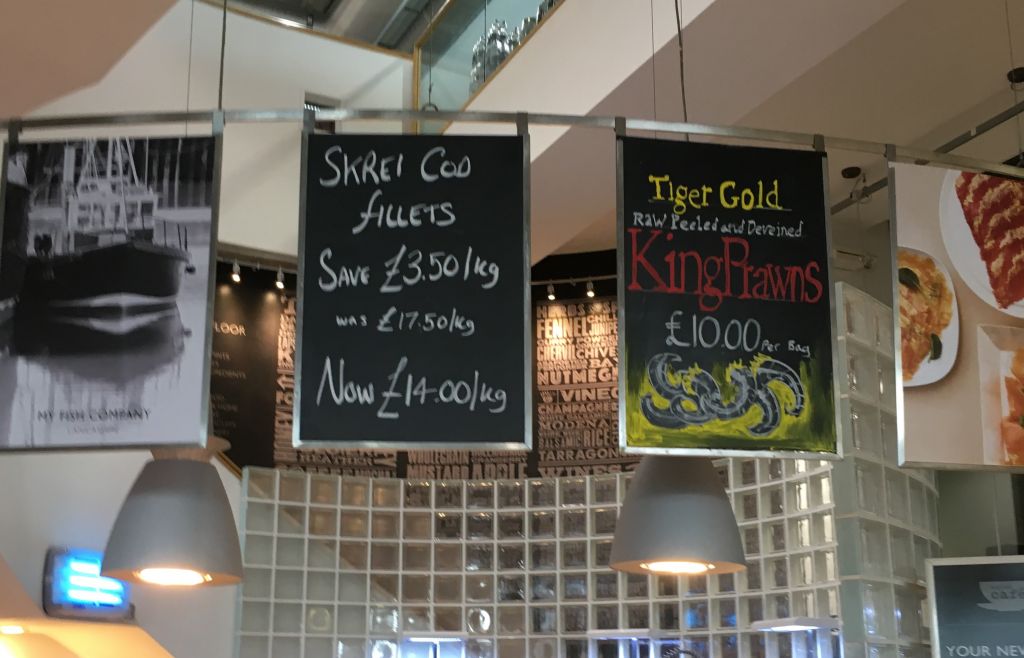 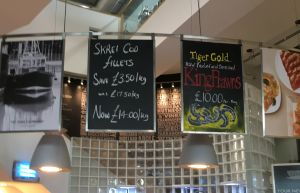 ECCLR report: There is lots we could write about the Scottish Parliament’s ECCLR Committee report on the impact of salmon farming on the environment and we may yet publish our views separately. We would however have hoped that any Committee sitting in judgement of the salmon farming industry would have visited a salmon farm to see any impacts for themselves.

£700K research: The publication of the ECCLR report has coincided with the news that the Scottish Government has awarded £700,000 to help tackle the fall in wild stocks. According to the Herald newspapers, Scottish Ministers have said that survival rates for salmon at sea have fallen from around 25% forty years ago to about 5% now. Environment Secretary Roseanna Cunningham has said that the decline is due to a range of complex factors and while the exact causes of the dramatic loss are unclear, we must do all we can to safeguard the future of this iconic species. She said that the investment will accelerate and enhance joint work to try to quantify and mitigate a wide-ranging list of potential pressures on Scottish salmon stocks such as forestry, hydro, barriers to migration, predation, illegal poaching, salmon farming, invasive species, inshore and off-shore developments and diffuse pollution. No single one of these will secure the recovery of our wild salmon stocks, she said. £500,000k of the funding is to help count juvenile salmon numbers in rivers before they head to sea.

Remarkably, we notice that there is a major omission from the list of potential pressures on Scottish salmon wild stocks and it is one that is the easiest to address. This is the exploitation of stocks. We can understand why it is not included in the list because any suggestion that exploitation is affecting stocks will cause huge uproar from the wild fish sector. We have heard many times that ‘what difference will it really make if I take home just one fish?’ The answer is probably none, but if one million anglers say the same thing, it means a million less salmon that are able to breed and regenerate new stocks.

This raises an interesting point about the £500,000 project that has been unveiled. What will be measured in those rivers where anglers can catch and kill fish that have returned to breed? Surely, what we need to know is the natural standing stock of juveniles over a number of years. If breeding fish are being killed, it is possible that the number of juveniles will not reflect the true state of the salmon stock in the river. As we have already seen, the conservation limit can change from year to year so in our view, there is only one solution to running this project in a way to obtain meaningful results and that is that all rivers in Scotland should be graded as a Category 3 river and no exploitation should be permitted for at least three years. This would be in line with the restriction on commercial netting that is currently in progress. It will also show how much impact exploitation will have on overall stocks. In our view, without a ban on exploitation, this project will be a total waste of Scottish Government money.

This reminds us of a point made to the ECCLR Committee by Scottish Natural Heritage in their submission. They say that it is important to demonstrate that elevated levels of sea lice on wild salmonids are effectively managed if salmon farms are located near a Special Area of Conservation (SAC). Presumably, their concern is that sea lice could impact on, and even kill, stocks of wild fish within the SAC.

Their concern is surprising. There are SAC’s which designate salmon either for primary or secondary important across the whole of Scotland. Last year, the Scottish Government categorised 12 of these SAC’s as Grade 1 fishing rivers, two as Grade 2 and three as Grade 3. The difference between these grades is that Category 1 rivers can be exploited. Category 2 rivers can be exploited in the first instance but need to be kept under review, whilst Category 3 rivers are considered unsustainable and where catch and release is mandatory. What this means is that last year, anglers could catch and kill wild salmon from 14 rivers that were designated as Special Areas of Conservation. We fail to understand why there is concern about whether sea lice numbers are elevated near SAC’s but yet, the very fish populations that are supposed to be protected can be killed at will by anglers.

We, at Callander McDowell, don’t have a problem if anglers want to catch and kill wild salmon. We just don’t like it when they blame everyone but themselves when the wild salmon stocks are in trouble.

More research: The £500k research project instigated by the Environment Minister reminds us that the ECCLR Committee say that there is a need for more data collection and research and there are gaps in knowledge within Scotland. We are not so sure. There is more research underway than has been made out.

For example, Marine Scotland are undertaking a ten -year programme of research to investigate any potential risk to wild salmon from sea lice in the Scottish coastal environment. This is intended to complement another research project which is now drawing to a close. This SARF funded project measures the survival of smolts treated with anti-lice chemicals and compares them to untreated controls. The project was to trap and tag up to 2000 smolts from the River Lochy and another 2000 from the Connon System (east coast). Half the fish would be then treated with ‘Substance EX’ during April 2015 and 2016 and released along with the other ‘control’ half of the fish. Then during September to December 2016 and 2017, the two rivers would be fished, and the relevant data collected.

Whilst, the project still has six months to run, this period is intended for writing up etc, but clearly, by now Marine Scotland must have some idea as to the impacts of lice on the smolts they released and although too late for the ECCLR Committee, they should be able to provide the REC Committee with a flavour of their findings. After all, if this enquiry is not the time to present this data, when is? We hope that the REC Committee will call Marine Scotland Science and ask them to present their results.

The report also refers to the submission from Lochaber Fisheries Trust saying that wild fish are not monitored in Scotland, yet the Lochaber Fisheries Trust submission mentions that they sampled 83 sea trout near Fort William in 2017. In fact, most of the fisheries trusts have been sampling young sea trout over many years. This was the basis of the RAFTS study previously mentioned and also that of some of the work carried out by Marine Scotland. This work is still underway and just needs to be co-ordinated to bring all the results together.

Most of the sampling is of sea trout because as the anglers regularly point out, salmon smolts head straight out to sea and out of reach.

According to the ECCLR report, Lochaber Fisheries Trust also mentioned that no large-scale studies on the effects of lice on the overall health of salmon and trout populations has been completed. This is incorrect. Our own study is exactly that. We have monitored the catch data from all 109 fisheries across Scotland from 1952 onwards and compared catches prior to the arrival of salmon farming with those after. We did provide a single graph from this study in our submission showing that west coast sea trout have been in decline since 1952 and probably before, but the ECCLR chose to disregard this piece of evidence.

60 minutes: Marine Harvest have announced that they aim to open 2000 salmon restaurants in China and Taiwan in the next few years.

Dagens Naeringsliv report that all the dishes will be based on salmon, even the desert in the form of salmon sorbet (although regular ice cream is available too). The idea is casual fast food but in a niche above McDonalds and Pizza Hut.

We, at Callander McDowell, remain slightly sceptical but the one aspect of the article that caught our attention was the sentence – You should be able to have a good meal at an affordable price is you have an hour’s lunch break.’

Who still has an hour for lunch?

Skrei Day: The ‘foodie’ sector in Manchester, where we are based, is permanently disappointed that the city has yet to acquire a restaurant with a Michelin star. It is on ongoing bugbear.

One of the nearest Michelin starred restaurants, Northcote Manor, is about 40 km north of the city. They have an excellent reputation and their chefs have regularly appeared on national TV food programmes. The restaurant has just sent out its latest newsletter and one of the items is about their sous chef Danny Young who is also National Young Chef of the Year. One of the prizes given as part of this award was a fishing trip of a lifetime to Norway with chef Michel Roux Junior.

Danny details his trip up to Tromsø and onto Sommarøy, where he boarded a boat to go line fishing for Skrei, which he says is a member of the cod family. Danny caught 3 fish, but he was told by locals that the fishing was poor on that day. Back in Tromsø, Danny had the opportunity cook Skrei with a group of local college students. He had time for leisure before having to return to his home county of Lancashire.

Having travelled so far, we were interested to see what Danny would bring to the Northcote Manor menu with his knowledge of Norwegian Skrei and a dish of Skrei is on the Sunday Lunch menu served with butternut, barley and sprouting broccoli. However, cod also features on the daily lunch menu, served with butternut and ginger and coriander. The fish however is described as ‘North Sea cod’ and is presumably locally landed fish. 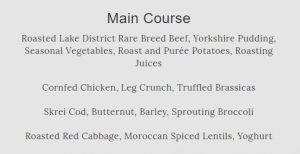 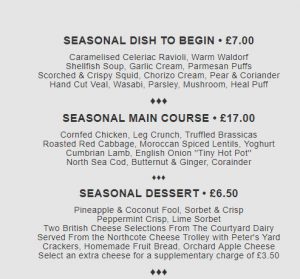 Skrei is not widely available in the retail sector but one of the limited number of outlets for the fish is Booths supermarkets, a small chain in the northwest. This week Skrei was on promotion and selling for £14/kg; a saving of £3.50/kg bringing it below the price of Booths cod fillet which typically is Icelandic and normally sells for £15/kg.

Even if consumers opt for Skrei, the season will soon be over. 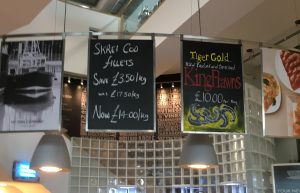 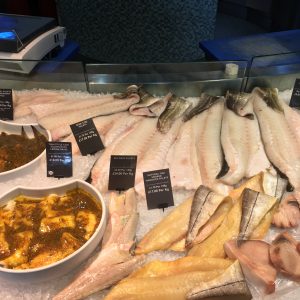