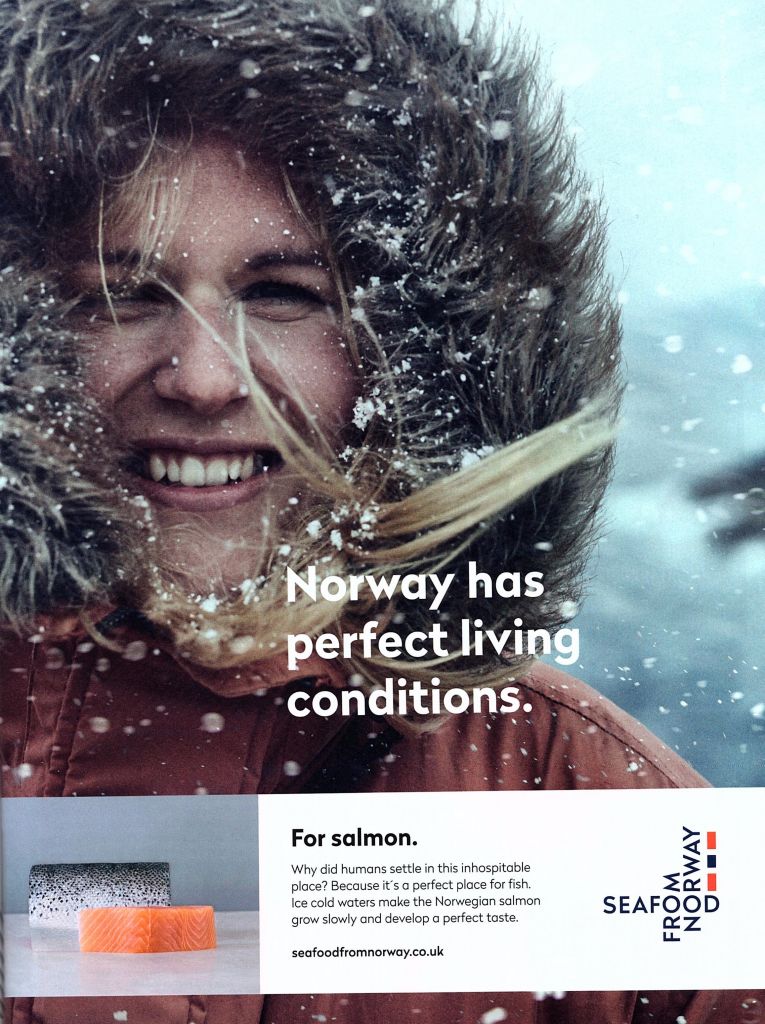 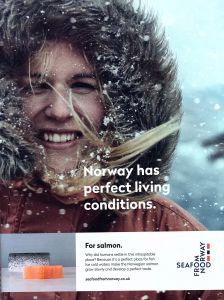 Why you should read this book: For over forty years, the salmon farming industry has been cited as the cause of declining stocks of wild salmon and sea trout along Scotland’s west coast. After such a long time, it will be hard to accept that there may be an alternative narrative that explains why wild fish are not as numerous as they once were. The book Loch Maree’s Missing Sea Trout provides this new narrative and is essential reading to anyone interested in the fate of wild fish stocks.

‘The Loch Maree Hotel catches (as in any wild fishery) were always subject to peaks and troughs…..

Until then (1987), the annual catches show no obvious trend and those made in the 1980s were consistent with the earlier fluctuations since the beginning of the series (1969 and not 1952 which was when records were first collected). After 1987, the catches dropped to unprecedented levels and did not recover.’

Dr Walker went on to say that ‘It is pertinent therefore to add, without further comment at this stage, that two salmon farming units of cages were established in Loch Ewe in 1987, sited 4 and 7 km from the river mouth, operating to consented biomass limits of 919 and 950 tonnes. Other than these sites, the nearest active marine salmon farms to the river mouth were and are 40 km by sea to the north in Little Loch Broom and 55 km to the south in Loch Torridon.’

In April 1987, which was before the salmon farms in Loch Ewe were up and running, the Scottish columnist in ‘Trout & Salmon’ magazine wrote: ‘Sea trout are a bit of a problem these days in some parts of Scotland. The question is what’s happening to them? Take Loch Maree, for instance, where these past few years, there has been a rapid and progressive decline in stocks. The loch was the premier sea trout fishery in Scotland, if not the UK until the end of the ‘60s when there was a sudden end to the prolific catches as disease took its drastic toll. There were signs of recovery at the end of the ‘70s but now the most important beats have had to report their worst ever season in 1986. What’s the reason?’

Clearly, the reason wasn’t salmon farming. As Dr Walker points out, the nearest farms to Loch Ewe and Loch Maree were located over 40 km away. Despite Dr Walker’s analysis, the wild fish sector had acknowledged that the Loch Ewe system including Loch Maree was in trouble long before salmon farming arrived in the area.

It has been easy to confuse the issues through the mists of time, which is why this new book is such an important addition to the debate about wild salmon and sea trout stocks. The book is available through amazon at   https://www.amazon.co.uk/Loch-Marees-Missing-Sea-Trout/dp/199997140X/ref=sr_1_1?ie=UTF8&qid=1518469056&sr=8-1&keywords=loch+marees+missing+sea+trout

For sale: During the Scottish Parliament’s ECCLR evidence session, which took place on February 6th, John Aitchison of the Friends of the Sound of Jura told the committee about closed containment farming in which he said: ‘ There is a trial at Machrihanish being run by a Norwegian company doing exactly what we are talking about on land, which I think, has concluded successfully, but there is almost no information about it.’

This was rather surprising since it is only about 50 miles from the area around the Sound of Jura to Machrihanish. We would have expected the Friends of the Sound of Jura, being as passionate as they are about closed containment to have made the short trip to visit the farm to see what was going on for themselves, especially as Mr Aitchison told the committee that the trial had been concluded successfully. However, as those of us who had made the effort to find out the outcome of the trial already knew, it had ended with a total fish kill. It has been said that this was the result of some detergent getting into the system, but we are not convinced. Farmers are very wary of any such product being kept near the fish. We will probably never know exactly what happened to cause this complete wipe out of the trial fish.

What is more relevant is that the according to Fish Farming Expert, this closed containment farm was put up for sale on the day before Mr Aitchison spoke at the committee meeting. Seemingly, the Norwegian company (Niri) has decided that they have done enough to prove the technology, so they have announced their intention to sell the facility.  They have said that they do not wish to become a farming company and instead they wish to become a leading producer of land-based seafood. To this end, they had previously announced the intention to establish a 15,000-tonne farm in Norway. It seems that Niri don’t know whether they want to be farmers or not, just that they want to sell their Scottish interests. This is now a major opportunity for someone.

In fact, there are so many proponents of land based closed containment farming in Scotland, Niri shouldn’t have any difficulty making a sale. We would suggest that this is an ideal opportunity for people like the Friends of the Sound of Jura, Salmon & Trout Conservation, Scottish Salmon Think Tank, GAIAA and many more to club together and establish a demonstration farm to show the salmon farming industry how it can be done. After all, these are the people who totally believe in closed containment so should be willing to put their money where their mouths are. Or could it be they just expect farming companies to invest in this unproven technology.

Correction: Salmon and Trout Conservation Scotland want it to be known that their submission to the ECCLR Committee was four pages long, but the Committee amended the first appearance of the initialised use of their name to spell it out in full. This changed the format pushing the text into a fifth page.

Now that they have got in touch with us directly, perhaps they would like to arrange to meet to discuss the real issues. They have so far appeared extremely reluctant to do so. Perhaps, they should just read the book.

Consumers must pay: iLAKS reports that a Norwegian Seafood Council analyst has said that consumers are benefitting from lower salmon prices in stores as the impact of falling prices hits the marketplace. However, we at Callander McDowell think that it is a little soon to make such a judgement. This is because supermarket chains will wait for lower prices to be firmly established before permanently reducing prices on the shelf. There can be a significant time lag before consumers will see a change in the price they pay. This is because as late as the first week in February, one UK supermarket had actually increased, not decreased, prices across their whole salmon range. Just because prices at farm gate are going down doesn’t always translate into lower prices for consumers. Even price promotions, which have been almost a permanent feature of UK salmon sales are now hard to find. The reason for the reluctance to react to market prices is understandable. Stores may go to the trouble of repricing their whole range only to find that market prices suddenly reverse. Shoppers like stability of prices and stores will hold off for as long as possible before deciding to instigate any change.

iLAKS report that salmon exports from Norway have increased by 16,000 tonnes in January, prompted by a decrease in prices from NOK 72 to NOK 57/kg. However, 16,000 tonnes spread across the global market place is still a relatively small increase.

iLAKS also report that French supermarkets have cut prices, but we suspect that the reduction in the average price down to €17.9/kg may be due to special promotions rather than across the board price cuts. Certainly, in the run up to Christmas, there was little evidence of any price cutting in French supermarkets and most prices remained high. Any observed changes now have yet to be sustained throughout the first half of the year. Easter is early this year and will provide a better indication in which direction the consumer market is headed.

Promotions: iLAKS report that by the end of December, the proportion of French supermarkets running campaigns on salmon had jumped to its highest level for two years by around 20%. Any campaigns in the UK certainly tailed off in the New Year. There have been some promotional discounts since but generally, the consumer market has been quiet.

However, we have come across evidence of a different promotional campaign in this country. We recently discussed one of the presentations from the Norwegian Seafood Council meeting in London, where the ‘Great British Chefs’ related how they specifically targeted the foodie end of the market, focusing on origin and quality. We should have not been surprised to see a full-page advert promoting salmon in a magazine with the title ‘Foodism’.

As its name implies, the magazine is devoted to foodie culture, but focussed in London. It features London restaurants, producers and specialist food outlets. It is given away free in selected outlets but probably the fact that it has a limited readership and is therefore not so attractive to advertisers, its availability has been expanded across the country with it stocked in mainstream supermarkets. The January issue included a full-page advert for Norwegian salmon. 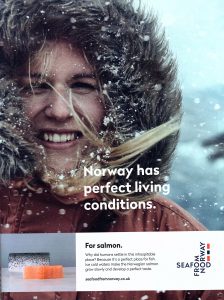 The puzzle about this advert is that whilst it promotes Norwegian salmon in a British magazine, there isn’t any branded Norwegian salmon in the UK. Packs in some supermarkets may state in small print on the label that the salmon is ‘Farmed in Norway’, but this could be listed on the back of the pack or alternatively on the front. It might equally state ‘Farmed in Scotland’ or packs of both origins could even be mixed on the same shelf. What there isn’t, is any pack stating, ‘Norwegian Salmon’ in the same way as a brand. It is largely anonymous.

This is not surprising, because whilst imports of Norwegian salmon into the UK have increased, it is not because of its Norwegian origin. It’s being shipped in because local producers cannot produce enough fish to meet their export aspirations and still supply local demand. Norwegian salmon simply fills the gap. Promoting salmon in the UK because it is Norwegian is a costly but futile exercise. Consumers buy salmon because it is tasty and meets their expectation, but rarely because of its origin.