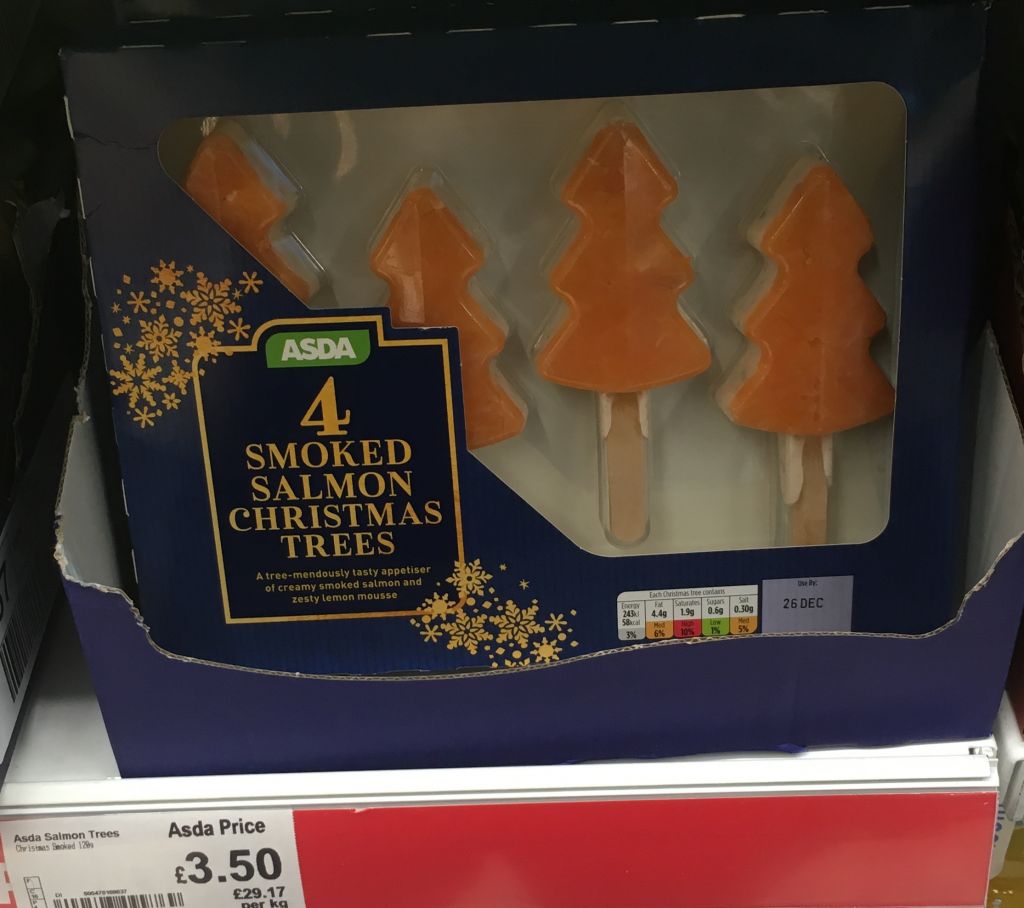 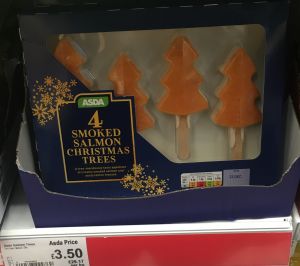 However, it wasn’t just the delayed start to Christmas salmon, there were also fewer products available. The fancy baubles and pearls were no-where to be seen. It was certainly a more parsimonious Christmas when it came to salmon. It was also as if stores didn’t want to take the risk. In fact, one chain of smaller stores didn’t bother with Christmas salmon at all preferring to rely only on its standard range of smoked salmon for Christmas sales.

The writing was on the wall as Intrafish had reported earlier in December that volumes of fish and seafood, particularly salmon had fallen in the 52 weeks to the beginning of November. Consumers had shied away from higher salmon prices, even though salmon continues to be the most popular species in the UK. Nielsen market research reported that sales value for salmon had increased t £905 million, up 3.9% but the volumes has fallen by nearly 10% to 52,486 tonnes. Prices have increased by 15% per kilo over the year. Reduced consumer interest has been noticeable in recent months with much less salmon on the shelves.

We therefore expected that Christmas might not be the greatest bundle of joy this year. We were not wrong. When we first started sending out reLAKSation we always started the year with a comparison of whole fish prices offered by UK stores over Christmas. We won’t be doing so this year because whole fish was no longer on offer in all UK stores. We can say that the best deal on whole fish was £5/kg and the best deal on a large salmon fillet/ salmon side was £10/kg, but fresh salmon was not widely promoted this year.

Most stores did have an offer on smoked salmon and the best deal was £10.83/kg but apparently this was a mistake. Although the store concerned had gone to the effort of producing preprinted labels, they were only on the shelves for a day before someone must have questioned the price and the store returned the labelling back to the former price of £21.66/kg. Otherwise the best price was £17.50/kg although interestingly, during this first week of 2018, one store is offering smoked salmon at £16.70/kg, whilst another store has fresh fillet at £12.82/kg!

Christmas product of 2017: Our favourite product over Christmas this year was not the most complex. There have been the dressed sides, the mousses and the verrines that appear most years, but we very much liked Asda’s smoked salmon Christmas trees, which they describe as: 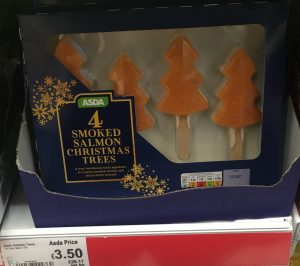 We know that there were plenty of other products made using mousse and smoked salmon, but we liked this above everything else simply because it was clearly a Christmassy product and not something that could be churned out for other holidays such as Easter or Valentines Day.

Over the years, we have rarely seen Christmas products that look as if they have been specially been made for Christmas and we think it is a pity, Unfortunately, as salmon spot prices have increased, salmon has become too expensive to process and consequently, the consumer has had less and less choice. This year, a simple smoked salmon and mousse Christmas tree has reassured us that the salmon farming industry it is not all about salmon prices and there can still be both processing magic and humour at least once in a year.

A taste of royalty: Within the standard range of salmon products to hit the stores this Christmas, was another new product, this time from Sainsbury’s. Under their ‘Taste the Difference’ brand, Sainsbury’s launched their ‘Salmon & Egg Royale’. This consisted of flakes of honey roast salmon with a poached egg, blinis and a hollandaise sauce in an individual wood effect tray. The sauce comes in a separate sachet and is added to the dish to be warmed in an oven for 10 minutes.

The novelty of the dish is the poached egg, which when cut open has a runny yolk. It’s sort of a version of eggs and smoked salmon but given a lift with the honey smoke and the hollandaise.  The pack says that the dish is the ultimate lazy luxury Christmas brunch. We are not sure that we would go so far as that, but we found it to be tasty with a mix of textures. The egg wasn’t quite as good as if it had been freshly made but, it certainly worked as a complete late morning treat. 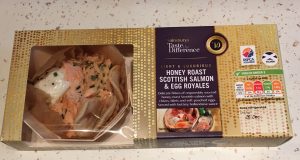 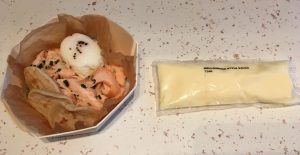 Here we go again: The on-line edition of the Herald newspaper this week carried on from last year with attacks on the salmon farming industry. This time the RSPCA has been attacked for its new standards relating to the shooting of seals in which seals can only be killed as a last resort.

The Herald says that the Global Alliance Against Industrial Aquaculture campaign group has condemned the continuation of the ‘shoot to kill policy’. The newspaper quotes Don Staniford, who they describe as being ‘from the group’. It seems that the campaign against salmon farming is to continue into 2018.

Sadly, like much of the negative campaigning against salmon farming, those reading the story will be misled. The article is accompanied with graphic phots of dead seals and a video of a marksman shooting a seal from a cliff top. The pictures are accompanied by an explanation of where the shooting occurred but what is not mentioned is that one of the locations is about 70 miles from the nearest salmon farm whilst the other is over two hundred miles away. These graphic images simply had nothing to do with salmon farming. The problem is that the newspaper not only misleads the public, but also fails to challenge their source over the facts. There is a tendency to quote figures covering a period of several years to give the impression that the industry is too readily pulling the trigger. There is also no attempt to clarify that other interest groups have killed more seals than salmon farmers ever have. The seals are actually irrelevant to this news story. This is simply about smearing the salmon farming industry.

No one likes to see any seal killed but sometimes, there is no choice. In order to live, humans have to affect nature.  For example, there is little public outcry over the slaughter of over 20,000 badgers in order to protect milk production. There is actually little public outcry about killing seals. It is just a handful of so-called serial objectors who appear determined to cause mischief for salmon farmers. Of these handful, Don Staniford stands out because he appears to be the only full-time activist. Unfortunately, the journalists who are happy to use stories that have been handed to them on a plate, never question the source. So, whilst salmon farmers are reviled for not being transparent, there is no transparency about their accusers.

There is no information about the Global Alliance Against Industrial Aquaculture, other than it is a name used by Don Staniford to front his campaigns. There is no information about their base, their membership or how they are funded or more importantly, who funds them/him. Equally, we have no idea as to the motivation as to why salmon farming, and nothing else is portrayed as the devil incarnate.

Such questions spring to mind following a news story in another Scottish newspaper – The National. This concerns the ongoing debate about whether Scotland could become independent from the rest of the UK. It seems that an anti-independence group – ‘Scotland in Union’ has boasted of dominating the letters’ page in Scotland’s press. They have had over 5,000 letters published in the ‘Letters to the Editor’ pages in the Scottish press over a period of three years. The group coordinated a cabal of at least 12 people who wrote letters attacking independence and the Scottish National Party. By October 2017, the group had 1985 letters published compared to 1929 in 2016. A leaked email warned people about advertising the existence of the group.

However, the group was thrown into crisis when another anonymous email revealed details of private donors and potential donors to the campaign. The list includes many of the UK’s wealthy elite with major landowners, aristocrats and EEO’s of companies all listed. Featured are Earls, Lords, Viscounts, Colonels, Majors and Sirs and many names are followed by ‘Esq’ or preceded by ‘Hon’. Scotland in Union claims to be grassroots group, which was setup in 2014 after the independence referendum to campaign against a second vote on independence.

The significance of this story is how groups of influential people can manipulate pubic opinion. Could the same thing be happening with regard to the salmon industry? It wouldn’t be the first time. It wasn’t that long ago that Vivian Krause from Canada exposed the US charitable foundations for paying environmental groups millions of dollars to spread stories about how farmed salmon was bad for human health and the environment. Their aim was to protect the market for US wild salmon from competition from imported farmed salmon.

Until Mr Staniford is transparent about his funding, there will always be a suspicion that vested interests are trying to manipulate opinion against the salmon farming industry.

Meanwhile, if Mr Staniford is so concerned about the welfare of seals, we suggest that farms suffering from a rogue seal should call him and ask him to remove it to a safer haven.

Top fund: Bloomberg Markets has reported that Norway’s top performing fund has delivered a return of 25% this year. Nordea Norge Pluss outperformed all other funds during 2017.

The secret of its success is that the management decided not to invest in stocks of salmon companies. Their portfolio manager described the salmon stocks as having earnings estimates that are too high. He said that they have been cautious about the whole of the salmon sector preferring to invest in the oil service industry.

Whilst fish farmers had a stellar 2016, with the Oslo Seafood Index surging 56%, it struggled in 2017 with a 4.8% decline. Jon Hille-Walle from the find said that the salmon industry is facing challenges to higher production from lice and diseases. He added that it is difficult for farmers to grow production. It is asymmetric as there is always a downside. It is easy for things to go wrong and currently the cost side is going in the wrong direction.

We, at Callander McDowell, agree with Mr Hille-Walle. Salmon farming can be too unpredictable for the stock exchange. In addition, the relationship between production and stocks is too simplistic, which is fine if the intention is to make a quick buck but does not allow for long term development. This is why Christmas salmon is no longer what it used to be. Stocks and shares rise if salmon prices rise and vice versa. The stock exchange hopes for high prices, but high prices depress the market and prevent development of the sort of added value products that consumers now want.

This makes a difficult choice for farmers. Is it more important to satisfy consumers or their shareholders? The managers of Nordea Norge Plus fund see that makes for an unreliable investment.