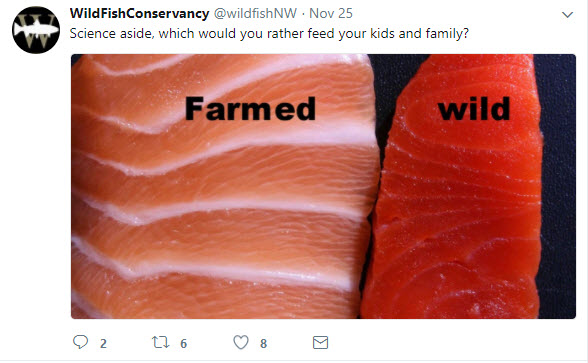 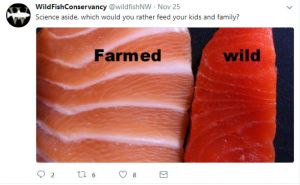 Announced on Twitter: At the end of the week Seafish announced through Twitter that they have published details of their ‘ambitious plan towards creating a sustainable and thriving future for the seafood sector in England’. The Strategic Plan 2040 is available at http://www.seafish.org/media/publications/SEAFOOD_2040_lo_singlep.pdf and is such a comprehensive document that it requires proper consideration before we feel able to comment. We will discuss their conclusions in a future issue of reLAKSation.  Keep watch in the next week or two.

Wild about Twitter: Twitter has been in the news recently following the retweets by the President of the United States. The suggestion is that the claims he made about the videos he retweeted were not true. It now seems that Twitter is a ready platform for making claims that are totally unsupported.

Whilst, we would not suggest that this can be compared to Trump’s tweets, an image posted by the Wild Fish Conservancy caught our eye. The Wild Fish Conservancy state that they are a science and research conservation non-profit dedicated to the preservation, protection and restoration of wild fish eco-systems in the Pacific North West.  The tweet reads, science aside, which would you rather feed to your kids and family? And is accompanied by an image of two types of salmon; one labelled farmed and the other wild. The flesh of the two is very different. The farmed is much paler and is striped with bands of white. The wild fish is deep red colour. 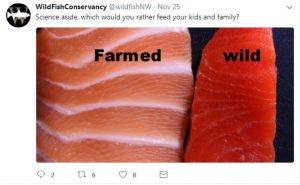 To the uninitiated, the two fish look very different and there is a good reason why. They are different. However, opponents of salmon farming readily compare the two when all they share is the name salmon. The impression given is that the wild fish is preferred yet the reality is very different. By coincidence, we have just returned from the US Pacific Coast and took the opportunity to look at the salmon available as well to eat it.

By November, the fishing season for wild Pacific salmon is well over. This does not stop stores and restaurants selling these fish.  However, the overall impression gleaned was that it is easier to buy chilled wild Pacific salmon in British supermarkets than it is on the west coast. Instead, farmed salmon was everywhere, which is indicative that it is popular amongst US consumers. All the salmon served in restaurants visited was farmed Atlantic. Most menus simply state salmon, although one did list Skuna Bay salmon from Canada. Those restaurants serving wild salmon, followed the example of the Wild Salmon Conservancy, listing it as just wild salmon and failing to identify the species of Pacific salmon.

By comparison, some of the stores are extremely transparent about the origin of the fish they sell. Loch Duart salmon from Scotland and Norwegian salmon from Kvarøy were clearly identifiable. It seems that US west coast consumers do have a preference for farmed Atlantic salmon despite the claims made by the vocal minority.

It does appear strange that the Wild Fish Conservancy have suggested that consumers should opt to buy wild salmon rather than farmed because their declared aim is to preserve and protect wild salmon so why would they want stocks to be depleted by hungry consumers?

Secret Twitter: The beauty of Twitter is that it allows users to say things without having to face those who they accuse. We, at Callander McDowell, have been subject to such accusations, which have led us to conclude that attempting to defend the salmon industry can be better done by other means.

Critics of the salmon farming industry cannot understand why those involved in salmon farming are ready to counter accusations made against the industry, especially when they are factually wrong. We recently responded to some comment made on Twitter and were accused of responding because we are being paid to say so, which is untrue. We respond to comments because we are unable to stand by when inaccurate information is being touted as fact.

In response, the critic who claims to be a wild fish campaigner tweeted that if the industry is not our paymaster, then was our visit to one salmon farming company head office on the afternoon of Friday 13th October just a social call?

As it happens, our Dr Jaffa was in the locality on Friday morning having travelled to Scotland to meet a friend visiting from overseas the night before. However, he was on the 10.41am train south, having not met anyone, let alone from the salmon farming industry, before boarding the train. When this information was passed on, the response was ‘any answer is irrelevant as he was at the head office on that date’. The truth is that he wasn’t, but even if he was then so what? We are happy to openly defend the salmon industry. We don’t need to be paid to do so. The reality is that like most of the facts about salmon farming, these critics don’t want to hear the truth as it doesn’t support their case.

Instead, this critic responded by saying Martin must have a double as face recognition technology from CCTV is marvellous stuff. Clearly, if this industry critic has CCTV images of Martin then we would like to see them. In response to our request to see this evidence this critic responded:

Twitter makes it easy to try to undermine the salmon industry (or anything else). It is all too simple to churn out inaccurate information from behind a computer screen or mobile phone but when challenged, they don’t appear to have the evidence to support their claims.

Not just Twitter: Over recent months, the vocal minority have sparked a run of articles in the mainstream press about the negative impacts of salmon farming. The overall impression that could be gleaned from these articles is that salmon farming is one of the worst polluters in the UK being responsible for fish waste (don’t all fish defecate in the sea), sea lice (a natural parasite) and worse, allowing live fish to escape into the sea! One of the papers allowing their pages to be used to promote a campaign against salmon farming has been the Herald and its sister paper, the Sunday Herald.

The negative revelation leads with a question to the Norwegian Minister asking him whether he is a true patriot? (https://morgenbladet.no/ideer/2017/11/fisk-ratner-fra-hodet-og-ned). The suggestion is that by supporting the salmon farming industry, Mr Sandberg is not a true Norwegian.

This unbelievable nonsense demonstrates how desperate the vocal minority has become. After all, this is just about farming a fish, not initiating world war three.