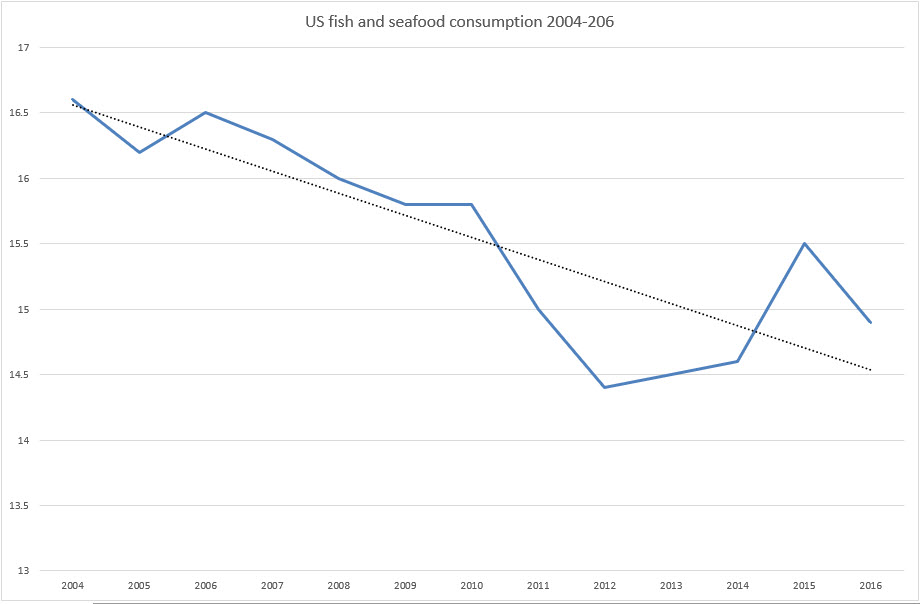 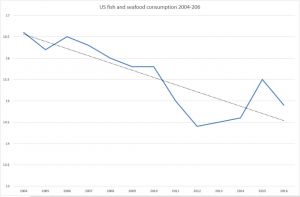 Closed (down): Fishupdate.com report, after some rumours and speculation, the Norwegian company NIRI have confirmed the loss of all the fish at their closed containment salmon farm at Machrihanish on Scotland’s west coast.  It was only a short time ago that NIRI’s Arve Gravdal recently featured on a BBC Radio 4 programme about farms of the future http://www.bbc.co.uk/programmes/b099yh86#play. He told presenter Tom Heap that closed containment meant -no parasites, no disease and no escapes and now it seems no fish too. Interestingly, when Tom Heap interviewed Arve Gravdal at Machrihanish, he never mentioned having seen the fish. Maybe there was nothing to see.

When Mr Gravdal spoke to Fishupdate.com, he tried to put a positive spin on the loss saying that NIRI had met the milestones on the project, but he agreed that it was a disaster for the pilot farm. He blames the loss of the fish on chemicals that got in the recirculation system during the repair of the main water inlet.

Mr Gravdal says that he has new investors who had seen the ‘very nice’ NIRI fish and have decide to invest in Norway despite what happened in Scotland.

iLAKS reported in August that the land based farm OFS Andenes is being established in Norway with backing from AH Holdings. The plan is to build a farm capable of producing 15,000 tonnes a year. AH Holdings has bought 8% of NIRI as they believe that NIRI offer the best technology for disease free and cheap salmon. However, the picture is complicated because Intrafish reported in October that Arve Gravdal had left the board of NIRI AS. No reason was given. Could it be that his departure from NIRI had something to do with the closure of the farm in Scotland or was that just a coincidence?

Critics of net pen salmon farming have been very free with the idea that closed containment is the way forward for salmon farming even though as yet, no large scale closed containment farm has been shown to be profitable over an extended period. iLAKS just reported that Danish Salmon have declared a positive EBITDA but the question is whether they can maintain this over months and years. So far, the company has encountered a number of problems. Thee s no guarantee, that everything has been resolved.

By coincidence, a letter from Taste of BC Aquafarms has been published in the Nanaimo News Bulletin in British Columbia. The company were responding to letters claiming that salmon farms negatively impact on the environment, which they say contain falsehoods and inaccuracies.

Taste of BC Aquafarms is a small producer of Steelhead salmon from a recirculation farm. They say that there is a common perception that the technology currently exists to take salmon farms out of the ocean and move them on to land, but the reality is very different.

The letter was picked up by Business Vancouver, which also discusses the fate of the Kuterra Farm which we have discussed several times previously.  The farm was established in 2013 but is now up for sale and has so far being unable to attract any buyers. The farm was build using grants and cheap loans but such finance disguises whether such farms can be profitable.

We have always said that if industry critics are so convinced by land based closed containment salmon farming, then they should build a farm to demonstrate to the existing salmon industry that closed containment not only works but is also profitable. As Business Vancouver point out, it’s easy to spend other people’s money for them.

As Taste of BC Aquafarms suggest, most of the critic levelled at net pen salmon farming is based on falsehoods and inaccuracies. Surely, the truth should be established before farming companies rush to appease such criticism with more yet unproven land farms.

Seafood Source report that the National Fisheries Institute remains upbeat claiming that the overall trend is showing that consumers are eating more fish. In 2013, total consumption was 14.5 lb, rising to 14.6 lb the following year. Consumption increased further in 2015 to 15.5lb but that increase was attributed to an unusually high salmon harvest that year.

However, whilst NFI remain positive, it does seem that over a longer term, fish and seafood consumption continues to be in decline. 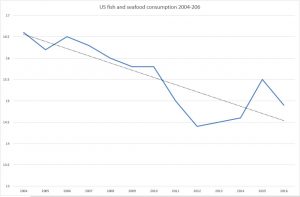 If consumption in 2005 is compared to that in 2016, there are some clear changes

The only species to show an increase are tilapia and Catfish/Pangasius, which without any supporting data would suggest an increase in ethnic consumption. Everything else other than shrimp is in decline.

Meanwhile, Kyst.no report that home consumption of salmon has risen despite being 16% more expensive compared to last year. However, it seems that positive change relates to just August, so it may be too soon to judge whether Germany is reversing trends found elsewhere. It is possible that salmon sales were heavily promoted that month, boosting sales, but this is just supposition. We will have to wait for more data to see what is really happening.

Free lunch: It is said that there is nothing like a free lunch suggesting that it is impossible to get something for nothing, yet last month, it was possible to get a free lunch in Manchester. The Manchester Evening News suggested that soggy sandwiches should be put away and that the public should head to central Manchester for a free portion of fish and chips.

According to the Manchester Evening News, Seafish, who help to organise the awards, said that the fish and chip shop is a national institution which has led to the British public having a love affair with fish and chips for well over a century. They say that not much compares to white fish coated in crisp batter showered in salt and vinegar and eaten out of paper wrapping with a wooden fork. The offer of free fish and chips is to mark the milestone year of the National Fish and Chip Awards and to remind people why British fish and chips are, and always will be, the best in the world.

Herring about Food: BBC News website reports from Northern Norway near the island of Kvaløya not far from Tromsø where video of Orcas was filmed for the new BBC TV series Blue Planet 2. The BBC say it was one of those television moments where killer whales were filmed herding shoals of herring into tighter and tighter balls near the surface. The whales then stunned their prey by slapping their tails.

The BBC say that the long narrow fjords near Tromsø are one of the few places in Europe where it is, still possible to see these magnificent animals. Elsewhere, there are only eight killer whales in the NW Scotland – Ireland population and thirty-six around Gibraltar. This is why scientists and tourists are flocking to Kvaløya Island aptly translates into Whale Island.

Marcus Åhlund, a local guide lives on the island. He said that the island is so named because whales were always found nearby but then about 70 years ago, the whales disappeared until about five years ago. Scientists and locals were puzzled when the whales started to return.  It didn’t make any sense but Fredrik Broms, a local marine biologist says the answer is simple. The whales are following their food – the large shoals of herring that have moved further north.

We, at Callander McDowell, can certainly attest to the Orcas presence as during a trip earlier this year to speak at a regional conference, we went out to see the whales and were treated to a spectacular sight of about twenty orcas and eight humpback whales chasing the herring.

The return of the whales to northern Norway in pursuit of the herring puts to mind that other species must be affected by changes to location of their food. Salmon are likely to be particularly affected but perhaps unlike the whales, they may be unable to identify where their food has gone. Could this be the reason why salmon stocks are so threatened?

Pilchards: The Guardian newspaper recommends that British consumers forget cod and salmon and rediscover the humble Cornish sardine. Currently, about 90% of the catch is exported to France, Spain and Portugal. Ironically, some of the catch to Portugal and Spain is consumed by Britons on holiday, who don’t realise that the fish are actually caught from British waters. Yet, whilst happy to eat the fish during their holidays, most Britons wouldn’t give the fish a second thought once they return home.

The Guardian report that Sainsbury’s supermarket is launching a campaign to get shoppers to eat sustainably caught healthy – rich in omega-3 – species caught from around Britain. Sainsbury’s say that Cornish sardines are one of the country’s great sustainable fish choices that deserve more celebration.  The fish already has protected geographic status. Sainsbury’s now hope to push the fish into the premier league of British fish. Currently 80% of the fish bought by British consumers is one of the big five species – cod, haddock, tuna, salmon and prawns. Sainsbury’s hope that a coming sardine revolution will change all that. We are not sure about a revolution, but we hope that consumers can be persuaded to eat more sardines and more importantly, more fish.

Sardines have a long way to go as they are currently number 15 in the list of Seafish top species as compiled by Nielsen. Since reading the Guardian, we have been specifically looking at sardines in Sainsbury’s stores, both chilled and on the counter, and believe that the store will have to take radical action if they want to boost sales. The fish are largely invisible in store and need a major boost if consumers are to be persuaded to buy them.

We have yet to see what promotional activity Sainsbury’s will take but we hope that they will not use the same message as appeared in the Guardian. The paper reports that the fish are wild not farmed. Guardian readers are also told to forget salmon and cod and buy sardines. We would argue that these negative messages will do more to undermine fish consumption that boost it. Sardines are not a replacement for cod and salmon. They should be a complement to these great species. Unfortunately, British consumers are very conservative in their taste and they do like to buy the Big Five. We have previously seen promotions to persuade consumers to move away from the Big Five and they have failed. We would argue that fish consumption is already in decline. Presenting the wrong message can easily deter consumers from buying fish at all.

The same applies to pushing the fish as wild and not farmed. This might be seen as actively promoting wild fish, but all it does it make consumers question about the fish and if there is uncertainty, then consumers just stop buying any fish as they are unable to differentiate between whether the fish is farmed or wild.

We have always believed that the way to promote fish is through the joy of eating any fish. We don’t think that there is a problem if consumers only want to eat one species. At least they are eating fish and that alone is to be welcomed.

We shall be continuing to monitor the Cornish sardine. It would be pleasing for Cornish sardines to become more popular in the UK, but we have yet to be convinced.