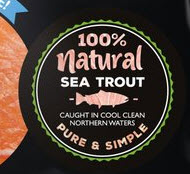 V.APpy: Intrafish report that Marine Harvest’s Consumer Products division has posted a seasonally record high profit for the second quarter of the year turning around a loss from last year. Given the high price of salmon, this is a definite achievement but one which will probably go unnoticed by much of the industry.

We, at Callander McDowell, have always been advocates of a salmon industry with a strong integrated VAP element. However, this current time of unusually high prices makes VAP a much less attractive proposition so Marine Harvest have done well to turn around the business to profitability. VAP will certainly come into its own if and when prices ever fall as it offers the opportunity to boost margins. Unfortunately, with the current emphasis on the stock market and share prices. Salmon business seem to be taking a short-term view, which excludes VAP so Marine Harvest should be applauded for continuing to have faith in this aspect of the business.

This particular business has a long and varied history. Unusually, it did not begin with a farming company recognising the need to build on VAP but rather the opposite. A Belgian processor based in Bruges saw that salmon farming could offer a regular supply of salmon with predictable quality and predictable price. Gilbert Pieters had vision and bought salmon farms in the Scottish Outer Hebrides. This may not have been the best location for a processing operation in Belgium but Gilbert persisted and had enough success to attract the attention of a major Norwegian farming company. Fjord Seafood eventually bought out the business and Fjord Seafood were then acquired by Pan Fish, which subsequently evolved into Marine Harvest.

The consumer market for fish is changing and those companies that will do best in the years to come will be those like Marine Harvest who have the foresight to diversify, offering consumers a range of varied products rather than focus on raw salmon flesh.

Consuming issues: Seafood News.com report that Cargill, a global corporate feed company that produces feed for salmon, tilapia and shrimp has conducted a survey of 1,000 US residents to find out what they care about when it comes to seafood. Cargill say that 82% of Americans add salmon, tilapia and shrimp to their lunch and dinner plates, with seafood in higher demand than ever before.

Certainly, the last list of the top ten consumed fish and seafood species issued by the National Fisheries Institute in October 2016 showed that fish consumption in the US had increased from 14.6lb per head to 15.5lb. This positive news is however weakened by the fact that ten years previously, consumed peaked at 16.6 lb per head up 0.3 lb from the previous year.

Whilst recognition of the Marine Stewardship Council and its logo isn’t quite the same as the questions asked by Feed4Thought, they do give an idea of the views elsewhere. The MSC say that awareness of their sustainability logo is about 37% amongst all consumers. Just over half of consumers surveyed by the MSC said that they would be willing to pay more for certified sustainable seafood. Awareness is higher in older rather than younger age groups.

The MSC survey 16,000 consumers in 21 different countries, who have been subjected to varying amounts of exposure. In the US, there was almost no awareness of the MSC and we suspect that this is reflected in general awareness of these issues.

Finally, in European markets where the MSC have been more active, there is very little evidence to suggest that consumers are willing to dig deeper into their pockets to buy sustainable/responsible fish and seafood. Of much more importance to these consumers is how the fish and seafood looks and how much it costs.

It’s not what you see:  Intrafish have conducted one of their periodic tastings testing Big Fish brand salmon with garden mint. This is a frozen product from JSC Fish of Grimsby. We will leave the tasting to the Intrafish team but we were interested to read their comments about the labelling. They expressed concern about the wording on the front of the pack. It may not stand out because the pack is very busy but it does include the wording ‘100% Natural Atlantic Salmon caught in cool clean northern waters’. Intrafish say that this could be misleading although the pack of the pack does state that the salmon is an aquaculture product farmed in the northeast Atlantic either in Scotland, Faeroe Norway or Ireland.

Big Fish were in the news earlier this month because they won a Great Taste award for their trout product. This product is labelled as sea trout although Intrafish say that it comes from a strain of farmed rainbow trout that is slow grown at sea and that it is an alternative to farmed Atlantic salmon. According to Intrafish, the product was launched just a year ago.

We, at Callander McDowell, were first aware of this product shortly after its launch and we expressed our concern that the way this product is promoted is misleading. It is one thing to imply that farmed salmon is caught from the cool waters of the north but it is a completely different proposition to call a fish by a name that is widely accepted as a completely different fish. Sea trout is the sea running form of the brown trout. It does appear on restaurant menus and is sold through fishmongers, albeit in very small volumes. The fish which appear in the Big Fish pack are rainbow trout that are grown at sea. They are not sea trout but trout grown at sea. The pack does state that the fish are the produce of aquaculture – the front of the pack does state that the fish are caught from the cool clean northern waters – and that they are farmed in Scotland, Shetland, Faeroe and Norway. The pack also gives the Latin name of the fish but how many consumers would know that this relates to rainbow trout and not the traditional UK sea trout.

However, it is not just these packs that have adopted this new trend of calling sea grown rainbow trout by the name sea trout. We have seen quite a number of restaurant menus now offering sea trout to their customers. We think it is highly unlikely that these fish are true sea trout but rather large rainbows.

We have regularly stated that we have not come across many attempts to confuse consumers but we think that this is a prime example and one that the industry should remedy.

If the fish is farmed then words like ‘caught from’ should not be used nor should names that could imply that the fish are something they are not. 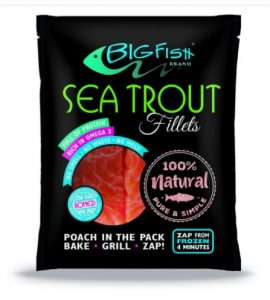