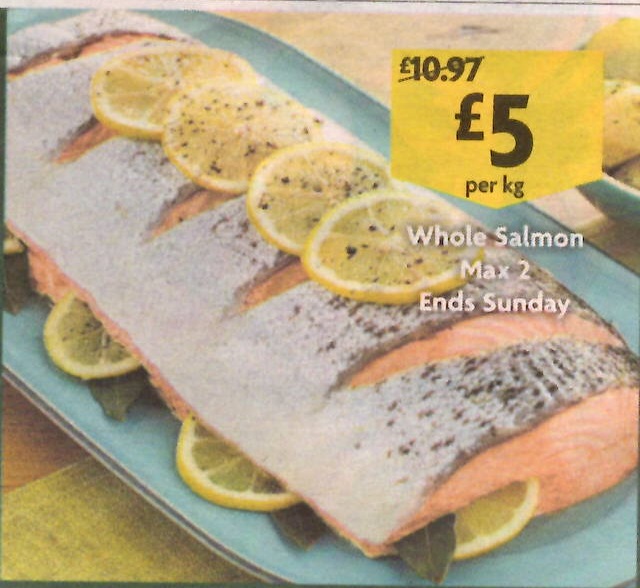 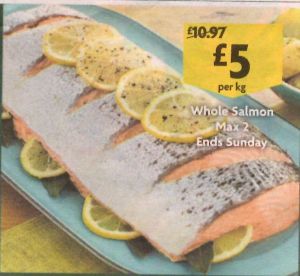 Two priced: iLAKS reports that Easter will be characterised by a two-price scenario with prices going up before Easter and then falling after. This is because the week before Easter is a short week and harvesting will be curtailed limiting supplies but then after the holiday, harvests will increase bringing more fish to an increasingly competitive market.

This two-layered pricing is not limited to the spot market. Retail has also adopted a similar strategy this Easter, although only just.

As regular readers of reLAKSation will know, every year we conduct a trawl round the Easter salmon offerings in both the UK and France. In recent years, this has become ever more depressing as salmon becomes increasingly less prominent in Easter promotions due to high prices. This Easter was no different. In fact, if anything it was worse.

This year French smokers appear to have given up on Easter. No doubt, they decided that the high cost of salmon and the cost of promotional packaging made Easter smoked salmon commercially unviable. We only saw one example of large pack smoked salmon but it was without any special promotion. French consumers wanting smoked salmon were left with the choice of small standard packs.

Fresh salmon in France was not much different with prices at unprecedented high levels, which was probably why there was not much in evidence. However, whilst most salmon was expensive, we did uncover a couple of low key promotions. This year, we did manage to find whole salmon at €7.50/kg and fillet at €15.99/kg, but these were the exceptions not the norm.

By comparison, the UK offered consumers a much better deal with most stores offering some form of promotion. However, like France, offers on smoked salmon were few and far between. In fact, the only deal appeared in the days before the holiday with a third off a larger pack down to under £27/kg.

The main deals were on salmon from fish counters with the best deal being whole salmon for £5/kg and £11.50/kg for fillet bought as a whole side.

Easter used to be a high point in salmon sales but high prices have taken their toll and salmon has now lost much of it holiday luster.

For us, at Callander McDowell, Easter was best summed up by our observations in one major retail store. Whilst offering discounts on two or three salmon products, the store decided the time had come this week to put up prices across the whole of their salmon range. It’s no wonder that the best deals to be found this Easter are on chocolate Easter eggs!

Seen to be green: According to Intrafish, the Green Group, Salmon and Trout Conservation have declared that Scotland is the ‘dirty man’ of global aquaculture after reading the latest annual report from the salmon farming company Marine Harvest.

S&TC say that the report shows that Marine Harvest’s performance of sea lice control in Scotland is ‘drastically’ worse than in any of its other worldwide operations.  This is because 69% of its sites were above the trigger level for sea lice treatment in 2016. They say the ‘The situation in Scotland compared to other countries is truly shocking and a damning indictment of the Scottish Government’s failure to regulate salmon farming effectively. This is incontrovertible proof that Scotland really is the dirty man of global aquaculture.’

However, we at Conservation McDowell, think that far from being incontrovertible proof, the S&TC are reading far too much in to the company report.

Firstly, we should point out that there is a big difference between having to treat a site for sea lice and claiming that Scotland is a ‘dirty man’. In addition, global aquaculture is much more than farming salmon. S&TC are just getting a little carried away in the claims they have made.

We, at Conservation McDowell, would also suggest that S&TC may have missed the point about the trigger levels shown in the graph in Marine Harvest’s annual report. The graph does say that it shows when farms have triggered ‘national’ levels and these could be different for each country. It therefore could be interpreted that Scottish farms could have exceeded the trigger level more often than farms in other countries exactly because the levels are more stringent in Scotland than elsewhere. It doesn’t mean that sea lice control is any different to anywhere else. In fact, the fishery district report for Loch Ewe and Loch Maree in the latest Fisheries Management Scotland Annual Review for 2016 states that:

‘There was no evidence of heavily sea louse infested sea trout within the system’.

This is despite the latest campaign by S&TC to have the local farm removed to give fish numbers in Loch Maree a chance to recover. According to the SSPO data which the S&TC quote, lice levels are low.

The S&TC readily use reports from the SSPO and now Marine Harvest to criticise the salmon farming industry. They focus on sea lice levels on farms rather than provide the evidence that wild fish are actually dying as a result of the presence of local salmon farms. We, at Conservation McDowell, would argue that any evidence is rather circumstantial and that the latest research clearly questions a direct link between declining wild stocks and salmon farming.

In their press notes, S&TC state that ‘Fisheries scientists – including the Scottish Government’s own scientists – are firm in their conclusions that sea lice produced on fish farms harm wild salmon and sea trout.’  We, at Conservation McDowell, can only wonder at the way this is expressed. It sounds very much like these fisheries scientists have convinced themselves that there is a link but don’t actually have the evidence. In fact, just this month we received a letter from the Scottish Government that states:

As you will be aware there is currently no information on the impact of sea lice from Aquaculture on wild salmon in Scotland.

That seems perfectly clear to us. However, we at Conservation McDowell would disagree as our study, which is currently under peer review, shows that the declines in wild stocks began well before salmon farming arrived in Scotland. Unfortunately, these fisheries’ scientists, who are so firm in their conclusions appear unwilling to meet us face to face to discuss our study, as does the director of Salmon & Trout Conservation.

Instead, S&TC prefers to talk about salmon farms ‘pumping out huge numbers of juvenile sea lice into the local marine environment, which has consequences for wild salmon and sea trout smolts. This implies that the presence of juvenile sea lice in the sea is an inevitable death sentence for these young fish. We would like to use an analogy of driving a car on different roads to show that the link is circumstantial not proven.

It might be assumed that when driving down a quiet country road, the risk of hitting another car would be small as there are so few cars on the road. By comparison, the risk of hitting another car when driving along the busiest motorway with hundreds of thousands of other cars must be judged to be much greater yet millions of drivers happily drive up and down the motorways for years without ever hitting another car. In the same way, just because juvenile sea lice are in the environment, doesn’t mean that healthy young fish are any more likely to die from sea lice infestation.

Of course, the problem with wild fish is that many of the problems are simply hidden away out of view, unlike Marine Harvest who are simply trying to be more open and transparent.