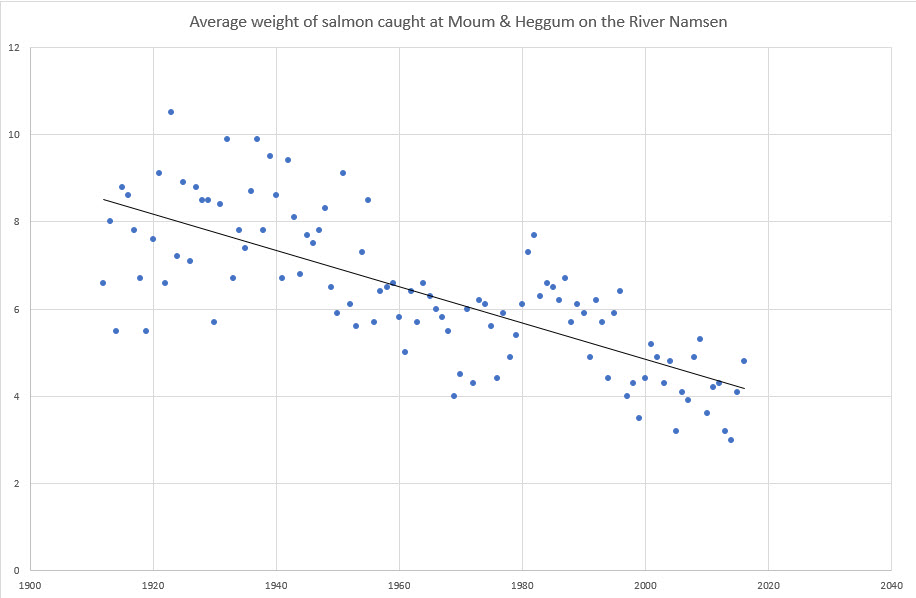 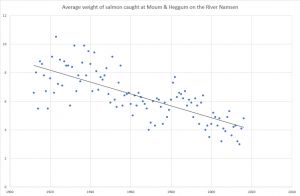 Changing weight: In the last issue of reLAKSation, we discussed the argument put forward by a fishery expert that fishing pressure on Chinook salmon in Alaska had led to the loss of the largest size fish that were once common in some of Alaska’s rivers. The view was that a reduction in the gene pool was reflected in the loss of genetic diversity amongst the Chinook salmon populations. One of our readers has drawn our attention to similar changes in fish size but this time with Atlantic salmon in Norway.

One of the most famous salmon rivers in Norway is the Namsen, also known as the ‘Queen of Rivers’. One of the best-known beats on the river is the Moum and Heggum, which has a long an illustrious history. One of the pioneers of salmon fishing in the Namsen was Englishman William Bilton who first fished the river in 1836 and subsequently wrote about his experiences. Extracts of his writing can be found on the Moum beat website (http://moum.no/historie/?lang=en ).

Although not going back as far as 1836, the beat has been keeping catch statistics since 1912. This includes the number of fish, the total weight, the heaviest fish and the average catch weight. This data is not only unique, it is also accessible.

We have taken two of the sets of data and plotted two scatter graphs. The first is total number of fish caught for each year and the second is the average weight for each year since 1912. The graphs are shown as follows:

It is clear from the first graph that as the years have passed, the number of fish caught has increased. This could be that there are more fish or that anglers have become more proficient at catching them. The exact reason is unknown but one thing is certain, salmon farming cannot be blamed as the trend began long before salmon farming arrived in Norway. 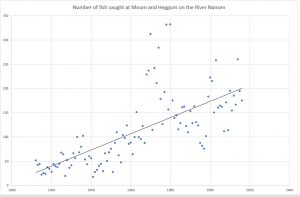 The second graph shows that as the years have passed, the average size of each fish caught has decreased. If the change had been recent then it might be argued that climate change was to blame. However, as the period covered goes back over a hundred years then climate is not an issue. The most obvious cause is long-term fishing pressure, not necessarily on this beat, but rather on the whole river. Unfortunately, as we mentioned, these statistics are unique, at least in the public arena, and therefore it is difficult to make an exact conclusion. However, the similarity with the Chinook salmon population in Alaska is clear. It does seem that fishing pressure has impacted on the genetic diversity of the population. 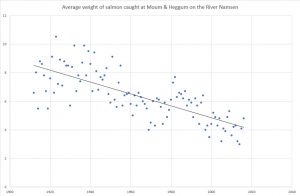 Of course, those working on salmon genetics seem to prefer to focus on the impacts of salmon farming as these are claimed to be the biggest risk to local stocks. Yet, this snapshot from the Moum & Heggum beat is potentially more worrying because it has happened rather than a being a threat. Smaller fish produce less eggs and thus fewer fish. In addition, there is no reason to suspect that the decline is at an end. The potential exists for salmon to become smaller than ever.

This fascination by some researchers with salmon farming is echoed in another scientific paper published in the ICES Journal of Marine Science. This aims to rank the biggest threats to Atlantic salmon in Norway. It come of no surprise that the two biggest threats are perceived to be escaped farmed salmon and sea lice. Yet, whilst these two threats are considered the most significant in the scientific arena – maybe because they will generate the biggest research grants, the same might not be said of some of those whose work brings them into close contact with Atlantic salmon on a daily basis.

Sunnmørposten (smp.no) reports that Jan Melseth, leader of the Sunnmøre river owner’s association argues that a shortage of food at sea is a much greater problem for wild salmon than sea lice. He says that many returning grilse are in a poor condition and showing signs of starvation.

Scale samples of 139 fish from the River Aure have been analysed by marine scientist Jens Chr. Holst who believes that young salmon are having to compete much more for their food. Fish are returning at around 1kg in size when they should be well over 1.5kg.

These observations echo the findings of earlier studies in Scotland which have named these starving fish as ‘Skinny Grilse’. This is not a new problem but one which is repeatedly pushed under the carpet. This is not surprising since it is much easier for researchers to focus on any problems that occur near the coast than those that are found far out to sea.

Marketing conflicts: Intrafish held their Leadership Breakfast during the Boston Seafood Show. This was sponsored by the new Chilean Salmon Market Council.

The breakfast was used as an opportunity to announce the launch of the Council, which will consist of salmon producers, industry suppliers such as the feed companies and government agencies and other sponsors such as NGO’s, customers and other stakeholders. The organisation will consist of a general council, an advisory board consisting of a group of professionals with expertise in marketing and a CEO who will be a US based industry professional. The idea is to have the first version of a marketing plan by 2019.

Clearly, the aim of the Council will be to promote Chilean salmon primarily to US consumers, however we, at Callander McDowell, are not convinced that this new Council is the way forward. It is possible to see from reports of the breakfast that there are already conflicting ideas as to the way forward.

Phil Gibson of the Resiliensea Group told those attending the breakfast that the salmon farming industry must work together to have a comprehensive marketing strategy that is communicated by everyone and sustained over time. Yet he also told the audience that when companies are struggling with a commodity, it is a race to the bottom. He said that this is why it is important for Chilean companies to identify themselves as brands. He added that if they can differentiate then it is possible to build equity and separate, whilst giving them a story to tell. He said that without that, it’s just going to be a piece of fish.

The problem is that branding on its own achieves little. The salmon still looks just like a piece of salmon. Branding has to go hand in hand with product differentiation, which is contrary to the idea of national generic promotion. Of course, there are some companies that have established themselves as brands, but they operate in a niche market rather than against the mainstream. It is not so easy to replicate these in the wider marketplace.

We have seen other generic approaches in the marketplace and are not convinced that the benefits outweigh the costs. The fact that a marketing plan is not expected before 2019 illustrates that this is no quick fix to whatever problems the Chilean industry hopes to solve.

Mr Gibson also told the breakfast audience that if the industry is to work together then they must have the same message. He gave an example of a market tag line that ‘still resonates with a generation later’. This was the ‘Got Milk’ campaign. This was conceived in 1993 for the California Milk Processing Board. It was later adopted nationally. One of those involved in the original concept was Jeff Goodby and he told Adweek that ‘Got Milk’ was the most remembered tag line in the US of any beverage including well known soft drinks and beers. Thus, it may have been considered to be a great success, however Mr Goodby also admits that a twenty-year downturn in California milk consumption levelled off ‘and even headed upward now and then’. In other words, huge consumer awareness did not necessarily translate into huge consumer sales. A good tag line isn’t necessarily the be-all and end-all of effective marketing.

Mr Gibson concluded that his suggestion for a campaign was ‘Salmon: Brain Food for Families’. Our view is that as well as being a definite no-brainer, it is a definite no-no.

Guilty pleasure: The ‘i’ newspaper reports that celebrity fish chef, Rick Stein’ has a guilty pleasure. He says that whilst a lot of the customers to his restaurants wouldn’t dream of going to a McDonalds, the burger chain is in the same business as he is and that is pleasing the customer. He added that he doesn’t understand why people get so aerated about it because he likes McDonalds and always orders a Grand Angus burger. He says it’s fabulous. However, we suspect he doesn’t eat them often as the Grand Angus burger doesn’t feature on McDonalds menu in the UK.

Mr Stein is not alone in liking McDonalds. In the US, Americans eat over 50 billion burgers a year although not just from McDonalds whilst McDonalds worldwide serves over 75 burgers every second. The numbers are huge. One of the speakers at the North Atlantic Seafood Forum suggested that there would be a massive upturn in fish consumption if younger consumers could be persuaded to forgo visits to McDonalds and eat sushi instead.

We, at Callander McDowell, are as unpersuaded by this suggestion as we think young people will be.

As much as the industry would like to think that young people might eat healthily in order to ensure they remain healthy as they grow older, the reality is that youngsters have a no care attitude where it is all about the now and not the future. The healthy eating message is lost on them and they are not listening.

The problem for the seafood industry is that McDonalds is not all about burgers. McDonalds offers a safe place where young people can meet their friends without spending a fortune. In fact, the menu is so varied that it is possible to spend very little money, which suits the wallets of many young people. As a rough guide, it is possible to buy hamburger, fries and a drink at McDonalds for about the same price as two pieces of salmon Nigri at Yo Sushi. Of course, it is cheaper to buy sushi from the supermarket but the supermarket isn’t somewhere for meeting friends.

Of course, it isn’t just about price. There is clearly a preference for McDonalds and its varied menu. McDonalds even sells a fish option, the Filet-O-Fish although compared to a basic hamburger, the Filet-O-Fish is quite expensive. We suspect it isn’t even popular. This is based on the fact that burgers are usually ready and available at the counter whereas Filet-O-Fish is cooked to order. Once McDonalds were so keen to get us one that when it arrived, the centre of the fish was still frozen.

McDonalds in Norway did trial a salmon wrap as a healthy option but as it was subsequently withdrawn, we can only surmise that it wasn’t a great success. People go to McDonalds because they know what they want. We are not sure that younger consumers would change even if McDonalds offered sushi on their menu. We think that the answer is by looking at what young people eat and then adapting that so these consumers remain on familiar ground. Even then, it won’t be easy.