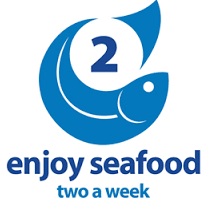 Consuming issues: Seafish’s ‘Fish is the Dish’ recently tweeted that ‘By eating fish twice a week, you can reduce your risk of heart disease and Alzheimer’s – it’s that simple’. Health is regularly promoted as a benefit of eating fish but we wonder how many people really start eating fish because they want to avoid major illness? Good health is certainly perceived by consumers as a benefit of eating fish but do we really want this to be the primary reason why consumers choose to eat fish? Do we want the younger generations to associate eating fish with sickness or should we be promoting fish consumption simply for the pleasure of eating? Are we at risk of losing the message that fish is tasty and good to eat?

According to the Scottish Sun, a new survey found that 82% of Scots had no idea that they should be eating two portions of fish a week and at least 70% actually fall short of this healthy eating advice. This is not surprising since those that do eat fish are more likely to be buying fish and chips than cooking fresh fish at home. The message to eat ‘two a week’ will therefore elude most of them.

Intrafish reports that SeaFish has now launched a new campaign to combat this deficiency and encourage people to eat two portions of fish a week as a simple step towards a healthier life style. The message of the campaign is ‘Fish2aWeek’.

We, at Callander McDowell, are somewhat sceptical that this new campaign will achieve its aims. In fact, it is not dissimilar to another campaign that ran in the fish sector for several years. The only thing different from this previous campaign whose message was ‘Two a Week’ is the word ‘Fish’. We are not convinced that the inclusion of the word ‘Fish’ will make any difference to consumers, although we have yet to see how the campaign is applied.

Our scepticism may be unwelcome, but it is borne out by the results of the latest UK Government’s annual survey for at-home fish consumption. These cover the period of 2015 which may seem a little out of date but the figures are part of a much bigger package of information which takes some time to produce. The survey shows a very slight increase in consumption on that for 2014 but that increase is more of a blip in part of a much wider decline. The data includes consumption of added value fish but what is of most interest is the fate of raw fish as can be seen in the following graph. This shows the amount of fish consumed as grams per person per week. 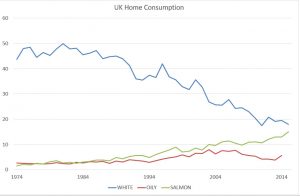 It is however worth remembering that in the short period since this data was recorded, times have changed. The price of several species of fish have increased in recent months. This applies especially to salmon and we are already seeing demand suffer. This is apparent as salmon promotions start to reappear in some supermarkets. The expectation is that when the 2017 data is eventually published, home consumption of fish will continue to be in decline.

Clearly, the ongoing decline is of concern but can a market slogan like ’Fish 2 a Week’ turnaround this downward trend? Sadly, we don’t think so. It’s going to take a much stronger and targeted message than this to convince people to eat more fish, especially those who never or rarely eat it. We suspect that most members of the public who would benefit from eating more fish will never see this message and if they do they will fail to understand it. It would probably be easier to convince the public to take an omega 3 pill than to eat more fish.

We, at Callander McDowell, are not great fans of generic marketing but if we were to pursue such an approach it would focus on enjoying the great taste of fish. If the public enjoy eating fish then they will gain the health benefits too.

Seriously???: The Press & Journal reported that salmon farming protestors targeted an industry celebration. The paper reported that Scottish salmon producers celebrated 25 years of the Label Rouge accreditation at a seminar and dinner in Edinburgh but there was also a protest outside as invited guests gathered to discuss the key role of farmed salmon in Scotland’s food exports.

According to the newspaper, Don Staniford, an arch critic of ‘factory’ salmon farming and supporters were at the seminar venue to highlight their concerns. What the newspaper failed to say was that the total number of supporters who turned up was four. Photographs taken by the protestors at the scene suggest that the total number of protestors was six and half. The ‘half’ being Mr Staniford’s young child.

We, at Callander McDowell, don’t like giving exposure to Mr Staniford and his antics but we wonder if the mainstream press, that is so ready to give him space, realise how few appear to support his cause?

The genes are out of the bottle: According to Intrafish, NINA research director Kjetil Hindar, believes that in future the genetic diversity of wild salmon will be so small that all wild salmon will look alike. However, Dr Hindar admits that this will not happen for many generations to come and is dependent on there being increasing numbers of escaped farm salmon. Dr Hindar does point out that if the number of escapes falls, then wild salmon will remain genetically diverse. In other words, the threat to wild salmon is actually minimal and this news is simply a way of attracting publicity for the publication of a new scientific paper that reviews half a century of genetic interaction between wild and farmed salmon.

It has long been argued that farmed salmon are genetically inferior to wild salmon and that they are not as successful if they manage to breed with wild fish. At the same time, if they are successful, their offspring are deemed to be less likely to survive. Farmed salmon have acquired a poor reputation, even though they originate from the same wild stocks.

Genetics is a difficult subject for the layman. Whilst, it can be possible to identify a farmed escapee from a wild fish by its physical characteristics, detecting genetic differences is a specialist area undertaken by a handful of researchers. In this new paper, they conclude that as long as there are escapes, the future for wild salmon will be a major challenge.

We, at Callander McDowell, have previously discussed how all life is undergoing constant evolution reacting to changing pressures. Jon Arne Grøttum from Sjømat Norges told Intrafish that 95% of wild salmon die at sea so any evolutionary pressure will be much greater than that which happens in the rivers. However, because it is easier to study what happens in the rivers, it is easier to judge that whatever happens there is a bigger risk to wild salmon than that which happens elsewhere. We have seen the same argument levelled at the interactions between sea lice and wild salmon. It is just a convenient argument to have in Norway.

The story in Canada is very different. KDLG Radio for Bristol Bay reported that Alaska Department of Fish and Game have found that Chinook salmon returning to ten Alaskan rivers including the Nushagak are smaller and younger than they were three decades ago. This is the conclusion from a study of the size and age of returning salmon. The cause of the change is unknown.

Mike Chihuly, a fisheries expert writing in Alaska Dispatch News, has studied the trends in the Kenai River. He relates how he recently met the daughter of Les Anderson, who is recorded as catching the largest ever Chinook salmon by rod and line. The fish weighed 97 pounds and 4 ounces. It is thought that the fish was actually over 100 pounds but Les was unable to weigh it immediately. Mike conjected that if he had access to the DNA of that fish, it would have been interesting to compare it with today’s fish. Whilst large fish were once common, nothing of a significant size has been caught for at least 36 years. Something has changed to restrict the growth of Chinook compared to what they used to be.

In his commentary, Mike Chihuly reflects about the daunting journey that Chinook salmon make through the Cook Inlet on their way to their spawning grounds.  He said that during the 1980’s and 1990’s more than 100 sports boats per day commonly trolled for the great Chinook salmon before they even reached freshwater. At the same time 500 drift gill netters each deployed 150 fathoms of gill net with another 450 set netters each with 105 fathoms of gill net spaced 600 feet apart. These set netters target sockeye but catch significant numbers of Chinook as by-catch. During the 1980’s personal dip netting also grew in favour so that currently dip netters catch up to 500,000 sockeyes and up to 1500 Chinook annually. Finally, sport fishing boats drift back and forth upstream in a frenzy to catch the specimen Chinook. In 1989, there were 160 sports fishing guides registered with Alaskan State Park but by 2006, the number was 354. Most guides carry four or five people per boat, all looking for that large fish.

Mike believes that all this fishing pressure on Chinook stocks has altered the gene pool by selecting out the larger fish and overfishing certain components of the run. This is known as ‘fishery induced evolution’. The consequence is that too many of this great fish were doomed. According to Mike, one of his friends said that ‘we humans flocked to the honey hole until the honey dried up’. We, at Callander McDowell can certainly believe it.

Some years ago, we argued that similar fishing pressure had also impacted on wild stocks in Scottish rivers in a form of ‘genetic drift’. Inevitably, indiscriminate killing of unselected wild fish must affect the overall gene pool with the potential to dilute some important traits. This idea was rejected by some sections of the angling fraternity but in the days before catch and release became much more the norm, large numbers of fish from each catchment were killed and retained. Photographs taken 100 years ago, show anglers with catches of dozens of fish. The widespread loss of such numbers of fish must impact on the genetic diversity of wild stocks. This loss continued year on year every year.

In Norway, catch and release is less common and many sports fishermen regularly kill the large salmon they catch. Could it be that the loss of generic diversity that is being reported may be due to this widespread destruction of the gene pool.

Of course, it is far easier just to blame salmon farmers. If they continue to be blamed for long enough then everyone just accepts that it must be true.