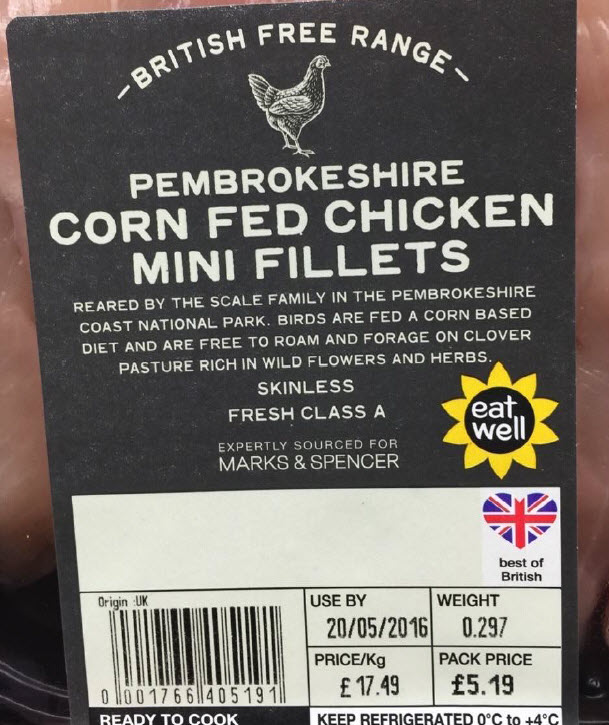 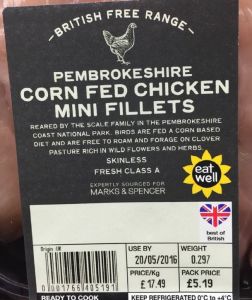 Whilst market access for sustainably fished cod and haddock is clearly important for Norway, cod exports to the UK fell by 1% in 2016 to 19,000 tonnes, compared to 72,000 tonnes of salmon. Although consumers eat less Norwegian cod than they do salmon, according to data from the Norwegian Seafood Council, 26% of consumers say that they eat cod at least once a week. Additional data from Europanel suggests that cod is the most consumed species in British households. Despite this popularity, the organisers of the Cod & Haddock Conference included a presentation from Professor David Hughes, Emeritus Professor of Food Marketing at Imperial College London, entitled ‘Wooing a new generation of consumers for cod and haddock in the UK market’. Professor Hughes works in the wider food industry and especially with meat and therefore his view of the market from outside the industry is clearly of interest.

As it happens, an invitation to attend the conference was sent to Callander McDowell and our Dr Martin Jaffa was delighted to accept. As someone who is interested in how fish consumption can be expanded, Martin was particularly keen to hear what Professor Hughes had to say.

Breaking slightly from our tradition of commenting on stories that have appeared in the media and press, we would like to further explore what Professor Hughes had to say and contrast his views with our own. We certainly welcome any different approaches as to how to persuade consumers to eat more fish.

Professor Hughes took the audience on a journey which began by asking the question as to whether white fish had had its chips. However, the journey was punctuated by diversions that looked at the trends in the meat and other sectors. For the less initiated, it could have been a confusing journey. The underlying message about the white fish market could have probably been summed up in a couple of slides. Consumption of white fish at home is in decline and the main reason is that cod is mainly bought by older consumers who are in the latter years of their lives. Young consumers, who represent the future of cod consumption, simply don’t buy cod.

This may paint a bleak picture but the disparity between this downward trend and the reported popularity of cod by Europanel is down to the coated cod products bought to make fish and chips at home. What is in decline is the purchase of raw white fish flesh that might be expected to be used in the cookery of other dishes besides fish and chips.

This decline is not of any surprise to us at Callander McDowell. In fact, earlier this month, our Martin Jaffa was in Tromsø as a guest of the Norwegian Seafood Federation to speak at their northern conference on this very subject, although the presentation was more about salmon than cod. Fish consumption at home is in decline in the UK and salmon is about the only species that is holding its own. Professor Hughes told the Cod & Haddock conference that there is a worrisome demographic for white fish at retail. We would suggest that this is a mild understatement. We have been following this trend for some years and feel, until now, that we were something of a lone voice. The industry wants to hear good news stories, not the bad, which is why there is such a strong message about fish and chips. However, even messages about fish and chips can be confusing. According to a report from Seafish, published this month, servings of fish and chips from the fish and chip shops (as opposed to retail) have increased 4.2% to 333.6 million. Yet just a year ago, the National Food Survey, which has been running since the 1940’s found that consumption of white fish and takeaway fish had more than halved between 1974 to 2014. The BBC reported that the same survey showed that the typical household bought 44g of white fish in 1974 and this has dropped to 19g in 2014. This is the same data that Professor Hughes used to illustrate the decline in fish consumption at the beginning of his presentation.

The big question is what can be done to reverse this trend? Professor Hughes offers a number of general thoughts about the way that white fish is presented in retail. These include:

These might all be great ideas but the reality is that they simply don’t work for cod and whitefish.  Cod is already available in 3 for £10 offers and can be bought for £1.66 per person per meal yet we are still having this discussion about how to increase consumption. Cod sold this way may be value for money but value for money isn’t enough if consumers don’t want to buy and eat the fish. The same applies to meal deals although we’ve never seen cod included in these deals.

Those who heard our Martin Jaffa speak in Tromsø will be aware how much attention he directed towards ready meals. However, the use of salmon and cod in whitefish are two very different propositions. There are a handful of examples of ready meals made with cod but generally, they are not a great success. The problem is that cod simply does not appeal to the ready meal generation. This also applies to lunch solutions, which are equally unappealing.

On paper, meal kits look the best proposition for cod but meal kits are not new. The idea is resurrected from time to time but they do not usually succeed. This is because they tend to be comparatively expensive and not something that consumer want to repeat regularly. This means recipes need to be changed often adding to the expense.

Finally, and most intriguing is the idea that new consumers can be wooed using adjectives, which not only will persuade them to buy the cod but also to pay a premium price for it. We have already repeated some of the examples cited by Professor Hughes but he also showed an example from Marks & Spencer that involved chicken. The label states:

‘British Free Range’ ‘Pembrokeshire Corn Fed Chicken mini fillets’ ‘Reared by the Scale Family in the Pembrokeshire Coast National Park. Birds are fed a corn based diet and are free to roam and forage on clover pasture rich in wild flowers and herbs.’

According to Professor Hughes, the label has several examples of enhancing the appeal of the product through the use of adjectives and other descriptions. We know who farmed the chicken and where they do it. We know the special feed the chicken receives and their freedom to range over enriched pasture land. Together this makes this chicken more appealing to the consumer. 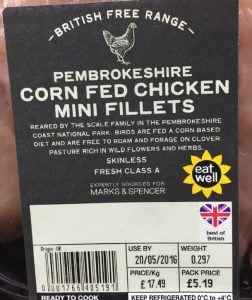 The pack illustrated in Professor Hughes’s presentation was dated May 2016. The same pack of chicken mini fillets is still available in Marks & Spencer but there is now a change in the label. This states: 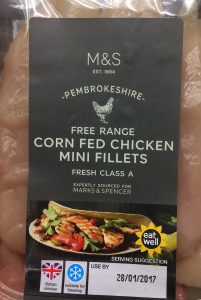 Many of the adjectives that Professor Hughes endorsed have now been removed. Our view is that most of the shoppers buying their food from Marks & Spencer trust the store to supply the best food available so don’t need all the extra reassurance that the additional information would bring. However more importantly, such labelling will never convince someone who doesn’t buy cod and other whitefish to suddenly start doing so.

Professor Hughes ended his presentation with a slide that he believes sums up the thinking of new consumers for cod and haddock. This begins with the statement:

I am willing to pay a considerable premium for your cod and haddock over other proteins because:

Sadly, we, at Callander McDowell think that such views are far removed from the reality of the younger consumer which is more along the line:

Cod is a fish for old people that I’d never consider buying.

The challenge of persuading such consumers to start buying and eating cod, other than in fish and chips, has never been greater than it is today. We, at Callander McDowell have always believed that putting fish into the type of foods that young consumers seem to prefer is the way forward but now we doubt whether this will even be enough. We now think that we need to tear up the ways of the past and think the challenges through right from scratch.  Meanwhile, there might be some short-term successes but we do think that the longer-term future may look somewhat bleak.

Cod taste test: Finding new ways to attract consumers to cod is not easy. Currently, there is just one product available in the UK market that we think achieves this aim or at least goes some way towards achieving this aim. The product is Asda’s Fishmonger Selection 2 cod fillets in Mediterranean style dressing. The 300g pack sells for £4.50.

We have previously reviewed the product concept but the product we tasted was made from salmon. There are other salmon packs in the range but this is the only one made with cod. What is unique about this range is that the consumer has only to remove the cardboard sleeve before placing the pack in a microwave. There is no requirement to slit the plastic cover before cooking. The pack is just placed in the microwave and then cooked for the perquisite time and left to stand before serving. This is as quick and easy it gets and is the simplest way for consumers who are wary about cooking fish to serve two portions within six minutes.

For us at Callander McDowell, the success of this product is hampered by two issues. The first is location of this and other products in the range. They are placed with other chilled fish but for us this is totally the wrong place. If shoppers are not confident about cooking fish, they are unlikely to even visit the chilled fish section so will never see these convenient meal solutions. They need to be located where consumers seeking convenience shop.

The second problem will be much harder to overcome. We, at Callander McDowell, are great advocates of eating fish and we are happy to eat fish at every opportunity however despite the Mediterranean flavouring, the cod itself was totally tasteless. The flavouring didn’t add anything at all and whilst we really enjoyed the salmon version we previously tasted, this cod dish was not something that we think will encourage consumers to buy any cod.

Nice idea, shame about the taste!