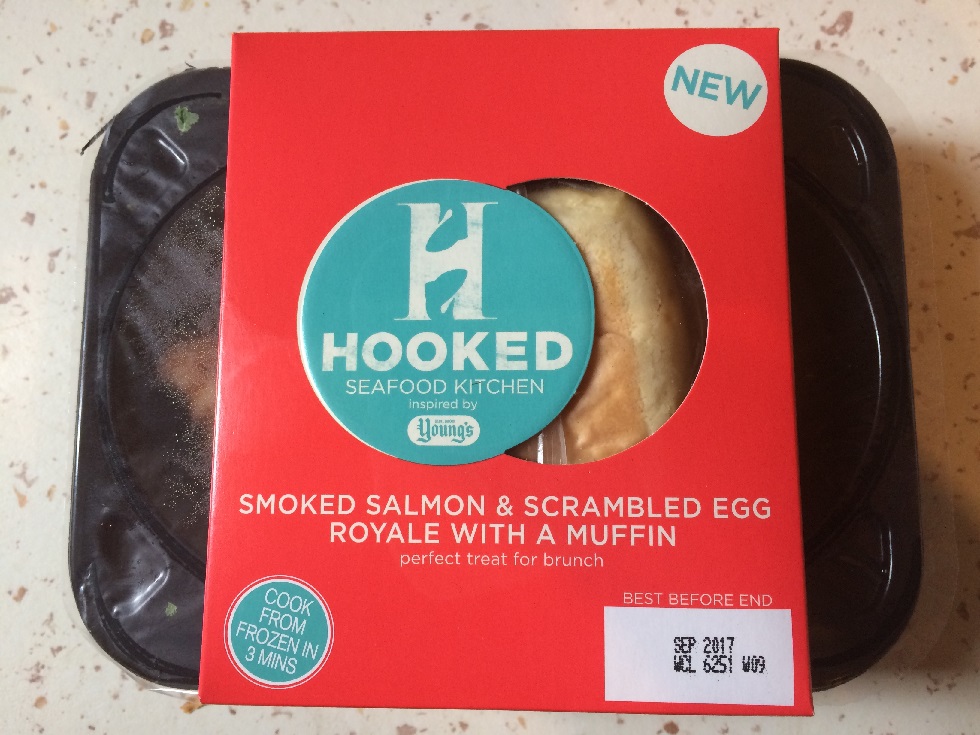 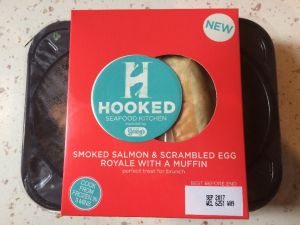 Why not?: The angling column of the latest issue of Scottish Field takes up just one page of the magazine’s 192 pages but in this single page has managed to discuss three different issues, although all related to alleged impacts of aquaculture on wild fish. Among them, we were interested to see that Scottish Field has posed the question why the Scottish Government is giving huge sums to fish farmers to solve problems that are entirely of their own making?

Scottish Field say that some £22 million has been produced for the Scottish Aquaculture Innovation Centre, although our understanding is the amount is half that. Scottish Field may have confused the figure as the industry matches the funding. They also point out that more funds have been sourced through SARF, the Scottish Aquaculture Research Forum. The range of projects includes sea lice control and waste management, which Scottish Field says are problems of the industry’s own making. However, this is not considered surprising given that the expansion of the salmon farming industry is an official Government objective

Since salmon farming is so important to the rural economy, we, at Callander McDowell, do not think it unreasonable that the Scottish Government invests in the industry’s future. However, this provision of funding is not aimed directly at the industry nor at the Scottish Aquaculture Innovation Centre. Much of the funding goes directly to academic institutions for applied research and the aquaculture industry only benefits from the resulting knowledge. If the funds weren’t used for aquaculture, then they would be directed at some other form of university research. Some of the SARF funding also goes to university research and some has gone directly back to Marine Scotland to support their own research. This funding is not an unconditional handout.

Of course, Scottish Field is simply trying to deflect attention away from the problems of the wild fish sector by focusing on the aquaculture industry. The Times newspaper has just published an article highlighting that salmon fishing on the east coast rivers this autumn has been some of the worst in recent years, with catches down by 50%. The major east coast rivers mentioned in the Times are located hundreds of miles from the nearest salmon farm so any problems are not the result of salmon farming.

Clearly, research is required to understand what is happening to salmon stocks in these rivers but we suspect that it will not be the anglers that are putting their hands in their pockets. Freshwater fisheries research has been a Government responsibility in Scotland for many years dating from 1882 when the Fishery Board for Scotland was established. The history of freshwater fisheries research is detailed on the Scottish Government website.

The origin of the current Freshwater Fisheries Laboratory in Pitlochry can be traced back to 1948 when two wooden ex-army huts were brought from Orkney. Although a lot of the early work focused on Brown Trout, this quickly changed to salmon, continuing work done started in the 1930’s.

In 1960, responsibility for the laboratory passed to the Department of Agriculture and Fisheries for Scotland, which was renamed the Scottish Office in 1991. Subsequently the laboratory became part of the Fisheries Research Service and is now Marine Scotland.

We have no idea how much it costs the Scottish Government to run the Freshwater Fisheries Laboratory but it has clearly invested much greater sums in freshwater fisheries research than its gives to universities to spend on aquaculture research. Scottish Field does not complain about such funds being used to support fisheries research.

Despite years of research, the state of wild salmonid fish stocks in Scotland seem as perilous as ever, if the latest reports are correct. Catches from the River Tweed this autumn were down from a five-year average of 4,000 fish to just 2,000. ‘Experts’ suggest that rising temperatures are to blame. According to the Times, this will make life difficult for businesses that rely on the salmon run for their livelihood. We wonder how long it will be before such businesses start to look to the Scottish Government for help? Angling clubs are already in line for handouts due to restrictions imposed by the Scottish Government on killing fish. There seems to be no complaints here and why not?

Hip and Chip: According to the Daily Telegraph the ten finalists of this years ‘Fish & Chip Shop of the Year’ competition have been announced. A subsequent ‘Tweet’ indicates that as part of getting so far in the competition, the finalists were immediately whisked off to Norway to see how Norwegian cod is caught and processed. Hopefully, the finalists left some staff behind to continue frying fish for their customers whilst they are off on their ‘jolly’ because one of the presentations made at the recent ‘Humber Seafood Summit’ indicated that sales of fish and chips are in decline in the U.K with a drop of nearly 9% year on year. Clearly, fish and chip shops, even ‘Fish & Chip Shop of the Year’ finalists cannot afford to lose a single customer.

So whilst the ‘Fish & Chip Shop of the Year’ aims to ‘big up’ the fish and chip shop sector with its annual competition, the more important question is why is consumption of fish and chips falling into decline? It’s not an easy question to answer because the sector appears to be suffering from mixed fortunes. For example, anyone passing the nearest fish and chip shop to our office would think that fish and chips are as popular as ever as there are queues out of the door into the street everyday even when it’s raining, yet another establishment just five minutes’ walk away is forever empty and the shop has changed hands more than once in recent times. They both serve fish and chips and other similar offerings yet, their fortunes are so different. It’s possible it’s simply down to reputation and perhaps the queue is all that is needed to attract new customers.

The queue or lack of queue doesn’t answer the question why fish and chips are losing popularity but our view is that they are simply too formulaic, a battered piece of fish and a portion of chips. We have often wondered that without all the added items on the menu such as pies, sausage and chicken, and even pizza, whether the traditional fish and chip shop would even survive.

Of course, it is not just fish and chips in decline. As we have pointed out previously, home consumption of fish is in decline too. This is in part due to an ageing population. Older people are more familiar with eating fish so tend to be high consumers. By comparison, younger consumers hardly eat fish at all. They are more likely to look for easy and more convenient meal solutions so rarely eat fish. We have repeatedly suggested that we need to do more to make fish more attractive to these younger non-consumers. This is the real challenge facing the fish and seafood sector.

We would suggest that this challenge also applies to the fish and chip sector. Fish and chips may be a tasty meal but they are an unchanged tasty meal. We were therefore intrigued to read in ‘Manchester’s Finest’, a web based news-letter, that a new eating experience is coming to central Manchester. From Thursday 27th October, the Hip Hop Chip Shop will be launching from the Kosmanaut Kitchen in Manchester’s trendy northern quarter from where they will be serving their untraditional chippy dishes inspired by the inventive and experimental ethos of hip hop culture.

Traditionalists may be horrified and may wonder whether this is a step too far but actually Hip Hop chips are already a success having operated out of a ‘Boombox full of fryers’ (mobile van) serving its unique offering at music events, parties and festivals all over the UK since 2014. Hip Hop are now ready to chuck down the anchors and settle in their new ‘crib’.

This is certainly one way to attract a different audience!

More Hilton: Over recent weeks we have questioned the menu choice offered by Hilton Hotel restaurants in the UK as part of the Seafood Week promotion. We have seen pictures of various menus tweeted that appear to be suggest the fish is MSC certified but which is clearly not.

Last week, we came across another special menu offered by the ‘Schpoon and Forx’ restaurant Hilton in Bournemouth. The menu included Arctic Char tartare as a starter and Atlantic halibut, herb crust. white beans, parmesan and swiss chard as a main course. As with all the other menus, the MSC logo is prominently displayed yet as far as we are aware, neither Arctic Char or Atlantic halibut from this side of the Atlantic are MSC certified. We would be surprised if Canadian halibut which is certified had found its way to the Bournemouth hotel restaurant. Actually, the MCS red rate wild Atlantic halibut in the UK. 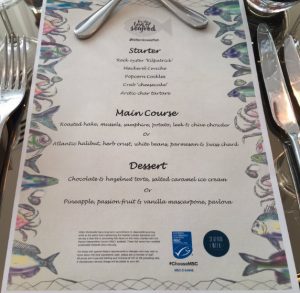 When we asked for clarification of why the MSC logo was applied to fish which weren’t certified, the response was:

‘the whole point of the event is that our hotels in the U.K. have now been certified from the MSC for the sustainable fish we use’

It seems to us, at Callander McDowell, that just because an establishment has gained a Chain of Custody certification from the MSC, it cannot just slap the logo on a menu because one species has MSC certification. The logo should be used only against the relevant fish species. The menu which was tweeted and which can be found on our website seems to imply that all the fish list is MSC certified when it is not.

If those involved in the sustainability chain do not understand the way fish are certified, is it not surprising that most consumers have no idea at all.

Breaking fast: A UK newspaper recently mentioned that Iceland, the frozen food retailer, appears to be going upmarket with some of its offerings. The store group has also recently launched a new format ‘The Food Warehouse’. Some of the frozen fish and seafood range are miles apart from the standard ranges found in other stores such as surf and turf, a fillet steak and large prawns for two.

This month the Food Warehouse launched a new range produced by Young’s Seafood under the Hooked Seafood Kitchen range. One of the dishes is Smoked salmon and Scrambled Egg Royal, a breakfast or brunch dish costing £2.50 for 140g. The product looks very different and therefore we decided to subject it to one of our taste tests.

The dish is a microwave tray of scrambled eggs, smoked salmon and spinach in a sauce together with a slice of muffin. The dish is heated in a microwave for a couple of minutes and the muffin toasted separately. It eats very well. The egg does not suffer from being frozen or microwaved and the smoked salmon is cut into big distinct pieces. The weak point is the muffin which is small enough to question the effort to cook it separately but it is not unpleasant.

This is a dish which makes a quick tasty snack and is one which we would certainly consider stocking in our home freezers. 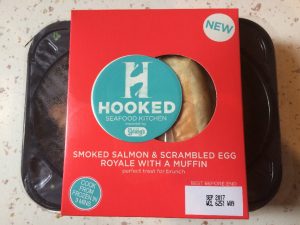 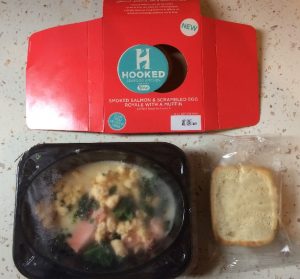 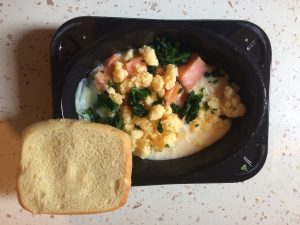