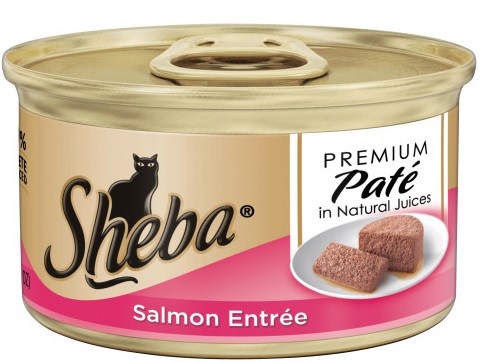 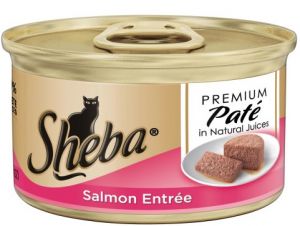 OMG: This week the BBC’s early evening news told viewers that levels of beneficial omega3 in farmed salmon has halved over the last five years.  Despite all the turmoil throughout the world, it must have been a slow news day for the BBC to elevate this story to TV’s national news because as the BBC rightly pointed out, farmed salmon is still one of the richest sources of omega 3 fatty acids.

Professor Tocher from Stirling University, who led the research, told the BBC that about five years ago a 130g portion of Atlantic salmon was able to deliver three and a half grams of omega 3 fatty acids. He said that this equates to the weekly recommended intake, therefore instead of eating one portion of farmed salmon, we now need to eat two.

Having raised his concerns, Professor Tocher urged consumers, who buy farmed salmon for its health benefits, to continue doing so. He said that farmed salmon is still the best way of getting omega 3 in our diets.

Dr Alison Tedstone, chief nutritionist at Public Health England said that ultimately everyone should eat more oily fish. Currently, the average consumption is only 54g of oily fish when the official advice is to eat at least 140g.

We, at Callander McDowell, would argue that the actual content of omega 3 is largely irrelevant if consumers aren’t actually eating the fish. We have pointed out over recent years that home consumption of fish is in decline and thus consumers are consistently failing to eat even the minimum requirement. Getting every consumer to eat even one portion of oily fish a week would be a major step, without thinking about changing the advice to eating two portions.

This week happens to be Seafood Week in the UK and the real challenge is to get the message to those who never eat oily fish or even consider eating oily fish. It is much easier to persuade those who already eat some oily fish to eat a little more but that leaves many who are deficient in dietary omega 3. This is why the focus at Stirling may be misplaced. It’s much better to eat salmon with a little less omega 3 than none at all.

The BBC say that the reason for the drop in omega 3 level is down to the success of the salmon farming industry. As the industry expanded, the demand for fishmeal and fish oil has increased. This has placed pressure on the forage fish used in fishmeal and this has had to be cut because too many forage fish were being caught. As a result, a reduced supply of fish oil has had to be spread more thinly and consequently the omega 3 content has fallen.

However, we think that the BBC has been economical with the truth. It was not exactly that too many forage fish had been caught but more that the environmental sector was targeting the farming industry claiming that the demands of the aquaculture sector were damaging the world’s oceans.

This was not exactly the truth. Rather, the aquaculture sector and salmon farming industry, in particular, were just easy targets for the environmentalists. Pressure from the environmental sector has forced a reduction in fishmeal and fish oil use but this might have been more palatable if fishmeal and fish oil was only used by the aquaculture sector, but it is not. Fishmeal is still widely used in terrestrial farming to feed animals that would never eat marine products. Fishmeal is also available in supermarkets as a garden fertiliser. Surely, in this day and age, this is a total abuse of marine products. But even more critically, about two and half million tonnes of fish is being used to feed pet cats and other animals. These are animals that too do not traditionally eat marine products such as fish, yet a huge quantity of fish product is being provided for their consumption. The problem we have is that whilst it appears unacceptable to use fish meal and fish oil in aquaculture feeds; used to feed fish that do normally eat other marine species, it is completely acceptable to feed the same fish products to our pets. There is a simple reason for this discrepancy in that, as we have already suggested, the aquaculture sector is an easy target for the environmental sector and as a target the industry may have been quick to roll over and acquiesce. By comparison, the environmental sector steers well clear of the pet food industry because pet owners are happy to give only the best to their animals, irrespective of the impact elsewhere. In fact, some environmental groups are keen to get into bed with the pet food industry because they know pet owners are usually generous in support of animal related causes.

Our view is that the aquaculture industry has been too quick to respond to environmental criticism. In the future, other sources of omega 3 will become available to help boost the content of salmon flesh. When this becomes a commercial reality then is the time when the aquaculture sector should consider forgoing traditional fish products as the main source of essential nutrients rather than dropping them before such alternatives are available. Professor Tocher has shown us the consequences of such rushed decisions.

Sea Hilton’s Food: In reLAKSation no 782, we asked whether Hilton Hotels had managed to get their act together concerning their special Seafood Week menu, which promotes MSC seafood. We asked this question because the menus promoted by two of the hotels appeared inconsistent. We have now seen a further three menus and are more confused than ever. We are not surprised that consumers turn off to eco-labelling when those within the supply chain appear just as confused.

Firstly, the Hilton Cardiff, offers some different dishes to the two we have already highlighted. However, their menu does not include the MSC within the name of the dish. Consumers would therefore assume that all the seafood on the menu is MSC certified. One of the dishes is Fish and chips but the species of fish used is not specified so it is impossible to know whether the fish is sustainable or not. Restaurants have been criticised in the past for not naming species because it is a way of using cheaper fish than the consumer might expect. We are not suggesting that this is the case with the Hilton group but as eco-labelling is supposed to bring transparency, naming the fish used should be expected. 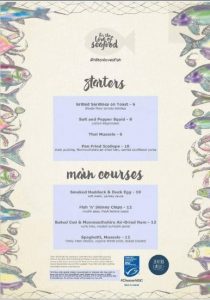 The menu from the Hilton Hotel in St Annes adopts a similar approach and no dish is listed with the MSC in the name. One of the dishes is sea bass, which also appears on the menus highlighted last week. Wild sea bass is currently the subject of much discussion regarding whether it should be fished at all due to concerns about the state of its stocks. In fact, according to the MSC website, certification for the only sea bass fishery that had been certified has been withdrawn. It’s probably safe to assume that the sea bass served in this menu is farmed which means it is not MSC certified. The menus highlighted last week did not include MSC in the name of the dish and this offering is the same as that mentioned then. 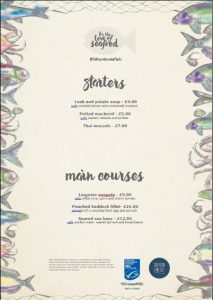 The third menu comes from Hilton Met in London. This lists six dishes; three starters and three mains. Only one of these does not include MSC in the name of the dish and this is Arctic Char. This fish is grilled and served with red quinoa, samphire, asparagus and tomato with a yogurt and lime dressing. Most Arctic Char is farmed and does not carry MSC certification. 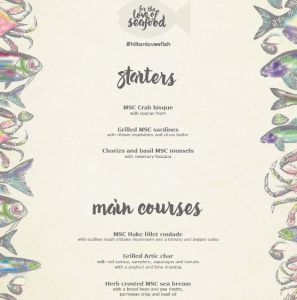 However, we, at Callander McDowell, we drawn to the third main course which is listed as Herb crusted MSC sea bream with a broad bean and pea risotto, parmesan crust and basil oil. Wild sea bream caught from around Cornwall is sometimes available but regardless, it is not MSC certified, neither is farmed sea bream which is much more widely available. As we have not seen the fish, we cannot be absolutely certain what fish is being served or whether it is MSC certified or not. It is just there are elements of doubt as to the fish and its certification as listed on these menus. We believe that the menus should be completely clear as to what is being served. We are confused so we expect that others will be too.

It seems that all Hilton Hotels are serving their special menu but others have not posted the menu on the web and thus they will remain a surprise to those who sit down to eat fish during Seafood Week.

Record revenue: Eco-labelling seems to generate more responses than any other subject from subscribers to reLAKSation. Recent issues of reLAKSation have been sea lice heavy so having read the blog on Undercurrent News from the Conxemar meeting, we will remain with the ecolabel theme. John Sackton, publisher of Seafood News.com said that the MSC will see an increase in their revenue to over £16 million during 2016. Mr Sackton said the reason for this increase is that the number of products that carry the MSC logo has risen from 17,200 to 20,000 (although the graph pictured suggests that the figure is 22,000). The increased number of products will boost the revenue generated by the MSC. Mr Sackton also said that the bulk of the revenue is generated by just three markets; UK, Germany and Belgium.

The MSC issued a press release om February this year highlighting that the number of certified products had passed the 20,000 mark. At the time, we suggested that this figure is misleading because many certified products have subsequently been delisted and therefore no longer exist. This includes products that are still listed in the ‘where to buy’ section of the MSC website. Clearly, if the number of current products is lower than Mr Sackton claims, then the MSC’s revenue will be not as great as claimed.

In another press release in June, promoting the MSC awards, the MSC say that the UK supermarket chain Sainsbury’s has the most certified products with now over 200. Whilst, it is impossible to say how many of the 20,00 products that have received certification until now are still current, we are able to measure those in a typical Sainsbury’s store. This week, we visited what we consider a good example of a Sainsbury’s store, especially in relation to fish and across counter, chilled, ambient and frozen, we counted a total of 115 MSC certified products. It is worth pointing out that not all are unique as these 115 include examples of the same product but in different sizes and examples of the same product but with a change of flavour. For example, tuna in spring water, tuna in brine, tuna in sunflower oil and tuna in olive oil. It is possible that some products were not available but we don’t think this will have changed the overall outcome.

If Sainsbury’s is typical of product turnover, then rather than 20,000 MSC products in the marketplace, there are more likely to be about 11,500; a significant difference. More importantly, for the MSC, this could represent about 60% of John Sackton’s estimate of revenue.

Whilst looking at the press releases, we were surprised to read that due to the efforts of over 280 certified fisheries, consumers in over 100 countries can choose from a variety of MSC labelled products covering more than 100 different species. The list of certified species covers 46 named fish and shellfish. We appreciate that some of these may cover multiple species such as salmon but we are struggling to come up with 100. Clearly, if there are 100, then the MSC should list them, otherwise how does anyone know what is certified and what isn’t, otherwise how does the consumer really know whether the fish they eat is certified or not. Our previous commentary indicates that it is not just consumers who seem to have no idea.