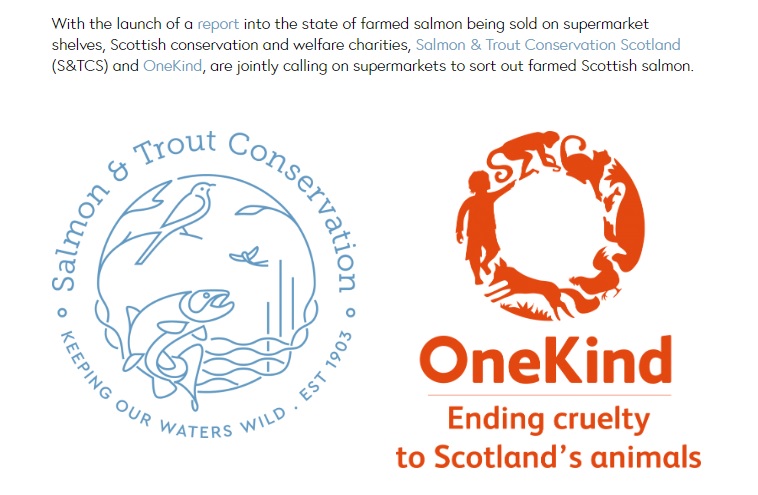 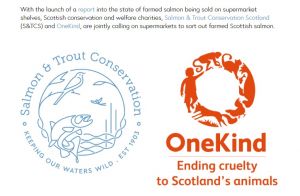 Hypocrisy: On 9th December, Salmon & Trout Conservation Scotland issued a press release that announced the publication of a joint report between themselves and OneKind. The report is titled ‘Responsibly Sourced’ and suggests that supermarkets face a crisis of credibility unless they address ‘failings’ of the salmon farming industry.

Whether the data they quote is accurate and correct is a matter for the Scottish salmon industry to address, what is of more relevance is the relationship between Salmon & Trout Conservation Scotland and OneKind. The logos of both organisations are shown together in the report. 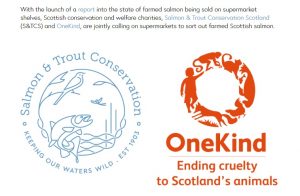 What stands out is the clear message from OneKind – ‘Ending cruelty to Scotland’s animals.’ The judgement of whether farming any animal is cruel is down to an individual’s conviction but the big elephant in the room which is not addressed is why an organisation dedicated to ending cruelty to Scotland’s animals has linked up with an organisation which promotes catching and killing animals for sport. Whether angling is considered cruel may also be down to an individual’s conviction but Corin Smith who has been recruited by Salmon & Trout Conservation Scotland as their media consultant recently discussed the issue on a podcast. 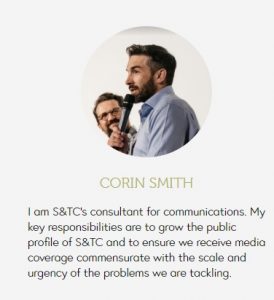 The podcast appears on the Pace Brother’s ‘Into the Wilderness’ hunting and fishing series – number 128, the title of which is ‘Corin Smith, Fish Farming, Atlantic salmon and the Future of Angling. The podcast can be found at:

This link is through ‘Spotify’ which presents the time as a countdown to the end of the podcast. At about a time of -1.31, Mr Smith states that

As a keen angler, angling guide and representative of Salmon & Trout Conservation Scotland, Mr Smith is ideally placed to pronounce whether angling is cruel or not. He clearly states it is, even repeating the point a second time.

In his profile on the Salmon & Trout Conservation Scotland website, Mr Smith says that he wants to ensure that they receive media coverage commensurate with the scale of the problem. Perhaps the media will pick up on the fact that OneKind are clearly demonstrating the sheer hypocrisy that exists whenever salmon farming is in the spotlight. OneKind say that they want to end cruelty to Scotland’s animals but clearly turn a blind eye to the 5.9 million wild fish caught on a hook and killed by anglers, many who have not been trained in despatching a fish in a humane manner. In addition to all those fish that have been caught and killed, many millions more are caught and then released back into the water most probably in a state of exhaustion and stress, which can often lead to a premature death. These are all fish that were on the way up the river for the sole purpose of breeding and creating the future generations of wild salmon.

According to Mr Smith, angling is inherently cruel and as such I would have thought that OneKind should be demanding an immediate ban on all salmon and sea trout fishing in Scotland as well as a ban on angling for coarse and marine species.

Salmon & Trout Conservation Scotland together with Onekind are deliberately trying to undermine consumer confidence in the farmed salmon they buy. The focus should be turned towards the hypocrisy of those promoting this campaign.

The good people at Fishwise Edinburgh have also questioned the ethics of the relationship between OneKind and Salmon & Trout Conservation Scotland and wrote to OneKind to highlight the issue. OneKind responded and their email has been forwarded for readers of reLAKSation.

Their response is as follows:

Just because the angler representative organisation ‘Salmon & Trout Association’ cynically changed their name to ‘Salmon & Trout Conservation’ doesn’t mean that they stopped representing anglers’ interests.  The whole point of their campaign against salmon farming is to safeguard wild salmon for anglers to catch and kill. In the podcast Mr Smith describes how removing the salmon farm in Loch Ewe will regenerate jobs for ghillies to work in Loch Maree. He also mentions his angling guiding business. The Director of S&TCS, Mr Andrew Graham Stewart writes the angling reports for Trout and Salmon magazine very month.

The S&TCS annual fundraiser auctions off angling trips as well as lots for shooting and hunting, most of which are donated by members and associates of Salmon & Trout Conservation.

And let us not forget that Mr Smith can be clearly heard on a podcast saying his sport is inherently cruel.

If OneKind have been told that S&TCS has no association with sports angling, then at best they have been misinformed. However, if they have been misled about their relationship with S&TCS then it is also believable that they have also been misled about the salmon farming industry. There is so much misinformation in circulation that many believe it to be true without bothering to check the facts. Unfortunately, in the modern world of social media it seems that just because something is published on-line doesn’t make it true.

Martin’s View again: Five months ago, salmon farming critic  Corin Smith wrote to the Information Commissioner to complain that although he had subscribed to the reLAKSation mailing list, his request to be taken off the list was being ignored. He sent the commissioner a reply to one of the mailings that stated: “There used to be the odd interesting topic, now it just sounds like the rantings of a marginalised organisation completely disconnected from reality.”  This mailing never arrived, however once Callander McDowell was made aware of his request, Mr Smith’s address was removed from the mailing list yet now, Mr Smith appears to be an avid reader of the mailing through the website.

In the last issue of reLAKSation, I commented on an interview Mr Smith gave to the Into the Wilderness podcast. I also offered to meet with Mr Smith especially as he had stressed the importance of meeting face to face during the podcast. Unfortunately, I have not heard from Mr Smith but am hopeful that one day he will realise that the best way to address his concerns is to speak to a whole range of people from across the industry.

Although I have not heard directly from Mr Smith, he has been active on Twitter making his views known. He has so far made two postings in response to my comments. The first states: 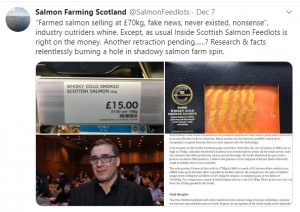 “Callander McDowell’s business is to monitor prices across all the retail sector, and I am unaware that M&S priced any salmon priced that high.” God help anyone who actually pays for your “advice”. 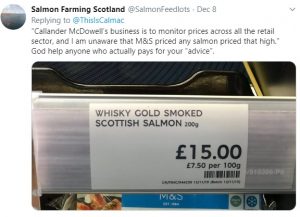 It is important to point out that when prices of salmon are quoted, they refer to fresh chilled salmon, not added value products such as smoked salmon. There is a massive difference between the two. The additional processing and ingredients increase the overall price.

Self-proclaimed salmon farming expert, Mr Smith claims that his Inside Scottish Salmon Feedlots is right on the money as demonstrated by his research and facts.

I would rather not have to labour this point, but I will leave it you, the readers of reLAKSation, to come to their own conclusion as to whose facts are correct. Prices can be easily checked by anyone at any M&S store and I invite everyone to do so.

it’s not surprising that Mr Smith continues to confine his comments to Twitter rather than accept my offer to meet. This offer still stands.

Sunburn: Hakai magazine recently published an article about sunburn in farmed fish. The authors of a new study suggest that fish trapped in surface layers might suffer a host of problems by not being able to escape the light. Fish can suffer from sunburn just as much as humans. Lynne Sneddon a bio- veterinary scientist at Liverpool University says that excessive exposure to sunlight can weaken the fish’s immune system, making the fish more susceptible to disease and infection.

The impact of sunlight can be easily missed especially when the sunshine is not sustained. Last year, a large number of wild salmon died in the Blackwater River after they were trapped for many days in sea pools because of the lack of freshwater running down the river due to the excessive heatwave experienced across the whole of the UK.

Not unexpectedly, the fish which were naturally carrying sea lice, suffered a secondary infestation brought about by the faster than usual reproductive cycle due to the warmer water and lack of flow. Unfortunately, because the angling fraternity already has an extremely blinkered view of sea lice, it was immediately suggested that the local salmon farm was to blame for the deaths. The Fish Health investigation came to no firm conclusion because the damage had been done long before the fish died and had been masked by the subsequent sea lice outbreak.

Norwegian ownership: One of the recurring themes championed by Mr Smith and the wider anti-salmon farm lobby is Norwegian ownership of a large slice of the Scottish salmon farming industry. Mr Smith argues that the vast amount of money generated by salmon farming is not re-invested into Scotland but is distributed to distant shareholders. For example, he claims that anyone driving around the west coast will not see big cars or newly built mansions, as if that in itself is an indication of the success of salmon farming. It is clear that salmon farming has brought wealth to the area in the form of jobs for younger people, more kids in local schools and improved local services. These may not be important to Mr Smith, but they are, to many others.

However, Mr Smith misses the real point about ownership together with other aspects of his campaign. There aren’t too many people still around in the salmon farming industry who remember when there were nearly a hundred separate farming companies, most of which were locally owned. This is very different to the picture of salmon farming today and this is down to mainly one thing and that is regulation. Mr Smith maintains salmon farming is poorly regulated. He is wrong, it is highly regulated.  Mr Smith thinks it is necessary to impose more regulation on the salmon industry in order to bring back the wild salmon he thinks have gone due to salmon farming.

The current regulations involve a vast amount of management, but this is well beyond the capabilities of very small, owner run companies. As the industry has grown and more regulatory burden has been introduced, many smaller owners were unable to cope and opted to look to sell instead. Ownership has changed over the years as regulation has become ever stricter. The industry is now at a point where only large corporations are able to effectively manage regulation. It just happens that the corporate structure is mainly Norwegian because salmon farming is such an important industry there.

Mr Smith probably won’t remember but the salmon industry was started by companies such as Anglo Dutch owned Unilever. This was during the 1960’s and 1970s’ but in the end they decided that salmon farming was not part of their core business and sold out. Salmon farming has evolved to where we are today and continues to evolve.

There is another point worth noting. Mr Smith is convinced that investment is not reaching the local people. Did it ever? A quick review of ownership of land in Sutherland reveals that there are 73 owner occupiers, 44 owners living in England and 11 living abroad. However, this is slightly misleading as most of the local owners own a farm or a smallish plot of land, whereas the owners from England and overseas are more likely to own larger portions of the land or even the big estates. Local economies are unlikely to benefit any more from these estates as they are from salmon farms. Employing a few more ghillies is never going to radically reform the west coast economy. Locals were migrating away from the area long before salmon farming arrived. Promoting the Highlands as one big game sports ground is unlikely to change anything.