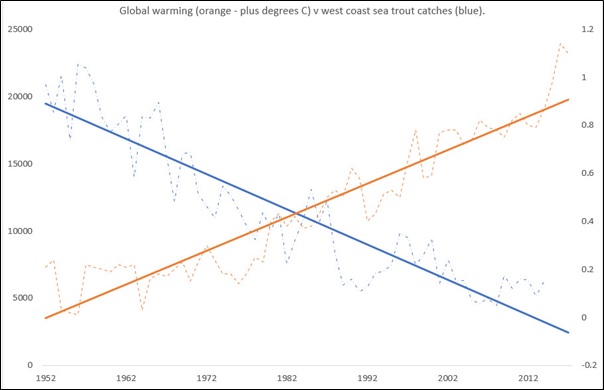 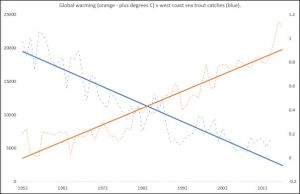 Pathogens: The North Shore News in Canada’s BC recently reported that wild salmon advocates have said that interim rules meant to strengthen reporting of pathogens in farmed salmon amounts to just a tiny tweak.

Stan Proboszcz, senior scientist with the Watershed Watch Salmon Society said it’s a kind of joke. They have been consulting with the government to phase out net pen salmon farms because they say there is a spill over of pathogens into wild salmon populations.

These pathogens include sea lice which are blamed on the demise of wild fish populations, despite the absence of any hard data. Independent salmon scientist Alexandra Morton is described as being shocked to see no mention of mandatory screening for bacteria and viruses. Of course, it is her team that have claimed that such bacteria and viruses are killing wild fish as well as sea lice. It’s a wonder that there are still wild salmon swimming around salmon farms given the catastrophic damage that these scientists claim salmon farms cause to wild fish.

What is most surprising about such claims is that these scientists, especially Alexandra Morton, ignore any other possible explanation as to why wild salmon are in decline. It will be interesting to hear what Ms Morton has to say if salmon farms are removed and wild fish stocks fail to recover. The chances of this actually happening are quite likely.

Perhaps, Ms Morton is so focussed on salmon farming that she is unaware of other possible causes impacting on wild salmon. Maybe she doesn’t read international newspapers such as the Guardian and therefore didn’t see the headline ‘US Cruise ships using Canada as a ‘toilet bowl’ for polluted waste’.

It seems that lax Canadian regulations create a ‘perverse incentive’ for US cruise ships en-route to Alaska to discharge a toxic mix of chemicals and wastewater off the BC coast. A new report from environmental organisations Stand.earth and West Coast Environmental Law estimate that more than 31billion litres of pollution is estimated to be discharged. Cruise ship pollution includes large volumes of toxic sewage from toilets, greywater from sinks showers and laundries and bilge water. In addition, waste from the scrubbers which remove exhaust gases from the heavy bunker oil and which creates an acidic wastewater containing a cocktail of chemicals is also discharged. In one week, a cruise ship will generate 200 million litres of waste from scrubbers alone.

The report says that when released into the ocean, the wide array of toxic substances poses a significant threat to aquatic wildlife and the habitat and food webs on which they depend. Including threatened populations of sea otters and orcas that live off the BC coast. Ms Morton’s original interest concerned orcas which she said were threatened because of a lack of food due to salmon stocks being decimated by salmon farms. Yet could it be that the orcas are really at a greater threat from tourist waste at sea, as are the salmon on which they feed.

Folly: Most reader’s letters to newspapers tend to be in response to an article or a piece of news so it was surprising to read a letter in the Scotsman that was written simply because the author was fed up spending large amounts of money on a fishing holiday and not being rewarded with a salmon to catch.

Michael Troy of London wrote that he had recently returned from another trip north but after twenty years of visiting Scotland to mainly fish or shoot grouse, he is planning to fish rivers in those countries that look after their migratory salmon & sea trout stocks. He says that unless the Scottish Government address the issues, the iconic salmon population and the many millions of pounds generated will die out completely.

I always find it interesting that the angling sector say that it is up to the Scottish Government to do something to protect wild fish, whilst they continue to catch and kill the fish for sport. They seem to forget that the local salmon fishery boards are the statutory bodies responsible for managing stocks. Perhaps, Mr Troy’s ire should be redirected to the local salmon fishery boards and not towards the government.

Mr Troy says that whilst there are obviously issues with global warming adversely affecting the northern European river systems, there are still things which could be done now.

The most pressing of these is to cease encouraging the environmental disaster of salmon farming and transfer it to contained systems to avoid sea lice infestation. Of course, it is not surprising that Mr Troy highlights salmon farming as he and his fellow anglers only hear one side of the story and thus salmon farming is vilified for the decline in wild salmon even though the river Mr Troy fished and from which he failed to catch a single salmon, is a long way from the nearest salmon farm.

He said that the week he fished in June there were just 17 fish caught in the whole river system. Perhaps he simply fished the wrong river at the time he visited. Interestingly, there was no fishing report for the river Dee in the latest issue (August) of Trout & Salmon magazine. The issue did include a report from anti-salmon farming campaigner Andrew Graham Stewart about the rivers in Wester Ross and most specifically about the River Ewe. Although the report provides full names, I will simply use initials. It is also typical of the tardiness about releasing catch data that Mr Graham Stewart’s report in the August issue is for May.

In the week of May 9th when there was a lift in the water AB landed a brace (best 16lb) and JRB landed one of 10lb.

In the week of May 16th HW landed one of 12lb and RD one of 15lb – the river was however lightly fished.

Perhaps Mr Troy should have visited the west coast instead of his usual beat on the Dee. He might have found it much more productive.

Climate: Last month, BBC news reported on a new study into the effects of climate change on Atlantic salmon. Scientists from the University of the Highlands & Islands, and the Department of Fisheries and Oceans in Canada will examine how different migratory populations may be responding to marine and freshwater conditions which can be affected by temperature and rainfall levels.

Brian Shaw of the Ness Salmon Fishery Board said that historical run patterns have been identified but will these trends persist given what’s happening together with predicted changes in climate?

Yet climate change may have already had significant impacts. The problem is that the wild fish sector isn’t interested unless any patterns fit in with their existing narratives.

Some time ago, I plotted known climate temperature changes against sea trout declines on the west coast of Scotland. In my view the graph is pretty conclusive yet, the wild fish sector weren’t interested. Like in Canada, the established narrative is that it is salmon farming that is primarily responsible and nothing else matters. On the east coast, the salmon fishery boards are spending millions planting trees to protect wild fish stocks against hotter conditions. Why cannot even small increases in temperature have already had an impact?