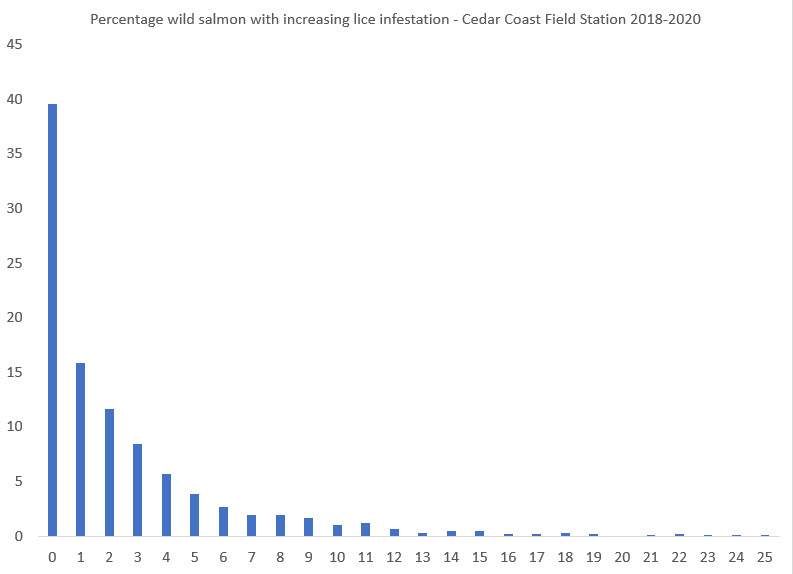 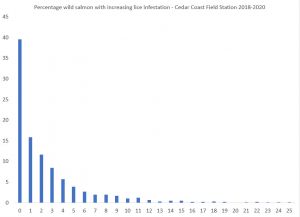 There’s no catch:  My recent comments about the state of Scottish salmon and sea trout catches have provoked the keyboard warriors to respond. I don’t bother looking at their comments as they usually tend to be abusive but readers of reLAKSation have drawn my attention to the fact that this time their comments appertain to the message rather than the messenger.

Firstly, I would apologise for the typo in last weeks reLAKSation. The final section compared the official catch data of 27,906 fish compared to the 29,016 fish for the same areas listed in the Fisheries Management Scotland Annual Review. A zero went missing. However, it did not affect my message that another 1,110 fish seem to have appeared on top of the numbers in the official statistics.

I’ll start off with Mr Jon Johnson who in response to another user who tweeted my graph comparing salmon and non-salmon farming areas and comments that about 95% of all Scotland’s wild salmon are caught off the east coast where there have never been any salmon farms. Mr Johnson says that this doesn’t make sense and that I have been twisting the figures. He suggests that it cannot be a coincidence that most salmon are caught in areas where there are no salmon farms. He says not to believe this industry of death and pollution and masters of manipulation.

Unfortunately, Mr Johnson does not appear one for detail, especially if it is detail in which I have been involved. I will therefore repeat the graph drawn by Marine Scotland Science in their 2016 report about catch data. 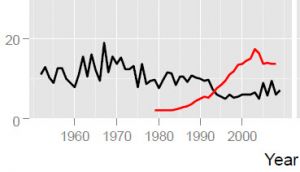 This graph shows west coast salmon catches from 1952 onwards – the black line. Prior to the arrival of salmon farming, the west coast catch was about 12% of the Scottish total, which means that 88% of salmon were caught elsewhere. The change from then until now is about 7%. The reality is that west coast rivers never had many salmon as compared to elsewhere. Sadly, Mr Johnson is typical of many of the critics in that he is not interested in the facts as they might get in the way of his (misplaced) hostility to the industry.

A second comment comes from outside Scotland – an anonymous tweeter from Puget Sound. He says that my use of catch stats for this is not science. He continues by quoting a recent paper about the River Dee which says that catches are not necessarily the most accurate indicators of salmon stock size. This is not helped by catches that go unreported and catches that change to the number of anglers fishing.

Actually, his statement is true. Catches are not the most accurate indicators of stock but over long time series, any inconsistencies tend to be evened out. Of course, fishing effort is important, and it is a pity that Scottish scientists took twenty years after measurement of catch effort was introduced in England and Wales to do the same in Scotland.

Whether this tweeter wants to argue whether using catch data is science or not, I would like to mention that Marine Scotland Science cite two papers using catch data to assess stocks in their summary of science as posted on the Scottish Government website.

Finally, back in 2013 and 2014, Marine Scotland Science produced a couple of annual reviews of the status of Scottish salmon and sea trout stocks. In the reports, they stated that:

“The potential limitations of rod catch data should be considered when interpreting catch-based assessment. However, rod catches are the most comprehensive indicator of stock status in terms of temporal and geographic coverage, and in many areas are the only information available.”

Perhaps instead of criticising my use of catch data, their ire should be directed at those who have seen the limitations of using this form of data but done almost nothing to provide a more reliable measure of stock status.

We now come to the offering from someone who claims his name is Robert Cameron. He says that I refuse to admit that all Scottish wild salmon will come into contact with disease, pathogens and lice from farms in Orkney, Shetland, Norway and Iceland. These fish feed alongside disease ridden escapees in Greenland. Science is about investigating.

Unfortunately, Mr Cameron doesn’t provide any scientific credentials to support his theory but there is no evidence to support his claims. Sadly, Mr Cameron is another critic blinkered by years of unfounded claims by the wild sector.  What is clear is that when the science doesn’t support his view, he resorts to making it up as can be seen from the attached tweet. 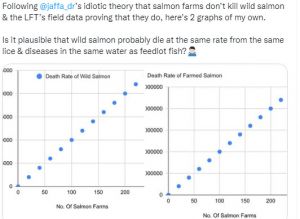 Another comment comes from a Greek NGO – Terra Sylvestris – who wrote that science is about science not really analysing newspaper diagrams on the internet by yourself and making such completely erroneous generalisations. I presume that this NGO has no problem making the generalisation that wild salmon are being killed by the presence of salmon farms, because there is no scientific evidence that they are. It is all conjecture, yet this has not stopped the debate raging on for over forty years.

The final comment comes from Donald Johnson, someone who has claimed to be a lawyer, a lecturer and a teacher (but not a scientist). He suggests that those pondering the demise of wild salmon should take note that, more than 9 million farmed salmon have died during the last seven years from disease, that salmon farms are acting as disease reservoirs in the route of migrating salmon.

However, he doesn’t say what disease from salmon farms could be killing wild salmon and more importantly, the number of wild salmon returning to Scottish rivers has been in decline since 1971 as stated in a report about a new scientific investigation into the fate of wild salmon by the University of Highlands & Islands.

I have spent the last ten years researching the interactions between wild and farmed salmon. It is obvious that, by comparison, these commentators have spent all of ten minutes to do the same thing.

Community?: I recently discussed the advertisement placed in a number of local newspapers from a disparate group of salmon industry critics. Salmon Scotland described the advert as garbage and rightly so because the only thing that those who contributed to the advert had in common was a total unwillingness to discuss the issues.

One of the organisations listed in the advert was the Friends of the Isle of Jura, part of the Coastal Communities Network. CCN send out a newsletter every month and recent issues have mentioned the CCN Forums, one of which is about aquaculture. The purpose of these, are for members and associated groups to meet, plan and learn from one another. They also invite guests to come and speak.

Given their repeated claims, as described in their advert, including that salmon farming is impacting wild salmon and sea trout, I wrote and offered to speak at their aquaculture forum. Sadly, my offer to speak was rejected immediately. It seems that the CCN are only interested in learning from people who agree with them, not those who might offer a different perspective. Its not a surprise that the debate about the impact of salmon farming rages on after many decades, when there is such intransigence in hearing the view from all sides.

This week, BBC Radio 4s Farming Today is featuring salmon all week. The first interview on the first programme was with John Aitchison, Chair of the Friends of the Isle of Jura. He told the programme that communities such as his have difficulty in having a say in the process of salmon regulation, despite having had this long interview on the radio and also according to their newsletter, having recently had meetings with the Minister and the head of Marine Scotland, it seems that they are having a great deal of say in this matter regardless of the fact that they are not representative of the community nor it seems actually knowledgeable about the subject. In the interview, Mr Aitchison says that they not only have to learn about this ‘stuff’ but to do so quickly. Unfortunately, they only want to learn about stuff that supports their cause not the actual truth.

Mr Aitchison says that salmon farming is not environmentally sustainable including contributing to the decline of wild salmon. Yet he offers no evidence to support this claim. Instead, he says that salmon farms should be able to prove that they are doing no harm, which is a really ridiculous suggestion. How can anyone prove that they didn’t do harm, when they didn’t do it. By comparison, we know that since 1952, anglers have caught and killed 5.9 million wild fish for sport yet, I don’t hear Mr Aitchison or the CCN campaigning to ban angling, despite the fact that clearly angling has done harm to the wild stock. As I mentioned previously 806 wild fish were caught and killed from the rivers around salmon farms last year and not one environmental campaigner has said a single word about it. Yet salmon farms are perceived to be the devil incarnate.

Let’s not beat about the bush, this is not about the environment given the real interests of the Coastal Community NIMBYS.

More Morton: This week Alexandra Morton, ‘the independent biologist fighting to save wild salmon’ tweeted that sea lice can kill juvenile salmon outright. This was in response to an article in the Narwhal that some salmon farm sites had high lice counts.  The coordinator at the Cedar Coast Field Station in Clayoquot Sound, Mack Bartlett said that the smallest juvenile salmon they had sampled also had high lice counts, although no numbers were provided.

I have managed to access their juvenile salmon data for 2018-2020 and have conduced my usual lice count per host analysis. The resulting graph is below

Not unsurprisingly, the graph shows a typical aggregated distribution with most wild salmon carrying no or very few lice. Just a handful have high lice counts (max 65) of which 17 fish were infested with more than the 25 lice shown in the graph. This is out of a total 2,565 fish.  This is yet another example of aggregated distribution of parasitic sea lice, something which most researchers into salmon interactions simply ignore. I am not sure how many datasets I need to analyse before the message starts to hit home.

In relation to Canada, I wrote to Alexandra Morton to recommend that as a biologist she should do a little research into aggregated distributions and the implication for wild salmon. She did not reply. I am not surprised because 96% of the Cedar Coast Field Station fish sampled are under the Wells et al. mortality threshold.  One day, Ms Morton might be able to explain to me how so many wild salmon can be dying from sea lice when the majority of fish sampled around Clayoquot Sound carry so few sea lice?

Thanks: I would just like to thank everyone who reads reLAKSation especially as no 1076 attracted my largest audience ever. Thank you to you all.