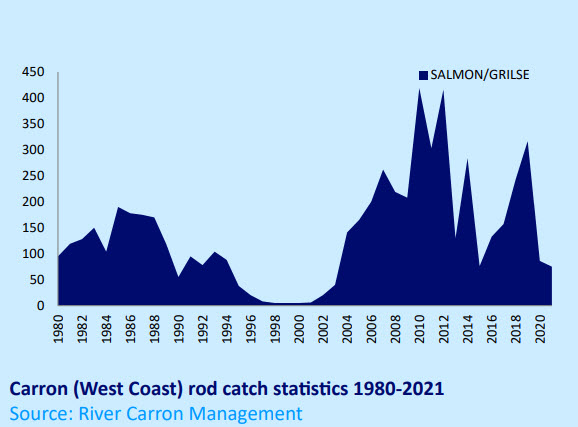 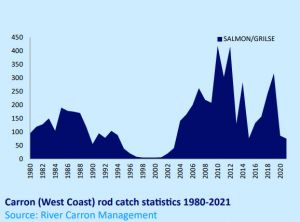 The Good & the Bad: Two stories have come to my attention this week, and both deserve being my first commentary. One is good news and the other bad, but it is the bad news that I will discuss first. I think it is worth beginning by repeating the quote from Andrew Douglas Home’s new book A River Runs Through Me:

“Some will say what follows is rubbish. They would catch and kill as many salmon as they could, all in the name of sport, regardless of the method. They, and their forebears, are the whole reason that the Atlantic salmon is so endangered now. Selfish and ignorant disregard for the wider picture, of a uniquely precious resource, by too many of us humans has led to this. As the only remaining permitted exploiters in Scotland of such an iconic species, we river managers and anglers have the ultimate responsibility. There is no-one else to blame. How we conduct ourselves – and what we now do to protect our wonderful salmon – is how we shall be judged. We are in the endgame. We cannot afford to fail, for the salmon’s sake.”

This week, the Scottish Government announced the latest rod catch statistics for salmon and sea trout from across all Scotland. The headline news is that the total reported catch of wild salmon for 2021 was 35,693 fish, which is the lowest on record. Catch and release accounted for 95% of the total catch. Last year, the total catch was 45,366 wild salmon, a drop of nearly 10,000 fish.

For sea trout, the total catch was 12,636 fish which was also the lowest on record. Eighty-seven percent of the fish were returned. Last year, 13,313 sea trout were caught.

Commenting on the latest data, Alan Wells of Fisheries Management Scotland (FMS) told the Guardian it is now recognised that wild salmon are in crisis and that the latest catch figures underline just how grave the situation has become. He added that not only must the Scottish Government deliver its existing commitments without delay but must ‘go much further in all areas where they have the power to make a difference.’ Before I comment on this, I would mention that FMS have issued a ‘Call to Action’. In this, they urge the Scottish Government to take decisive action to restore ‘our’ wild salmon by:

The eagle-eyed of readers will notice that nothing in this call to action actually applies to anglers. As usual, this call to action is about everyone and everything else but salmon angling.  The angling fraternity have never accepted any responsibility in salmon’s decline, which is why Andrew Douglas Home’s comments which I repeated at the start of this commentary are so refreshing. It is also worth bearing in mind that Mr Douglas Home is very much part of the salmon fishing establishment.

Returning to Dr Wells’ comments that the Scottish Government must go further in all areas where they have the power to make a difference, then there is something that they can do and more importantly they can do it right now.

One aspect of the catch data that is not mentioned in the FMS or any other press release and is buried far down in the body of the catch data report is that in 2021, anglers killed 1,619 wild salmon and 1,600 sea trout for sport. I appreciate that this number is a shadow of the number that used to be killed but then the head of the fishery boards was not then arguing that wild fish populations are in crisis. If wild fish are in crisis, why is the killing of any of these valued fish permitted?

It is even more puzzling that when the river managers’ organisations are saying that wild fish are in crisis, Scottish Government scientists have judged that a total of 72 fisheries in Scotland are of sufficient conservation status that killing fish is allowed?

Surely, the salmon conservation grading system should now be shelved and that all rivers be deemed as catch and release only and the killing of any wild fish deemed to be not only unacceptable, but illegal.

The angling sector have always argued that the level of catch and release is so high that it isn’t necessary to make it mandatory but they fail to realise that it is not the number of fish that are killed that is important but rather the message that is given out if catch and release is made mandatory.  Killing salmon is just unacceptable and it would be thought that such a message would be welcomed by all the wild fish organisations who now claim to be conservationists.

Finally, I mention again that FMS have urged the Scottish Government to deliver on their commitment to the Wild Salmon Strategy. At the time the Strategy was published I wrote that it failed to address the underlying issue of declining salmon populations and therefore would never deliver a recovery of wild salmon populations in Scotland. This is because the Strategy was drawn up by the same people and organisations that have overseen the decline over many years.

The fundamental problem is that wild salmon are failing to return to Scottish rivers. In the 1980s, 20-25% of salmon returned. Today the number is about 3%. This decline began as long ago as 1971 as identified by ICES as commissioned by NASCO. Because there has always been plenty of fish for anglers to catch, there was never any incentive to learn why increasing numbers of fish did not return, so for 50 years no-one bothered to try to find out why and this is why today we still don’t know. By the time we ever find out the answer, there will be no salmon left.

I will be carrying out my own analysis of this latest catch data and will report back on my findings in  a future issue of reLAKSation.

The Good News: This week I was invited to attend a meeting of the River Carron Conservation Association in Edinburgh to announce the results of the first phase of their DNA research as carried out by the University of the Highlands and Islands.

I have known Bob Kindness, who has been the driving force behind the restoration of the River Carron, since the late 1980s. You will never find a person who is more passionate and more devoted to a cause than Bob and the River Carron has been Bob’s cause.

When Bob moved to Kishorn, his arrival coincided with some of the worst river spates encountered. In the years 1988 to 1992, the river flows were 337, 202, 213, 178 and 253. This ensured that for year after year, any eggs, and probably any hatched fish were simply washed out of the river. This meant that in subsequent years, there were fewer and fewer fish returning to the river simply because there were no new fish coming out of the river. In 1998, the fisheries biologist James Butler, carried out an experiment with beads and found that even at a river speed of 120, these were washed away.

As a keen angler, Bob knew he had to do something to help the river recovery, so he built a hatchery (a covered tank in a field that was gravity fed) and slowly embarked on a strictly monitored restocking programme and despite many critics, it worked as illustrated by the following graph taken from the latest FMS annual review.

Bob has kept detailed records of the fish in the Carron and more recently has taken fin clippings for possible DNA analysis. Although the Carron project is run on a shoestring budget, sufficient funding was raised to undertake DNA of the first batch of these clippings and the meeting this week was convened to announce the results.

Hatcheries are contentious issues. A couple of years ago, The Scottish Government introduced a new policy on stocking which permitted the restocking of eggs an unfed fry for conservation reasons, not to improve the fishing. This is even though the most successful part of the Carron project has been with restocking fed fry.

However, it is the DNA results that really demonstrate the success of this restocking programme The following image shows that the percentage of hatchery smolts is repeated in the returning fish. The hatchery fish (red/orange) are returning to the Carron just as successfully as the wild spawning fish (grey). 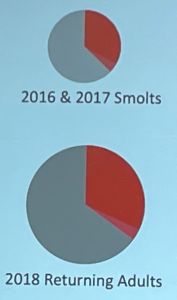 One of the aims of the meeting in addition to reporting the results was to seek more funding to allow all the fin-clipped samples to be tested. Given the threatened state of salmon stocks, the ability to successfully restock rivers has national significance.

Sadly, the success over many years of the Carron project has not been welcomed or recognised by the wider angling community. Bob has in the past acquired second hand equipment from the salmon farming industry and this connection has been inferred as salmon farmers trying to manipulate the wild sector. At the same time, some anglers believe that they can only demonstrate their prowess at fishing if the fish they catch are truly wild fish and finally, because hatcheries are akin to farming, claims have been made that hatchery fish are inferior to wild.

Bob’s project is one possible solution to declining wild stocks. If the wild sector don’t now go running to Bob’s door then they have only have themselves to blame when there are no fish left.

Finally, there were representatives from Marine Scotland in attendance at the meeting but despite holding such strong views on their restocking policy, no questions appeared forthcoming.

NASCO: The 39th Annual meeting of NASCO is taking place this week at the Dalmahoy Hotel and Country Club in Edinburgh. This somewhat archaic organisation is meeting at a time when Scottish salmon catches are the lowest ever and when similar declines are happening across the whole of salmon’s range. Yet one of the main proposals to be discussed will be the production of a systematic review of the effect of salmon aquaculture on wild Atlantic salmon populations (https://nasco.int/wp-content/uploads/2022/05/CNL2207_Proposal-for-the-Production-of-a-Systematic-Review-of-the-Effect-of-Salmon-Aquaculture-on-Wild-Atlantic-Salmon-Populations.pdf). This will primarily cover the impacts of sea lice and of genetic introgression and will cost an estimated €83,000.

It is puzzling why this review will cost so much given that it is clear that some of the ‘experts’ appointed by NASCO will simply rehash the same old ‘biased’ narrative that we have heard time and time again. It is only necessary to see the papers quoted in the proposal’s preamble to see what the review will say. As far as I can see only one member of the group does not have a paper quoted.

Yet again, NASCO aren’t interested to include anyone with an aquaculture background who can provide a balance to the review. In addition, four of those selected as experts come from just two institutions, one in Norway and the other in Canada. The numbers are made up with another person from Norway, one from Maine (USA) and coordinator from Ireland.  Couldn’t NASCO find a scientist with anti-salmon farming views from Scotland to join the group?

The aim of this proposal is to produce a manuscript for submission in a high impact scientific journal. Why would NASCO do this unless they have already made their mind up about salmon farming, which of course they have.

It will be interesting to hear the outcome of the whole event. I fully expect that given the perilous state of all salmon populations that as a conservation organisation, NASCO will want to see a total ban on the exploitation of wild salmon, whether commercially or recreationally.