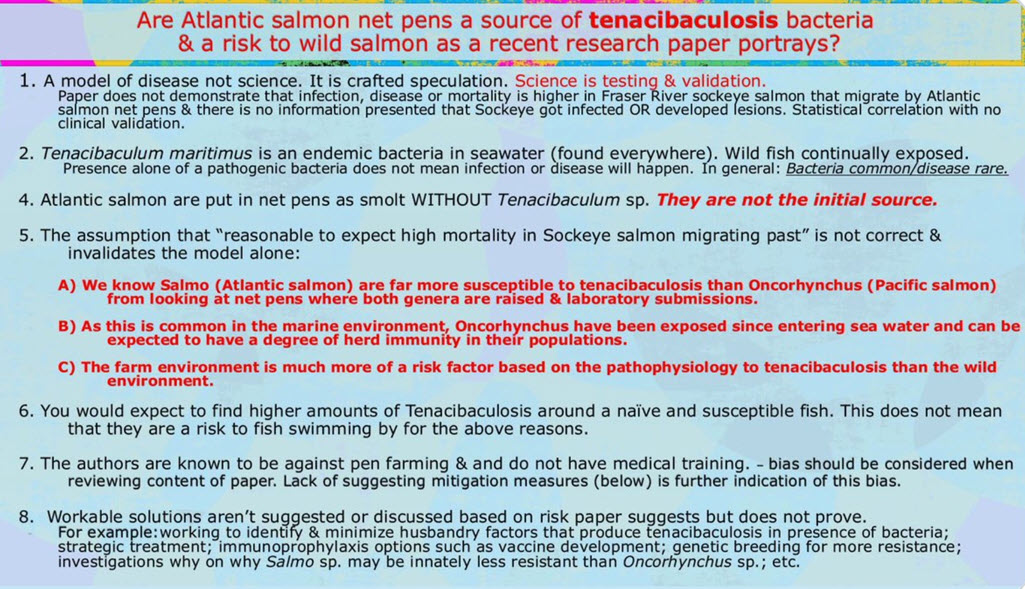 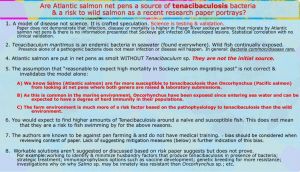 Canadian Science: The Canadian anti-salmon farming lobby is currently attempting to obtain as much media coverage about the negative impact of salmon farming in the run up to the Government’s decision on whether to renew salmon farm licences or not.

Recently, the Canadian Government’s Standing Committee on Fisheries and Oceans (FOPO) took evidence from a range of witnesses about the status of salmon including from Dr Andrew Bateman representing the Pacific Salmon Foundation (PSF). Dr Bateman spoke about how the decision-making process relating to the presence of salmon farms was flawed and that there is a need for a truly independent body to assess and review the science about wild and farmed salmon. This echoes similar recommendations within other national salmon farming areas.

Dr Bateman told the committee that he had participated in some of the risk-assessments of farms around the Discovery Islands. Consequently, the view of PSF that the findings show that there is minimal risk reflects neither the current state of knowledge nor the true scientific consensus. In their view, this is because key risks were omitted including that from sea lice. Dr Bateman also claims that the risk assessment was neither unbiased nor independent.

Of course, this view simply reflects the fact that the assessment didn’t agree with Dr Bateman’s or the PSF’s position on salmon farming. Dr Bateman is a long-time associate of Alexandra Morton and the Salmon Coast Field Station, so his views are not expected.

Dr Bateman has received a good share of the recent media coverage due to his position as lead author of a new paper that states salmon farms are a likely source of Tenacibaculum bacteria in migrating Fraser River sockeye salmon. Dr Bateman’s co-authors include a who’s who of the anti-salmon farming lobby including Martin Krkosek and Kristi Miller.

It’s likely that Dr Bateman would expect an independent review panel might place greater credence to his claims that pathogens from salmon farms are impacting wild salmon in the Fraser River. Given the previous claims coming out of the Salmon Coast Field Station, it is surprising that there are any wild salmon left to be infected by this bacterium since sea lice and PRV should have already wiped them out.

Hugh Mitchell DVM, a fish veterinarian and regular commentator on social media, posted the following commentary about this paper on Twitter:

At the same time, my own research is showing that claims about the impacts of sea lice are simply not proven. As discussed in a previous issue of reLAKSation, the data collected by the Salmon Coast Field Station does not even support their claims with the majority of fish sampled being lice free and very few fish carrying many lice. 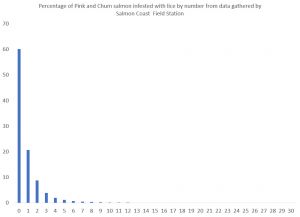 Unfortunately, the anti-salmon farm lobby use a few selected pictures in the media with the intention of shocking the public. Yet, I have been through their data and cannot find any sampled fish with lice levels that match these pictures. Unfortunately, the pictures do not come with information about when and where these fish were sampled.

There is a clear need to separate the science from any activism or campaigning and base any decisions about the future of salmon farming on actual science and not activism. This is why independent scientific review is now so urgently needed and not just in Canada.

Funding: I mentioned in reLAKSation no 1074 that Fisheries Management Scotland had somewhat belatedly published their annual review for 2022, despite the fact that much of the catch data supplied was still provisional. Without this data, the review has little value as it just repeats what has been said in previous years, especially how wild salmon need to be protected from the salmon farming industry.

Last year, there was a new addition to the pages of the review and that concerned who funds FMS. Due to the pandemic and other matters, I didn’t really take note of how FMS are funded, but given the lack of any other hard information, the information about funding jumped out of the page.

In the last financial year, 44% of FMS funds came from member subscriptions. Seemingly, this was down on the previous year (as a percentage) because members argue that as there was reduced fishing income, their subscriptions should also be reduced. Another 11% of funding came from the Missing Salmon Alliance but where this money originates is unclear given that the member organisations are mostly charities and not-for profits. The remainder comes mainly form Marine Scotland who seem to be funding a private limited company whose nature of business is ‘freshwater fishing’.

The remainder of the funding 46% comes from the Scottish Government (31%) and the Crown Estate (15%). FMS say that £540,000 was distributed to their members, presumably coming from Scottish Government and the Crown Estate. This is not included in the FMS accounts which can be accessed on their website. These accounts show an income of £176k which must equate to the 44% member subscriptions. The accounts declare another £87k which could be from the MSA and funding of the Interactions Manager role. However, if all this is added together with the money distributed to the members, it doesn’t seem to add up. I am not an accountant, but I am sure FMS can explain how the actual funding relates to the pie chart published in the review.

What FMS do with their member’s funding is their business, but what is of interest is the £540k of Scottish Government and Crown Estate funding. With regard to aquaculture, FMS receive three tranches of funding, the first of which is for aquaculture and wild fish interactions. It is already well known that Marine Scotland provide about £45k to pay for an Interactions Manager. I initially thought that this role was for an intermediary who would liaise across both sectors helping improve communication and understanding but I was wrong. It seems that one of the key roles of this Marine Scotland funded manager has been to help members object to planning application for new farms in order to be as protective of wild fish as possible. The fact that Scottish Government funding is being used to object to activities that are being encouraged by the Scottish Government is beyond understanding. If FMS want to be protective of wild fish, then perhaps they should encourage their members to leave them in the water undisturbed because salmon farms are not the reason why wild fish are in decline. Perhaps if FMS and their interactions manager would be willing to actually discuss the issues then they might learn that their current efforts against salmon farming are a total waste of time.

The second beneficiary of Marine Scotland funding is the sweep netting programme which the Scottish Government continue to fund having done so for many years. This programme is aimed at showing the damaging impacts of salmon farming but has consistently failed to do so. Unfortunately, the programme continues because the results are incorrectly analysed. It doesn’t help that much of the data generated is worthless simply because the netting protocol is ignored with many samples falling well below the recommended minimum sample size. This minimum is even questionable as the recommended number is insufficient to arrive at any conclusion.

The third beneficiary is another project to determine the netting protocol for fyke rather than seine netting. This is not a new project but one that began about five years ago because fyke netting was considered to be more effective at sampling than seine netting, which says something about the last twenty or so years of seine net sampling. I have recently written about the success of fyke netting and found it to produce the same results as that obtained by seining. Whichever nets are used, the results show that sea lice are not the cause of the decline of wild fish, something that SEPA’s Peter Pollard confirmed to the Scottish Parliament’s REC Committee some time ago.

Sadly, it does seem that the narrative about sea lice and salmon farming is so entrenched that Marine Scotland continue to fund activities aimed at trying to show the deleterious effect of the industry. In the same vein, SEPA still seem intent on imposing the flawed risk assessment on the salmon farming industry even though their head of ecology has publicly acknowledged that salmon farming is not to blame.

Instead of this line of funding, perhaps the £540,000 distributed to FMS members could have been used to initiate a proper independent scientific forum to discuss why salmon are in decline.

Conservation?: Magnus Linklater, columnist in the Times newspaper has just written about Andrew Douglas-Home (Former Prime Minister Sir Alec Douglas-Home was his uncle) and his new book A River Runs Through Me, about his famous family and his inherited stretch of the River Tweed. The Times (on-line version) calls Andrew a conservationist, but having read his weekly blog – Tweedbeats – over recent years, I tend to rather believe the subtitle of the book – A life of salmon fishing in Scotland. Personally, I am not sure when anglers were renamed as conservationists. Their conservation efforts are solely to ensure that there are more fish in the rivers to catch.

Mr Douglas-Home offered the Times a number of steps that should be taken to save salmon including that fish farms to be relocated out of the sea and onto land. Given that the River Tweed is as about as far from salmon farms as it is possible to get, salmon farms cannot be responsible for the massive decline seen in River Tweed catches seen in recent years, although from what I can see salmon farms receive just one mention in the book. He mentions the fishing on Skye and says that it is a shadow of its former self, but the collapse was suspiciously coincidental with the arrival of salmon fish farms with all their well-known escapees, disease, sea lice and other issues. I once responded to a comment about salmon farming that Mr Douglas-Home had made in his blog. He dismissed my comments by saying he had visited the west coast and seen the evidence for himself. I presume that evidence was just the presence of a salmon farm. Regardless, it doesn’t explain the collapse of catches from his own river.

Perhaps a better explanation can be found in his book at the start of the chapter titled – No Way to Treat a Noble Fish:

“Some will say what follows is rubbish. They would catch and kill as many salmon as they could, all in the name of sport, regardless of the method. They, and their forebears, are the whole reason that the Atlantic salmon is so endangered now. Selfish and ignorant disregard for the wider picture, of a uniquely precious resource, by too many of us humans has led to this. As the only remaining permitted exploiters in Scotland of such an iconic species, we river managers and anglers have the ultimate responsibility. There is no-one else to blame. How we conduct ourselves – and what we now do to protect our wonderful salmon – is how we shall be judged. We are in the endgame. We cannot afford to fail, for the salmon’s sake.”

I am not sure that I can add anything to that!