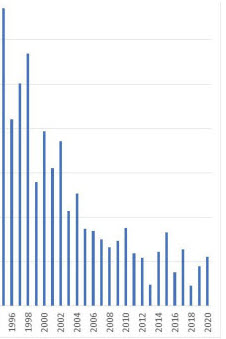 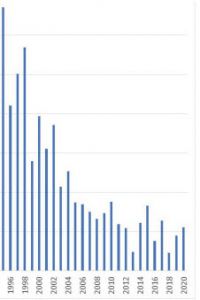 Loch Maree revisited: Salmon & Trout Conservation recently tweeted that salmon farms are a breeding ground for sea lice which have a devastating impact on wild fish. This was part of yet another fund-raising exercise. Seemingly, mention of sea lice is all it takes to induce their membership to dip their hands in their pockets. The fact that there is no firm basis in S&TC’s claims appears to make little difference. As the years pass by, the foundation of their narrative is being slowly eroded away so it’s not surprising that S&TC simply refuse to acknowledge any emerging developments.

A few years ago, S&TC made a short film about the impact of sea lice, specifically about the demise of the Loch Maree sea trout fishery. The film was later updated to include an introduction by TV personality Jeremy Paxman and posted in January 2019.  The video can be viewed at: https://www.youtube.com/watch?v=AawqvXqIa5M&t=3s

Loch Maree has been of interest to me since I started to research the claims made by the angling sector as it was the subject of one of the first papers about the impacts of sea lice in Scotland. The loch subsequently became one of the main emblems of the fight by the wild fish lobby against salmon farming.

The main narrator of the film is Dr Craig MacIntyre, then a director of the Argyll Fisheries Trust. I have transcribed some of his comments below (in italics) about which I would like to respond.

Salmon farming has had a huge impact on sea trout fisheries on the west coast of Scotland and the evidence for this is pretty overwhelming.

As regular readers know, I have been delving into the data set of sea trout sampled by the various west coast fishery trusts and analysed the infestation levels of sea lice of the nearly 65,000 fish recorded. The latest analysis is of fish sampled in Loch Ewe. The data set runs from 1997 to 2019 but there are gaps such as 2001 and from 2004 to 2006. Why this data is missing is unclear.

The graph of this analysis from 619 fish is shown below: This is expressed as the infestation for each fish as a percentage of the total number of fish caught. Yet again, the graph is a classic aggregate distribution. 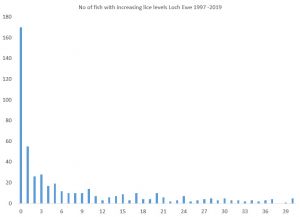 Many of the fish caught were lice free which rather suggests that rather than having a good chance of being infested as Dr MacIntyre stated, most sea trout are likely to be not infested at all or have lice counts well below the level for claimed mortality.

Simply, the actual sea lice data does not support any of the claims made by Salmon & Trout Conservation and the wider wild fish sector. How many more of these graphs are required before there is a proper discussion.  I would argue that the Salmon Interactions Working Group should be recalled, and this evidence should be properly discussed rather than being buried as before.

Dr MacIntyre repeatedly refers to the importance of large mature sea trout to the fishery during the film:

Although I referred to this in my book – Loch Maree’s Missing Sea Trout, I will repeat the graph here, the data for which was taken from the Loch Maree Hotel catch book. The farm was registered in November 1987, which was after catches of 3lb plus fish had increased during the 1970s and then had plummeted. 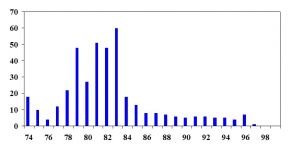 Finally, Dr MacIntyre refers to the bottlenecks that cause fish populations to collapse: He stated:

When we’re dealing with a collapse of a fish population it is important to identify the bottle neck in production – what is it that is causing the problem – all the evidence that has been collected from the Loch Maree fishery points towards sea lice from aquaculture being the problem – therefore if you remove the problem, you should allow the sea trout to recover.

Dr MacIntyre has moved on from Argyll and is now director at the Esk Salmon Fishery Board. What is interesting is that the River Esk used to be a really good sea trout river with a peak catch of around 3400 fish in 1996. Since then, catches have collapsed to 198 in 2020 with a ten-year average of 538 fish. This collapse of the South Esk sea trout fishery can be seen in the following graph:

Although I have looked at the limited information that is published about the River South Esk, there is no mention as to why this sea trout fishery has collapsed or what is being done to help the fish recover. What is clear is that this fishery does not seem to be on Salmon & Trout Conservation’s radar. Certainly, S&TC have not made a video to explain this collapse nor have invited a TV personality to highlight it.

Canada: I just want to acknowledge the news from Canada regarding the outcome of the judicial review into the closure of 19 farms around the Discovery Island.  The judge found that the Minister breached procedural fairness when she announced the closures in a press release and failed to explain the reason for her decision.

The judgement has been widely discussed in the industry media and is very welcome.  However, the mainstream press has been slow to take up the story as observed by industry advisor Mary Ellen Walling. She said that its about being fair after all. The media is often quick to report stories that are negative yet drags it feet about good news stories. This is not just in Canada.

Meanwhile, chief anti-industry proponent Alexandra Morton initially wrote that the decision is not a great look for the salmon farm industry – sue your host country to force your industry into the world’s biggest wild salmon migration route… and for what?

She then continues that it’s like the movie Groundhog Day – all this means is that the minister has to make the decision over again.

However, its nothing like Groundhog Day because this time the Minister will have to consider the science and consult with others before making a decision rather than relying on the word of those opposed to farmed salmon. Equally, opting to sue for a just decision reflects a country that is a free democracy rather than some narrow-minded dictatorship. As it happens, the news just broke that Kellogg’s is to sue the UK Government over its recent decision on retail sales.

Ms Morton subsequently released a short video in which she says that the judgement is confusing especially as the industry went to such an effort to achieve so little. She continues by implying that the previous minister was surrounded by staff who undermined her by withholding information from her in particular that the farms were infecting Fraser River sockeye with bacterial disease killing up to half of them. Together with an issue about licences, Ms Morton, claims that the Minister was thrown under the bus. All this means, as already stated, is that the next Minister must make the decision all over again.

Ms Morton says that the Fraser River salmon have collapsed and are now just 2% of what they were. She asks whether the Norwegian companies should be allowed to continue ‘holding their grip’ on the BC coast and infect the waters until the salmon in the pens are the only salmon left on the BC coast.

What Ms Morton continues to ignore is that there could be many other reasons why Fraser River salmon are a shadow of their former numbers and that whilst she continues to focus on salmon farming, she is simply deflecting attention away from understanding what is really causing the loss of these fish. She has repeatedly ignored the fact that salmon stocks in areas away from salmon farming are also in deep trouble.  Currently, Ms Morton and her colleagues remain the biggest threat to the future of wild salmon in Canada.

Aviemore: It’s the Scottish salmon farming exhibition at Aviemore next week and I will be there on the first day and look forward to saying hello to friends old and new.

Unfortunately, I will miss the opportunity to tackle salmon farming critic Don Staniford who some weeks ago said that he will be there too protesting against the industry. However, he has not mentioned his attendance since so perhaps, he has changed his mind. After all, it is one thing to skulk about on someone’s property at dawn or dusk or even protest outside an isolated feed mill, but something else when everyone who passes by will be from the industry and ready to challenge him.

I guess we’ll have to wait and see.

Meanwhile, no word from the handful of very vocal critics who hide behind social media. Here is their opportunity to have their voice heard in person but I doubt any of them have the ‘bottle’ to attend the exhibition.

A regular reader directed me to look at a Twitter exchange in which it was pointed out that one of the more vocal critics had tweeted over 8,000 times and that this level of activity could only be achieved by someone paid to tweet (because of the incredible time commitment). This critic ignored the question and deflected the thread towards something else. The critic was also offered the invitation to meet at Aviemore.

However, it struck me that this critic must be considered an amateur by comparison to someone who tweets as Salmon Scotland, although this has been one of many aliases used. This account has tweeted over 18,500 times about the ‘evil salmon farming industry’. This must be a full-time job.

I would offer to meet these critics at Aviemore, but I doubt they will be there. I have previously offered to meet them face to face for an informal chat and they have all refused outright. This is because they have nothing to say except to repeat the same message that salmon farming is bad.

And what about those who are paid to campaign against the industry? For example, will Salmon & Trout Conservation be at the show? Surely, if they feel so strongly about the industry, then this is an opportunity to be at the heart of it and to make their views known.

I have found that it makes no difference as to whether it is a leading scientist from Norway or the most vocal critic, they all have one thing in common and that is their unwillingness to engage in a proper discussion about the issues. Seemingly, they all have their narrative, and nothing is going to persuade them otherwise.