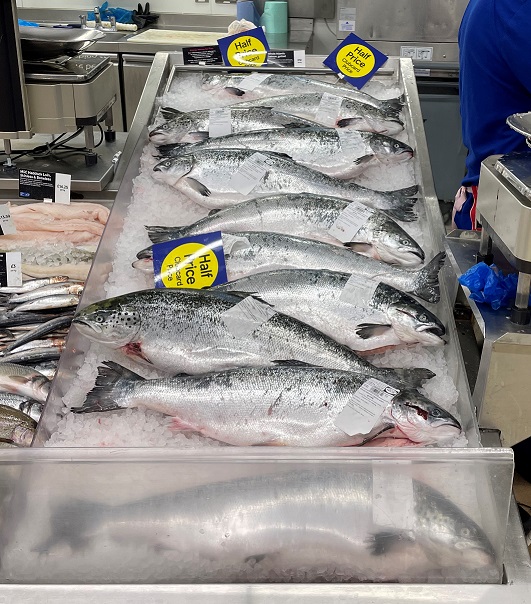 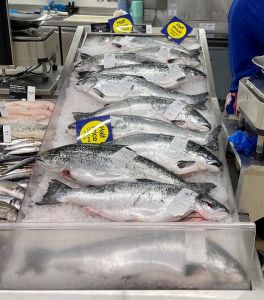 Easter prices: Salmon Business reports that in the run up to Easter, the Norwegian spot market for whole salmon is averaging at about £9.25/kg across a range of sizes. One exporter described the current market is ‘bloody’.

Increasing demand for Easter, together with the conflict in Ukraine, have combined to push prices above levels never seen in recent years. Added to the mix are the export barriers caused by Brexit that hamper the free flow of fish from Scotland to Europe.

However, any Norwegian exporter looking for a bargain should consider flying over to the UK. This Easter Asda are selling whole fish at £5.90/kg, Morrisons at £5.99/kg, Tesco at £6/kg whilst Aldi have whole Scottish salmon on offer at £6.99/kg.

It’s worth remembering that whole salmon is priced as a loss leader at Easter to attract customers into store. This is not unique to salmon, as Asda are offing leg of lamb at just £6.50/kg, which is half price. Morrisons’ lamb is £6.49/kg, as is lamb from Lidl. Tesco’s lamb is priced at £6.75/kg whilst Sainsburys have a third off their normal price at £8.66/kg. Cheapest of all is Aldi, where leg of lamb is priced at £5.95/kg.

Salmon is as popular as ever, not just as a holiday treat. However, it is at these holiday times, such as Easter and Christmas, when whole fish appears in store. At other times, whole boneless sides are likely to be more popular for family gatherings.

Faux salmon: Salmon Farming Expert reported on the rising tide of alternative seafood.  Apparently, there are now 45 companies worldwide involved the production of plant-based ‘seafood’. These companies are producing analogues of a whole range of species including salmon. Plant -based versions of fish products do not seem to have attracted much attention in the UK market, with most products offered as an alternative to meat. It was therefore interesting to come across a headline stating that Vivera’s Vegan Salmon Fillets are now in Tesco at cheaper price than conventional salmon.

The article appeared in the vegan business magazine – Vegconomist and presented a challenge that I could not miss.

The vegan salmon fillet was launched in the Dutch fishing village of Volendam where it was apparently served to the most critical fish lovers to critical acclaim. The fillet is created from wheat protein with added omega -3. It is said to have a fatty bite and a flaky structure which falls apart like normal salmon. The company say that they have invested a lot of time and effort in development, and they believe that they have achieved a mouth feel that is very close to salmon. They have also said that meat substitutes are more expensive that meat so that as this product is cheaper than the real equivalent, the price is expected to drive sales. In Holland, the salmon alternative is priced at €3.49 (£2.91). However, according to Vegconomist, in Tesco, the price will be £3.00 compared to £3.79 for two salmon fillets. 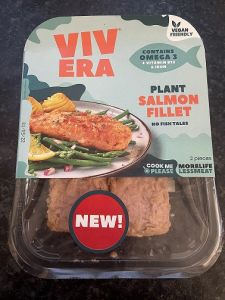 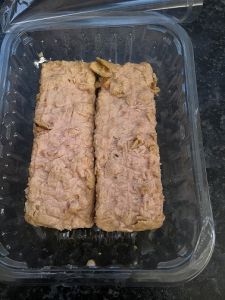 Unfortunately, the manufacturer, Vivera and the vegan business magazine, do not seem to have done their research. The pack of Vivera salmon style fillet weighs 200g and is priced in Tesco at £3.50. This is equivalent to £17.50/kg.

Tesco’s two salmon fillets do cost £3.79 but the pack size is 260g. This is equivalent to £14.58/kg. This means that the plant-based product is 20% more expensive that the real salmon, not cheaper as claimed.

The question is whether it will tempt salmon lovers to transfer to a plant-based alternative? 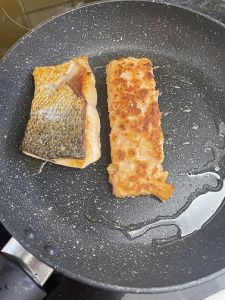 I suspect that if this faux salmon fillet is offered for tasting on its own, then there might be some level of acceptance. However, if it is taste tested against salmon, then the reality is that it doesn’t look like salmon, taste like it, or eat like it. The question is why is there any need to produce a plant-based me-too salmon product at all? Just make a plant-based meal choice that stands on its own. I am sure that there will be a market for this product from those who choose to eat plant-based products, but will it tempt those who eat salmon to change to this alternative. I doubt it very much.

Lost direction:  Seafood Source report that the latest ratings issued by the Marine Conservation Society (MCS) have irked the UK seafood industry. This is because a number of popular varieties of fish and seafood have been added to the ‘Fish to Avoid’ list. These include brown crab and lobster, which the MCS say are suffering because of poor management with no catch limits in place. By comparison, herring and sardines have been added to the lists as ‘Best Choice’.

The Scottish Fishermen’s Federation (SFF) have said that the latest changes are what we can come to expect from an organisation that would prefer that wild capture fishing didn’t exist. They claim that the ratings are based on information that has been cherry picked to suit their narrative. Meanwhile, Seafish say that whilst they acknowledge that the MCS’s Good Fish Guide is helpful to consumers, the ratings must be based on the most accurate and up to date information.

I have some sympathy with the SFF because clearly MCS have their own agenda when it comes to fish and seafood. I would disagree with Seafish in that the MCS’s Good Fish Guide is helpful to consumers, and nor am I convinced that their advice is based on the most accurate or up-to date information.

I suspect that very few consumers actually use the Good Fish Guide at all. I have only once seen reference to it in any retailer. This was on the fishmongers’ counter at a franchised supermarket chain. The store had stuck a colour guide onto the wall next to the counter and each fish label had an appropriate colour dot attached. The store eventually realised that the colour dots were highlighting fish that the MCS considered unsustainable (even though the same fish were widely available across the whole retail sector,) so they removed the guide and the coloured dots.

The online version of the Good Food Guide is certainly today. I can illustrate this using the example of salmon. Their website (https://www.mcsuk.org/goodfishguide/) provides a search facility and If the word ‘salmon’ is entered there are seven results. Four are salmon – Keta, Red, Pink and Atlantic. There are three others – Abalone, Spurdog and Spotted ray!!! I would imagine that Spurdog is highlighted because in fish and chip shops it used to be widely known as Rock salmon, but Abalone and Spotted ray’s appearance in this search is a mystery.

Any consumer would be immediately confused – this entry is about Keta salmon, and it talks about Chum and references Pacific salmon.

The second entry is Red Salmon, which usually refers to canned salmon, as does the reference to Pink salmon, although Pink salmon is available in the freezer section. There is no reference to Sockeye, which is how red salmon is usually named when sold as chilled prepack and on the fish counter.

I have occasionally come across coho salmon in the UK market, but this fish is not referenced at all.

Perhaps, any consumer looking at this guide would be less confused if the MCS explained the difference between Atlantic and Pacific salmon and that there are five main species of Pacific salmon.

Although this statement is confusing, the MCS clearly know that Pacific salmon is available in the UK so it is unclear why it doesn’t get an entry as a different species, especially as imported Grouper does. My guess is that the research about each species is a paper exercise and the MCS don’t actually know what is available in the marketplace.

Clearly, Pacific salmon was not just limited to cans.

Finally, in 2002, I couldn’t help noticing that the next entry in the guide after salmon was sand eel, something I can absolutely confirm that I have never seen offered for sale for human consumption anywhere.

Returning to the current guide, MCS say that they use the most up to date information available, yet although they recently announced updates to the guide, the entry for Keta, Red and Pink salmon are supported by research papers dated from 2012 to 2019.

Moving on to Atlantic salmon, it seems that the MCS last accessed data for this species in 2020. Their ratings reflect the typical campaigning charity view of salmon farming that RAS is good and open pen farming is bad. The rational of what makes open pen farming being given the ratings is unclear. For example, open pen farming is rated a 3 irrespective of certification by GAA (BAP) or not.

My view is that consumers aren’t interested what the MCS think because the ratings do not reflect the reality of the marketplace. For example, the spotted ray which comes up when searching for salmon is rated between 3 and 5. The 3 rating relates to the fish caught by bottom trawl around the Bristol Channel (FAO 27 Atlantic North East) whereas the fish rated 5 and are recommended as one to avoid are also caught by bottom trawl but around the west of Scotland and southwest Ireland (FAO 27 Atlantic North East). How consumers are supposed to tell the difference between the two is a mystery, but I would be very surprised if even fishmongers knew exactly where the fish they sell were caught.

If MCS were really interested in the sustainability of fish products in the UK marketplace, they would form a group of fishing industry representatives, academics, etc to assess stocks rather than rely on a small group whose experience appears limited to the campaigning charity sector.

The paper compared consumer responses to two species of shrimp, one of which is preferred by Italian consumers. It is more expensive than the other. After the survey was repeated, after telling participants that the cheaper variety came with an ecolabel, the willingness to pay the lower price increased amongst some of the participants.

However, in my opinion, consumer decisions were influenced by other factors too. The preferred species is locally caught and part of the national identity, whilst the cheaper variety is imported. This makes the reluctance to change amongst other consumers more understandable. The two varieties of shrimp are also of different sizes with the preferred locally caught species being much larger.

In the UK, we see cod as being part of the national identity too which explains why it is one of the top five consumed species and why there is a reluctance to change to other choices.

Finally, this paper reports the results of what is effectively a paper exercise. There is no evidence that consumers will actually change to the ecolabelled species when they come to buy the shrimp at the fish counter. What people say and what people do can be two very different things.

What I find to be of interest is that these new findings were tweeted by the Seafood Innovation Fund (SIF). It seems to me that despite having had funds of £10 million, SIF have so far failed to help the fish and seafood industry develop the market for alternative species landed in the UK. To date, the fund has financed one small project aimed at renaming megrim as Cornish sole. This project appears to have had no impact nationally, mainly because megrim is so rarely seen in the retail sector that it makes no difference what it is called. I would mention though that as part of an Easter promotion, the online retailer Ocado did use the name this week (just). 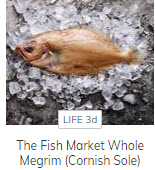 Another worthwhile project aimed at getting consumers to eat alterative species was rejected by the fund. By comparison, funding has gone to projects which are unlikely to instigate any change in the way we eat fish and seafood. It will be interesting to see how many of the projects funded are actually commercialised and have a real impact on the sector. However, I suspect that once the fund has finished giving out money, we will never hear about most of these projects again.