Where to start?: A new paper was published last Monday in Science Advances and is authored by a host of Norwegian scientists whose names are more than familiar to those of us associated with the salmon farming industry. This is because their usual area of work is aimed at demonstrating the negative impacts of salmon farming on wild fish.

However, this new paper is an unexpected revelation that diverts the focus away from the salmon farming industry as the cause of changes to the wild salmon population and directs it instead towards an ecological regime shift in the north-east Atlantic Ocean. The paper considers so much data that it is difficult to know where to start. What is made clear is that the researchers don’t think that the observed changes from 2005 onwards are due to climate change and I believe that they are right. Observations from the Scottish River Tweed going back to 1740 confirm the likelihood that similar changes to salmon populations have occurred several times in the past.

The new paper details the examination of the scales of over 50,000 salmon caught from 1989 to 2017 and shows that after 2004, there was an abrupt decrease in the growth of salmon. At the same time, there was a marked decrease in the proportion of early maturing salmon. Other observations included a 50% reduction in zooplankton and a sudden decline in the growth of Atlantic mackerel. These changes coincided with a considerable decrease in the extent of Arctic water in the Norwegian Sea and a subsequent warming of the spring water temperature.

Whilst all these observations are extremely interesting, the one that stood out for me was the marked decrease in the proportion of early maturing salmon. This is because this fits in exactly with the findings of my recent paper about changes to the stock components of Scottish salmon populations. From the 1950s through to around 2010, the number of grilse caught by anglers increased across all of Scotland. This coincided with a decrease in the numbers of multi-sea winter large salmon. These changes were also observed in the north-west Highlands, where salmon farming is centred. I suggested that the perceived decline in salmon catches claimed by the wild fish sector was actually due to these observed changes to these two key stock components.

Sadly, the wild fish sector completely ignored my findings, which was not unexpected. They are not interested in any research that might undermine their long-held salmon farming narrative. Only Andrew Graham Stewart of Salmon & Trout Conservation provided any comment by saying that ‘over the years, I have manipulated and cherry-picked statistics in support of my warped agenda which attempts in vain to prove that industrial salmon farming has no impact on wild salmon stocks or the wider environment.’ Mr Graham Stewart appears to ignore the fact that my observations are in agreement with those of Dr Ronald Campbell of the Tweed Commission and Dr David Summers of the Tay Salmon Fisheries Board, both well respected members of the wild fish community.

In a paper from 1995, Dr Summers proposed that the observed changes to stock components i.e., increasing grilse catch, declining large salmon catch could be due to abrupt changes in water temperature due to Icelandic Sea ice abundance. This may be related to the decrease in the extent of Arctic water observed in this new paper.

One of the authors of this latest paper is Eva Thorstad, who Mr Graham Stewart commissioned in 2018 to write an anti-salmon farming report (NINA report 1449) – Impacts of salmon lice emanating from salmon farms on wild Atlantic salmon and sea trout. I can only wonder how Mr Graham Stewart is going to explain how Dr Thorstad’s latest findings agree with my own manipulation and cherry-picking of the statistics. It will be interesting to see whether Salmon & Trout Conservation make any reference to this new work. At the time of writing, not.

Dr Thorstad and her colleagues do consider the possible effects of salmon farming in this new work. They say that that largest anthropogenic impact is from salmon farming. It is worth repeating word for word, exactly what they say:

“However, there is key evidence that suggests that the observed decline in growth and the decline in one-sea-winter fish that occurred in 2005 is not mainly driven by impacts of fish farms (i) The steep decline in growth also occurred in the south-eastern region of Norway that was devoid of fish farms. (ii) There is currently no evidence that there was a large shift in aquaculture production, number of escaped farmed salmon, or salmon lice infestation pressure numbers in 2005 across a large regional scale that could explain the patterns observed in Atlantic salmon growth.”

Of course, given the long-time efforts of some of the scientists who authored this paper, it is not surprising that there is some reluctance to accept that salmon farming may not be a driver of change to salmon populations in Norway. They point out that the fish from the south-eastern area of Norway have to swim north past salmon farming areas. They have also adopted a similar approach to Scottish regulators who suggest that these changes suggest even more reason why any impacts of salmon farming, no matter how small, should be reduced further. Such suggestions do not appear to extend to a recommendation that further limits on other man-made pressures such as exploitation should be enforced.

Finally, what should not be surprising is that whilst the wild fish organisations are usually quick to tweet and post details of scientific papers that support their narrative against salmon farming, there has been little mention of this important work. The biggest issue affecting wild salmon today is what happens to the fish whilst at sea. Whilst this paper does not address the wider questions, it does help understand some of the changes that affect wild salmon stocks over long periods of time. This research should be applauded but yet again a paper is ignored because it doesn’t support the anti-salmon farming narrative.

There’s the catch:  Back in May 2019, the Scottish Government published a list of the high level pressures affecting Atlantic salmon https://www.gov.scot/publications/conservation-of-wild-salmon/pages/high-level-pressures-on-atlantic-salmon/ In addition to the inclusion of various aspects of salmon farming, the list includes the exploitation of salmon. 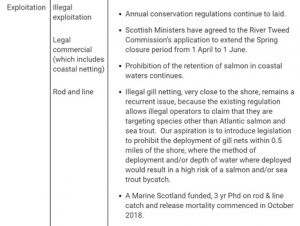 In terms of the proposed remedial measures relating to exploitation by rod and line angling, Marine Scotland proposed to get tough on illegal gill netting and the funding of a 3 year PhD project to look at the issue of catch and release mortality. This began in October 2018 and thus was due to end in October 2020.

During this time, I did submit a request for some information as to the preliminary findings only to be told that I would have to wait for the research to be published, which could be up to four years after the project was initiated. Given that wild salmon are a national priority it seemed that Marine Scotland considered the interests of a student to have a higher priority than wild salmon.

The wild salmon strategy was published in January this year, which according to the Scottish Government set out the vision, objectives and priority themes to ensure the protection and recovery of Scottish Atlantic wild salmon populations https://www.gov.scot/publications/scottish-wild-salmon-strategy/ I had hoped for mention of the results of this study in the strategy but the published document contained just a small reference to exploitation.

The only reference to catch and release mortality was that it could be exacerbated by high temperatures, but this is something that has been known for some years from other studies. Could this be the sum total of knowledge from three years of research?

Having heard nothing about this work and seeing no reference to it in the wild salmon strategy, another FOI was submitted requesting information about the findings. The response was received this week mentioning that the information was already in the public domain. It turns out that the paper of this work was published in July 2021.

The findings of this study were that whilst typical catch and release might not necessarily lead to immediate lethal effects, there were a range of important sub-lethal effects that could potentially impact the fecundity of salmon. There was evidence that the stressors of  catch and release influenced the reproductive capacity of both male and female salmon. In addition, fish that experienced exercise and extended exposure to air (120 seconds) suffered the fastest growth of the fungus Saprolengia. The authors conclude that whilst catch and release is clearly an improvement over killing fish, however the time period and conditions under which fish are angled should be taken into consideration for regulations and management of catch and release. Of course, the way fish are handled by individual anglers can vary significantly and photographic evidence of fish caught even this year show that the advice on handling fish is often ignored, thus the conclusions arrived at by the authors of this paper may be somewhat conservative in the estimation of the impacts of catch and release.

The paper’s conclusions are very different to the statement in the wild fish strategy that mortality can be exacerbated by high temperatures. This seems to ignore the fact that fish health and reproductive capacity can be compromised by catch and release. The comments about fungus are extremely relevant as I understand that it is not uncommon for anglers to catch fish that are showing signs of fungus infections in front of the caudal fin often in the shape of a human hand.

The question is why does the wild salmon strategy appear to ignore the findings of this Marine Scotland funded study?  Why too doe the Scottish Government website, through which other studies are posted, appear to have no reference to this work. The link provided by the response to my FOI request is to a University of Glasgow website and not to Marine Scotland – Simulated pre-spawning catch and release of wild atlantic salmon (Salmo salar) results in faster fungal spread and opposing effects on female and male proxies of fecundity – Enlighten: Publications (gla.ac.uk).

However, there is a clear link between this work, Marine Scotland and the wild salmon strategy. There is therefore no excuse that the risk to wild fish from catch and release was not recognised and understood. The authors of the paper extend their gratitude to John Armstrong and Nora Hanson of Marine Scotland for their constructive feedback whilst the minutes of the wild salmon strategy working group meetings lists Dr Armstrong as a member in attendance.

I have written previously that this wild fish strategy would be better described as the wild fisheries strategy with the protection of salmon fishing appearing to be more important that the protection of wild salmon. The fact that the findings of this study appear to have been ignored would simply confirm this view. The fishing season for many Scottish salmon rivers can continue for many months. The River Tay season runs from 15th January to 15th October leaving just three months for the fish to breed. Nature Scotland say that breeding can run from October to February especially in the larger rivers.

Perhaps to safeguard wild salmon, the fishing season should be standardised and reduced from nine months to five to ensure that fish are left undisturbed for long enough to ensure the maximum reproductive success.

WISA: This week I was privileged to attend the meeting celebrating Woman in Scottish Aquaculture which coincided with International Woman’s Day. I would hope that the aquaculture industry of which I am proud to be part of, is fully inclusive to anyone and everyone who wants to be involved in this exciting industry. There is no place for any form of discrimination. WISA is certainly taking a positive stand to give everyone equal opportunities and this should both welcomed and widely applauded.