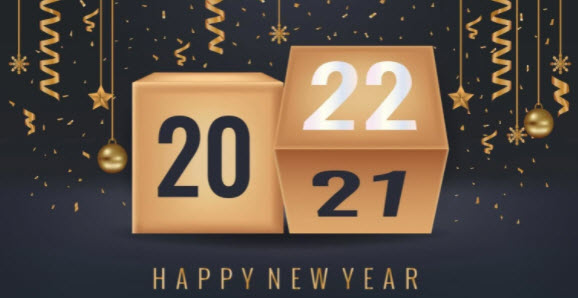 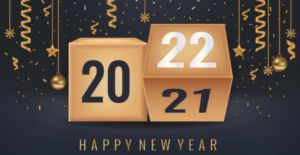 New year- New thinking: As we enter 2022, it appears that the International Committee commissioned to evaluate the Norwegian Traffic Light System (TLS) have delivered their final report. The committee appear to suggest that the current modelling has many shortfalls. One comment states that it is clear that there are a number of places within the TLS where uncertainty is present. They say that this may be the result of lack of access to adequate data or simply the inherent randomness associated with the biological and environmental variables being modelled. For me, this is the real issue about the use of models to predict the impacts of salmon farming. The natural world just has so many inherent variables that nothing is certain. In addition, models are only as good as those who build them and, in my opinion, those who work on the TLS are not exactly open-minded on their opinion as to the impacts of salmon farming on wild fish.

Two of the recommendations relate to the estimated mortality used in the models. The committee recommends that the mortality estimates be regularly reviewed rather than relying on estimates calculated over a decade ago. They also say that the work used to estimate mortality should be reviewed and more attempts should be made to obtain data on the in-situ effects of sea lice infestation on wild salmon at individual and population level. I will return to this later in this commentary. Meanwhile, I look forward to the report’s release into the public domain.

Mortality estimates are a contentious issue and have been ever since the models were first proposed. The debate as to how relevant the estimates used in the TLS are to the real world continued throughout 2021, even whilst the International Committee undertook their deliberations. Kyst.no recently published a commentary that highlighted the contentiousness of this issue.  This focused on a paper published by Johnsen et al published in December 2020. The authors had developed a post smolt migration model relating to 401 Norwegian rivers. They concluded that mortality of post smolts exceeded 30% in 84 rivers and was between 10 and 30% in another 140.

Following publication of the paper, another paper appeared that questioned the original work suggesting that the mortality estimates used were far too high and consequently so were the mortalities quoted for the 401 rivers.

In response, the original authors published another paper dismissing the criticism at which point the journal – ICES Journal of Marine Science – closed the debate. The two authors Jansen & Gjerde used Kyst.no to respond to Johnson’s denouncement of them. The debate between the two sides is detailed and complex and is not something I want to cover here.

Instead, my comments consider the point made by the International Committee about the variability of the biology and the environment and how they relate to such modelled conclusions as appear in these papers.

In their paper’s abstract, Jansen and Gjerde highlight that Johnson et al. state that “The estimated lice level on modelled post-smolts is shown to coincide with the level observed on captured wild post-smolt”. This is because they have access to data from the Norwegian surveillance programme of migrating salmon caught by trawl in areas around the Norwegian coast.

Links to this data mean that I have been able to access the data for myself and having removed everything except wild salmon smolts I have a database of 8,419 fish caught from Norwegian fjords between 2017 and 2020.

Despite repeated claims, based on various models, that salmon farming is destroying the wild salmon population, I prefer to look at actual evidence of the wild fish population itself. This trawling data provides a unique opportunity to see the infestation of sea lice in wild salmon in Norwegian waters. This also takes into account the fact that there is a natural sea lice infestation of wild salmon that has nothing to do with farming.

The data records how many sea lice, of all life stages, are present on the post smolts that have been caught. I have collated this data so that the number of lice per fish is arranged for all 8,419 fish. The table below shows the number of infested fish carrying between 0 and 20 lice. 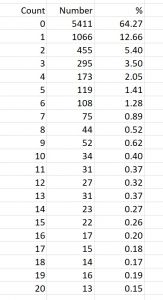 Most of the fish carried no lice at all. This equates to 64.27% of the sample. A further 1,046 fish carried just one louse. The number of fish carrying more than 20 lice (max 207) was 378 fish or 4.5% of the total. The number of fish carrying more than 10 lice was 587 or 6.9% of the total. More than 10 lice have been deemed by some scientists to be the lethal limit for sea lice, which means that the mortality rate would be 6.9% so it is inconceivable to equate this to a mortality of over 30% in over eighty Norwegian rivers as predicted by the model. 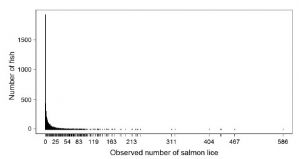 Helland et al. were looking at the best way to statistically fit observed data into the various models and they concluded that the actual observations didn’t fit any model at all. Instead, they proposed that only fish that were infested above 0.1 lice g−1 fish weight should be considered. My understanding is that this meant that most of the fish were excluded from the model observations. If this translates into the current estimates of mortality, then it is not surprising that Jansen and Gjerde considered the estimates of sea lice infestation to be too high.

The reality is that the majority of migrating post smolts have very low levels of sea lice infestation which could be explained by the natural sea lice life cycle rather than a connection to farming.

Wild salmon conservation has become too dependent on a small group of researchers who focus on mathematical modelling rather than looking at what is actually happening in the real environment.

I will be considering his issue in much more detail in the next issue of reLAKSation.